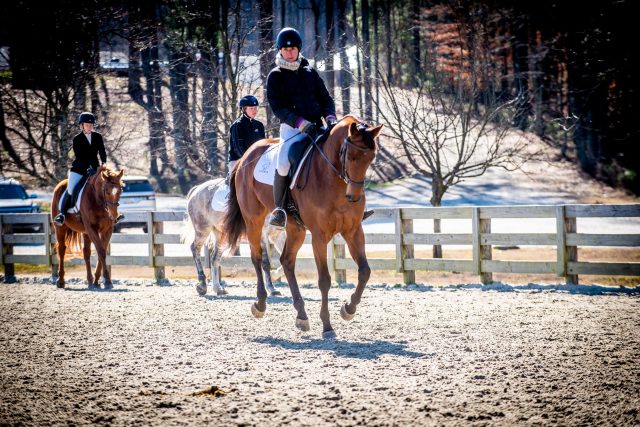 “The trick with showing in the early days of training is to keep your bar low – sometimes really low. ‘Stay in and stay on’ is a perfectly fine motto.”

Welcome to the next installment of Thoroughbred Logic. In this weekly series, Anthropologist and trainer Aubrey Graham, of Kivu Sport Horses, will offer insight and training experience when it comes to working with Thoroughbreds (although much will apply to all breeds). Come along for the ride as she discusses her logic on getting out and showing.

This past weekend, in a surprisingly chilly (read: bloody cold) snap for the Atlanta-region, I took three young Thoroughbreds to an Eventing schooling show at Chatt Hills (Bouckaert Farm). I didn’t have a ton of students showing, so figured this early-season competition would give the two total green beans, Cheese Whiz (RW’s Retirement, 2016) and Mountain (Mountain Holiday, 2016) a good chance to settle in and gain plenty of experience, while getting Rhodie (Western Ridge, 2015), my 2021 Retired Racehorse Project Makeover horse back in the game.

Before hauling out, I told a student, “Oh yeah, it’s going to be hilarious. If I stay on, I’ll consider it a significant win.” Yes, sometimes the bar is that low. That said, despite the cold and the comedy, getting them out was absolutely priceless. 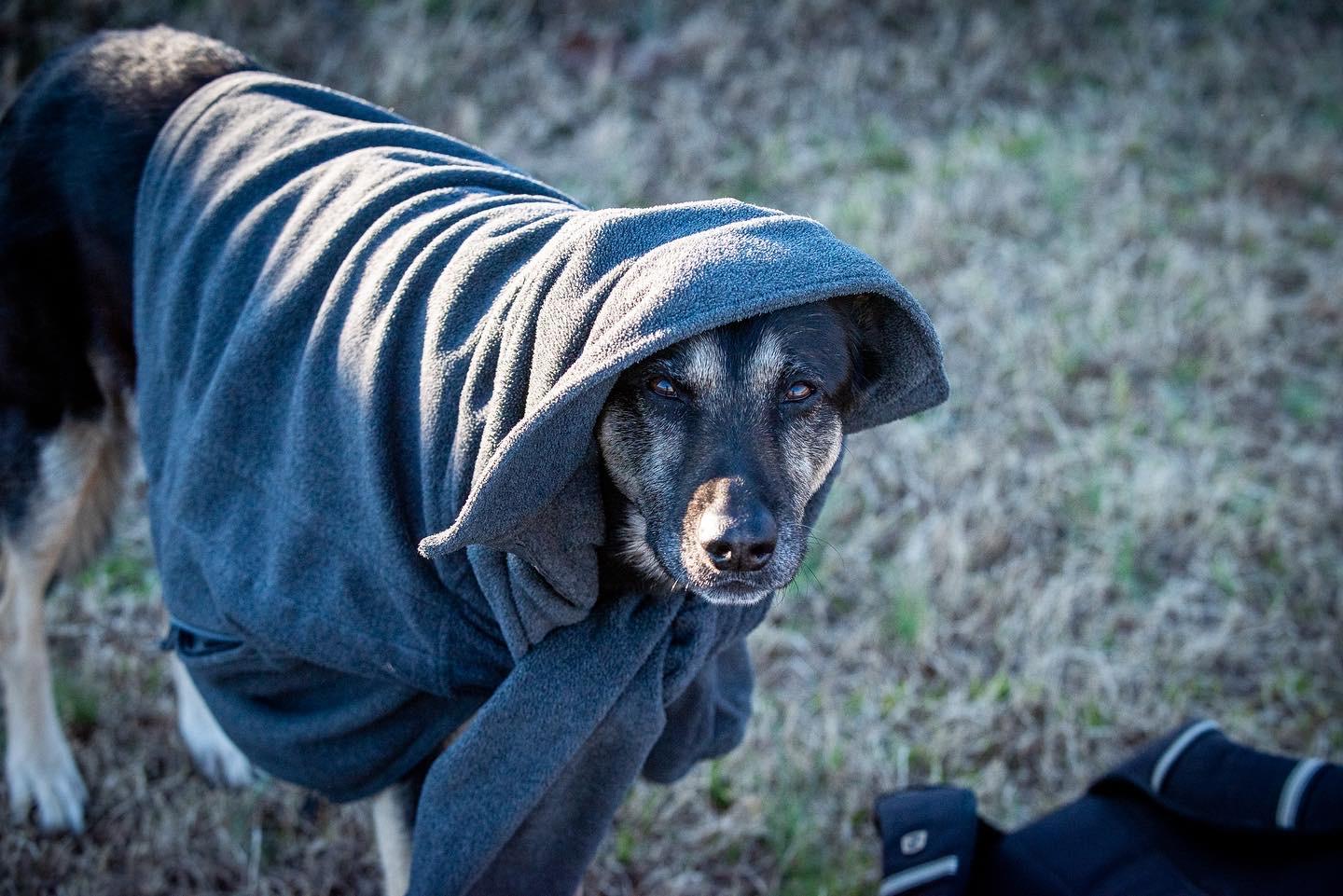 It was *this* cold — Walker, my side-kick featured. Photo by author.

“I don’t think I’m ready to show,” is an all-too-common comment among my students and friends. The same thought process also ends up applying to their horses, especially when dealing with the green off-track Thoroughbreds – “Maybe I’ll try to get so-and-so to a show in the summer… or maybe next year…” Or, “I’ll start getting them out if/when they’re ready for such-and-such a (elevated) level…”

Ready. That’s a hard one with humans and horses, let alone green off-trackers. You’ll likely never actually feel ready, but as I have written before (check out the blog on the same topic here), you probably should do it anyway. 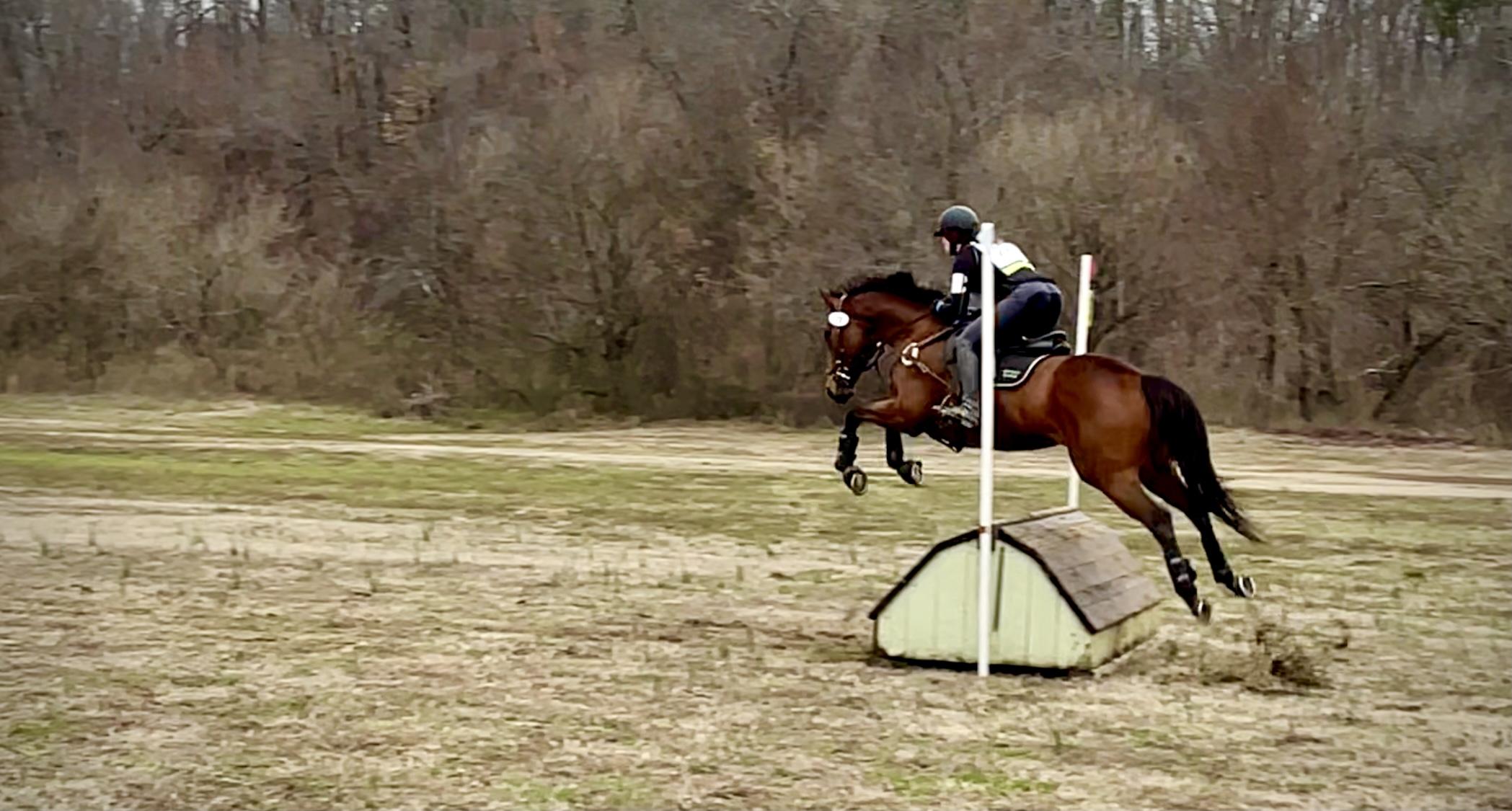 Rhodie (Western Ridge) was a bit of a dragon getting back out to school cross-country on the Friday before he ran a Beginner Novice Combined Training, but it was very much worth getting him back out. Photo by Shane Drake.

Showing can be about measuring success, but in my books it is way more about gaining experience and helping a horse increase their confidence in new situations. No one starts at the five-star level, despite that being the goal. Rather, as one works their way up and through, there are a lot of lessons to be learned and joy to be had in the meantime. So if you want to show and your horse is not entirely, completely, 100-percent feral, sure, let’s go. You’re probably far more ready now than you think (and yes, they are likely to still be semi-wild when you get there).

That said, choosing appropriate venues and classes is super important.

Schooling shows are awesome. They’re less expensive, come with inherently less pressure, and often offer lower classes for the green horses and humans. Moreover, you can go as a “non-compete,” just to get a horse used to traveling and seeing the new sights. If you choose to compete, there’s always flat classes, dressage, and low jumper (sometimes even ground-rail or cross-rail classes) and hunter rounds, ticketed schooling classes, etc.…the options are endless… 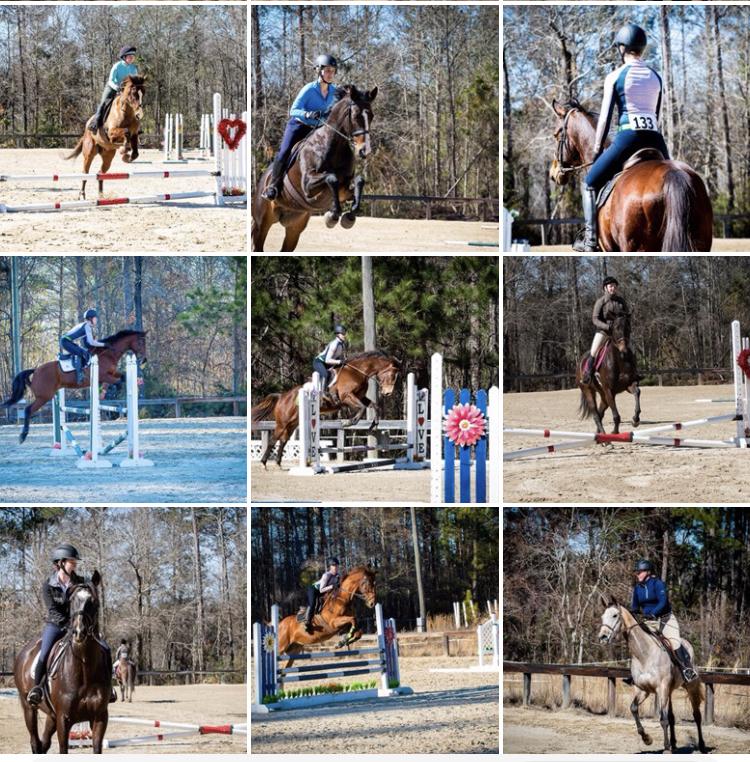 Students and green Thoroughbreds getting out and about at the first of the Big Cheese Eventing Jumper shows in 2021. Photo courtesy of author.

With my horses and my students, I honestly don’t care what they choose to do, so long as it is lower, slower, or reasonably comparable to what the horse schools regularly and comfortably at home. And regardless of the classes you enter or don’t, you can work in the warmup arenas and learn to grit your teeth, avoid the drunk-driving ponies and horse kites, and hopefully laugh through the chaos. 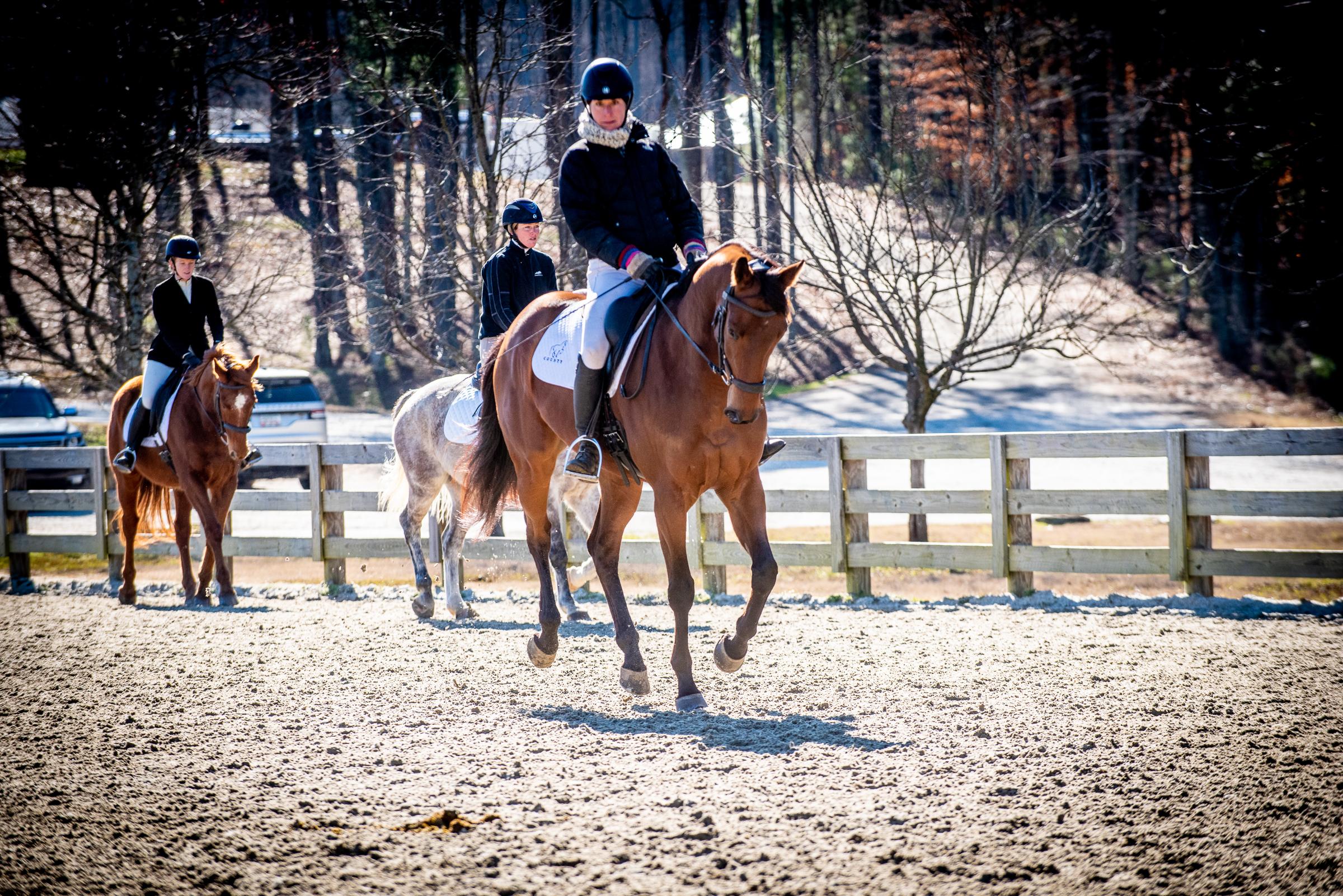 Rhodie surviving the cold warmup at Chatt this past weekend. Photo by Amanda Tozzi.

The trick with showing in the early days of training is to keep your bar low – sometimes really low. “Stay in and stay on” is a perfectly fine motto. I wear my sticky breeches and make sure that my saddle is recently oiled so I have better grip, and then I simply aim to have fun and see what they make of all of the new stuff.

This weekend was a perfect example. See, despite the 25-degree temps and crazy wind that made it feel like we were skiing, Cheese, Mountain, and Rhodie all exceeded my expectations. I am positively bursting with pride for these kids and cannot wait to get them to the next show at the end of the month.

Mountain Holiday, one of my Retired Racehorse Project 2022 Makeover hopefuls, has been rehabbing his utter lack of sole. After spending over four months in a stall, he came out with the same good brain he entered with. Quiet, friendly, and playful, Mountain has been focusing on his flatwork … and growing. Coming in at 17.1, his butt is a good two-inches higher than his wither; I’d quite prefer if that growth occurred in the front half of his body, thank you very much. Right now, he feels like riding a child’s slide. 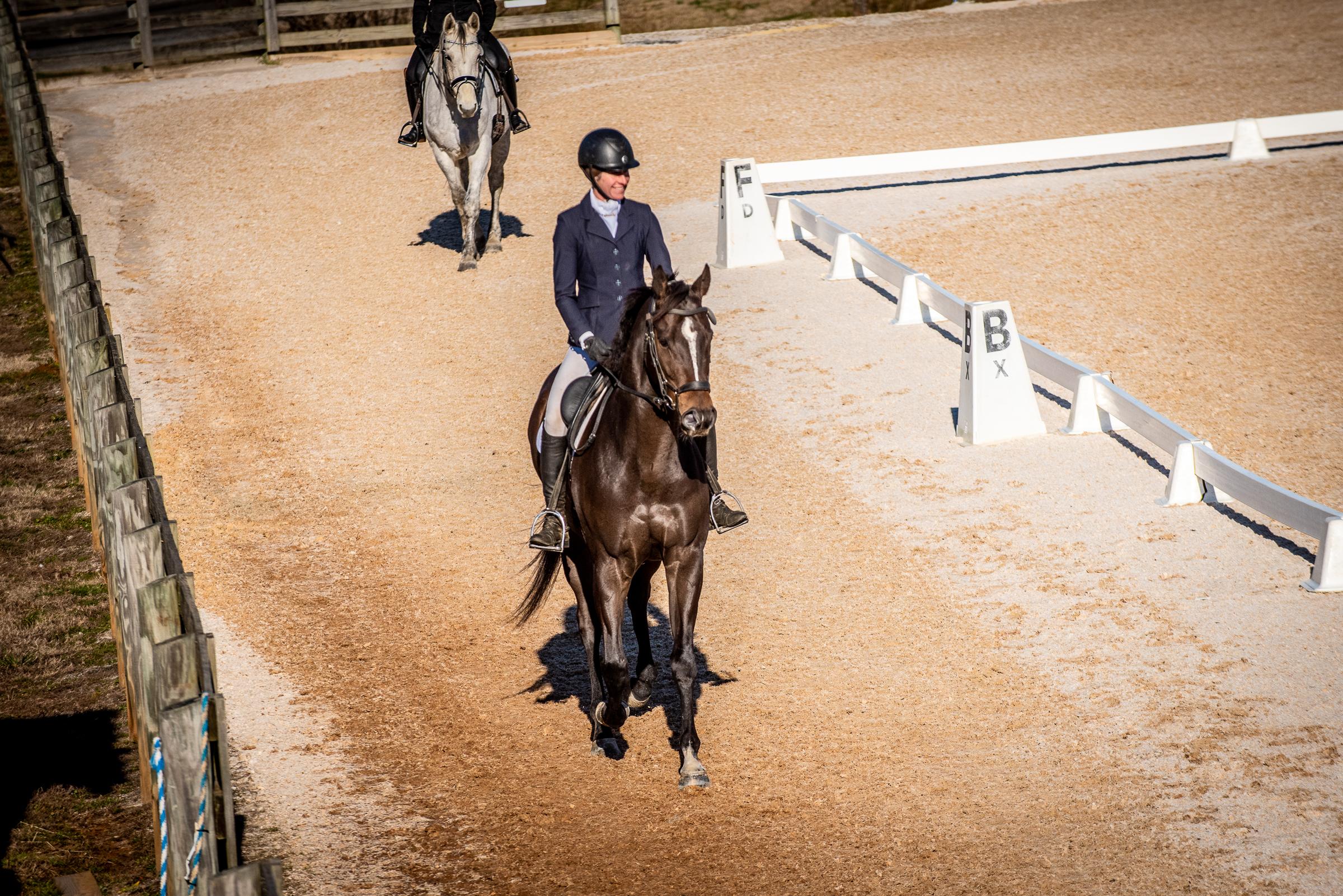 Mountain heads past the judge for his first dressage test. Photo by Amanda Tozzi.

Mountain is such a joy to have around that I decided he could come along to any show that I have a spare spot in the trailer. Mind, I have not started jumping him, and he had never left the property since arriving in April. So I hemmed and hawed about taking him as a non-compete or doing a dressage test (the difference was a whopping $10).

Ideally, I would have liked to have gotten him out to school inside a dressage arena before competing. But if I waited until situations were ideal, it’d be rare if any of these kids would ever leave the farm. So introductory level dressage (Intro C – walk, trot, canter) it was. I was just hoping he’d stay in and manage getting through the corners… and the halt at x. Note, I love dressage tests for the clearly written comments that point to “here is where you need to focus.” 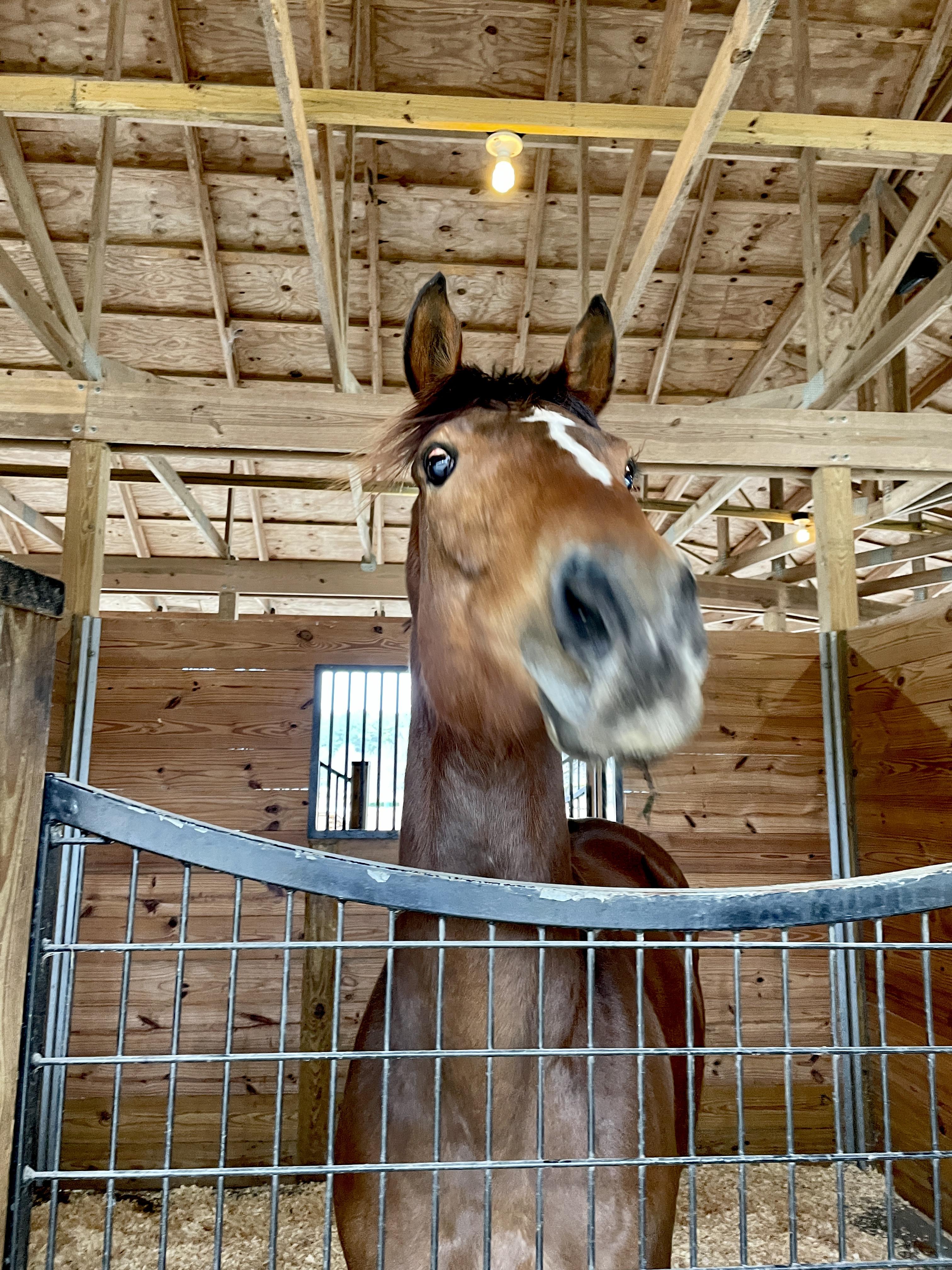 Cheese showing his feral side in the show stall. Photo by author.

Friday was stabling and schooling for all three horses. Mountain walked into his stall and settled into his alfalfa. Rhodie looked at me like, “This, again?” and went to sleep in the back of his box, and Cheese lost his mind. He spun and screamed, worked up a lather, and generally lost it. There’s always one. That behavior meant he needed to go move his feet. Despite becoming a whirling orangutan, he had to be the first out — jumping some cross country and galloping the fields would help make the stall less stressful.

I knew that bringing Cheese was a gamble. We have scraps and shreds of his history: A couple of way-too-slow races, a supposed eventing barn, a Texas kill pen, and then rehab at the amazing Lois Lassiter’s farm here, and then into training with me. Cheese has been a tricky restart, and still rides a bit like an ADHD pinball in a machine operated by a sugar-fueled 11-year-old. But every ride has brought progress, and in the process his jump has become impressive without being explosive. 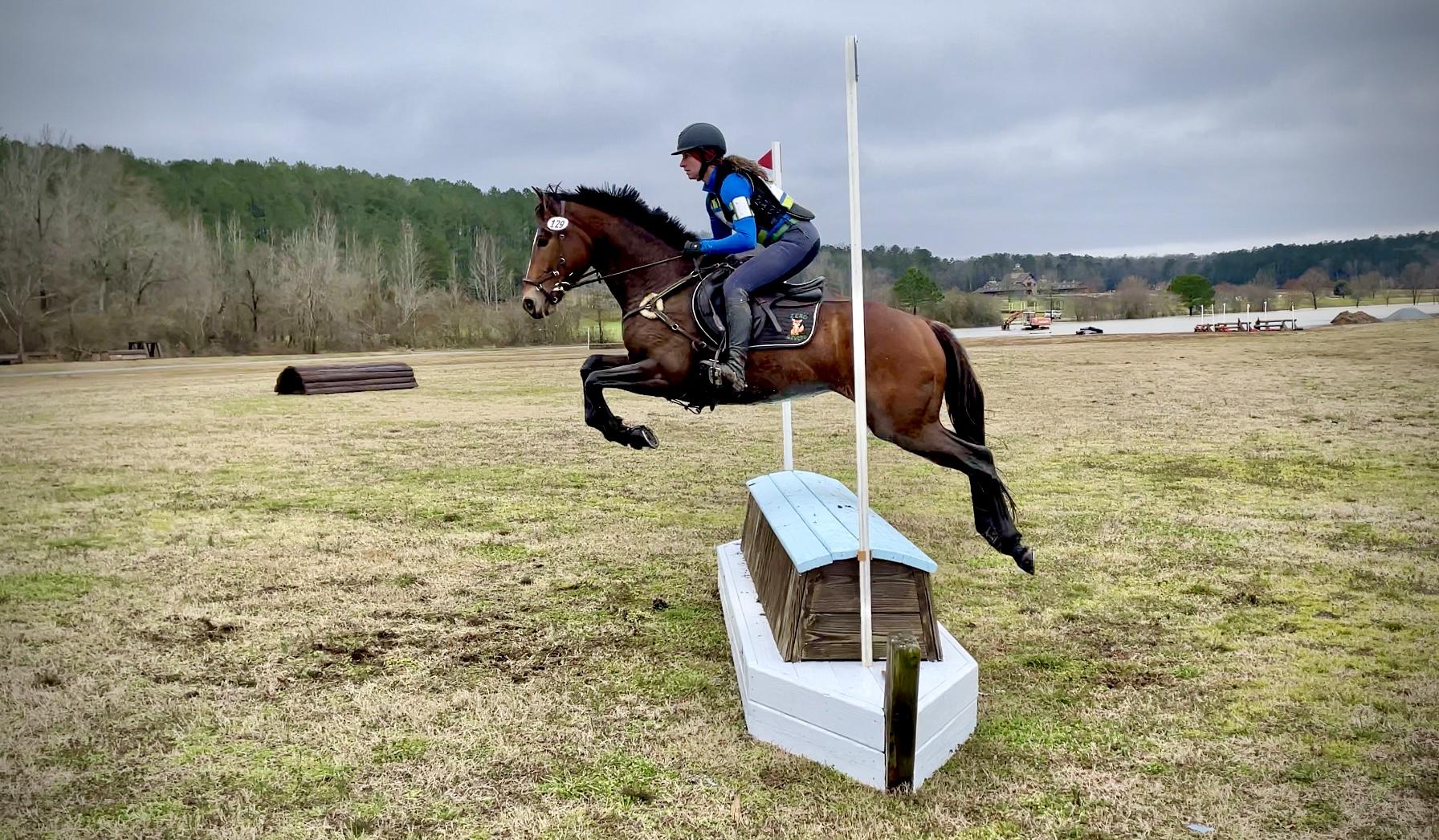 Unlike Mountain, Cheese was definitely not a candidate for dressage. He is all talent with fences, but when rattled on the flat, still head-bangs, runs sideways, is largely still somewhat feral. Give the kid jumps, and he is 110-percent focused. Brave, unflappable, and game just start to scratch the surface. So, while Mountain donned the long-stirruped get-up, I shortened my jump leathers and took Cheese out XC schooling on Friday and then ran two, two-foot jump rounds the day of the competition.

Friday’s schooling settled Cheese down. He eventually cantered around the cross-country fields on light contact, took the necessary deep breaths, and then jumped gamely through the Tadpole and Beginner Novice options in a field that was impressively wet. After the cross country and stadium schooling, he was still amped in his stall, but as I oriented the other two Thoroughbreds to the farm and arenas, he settled in and remembered how to horse. 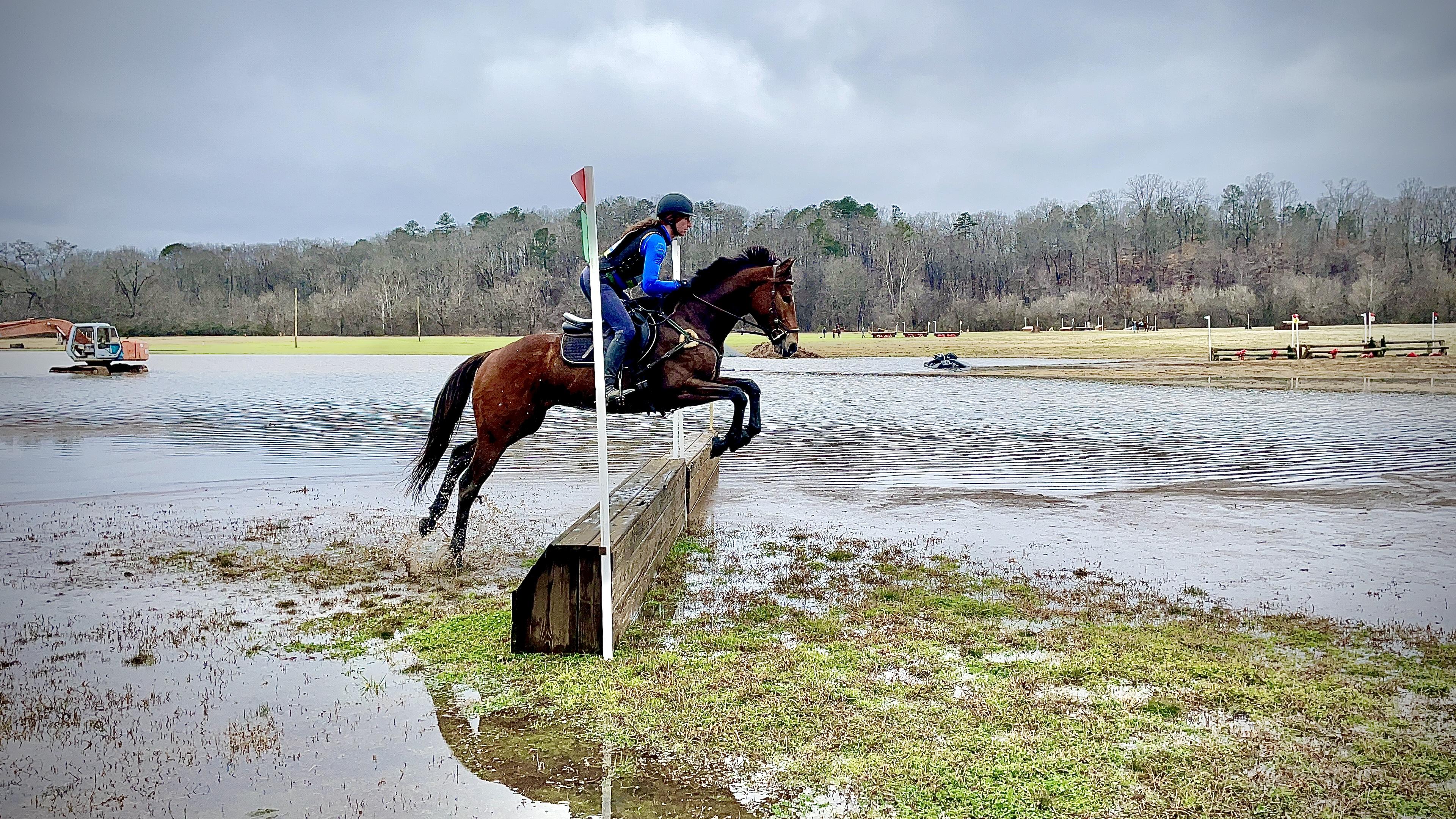 On Saturday, in the blistering wind and clear-day cold, most of our competition day was about surviving the warmup arena. For Mountain, the walk was not there initially, nor was the trot. But, as we toggled our way up the gears, I found that he had a very controlled canter – so after check in, we did that for 10 minutes. Circles, change direction, try the trot… see if he settled. He eventually gave the trot and then the walk. When he got in the dressage arena, he laid down a test that was imperfect but totally and perfectly OK. 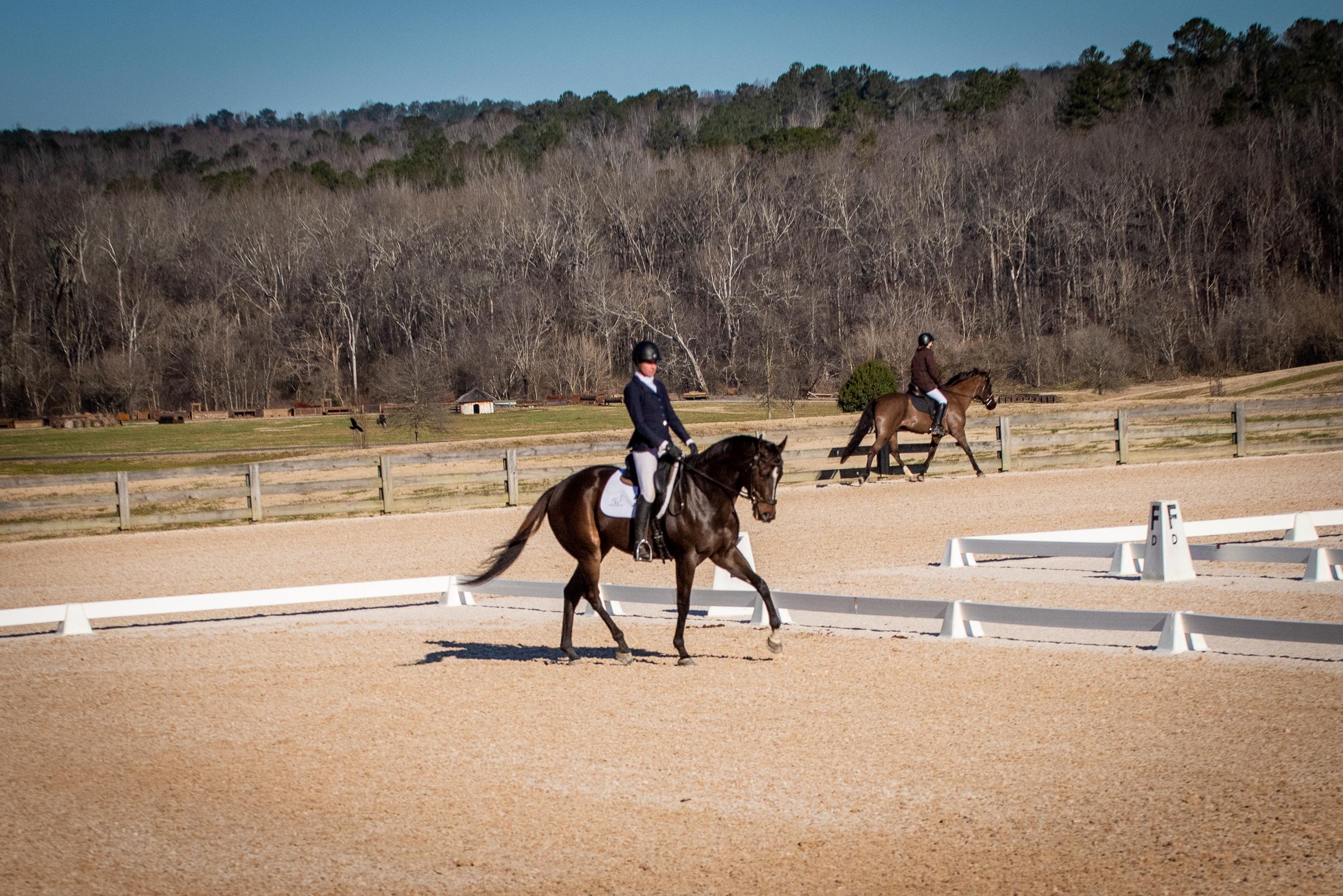 Sure, we came out of our frame from time to time, and we drifted far right on our final halt, but he was good. Like really, ridiculously good. Mountain tried. He stayed in and I stayed on. And that folks, for a horse with less than two months of solid training, was success in my book. Now time to raise the bar a little and train up for the next outing.

With Cheese, his warm-up was excitable but not stupid. His rounds were more than perfectly fine, and as with Mountain, I’m thrilled. Here’s his green-bean first stadium course:

Yep, we have plenty of homework on turns, changes, and settling out the head-banging. Still, I’m writing this positively psyched about his quiet-ish bravery. Cheese, you have big things in your future. In the meantime, we’re keeping that bar low and aiming for a 2’6” round or two for the next show, while I work to get the dressage in order well enough to do a Beginner Novice Three-Phase.

In the end, my three Thoroughbreds loaded on the home-ward trailer having grown up just a little bit more. Their behavior and performance at Chatt not only set the bar for the next show, but also directed our homework and goals.

So for those taking OTTBs out to their first shows, my parting advice is to treat it like the training that it is — like just another Saturday of new experiences. And I highly recommend going even if you don’t think you’re ready — just stay in and stay on. And maybe also ensure that whatever level of feral they come out, you can still survive warmup. Good luck and happy showing.