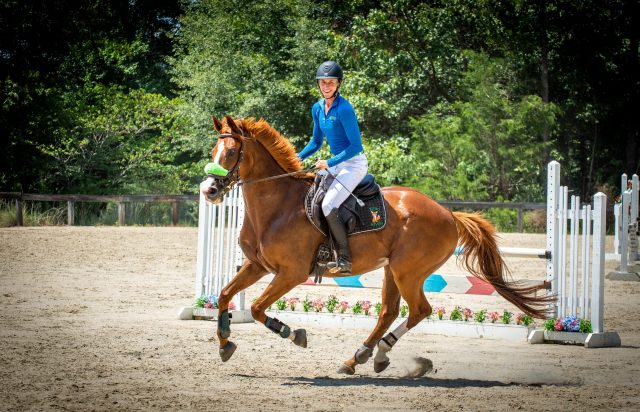 We are excited to announce a new training series from Anthropologist and trainer Aubrey Graham of Kivu Sport Horses. In this weekly series, Graham will offer insight and training experience when it comes to working with Thoroughbreds (although much will apply to all breeds). Come along for the ride as she discusses Thoroughbred Logic.

I am an Anthropologist but my everyday is taken up as a full-time horse trainer and lower-level eventing coach. I happily train all types of horses, but it is undoubtedly the Thoroughbred that I love. I owe that affection and conviction to their intelligence, their heart, their drive, their sensitivity, their goofy quirks, and their often-brutal honesty. 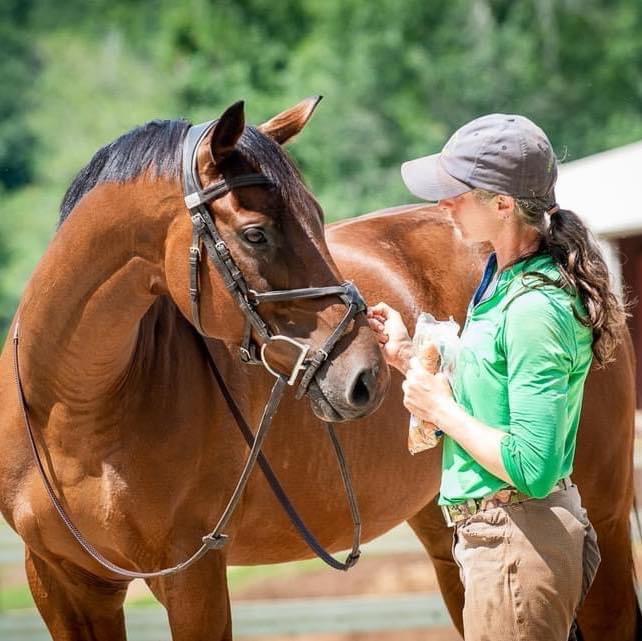 Each year, I have the privilege to contribute to the training of more than 50 Thoroughbreds. For some, I get to hop on for their first post-track ride. For others, my role is part of their longer process of discovering (and training for) appropriate second careers. For a handful, I get the pleasure of riding to provide further education and show experience. And then there are those who arrive at my farm for me to address significant behavioral issues.

In all cases, I play a middleman. I translate horse to human and back again. Regardless of whether I’m communicating with potential buyers, owners, students, clients, or friends, there are enormous similarities in what I end up explaining. 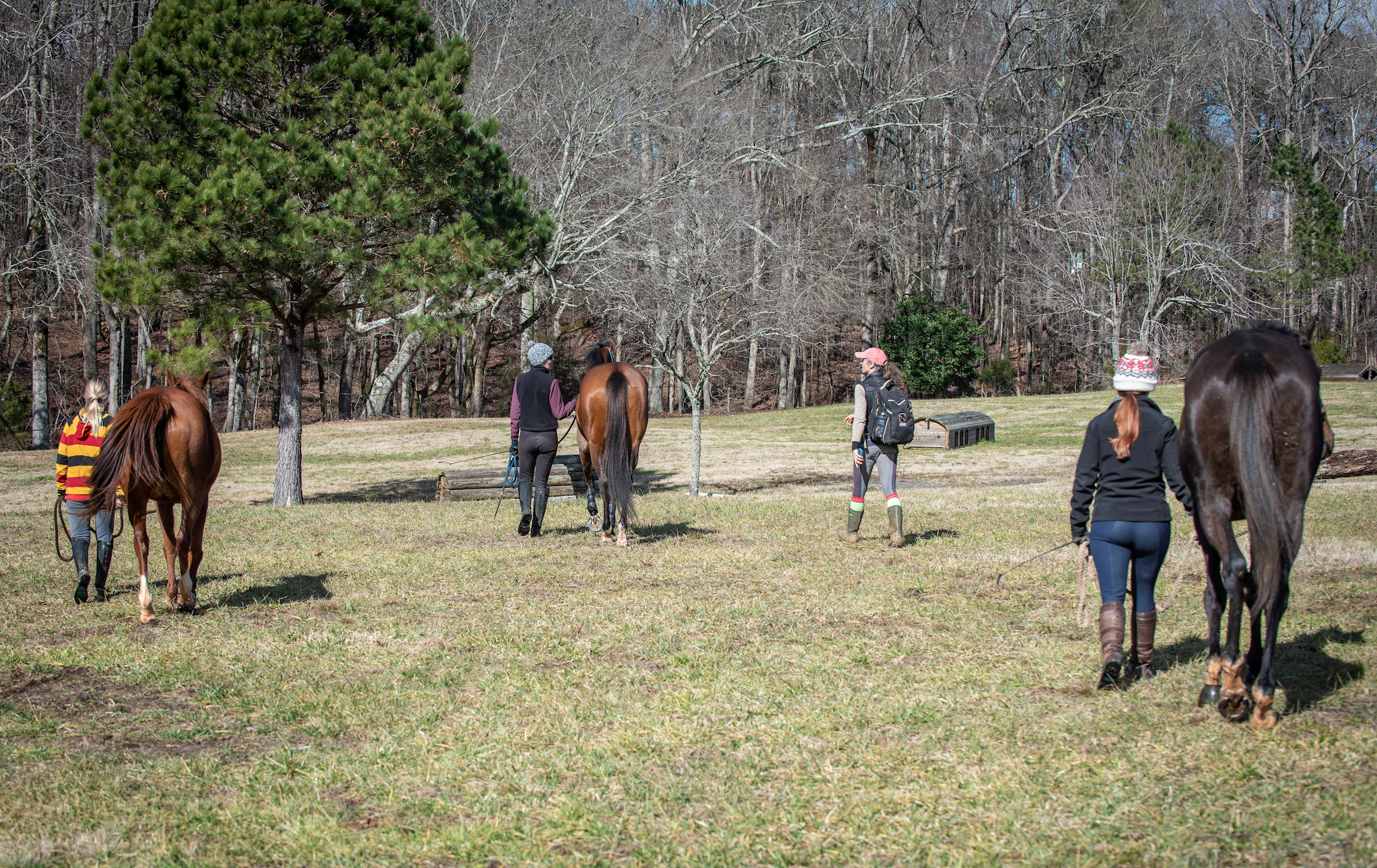 I figured I’d share some of those stories, thoughts and insights here. Importantly though, what I write, say, and enact is one path among many, many, many other ways to engage these horses and topics. It is how I choose to ride and train, and all of it is built from my experience and the horses with whom I have spent time. I’m certain there are innumerable other means to do so… and that is exciting, because that is exactly why, with horses, we never stop learning.

Week One: Comedy and the Thoroughbred

To kick off this series of 52-written pieces on Thoroughbreds (unaffiliated with the 52-Free Thoroughbreds, of course), here’s a bit of backstory and some commentary on the essential role of laughter at my farm.

I didn’t come into Thoroughbreds particularly intentionally. I rode a few as a kid, and once I outgrew my 12.3-hand Welsh Mountain Pony “Snowy,” aka Spawn of Satan, I ended up owning my first OTTB (Off-Track Thoroughbred)

The better backstory here is that my super cute white pony was a hellion with a thick-ass mane that we had to roach on the right-hand side to braid it over for shows. There was no pulling it as the last time anyone tried, this thing was rumored to have delivered two hooves to a grown man’s face providing no fewer than 80-stitches. Or at least that was what I was told. 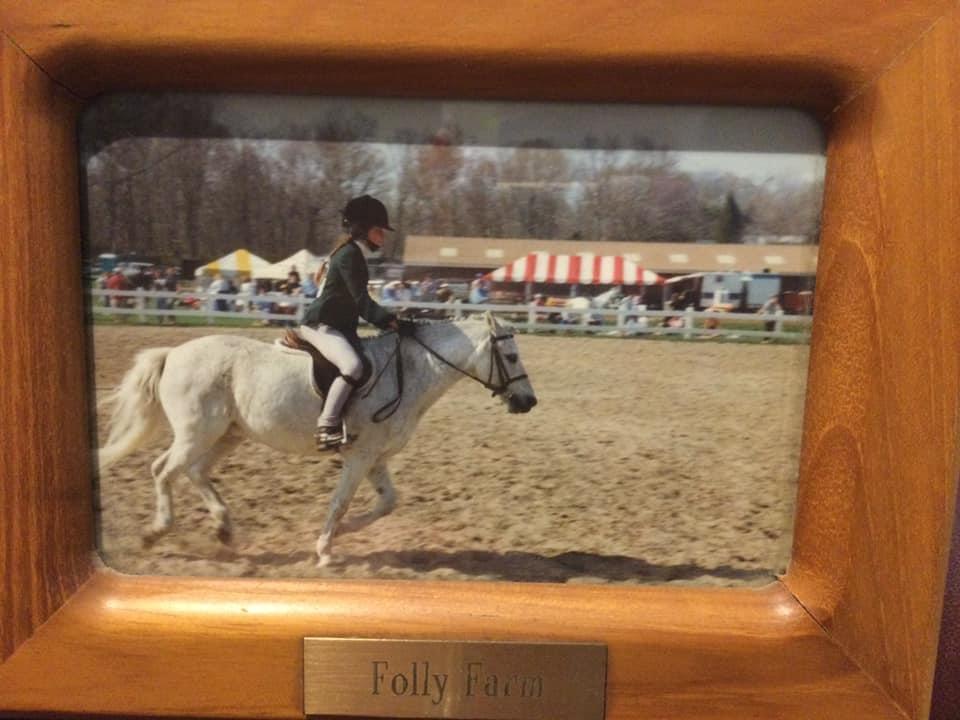 Snowy at Folly Farm in Connecticut, circa 1991. Photo by Pamela Graham.

Satan pony paraded as a saint at shows but had a serious buck at home that took my eight-year-old self six months to learn to sit. When I finally stopped hitting the ground, it became fun. Somewhere between eight and nine years old, I learned the habit of laughing at “bad” behavior. I might be 30 years older now, but that part hasn’t changed a bit.

My first Thoroughbred was a 16.2-hand, dark bay 19-year old gelding, JC Bold Sailor. I first met him in a dimly lit backyard barn when helping to teach Snowy’s next young owner how to sit those bucks. That day, we had tested her stickability on trails; in the process, we rode over to a friend’s farm. Turns out that said friend’s parents had recently purchased her a former racehorse.

Sailor might have had been off the track for more than 15 years at that point, but he was still impressive. He definitely had his new owner mildly terrified. I can’t remember why I didn’t bother putting a saddle on, but I convinced her to let me ride him and hopped on bareback. As I hacked him around, I laughed at his antics like I laughed at the demon pony. A few weeks later, I purchased him for a whopping $850. Fast forward way too many years, and my high school boyfriend ends up marrying that same girl. I’ll skip to the end on that one – nope, she still does not like me. 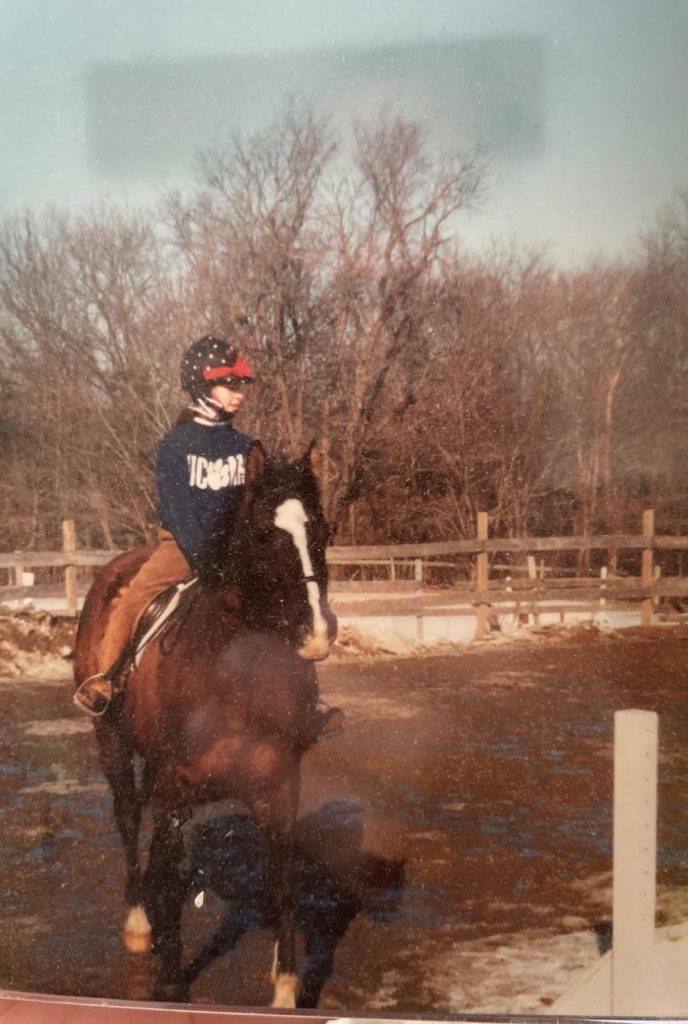 I remember being nine and riding Sailor on those first fall days, when the chill in the Connecticut air transformed horses into kites. He’d bolt through canter transitions and I’d yell “incoming” to the other boarders in between bursts of laughter while he sprinted down the long side. It all worked out — he earned the laughter, and I learned to ride.

Two points that are worth drawing from that story are the concept that not all good horses are good matches for every rider, and that a “special” sense of humor is central to how I train and enjoy Thoroughbreds. I’ll talk about match-making a ton in this series, so for now, the comedy.

Laughter, as far as I’m concerned, is appreciative and unaffiliated with fear. It takes a situation from serious to playful. From, “you have got to be f*cking kidding me” to “nice try, goober.” With laughter comes patience, appreciation, and the potential to shape, not just correct, behavior. 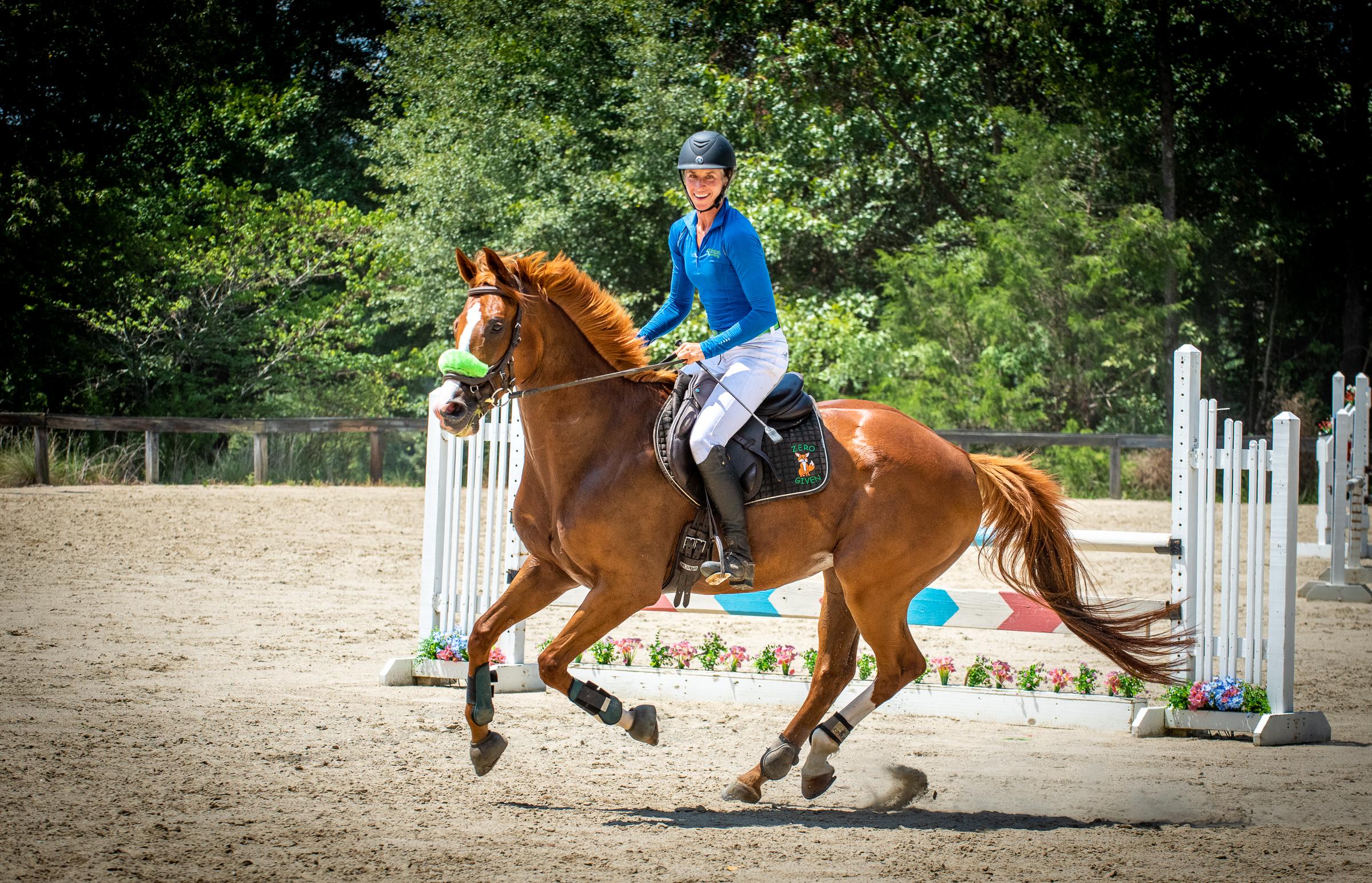 Crafty Charger is one of this farm’s more sensitive rides and laughter is essential. Photo by Alexa Wegner.

Monday morning with my upper-level hopeful Rhodie (JC Western Ridge) and talented Texas kill pen rescue Cheeze Whiz (JC RW’s Retirement, owned by Lois Lassiter) makes a fine example. Going out in the fresh 35-degrees, they danced on loose lead lines without pulling. Flicking their heads, tails up, they “behaved” in theory, but held it together only by a thread. And the whole way to their field, I laughed at them. Neither crossed the ‘rude’ or ‘dangerous’ threshold, so they earned their comedy and their turnout. 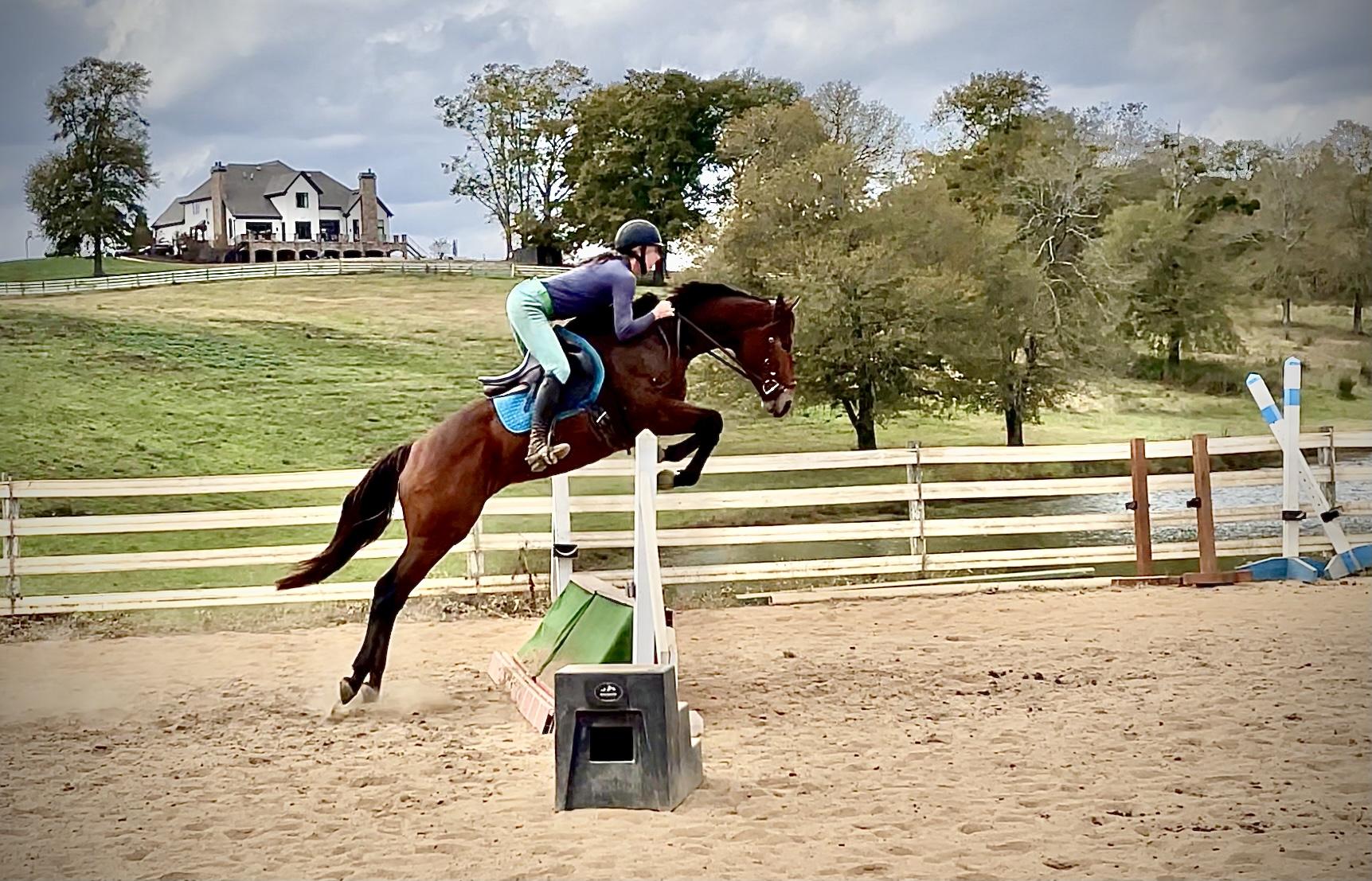 Cheeze Whiz earned a good bit of laughter for his first attempt at the wall. At least we know he has plenty of scope. Photo by Shane Drake.

That’s an important line to draw out clearly, though. Such appreciative laughter goes out the window when a horse is legitimately rude or dangerous – rearing, striking, intentional biting or kicking, ripping out of the halter, or very much aiming to put you on the ground – are full blown “no’s” in my barn and often require investigation into the root causes of the behavior. Such situations are generally not funny until you’re telling the story of how you survived them later over a few well-earned drinks.

It works the same way under saddle. Friendly, goofy bucks, too much speed, an honest misunderstanding, or general enthusiasm earn laughter. That comedic response is then coupled with riding that aims to be soft but confident in order to shape the “try” of the goofy behavior into a more correct response. 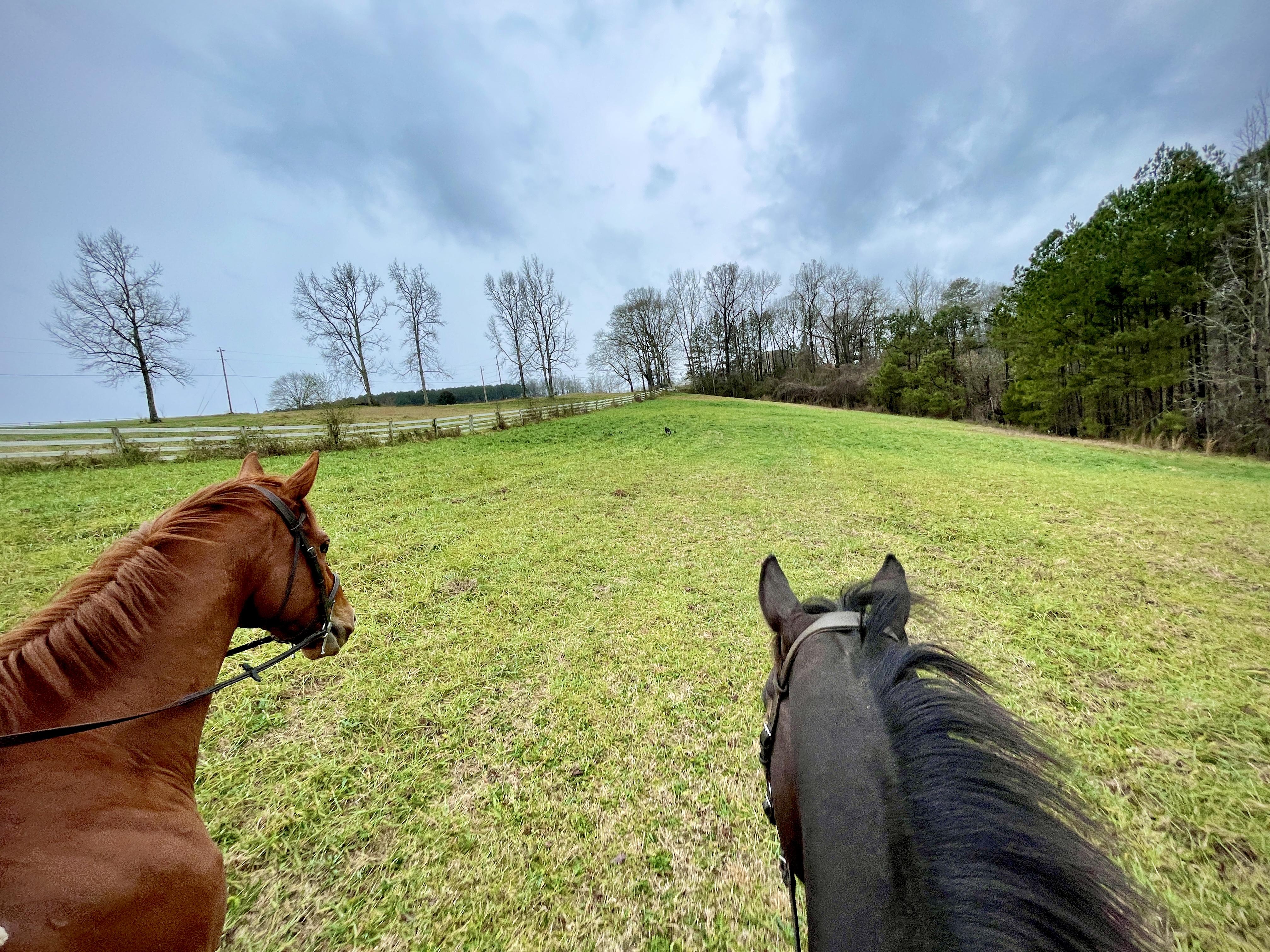 Mountain out on a trail hack with Forrest on New Years day. Photo by Aubrey Graham.

Riding Mountain Holiday (this year’s Retired Racehorse Project’s Thoroughbred Makeover hopeful) on his first trail ride to ring in the New Year, I kept laughing through, “no, no, no, do not buck me off… go forward, get that good trot.” It is worth noting that Mountain just graduated four months of stall rest. On the short trail hack, he was not perfect at all, but he was good – well, funny, and goofy and full of enthusiasm and try. And that is the beauty and fun in all of this. I will take that type of “good” any day.

Okay, Okay. You might have gotten this far and started to wonder that this has to do with Thoroughbreds in particular. As far as I’m concerned, all horses of all ages and training warrant the long leash that laughter encourages. That said, when transitioning horses from the track to their riding career, the road to progress, competition, and success is rarely a straight one. 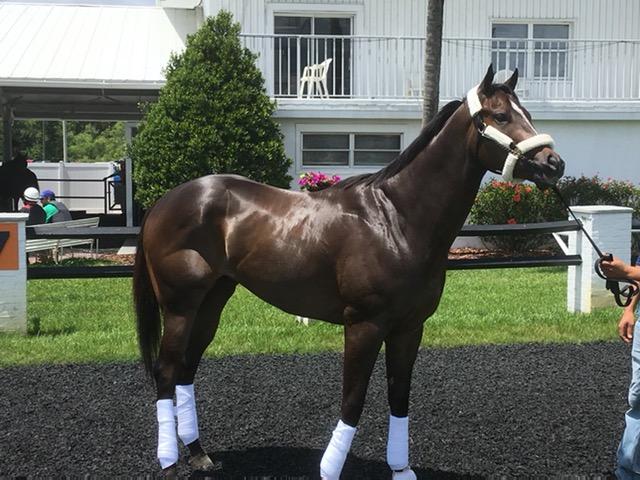 On-track Thoroughbreds know a lot. They know their race job and their stall, training routines, and life at their trainer’s farm. They know jockeys being tossed onto their backs while they move. They know to fast trot around the track and how to break into a steady, balanced gallop. They know that a rider leaning forward and holding tight indicates a request to go faster. They know what they have been trained and a lot of the rest is new and (despite innate Thoroughbred intelligence) potentially confusing.

Race training ranges wildly – I have had more horses here who know how to carry themselves over their back, move away from leg pressure and have lovely ground manners than not. But I have also had a few in (ahem, Cheeze, Arty… I see you), who appear to have never been trained to do anything but blast willy nilly out of a gate. Consequently, with 18 OTTBs currently at my farm, a sense of humor is nearly as important as a good seat. 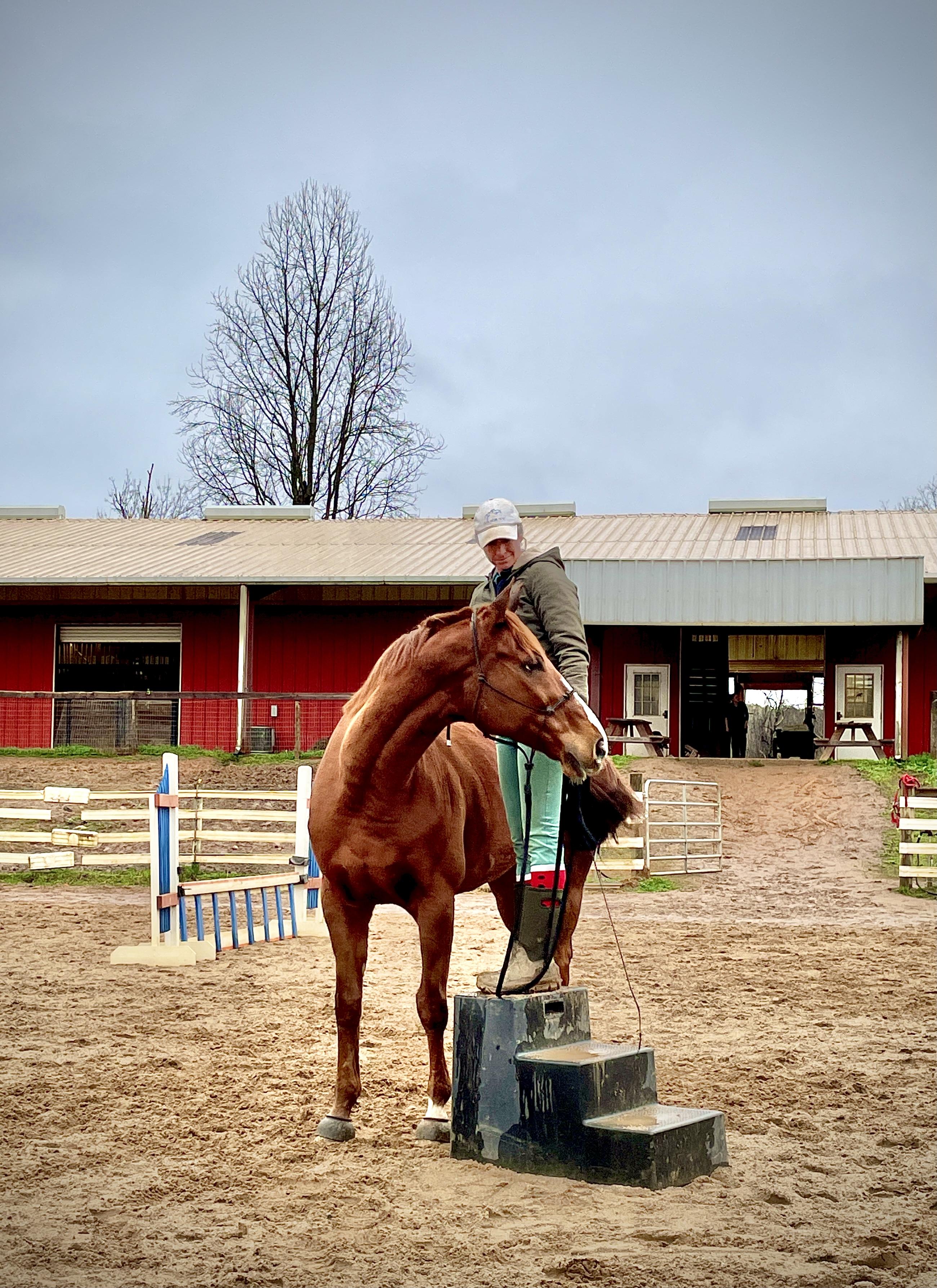 Seeker (JC Hot To Seek Her) is a warhorse who knows his race job well. Here we pause to train the mounting block slowly, as he seems to think that his job does not require the ridiculous request of standing still while I am taller than him. He’s making progress and I’m super excited about his future. Photo by Audrey Mecklenburg.

The takeaway is this: Recently off-track horses have answers to many of our questions – that said, those answers happen to be geared for a different career. Laughter and its ability to open space to shape behavior sits in opposition to irritation, frustration, and hasty correction. In theory, laughter, like a good seat and soft hands, is one tool in the training kit which encourages the Thoroughbred to want to keep trying as they transition into the unknown landscape of a new job. In the process, combined with clear communication and boundaries, they learn essential expectations and skills while gaining a mindset that is brave and excited to tackle the challenges of their off-track life.

Sure, you can absolutely do all that without laughter, I suppose. As I said, there are a million different ways to train. But from this where I sit, that just doesn’t sound like nearly as much fun.