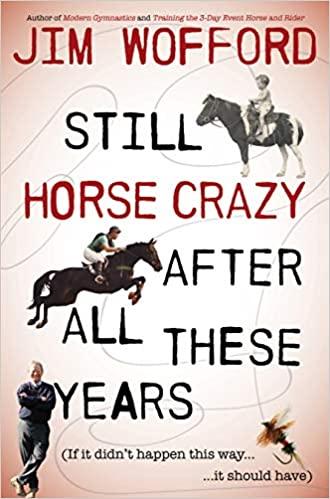 “This book is basically a walk through the past several decades of eventing history, led by a legend who’s lived it. The reader is along for the ride as we see the highest of the highs, lowest of the lows…”

As an eventing fan, horse history nerd and avid reader of Wofford’s Practical Horseman columns, I knew I’d be adding this to my ever-expanding collection of horse books as soon as possible. It took longer than I anticipated to finish but that’s on me and my tendency to read too many books at a time rather than Wofford’s writing!

“Still Horse Crazy After All These Years” is a fascinating trip not only through Wofford’s life, but through the history of eventing during a time when it was just beginning to grow into what it is today. With how many roles Wofford and his family played in equestrian sports, the reader gains some interesting insights into how the sport’s governing bodies have functioned, how the sport evolved from the later part of the cavalry days into a civilian sport and the development of what Wofford terms “destination events” (e.g. LRK3DE, then known as Kentucky).

Most interesting to me was how Wofford noted the ways the sport has changed for the better. Personally, I feel there’s a certain subset of equestrians who put the nostalgia goggles on and become convinced everything about their chosen sport was better in the Good Ol’ Days – this is by no means a phenomenon exclusive to eventing, but I feel like it’s prevalent in eventing, specifically because of the issues the sport faces today. That’s not to say eventing is universally perfect today or universally bad in the past – it’s not that simple and never is that simple. I appreciate the book for keeping it real. Probably the most striking example of the Wofford’s keeping it real, which illustrates how far the horse world, generally, has come, is the story of Paddy.

Paddy (Castlewellan) was one of Wofford’s horses during the early 1980s. He was warned when he bought Paddy that the horse was prone to “fits” and would have days where he just did not want to work, would rear up, etc. In hindsight, Wofford believes the horse may’ve had a neurological condition, but veterinary medicine wasn’t quite sophisticated enough yet to diagnose that. Wofford realized over time that Paddy’s issues were pain-related and discovered that if he worked Paddy for shorter intervals, these incidents happened less frequently.

One other point that struck me as interesting was what Wofford described as the increasing professionalization of the sport and the effect that has had on improving, in some ways, the overall quality of eventing. There’s a paragraph late in the book where Wofford discusses his own retirement from competition and says he’d observed that when cavalry officers retired, “they did not open up boarding and training facilities or begin teaching lessons and clinics. It just wasn’t done in polite society,” and goes on to note that while professional coaches like De Nemethy or Le Goff were praised, the sport “subconsciously looked down its nose at home-grown professionals.” Wofford then explains that before professionals were allowed to compete in the Olympics, most of the riders, who were amateurs (i.e. they weren’t technically paid to ride, though nearly everyone found loopholes/workarounds), were “living a compromise that gave us the worst of both sides – not very good at riding and not making much of a living in the outside world. Thus, U.S. horse sports were stuck in a sort of Catch-22: we couldn’t make a living with horses as a profession, so there were no professionals. Because there were so few professionals, each generation was bound to repeat the mistakes of their predecessors.”

As a reader, I knew that yes, riders had to be amateurs/find a loophole and compete as what Wofford describes as “shamateurs” to go to the Olympics back when, but I found his point about how professionalizing the sport ultimately upped the quality interesting and not something I think many have realized/thought about.

This book is basically a walk through the past several decades of eventing history, led by a legend who’s lived it. The reader is along for the ride as we see the highest of the highs, lowest of the lows and there’s so much more I could probably say about this book but I’ll leave it at this: if you have any interest in eventing, in the sport’s history, in equestrian history, generally or just want a good read, get this book. You won’t be disappointed. I look forward to re-reading it sometime when I’m not constantly reading multiple books at a time!