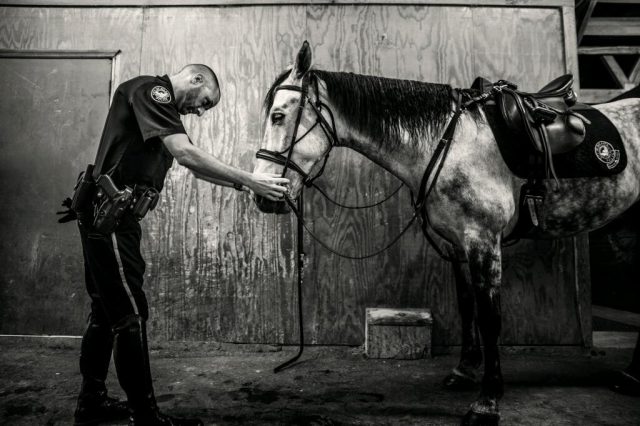 “At 42, there is finally no more embracing ‘the suck,’” explained Navy Veteran, Ryan Hinkle. “I no longer wake up on Monday and say, ‘shit, I have to go to work’… now I wake up and say, ‘cool! I have to go see my horse.’”

Ryan Hinkle is currently an officer in the Atlanta Police Department’s Mounted unit, located in Grant Park. His assigned horse, Cody, is a 16.1 hand gray Tennessee Walking Horse. Cody is the lowest ranking in the herd. As the newest arrival to the 10-person unit, Hinkle can commiserate. In this case, pairing green with green hasn’t been a bad thing. 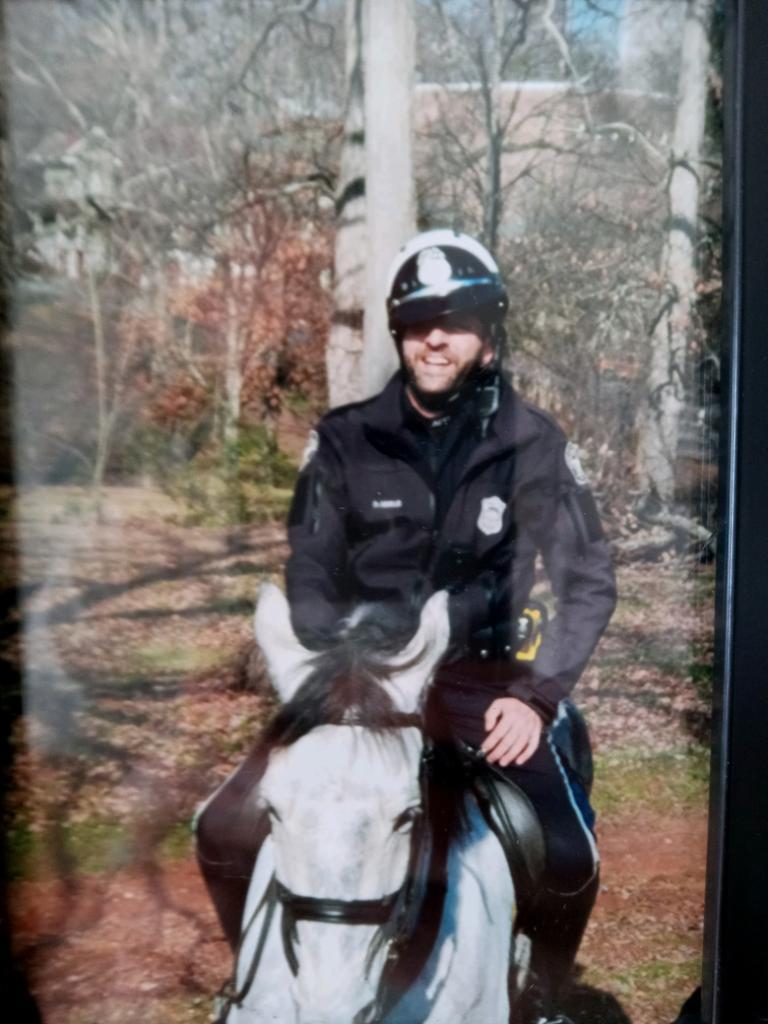 “It has been awesome building a relationship with him. As he started to realize that I was his rider, our connection changed. He’s the bottom in the chain of command, so he’s the last to come in from the field. But if I go out there to get him, you’ll see his ears come forward and he’ll inch his way to the gate. I take him in first. And now, once he’s in his stall and he hears me coming down the shed row, he’ll pop his head out because he knows I’m going to go come by and pet him. I can tell even now that we’re still developing the relationship to where he’s trusting me more.” 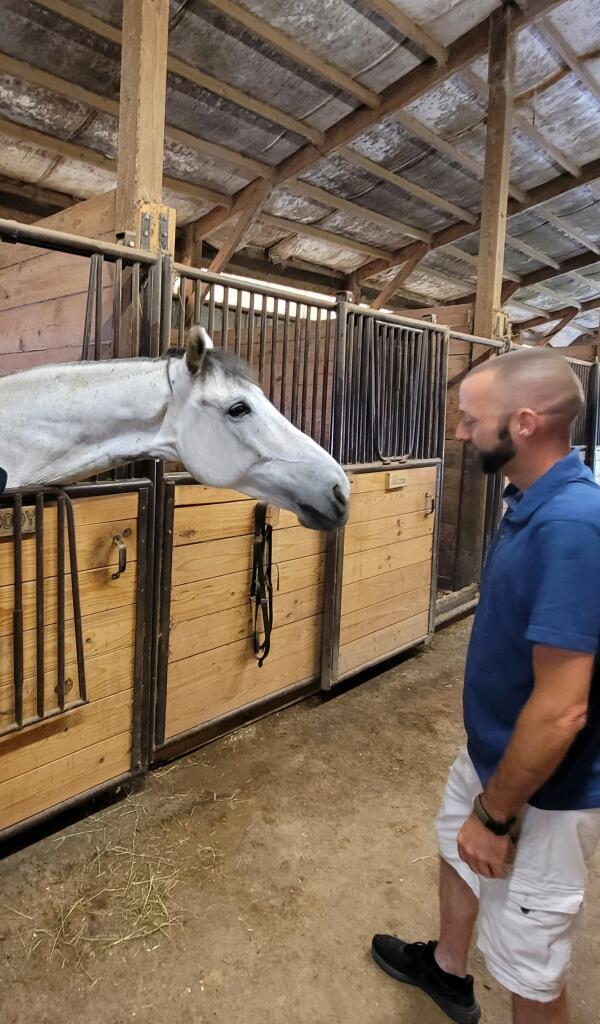 Hinkle, like many veterans, joined the military shortly after graduating high school. His Navy assignment placed him in Aviation Ordinance – in common parlance – he was charged with assembling explosives. He embarked with the USS Enterprise and learned, in his words, “to embrace the suck.” 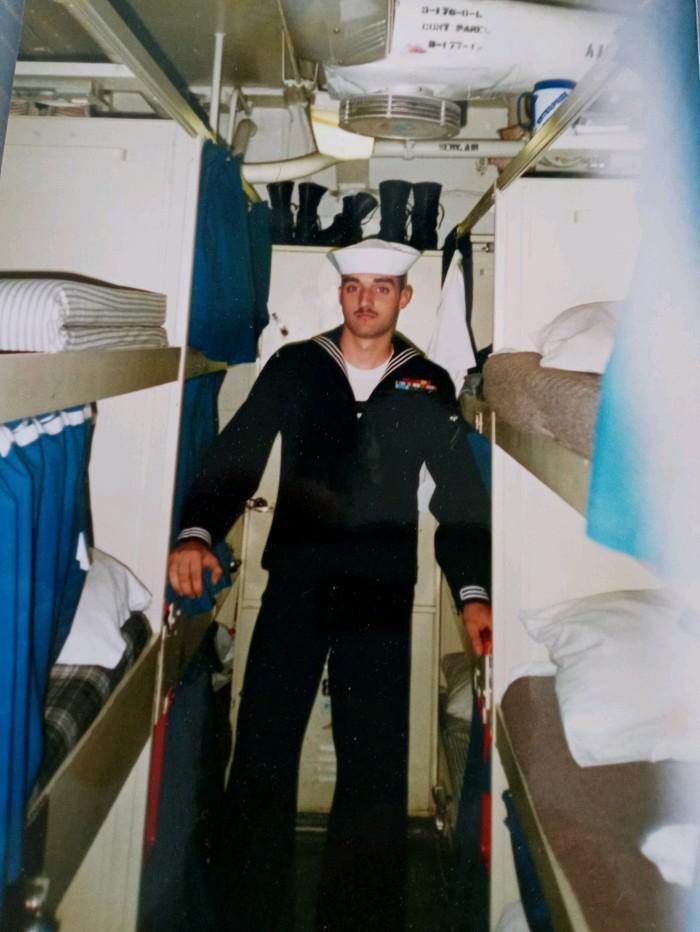 “Being on a modern Navy boat was not dangerous, it just sucked. This wasn’t WWII with its big Naval battles – it is just a 12-hour work day seven days a week. Miserable becomes your normal. You go, ‘oh, this sucks, but whatever.'” For instance, on a six-month cruise off the coast of Iraq, they were supposed to dock at a port every couple weeks for a few days off of the ship. That deployment saw port after port canceled. Hinkle was deployed for 181 days, and 167 of those were spent at sea. 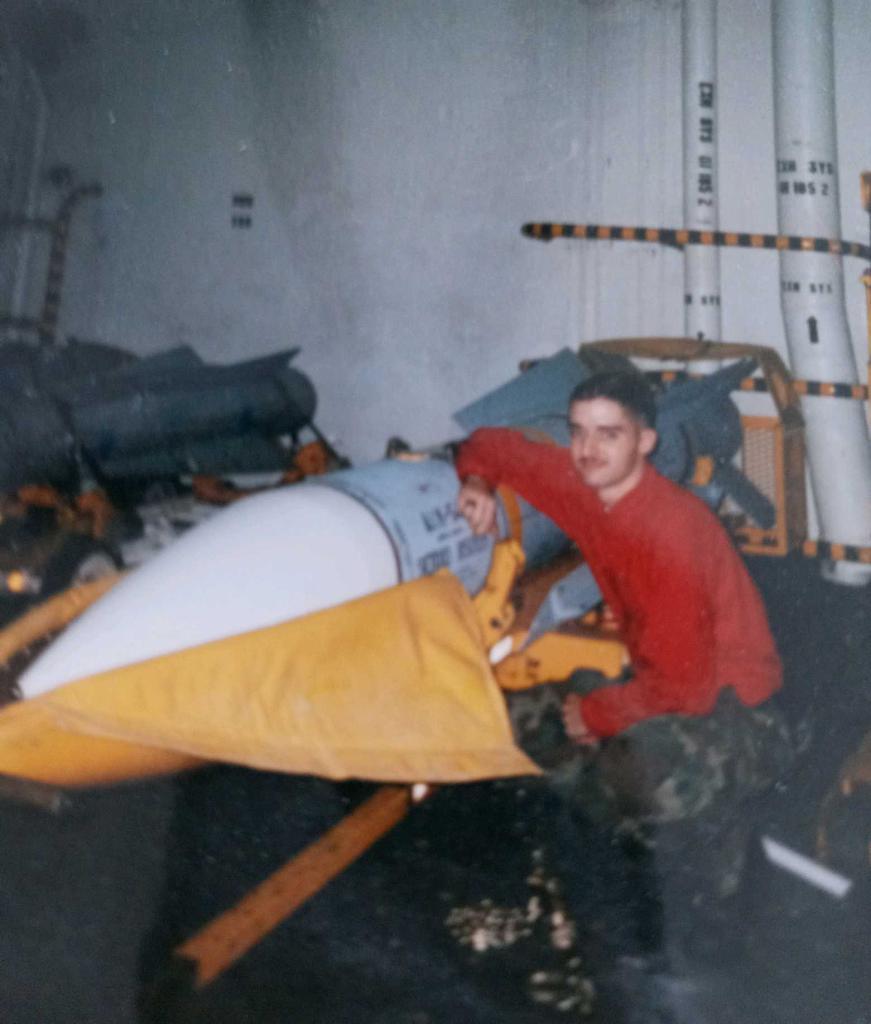 After four years in the Navy, Hinkle left service and headed into a new life aiming to be part of the public service as a police officer, firefighter, or state trooper. Importantly, he knew that he never wanted a nine-to-five job. At the time he was engaged to a partner with a young son, and he dreamed about that child going to that first day of school and stating proudly, “My dad is a cop.” His drive to work in the service of others was also about the opportunity for him to save a life and have someone look at him and say, “you’re my hero.”

While Hinkle contends that neither goal has been fully realized, the latter has come close. After years as an overnight beat officer, he received recognition from those he helped, receiving a sizable hug in court from both a man he saved from gunpoint and a young woman who’s chronic abuser he put behind bars.

With some seriously hard work and luck, Hinkle gained the opportunity to move to police positions that gave him better hours and increased independence. His career saw work as an overnight beat officer, a STRIKE team member, as part of a key duo in the burglary unit, and a member of the day watch. Two years ago, when his Captain asked him what he wanted to do within APD, he mentioned that he wanted to move three blocks south of his current assignment. Three blocks south put him in the Mounted Unit. 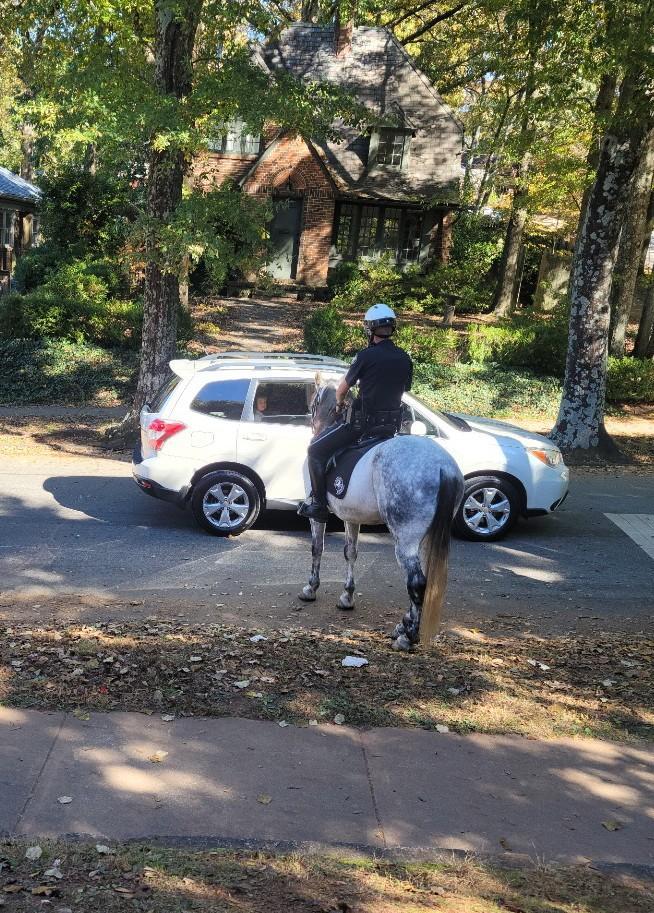 Hinkle had no question that one solution to the ‘suck’ was horses.“I like animals more than people,” Hinkle explained. “At Mounted, the majority of your job as a cop is taking care of your horse. Part of work is to go out, ride around and wave at the little kids and talk to people.”

“The first three months were nothing but training. I had sat on a horse before, but it was trail riding and I’m pretty sure I wasn’t controlling the animal. I had certainly never ridden down Peachtree Street on a horse. It was all new. I had to learn how to take care of them and how to ‘drive’ them.” 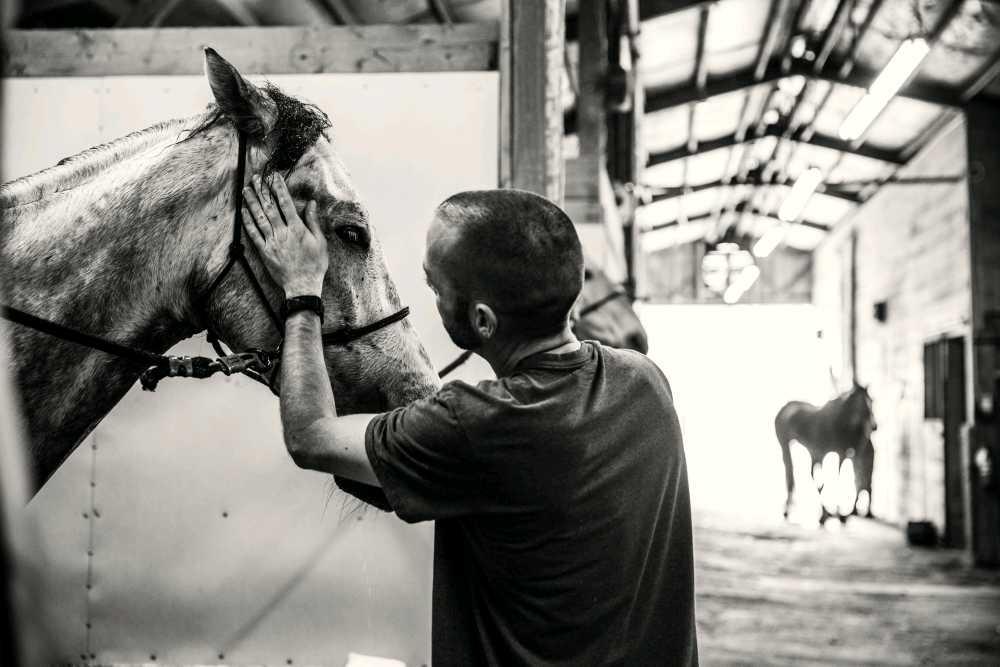 The learning curve was occasionally steep. At one point the unit was working on training horses to be comfortable leaving the herd. Hinkle was asked to ride Cody away from the herd around the outside of the fenced softball field and then return to the group of mounted riders.

“We were doing good, but I could feel that he was shaking,” he explained. “We made it all the way to the corner of the fence and he decided to jump up and make a u-turn. We galloped off from a dead stop and then we jumped a huge puddle. We only stopped because Sarge on Emmit stepped out to block the way.”

“LT (Lieutenant Lyon) was going ‘That was awesome!’ but I was freaking out. We were going like 90-mph! I go fast in cars, but it is definitely different when you don’t know how the brakes work!” 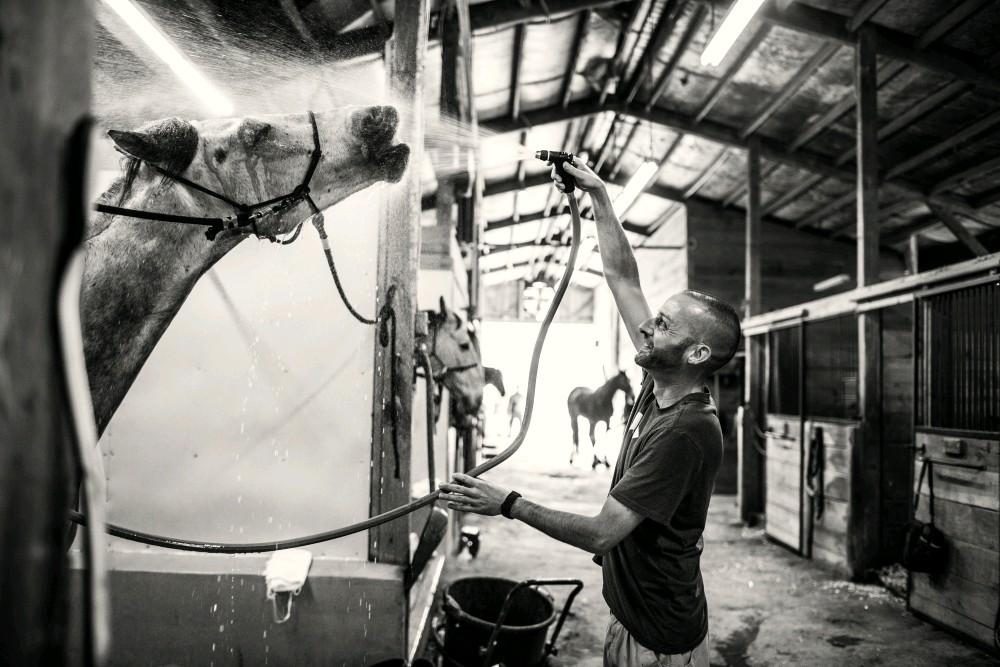 Since then, Hinkle’s riding has improved with saddle time and regular lessons with the APD civilian equestrian trainer, Kelly Robison. His relationship with Cody has also reached new levels of trust both on the street and in his stall. “The other day after a vacation, I opened the door and gave him a hug and patted his neck, and he reached around and put his head on my back. It was like he was hugging me back.” Hinkle then paused, “Or trying to bite me.” 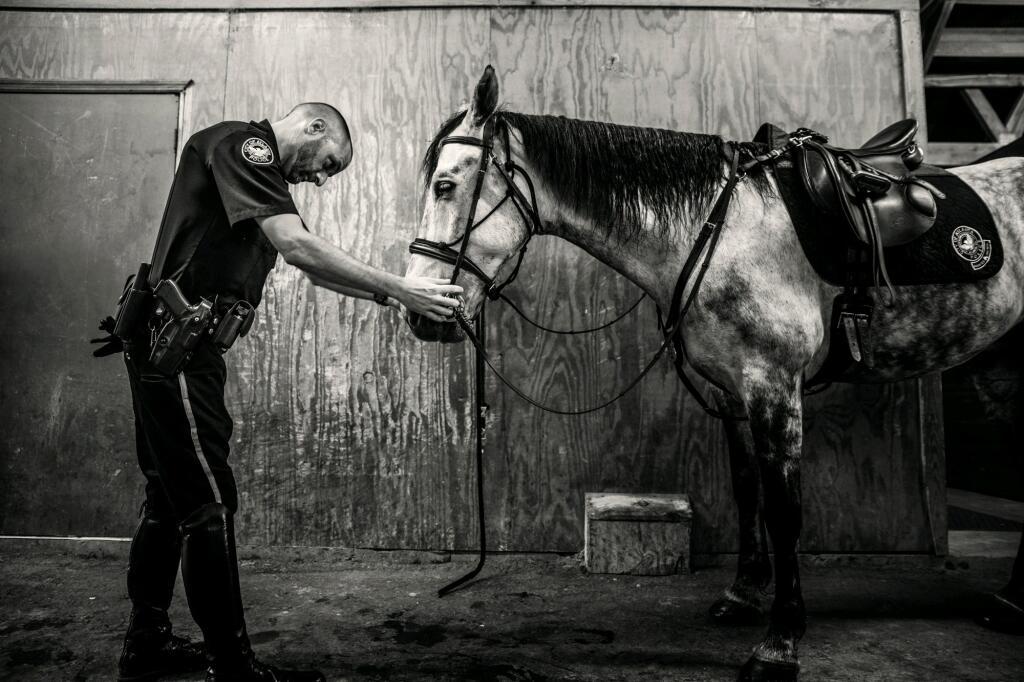 “Since I have been assigned to Cody,” he continued, “everything has changed. I was used to ‘the suck’ – in my childhood, the navy, in police work… but that has changed.” His goals for the future are to remain in the unit and stay with Cody. With any luck, the two will retire around the same time. “Hopefully,” Hinkle closed the conversation, “If I have my life together enough, Cody will come home with me.”