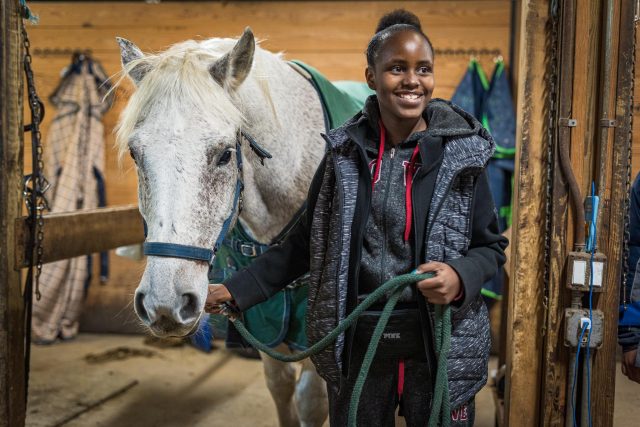 “When I step off the bus at DHP, I’m in a different world… horses taught me to never give up… Horses tell us to be strong, [that] you have got this and [that] you have someone in your corner…”

When David Silver, the founder of Detroit Horse Power, was an elementary school teacher with Teach for America in Detroit, he regularly found himself telling his class stories about horses. The equine-centric vignettes provided a way to communicate the values and social-emotional development that research has linked to success. Perseverance, empathy, responsible risk taking, confidence, self-control… all of this was easy for him to convey — if he used stories about horses.

The challenge, though, remained that most of Silver’s inner-city students had never interacted with horses. As he explained, “It felt incongruous that horses taught me these lessons, but the kids in Detroit were not able to even imagine interaction with horses, let alone in a deep and meaningful way.” 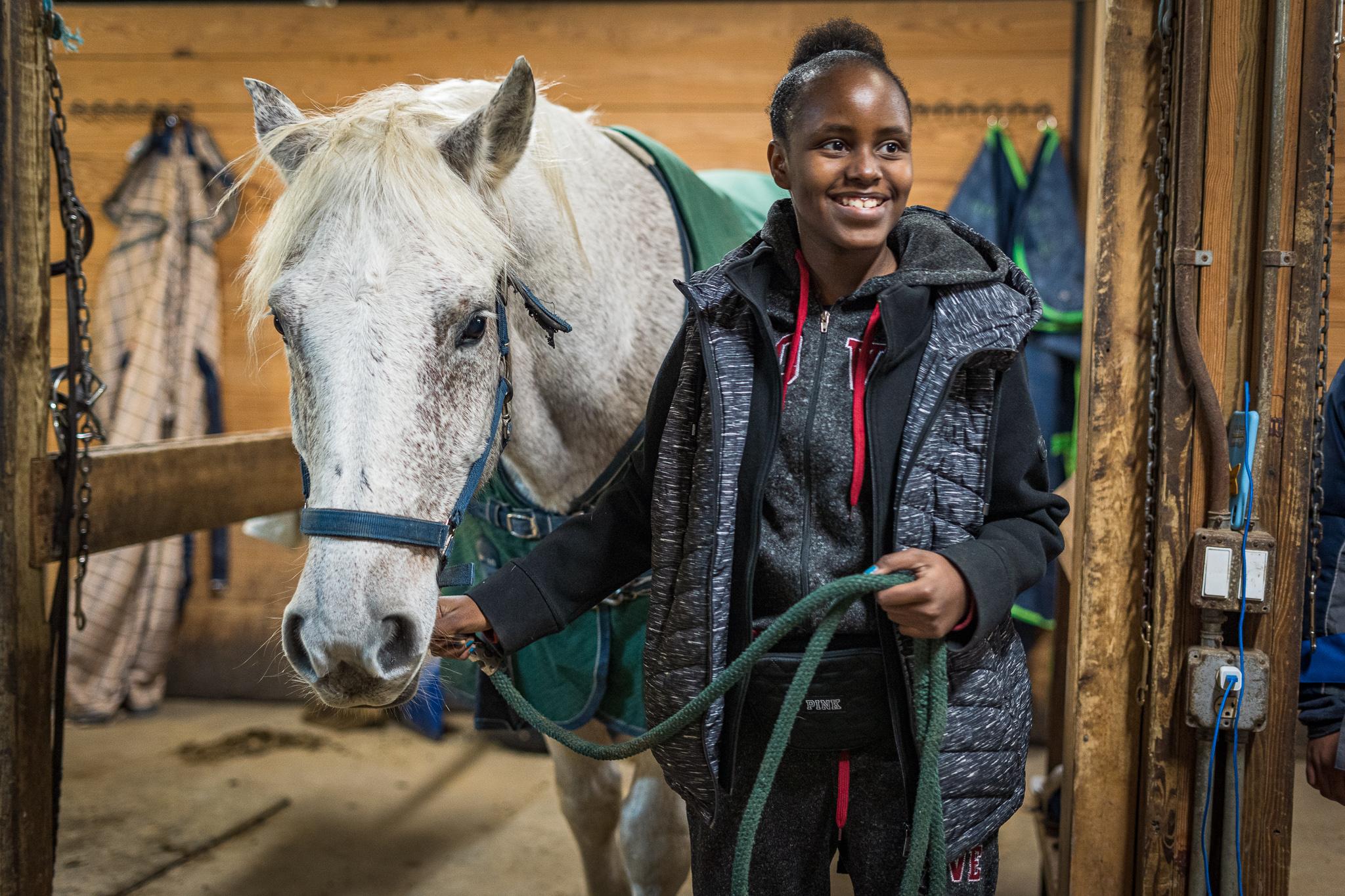 Silver grew up outside New York City in a family where horses were a central feature. His mother was an avid horse woman, and she guaranteed that should he or his sister wish to ride, horses would be available. Silver competed as a hunter-jumper in his youth and then in his teenage years, moved into eventing. His career culminated with a working student position with Boyd Martin and the completion of the 1* (now 2*) at Bromont.

As Silver headed into college at Dartmouth, he became clearly aware of his privilege and aimed to use his advantages to open doors for others. His time teaching in Detroit furthered this sentiment. There, getting under-privileged urban youth access to horses became a driving priority. In 2014, he registered Detroit Horse Power; in 2015, it officially opened its proverbial doors to inner-city elementary, middle, and high school students. The non-profit uses riding and horse care to promote important life lessons and develop the aforementioned social-emotional skills linked to lifelong success. 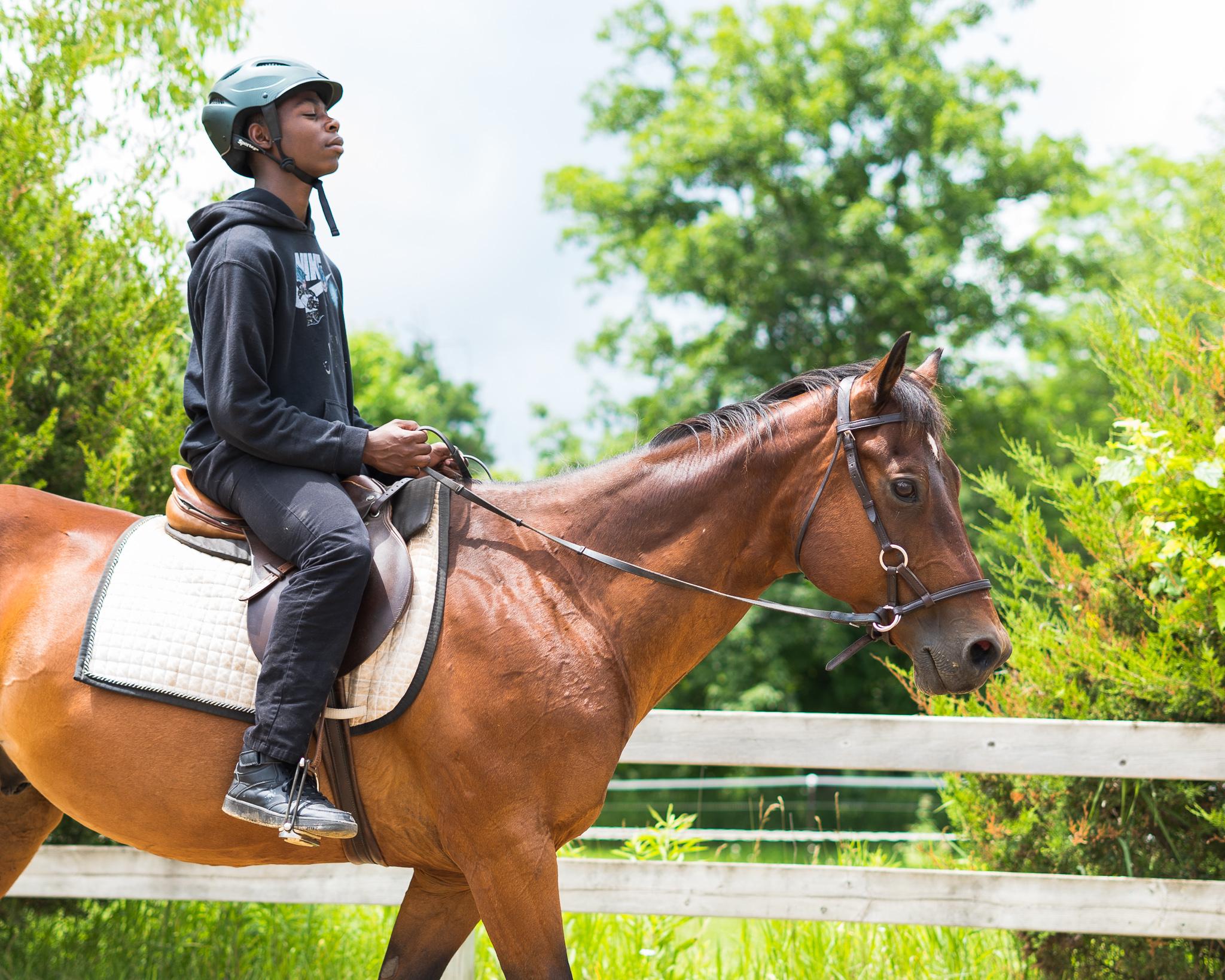 To do so, Silver built a program that contracts with “a live network” of dozens of farms just outside of the city for both summer camps and an after school program. Detroit Horse Power provides all the staffing, training, reflection, transportation, meals, and instruction, but relies on the farms for access to the literal horse power.

What began as week-long summer camps for elementary, middle, and high school students have since expanded to also include after-school programming. In their year-long option, students meet three times a week for social-emotional reflections and equine-centric projects in school classrooms. Horse time happens on the weekends. Summer camps pack education about the traits central to character building, groundwork with the horses, and riding skills into each day. 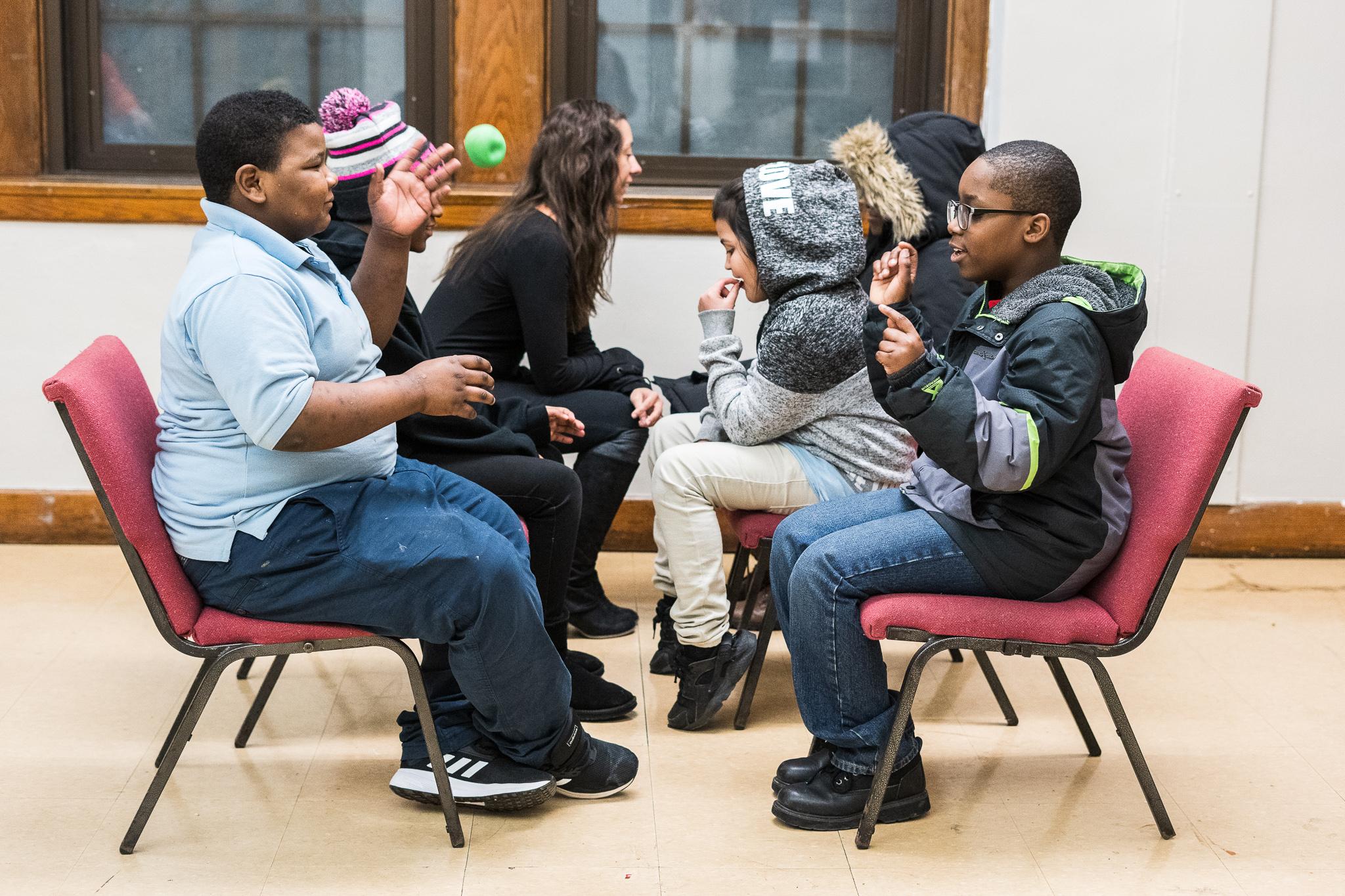 According to Silver, “Horses bring out the best in our students. The conversations get surprisingly deep – students use the horses to process trauma and to think through things about their lives that they are proud of, or which they find hard. Shy students have become more comfortable speaking in school. Families have shared that they are more outgoing and confident. Sibling pairs who are constantly fighting and struggling with emotional regulation find empathy and have developed self-control through interaction with the horses, showing in a marked shift at home. Also, students who have been with us for a number of years – our alumni — have reflected that they regularly make use of the traits and training in college as they strive to tackle new challenges.” 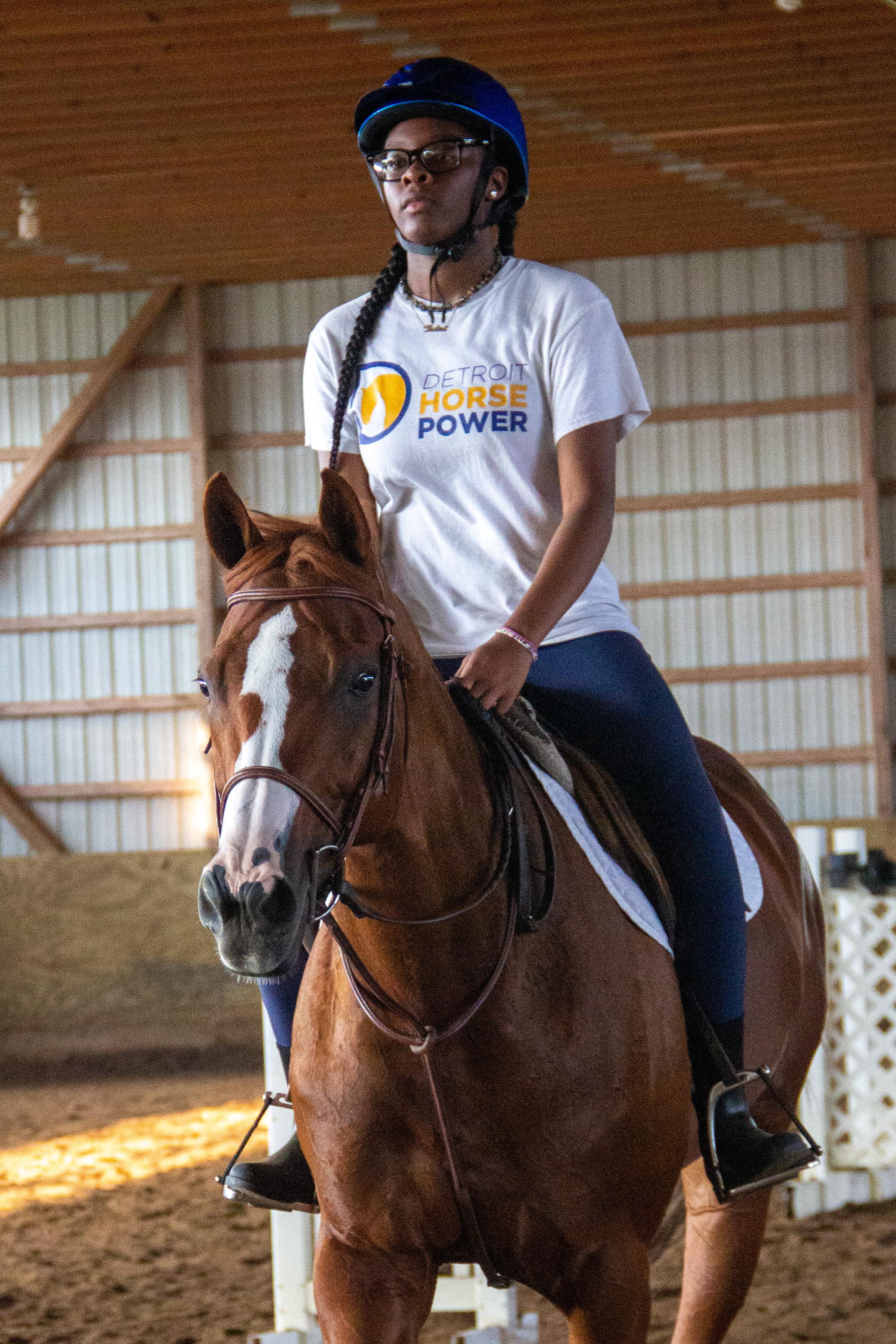 The students’ reflections line up with Silver’s logic. According to Cory, a high school student who began riding with Detroit Horse Power in 2018, time with the horses has changed how he sees and engages with the world. “I can be antisocial,” he noted, “But when I step off the bus at DHP, I’m in a different world… horses taught me to never give up… Horses tell us to be strong, [that] you have got this and [that] you have someone in your corner…” 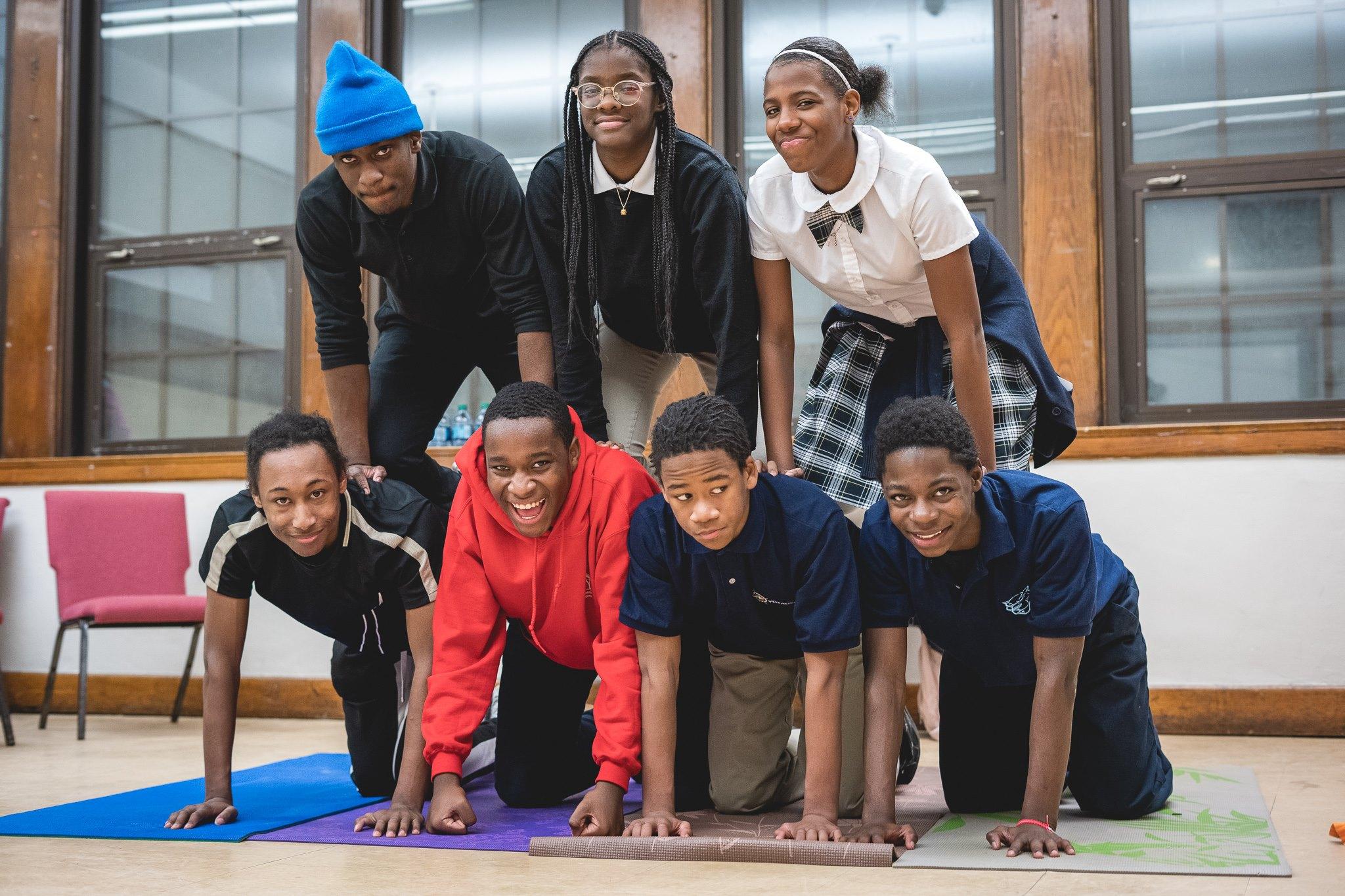 Zooming out, the progress also shows in both their numbers and the ambitious future plans. The program that began with 40 summer camp students now has 500 participants and ample room for growth.

And in a city that has recently decreased its population by more than a million, there is room to accommodate this evolution. Silver added, “There is a lot of open space here – space that needs new and creative purposes.” Detroit Horse Power has secured a 25-year lease on a 14-acre former school-site. Through a sizable capital campaign, Silver plans to build the country’s largest urban equestrian center dedicated to youth development. 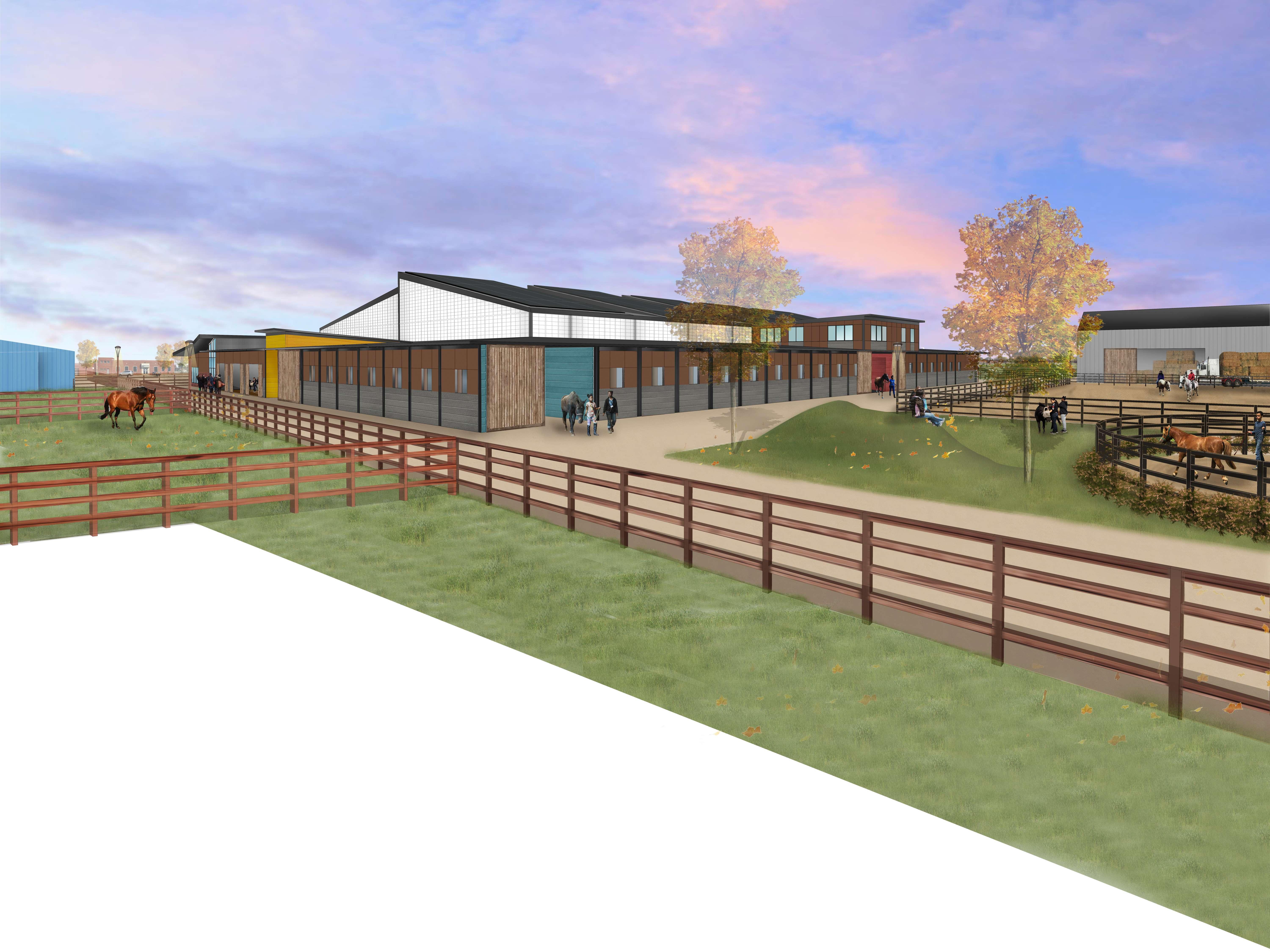 A portion of the plans for the future Detroit Horse Power facility. Schema courtesy of David Silver.

Plans include stabling for 24 horses, indoor and outdoor arenas, ample paddock space and wings for educational classrooms and offices. If all goes as planned, they will break ground in 2023 and literally open the barn doors in 2024. Some of those classrooms, trainer openings, and offices will be staffed by former Detroit Horse Power students. Cory, the student who began riding in 2018, as well as a number of other alumni, are eager to become involved in program management.

That said, Silver makes it clear that the lessons that students learn through the program will serve them well no matter what field they choose to pursue. And in so doing, horses will go on to teach more than just those students. They will become part of the stories that future successful individuals tell of how they built character, confidence, empathy and perseverance, even while growing up in the challenging core of America’s motor city.

If you want to donate to Detroit Horse Power, you can get more information here.