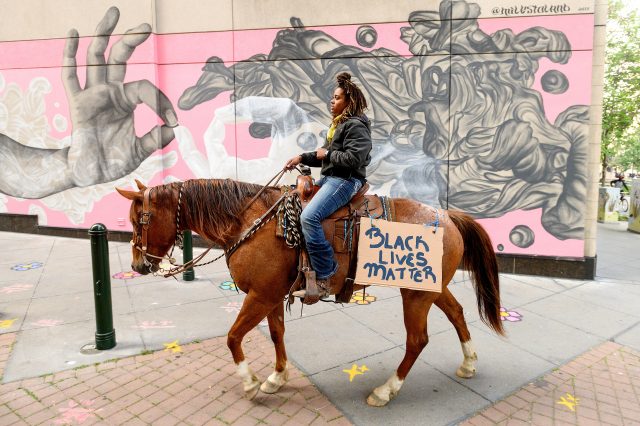 Little by little, Brianna Noble is providing opportunities and breaking down the barriers to entry to the horse world for those who might no know they could have access to horses, let alone truly learn to ride.

The photo became iconic: In June of 2020, during the Black Lives Matter (BLM) Protests against police brutality, a parade marched forward through the Oakland, California streets and a young black woman on an Appaloosa gelding raised her fist in solidarity.

The photograph of Brianna Noble went viral, and in so doing, it sparked nation-wide conversation. Writ large, the equestrian community was asked to take a hard look at its often-monochromatic pallet. In this expensive sport, questions rose to the surface of not only who rides, but who has access to horses in general, and how we as a community could and should change. 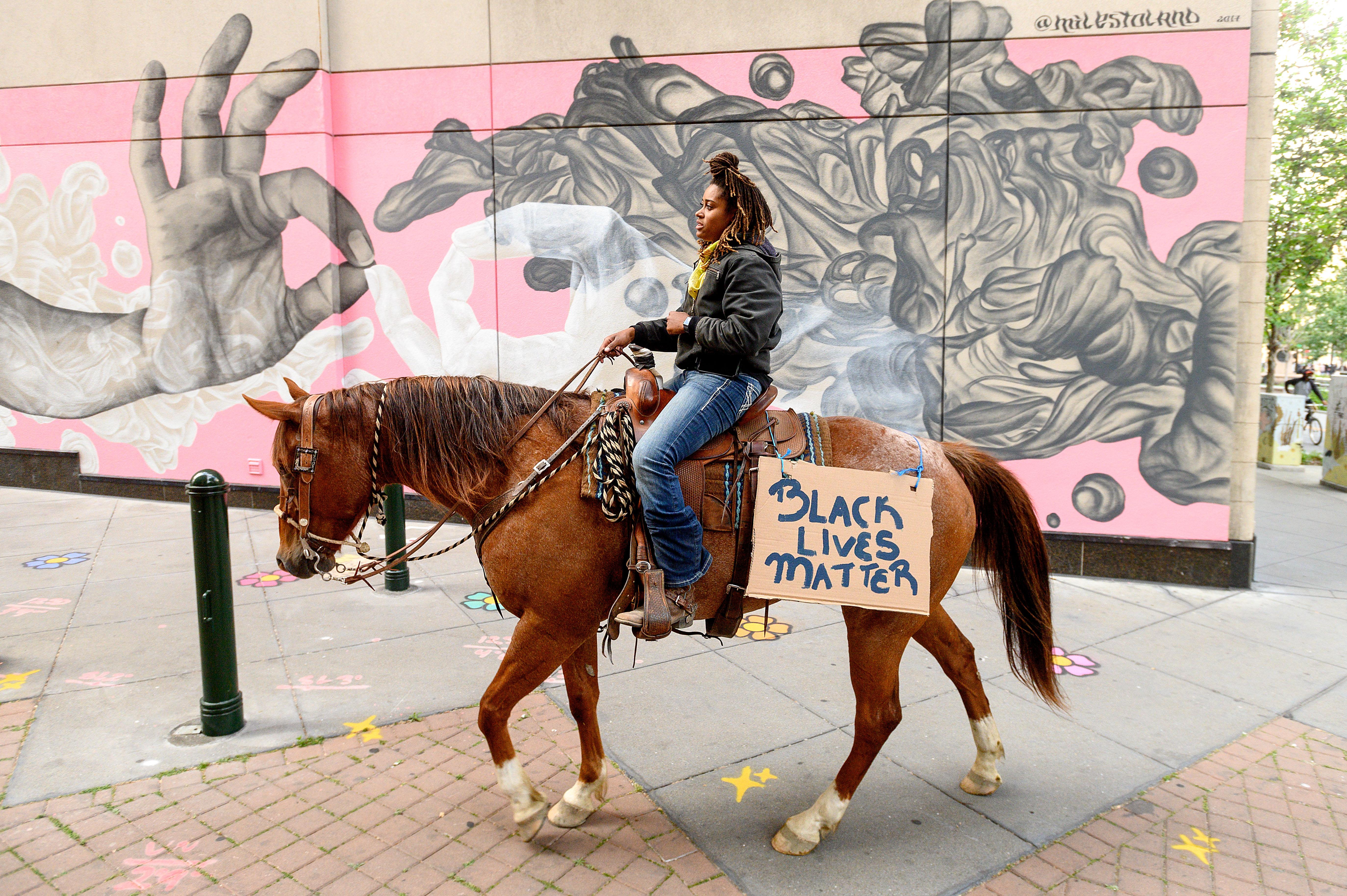 Brianna Noble and her Appaloosa gelding, Dapper Dan, walk with a parade of supporters during the Black Lives Matter Protests in June of 2020. Photo by Noah Berger provided courtesy of Brianna Noble.

Those questions were not new for Noble. In relation to the summer camps at nearby stables that she attended as a child and later taught, she noted, “I’d look around and realize that I was the only person that looked like me.” At age five, Noble thought that she wanted to be on the USA Olympic Equestrian team. She knew, even then, that such an accomplishment would be a first for a black woman.

Long before the BLM photo rocketed her to fame, Noble had been not only aware of the barriers to accessing horses for urban communities and people of color, but also taking active steps to change them. When Noble taught for-profit summer camps, she would use that income to add one or two weeks of free summer camp for those who could not afford the access to the equine world. The experience for both groups was the same, but the for-profit work enabled her to invite inner city groups out to experience the joy of horses free of cost. 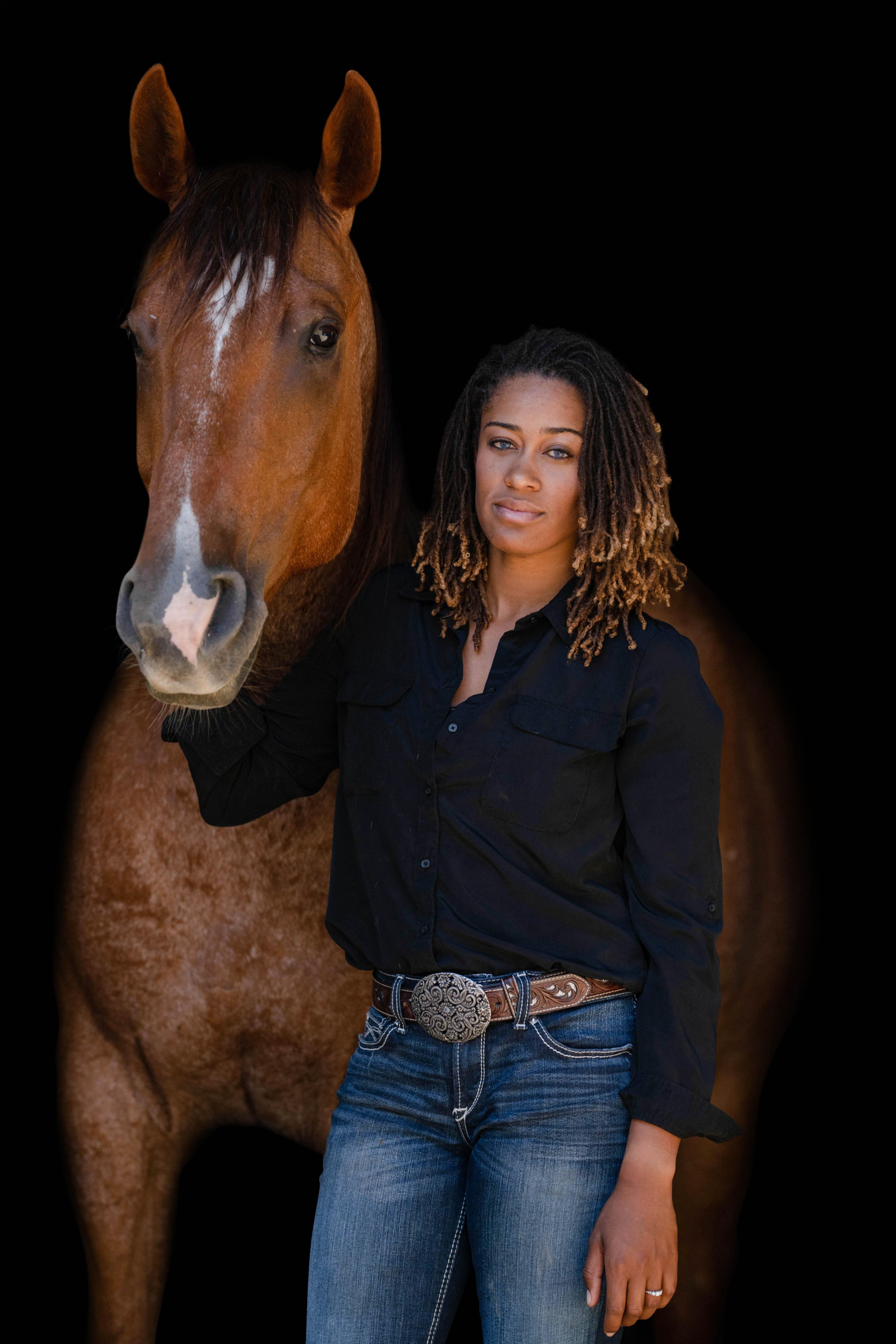 Noble’s “ten minutes of fame,” as she describes it, provided momentum not only to the BLM Movement, but also to her life and personal causes. “I was not interested in making myself more famous,” she explained. “But it was clear that this was my shot to get people to pay attention to this work [providing equine access for urban communities of color] in the Bay Area.”

“Humble,” a non-profit organization that provides equine (and outdoors) access for inner-city Bay Area residents, grew out of the attention. As donations rolled in and big companies like Ariat and Purina sponsored her program, she developed a path forward that would not only aim to change access to horses in the region, but also would do so sustainably. Keeping the lights on and doors open to the community became key.

Part of getting Humble running was having a location that Noble and the organization could call home. Noble recently established Mulatto Meadows on a 36-acre ranch in the Castro Valley of California, just 15-minutes from some of the region’s most underserved communities. The 60-stall farm hasn’t seen horses in a long time, but still sports a sizable indoor, outdoor grass arena and three barns. With the help of local law firms as well as professional services and non-profit donations, Humble and Mulatto Meadows have begun renovations and broken into a steady gallop forward, already offering community days, toddler classes and introduction to horsemanship opportunities. 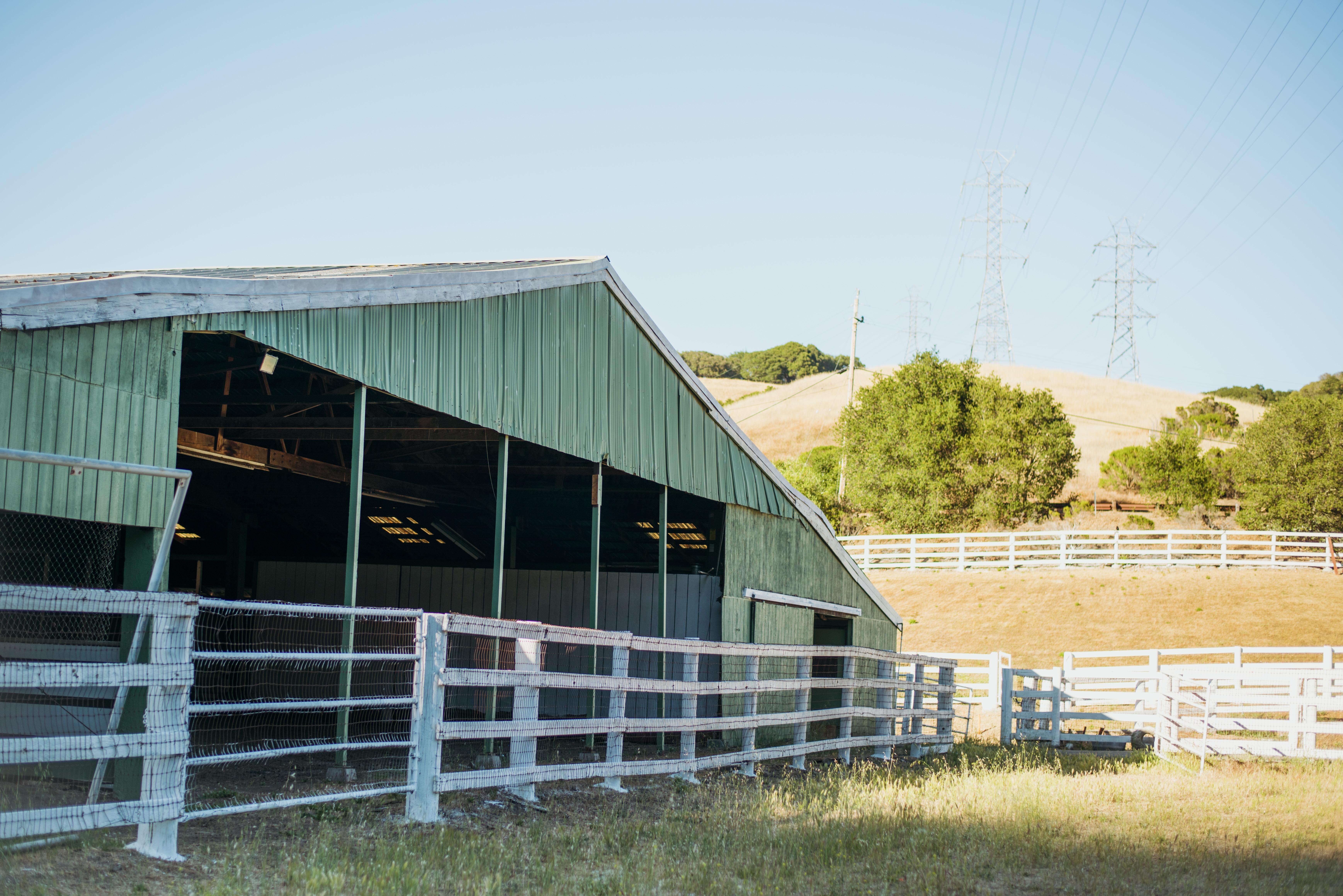 But Noble knows that every gallop is followed at some point by a slower gait. She’s determined to keep the project afloat even when spotlight shifts. “You see so many great non-profits have to close their doors here. The money runs out and they can’t keep the lights on. We’re a fiscally sponsored project exactly so that we can ride out hard times.” Noble plans to run the non-profit side of her project as the primary pursuit, but when things get tough, she can use the income from her for-profit work to help keep Humble afloat. On the for-profit side, Noble trains horses, teaches camps and even boards dogs during the day. Flexibility is essential.

Importantly, it is inclusivity that also helps her projects remain flexible. She recently hosted a community clean up event which invited neighborhoods and non-profits out to the space to help get the farm ready for horses. She is partnering with hydroponic organizations to provide space and keep the cost down for growing fodder for the horses, while also working on a bio-digester to cut the cost of removing manure. And while she gets the farm up and running, she continues to reach out to other non-profits who might be able to benefit from use of the space, emphasizing that Humble and the access to horses the organization provides is, at its heart, all about community.

For the communities near Mulatto Meadows, her goals are pretty straightforward: Change the barriers to access. Get folks who would not otherwise have the opportunity outside and around horses. Through introduction and experiential classes, she works to spark their interest in horses while providing basic knowledge, grooming and a chance to ride. For the youngest of the group, she gives stick horse tours of the farm complete with carrots for the real equines. 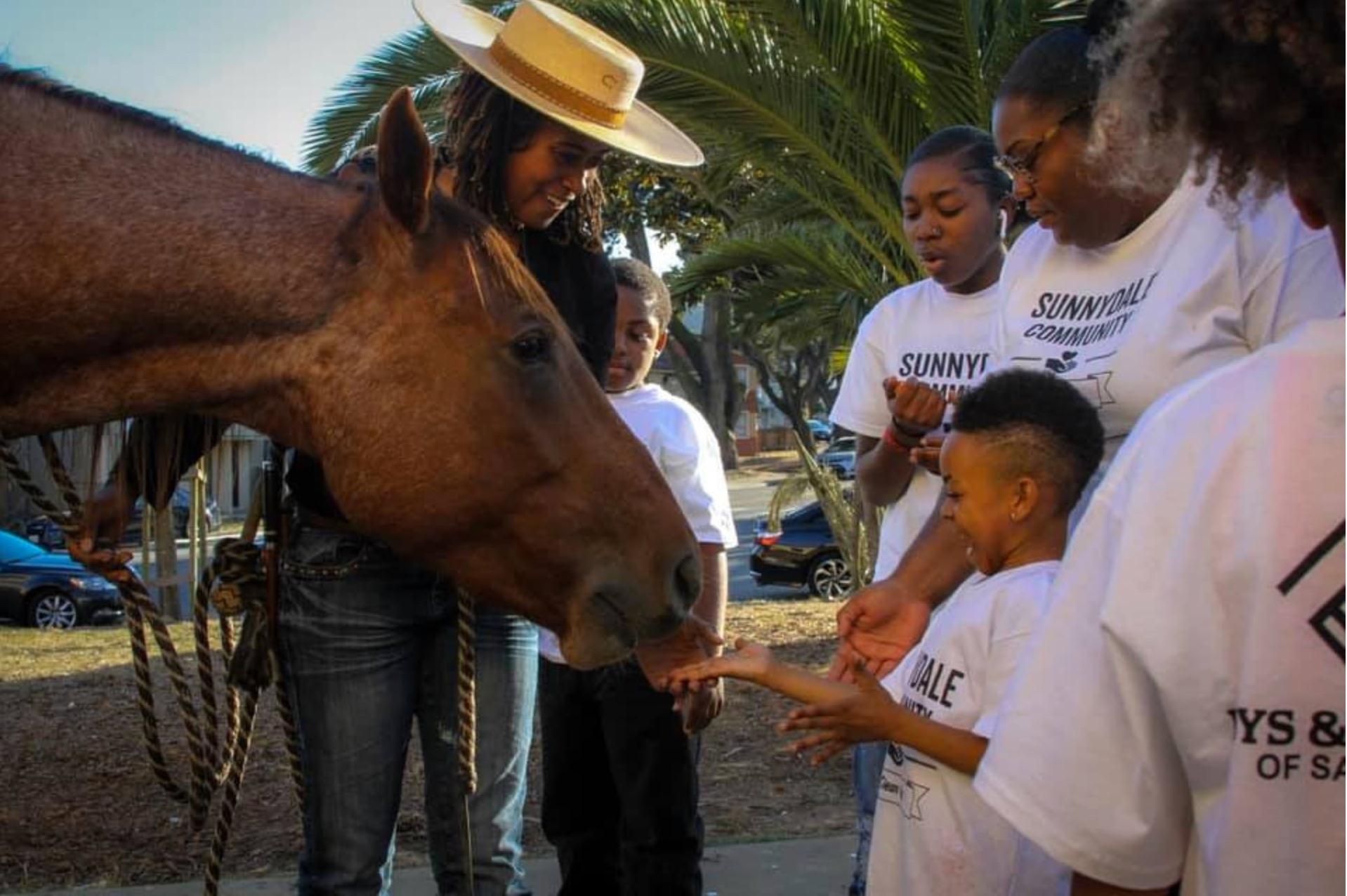 In the end, it’s the moments of watching horses change the worlds of those around them that count. Noble recounted a recent situation, in which a young boy, Andres, came to her farm; he was shut down, angry, his head low and stuffed in his hoodie.

She explained, saying, “He was completely shut off to me and wouldn’t let me get anywhere near him.” A few minutes after she got Andres up atop a pony and everything changed. “He was like, ‘Miss Bri, what is that? Can we go over there?’” You could hear Noble grin proudly through the phone as she explained the shift. “Five minutes on a horse changed his whole demeanor.” She’s hoping that it’s a start to changing his life.

Noble’s program, “Humble,” and her location on Mulatto Meadows aims to make children like Andres the norm. By exposing urban youth to horses and lighting that flame of curiosity, Noble aims to answer the questions of what the equestrian world could and should look like. Little by little, she is providing opportunities and breaking down the barriers to entry to the horse world for communities and individuals who might otherwise have gone through their entire lives not knowing that they could have access to horses, let alone truly learn to ride.

For more information on Brianna Noble’s “Humble” or her new location at Mulatto Meadows, vist her website: https://www.mulattomeadows.com/

Here at Horse Nation we love to recognize individuals and organizations that are doing good work in the horse world. If you know someone who deserves a Standing Ovation, we would love to recognize them in a future post. Email the name of the person or organization along with a message about the good work they do to [email protected]. Photos/videos are always welcome, and include a link to their website if applicable.