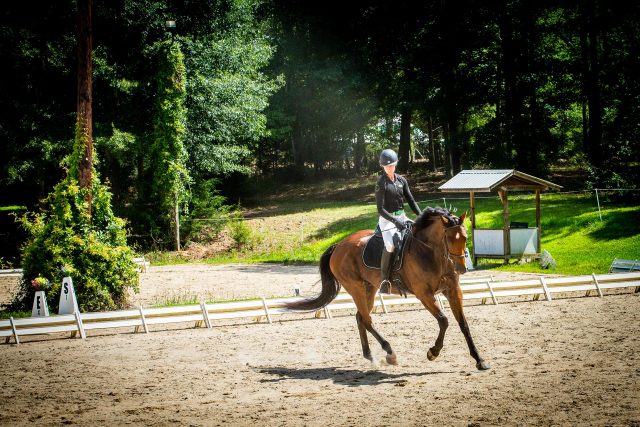 “Boomer will go to Kentucky in October and will inevitably not be ready, but his future will carry on long after he exits the Rolex arena.”

Following the announcement that the Retired Racehorse Project‘s 2020 Thoroughbred Makeover and National Symposium, presented by Thoroughbred Charities of America, will be postponed to 2021, competitors have been working to decide what comes next for them and their mounts. Today, Aubrey Graham talks about moving forward with intention (and landing well).

They all mean the same thing: Get out of the bloody mire you’re stuck in, get over the literal or figurative fence, and get going. Letting go was hard. Giving up was harder. Doing both with horses and humans simultaneously left me out of sorts and behind on everything. I tried to follow cultural protocol – cut myself a break. Take some time. Remember that hard is “Good” (thanks, Jocko). Relax (ha, sure, maybe next year).

Some days, I allowed myself an extra 15 minutes of sleep in the morning. I stopped worrying if I didn’t know exactly how the day was going to go. I let some of the small things slide. I didn’t worry if I didn’t have the energy for the last training ride (inevitably it was one of mine who was on the chopping block anyway). I finally decorated the upstairs. I took my Monday afternoons and went for trail rides and spent time with old and new friends. 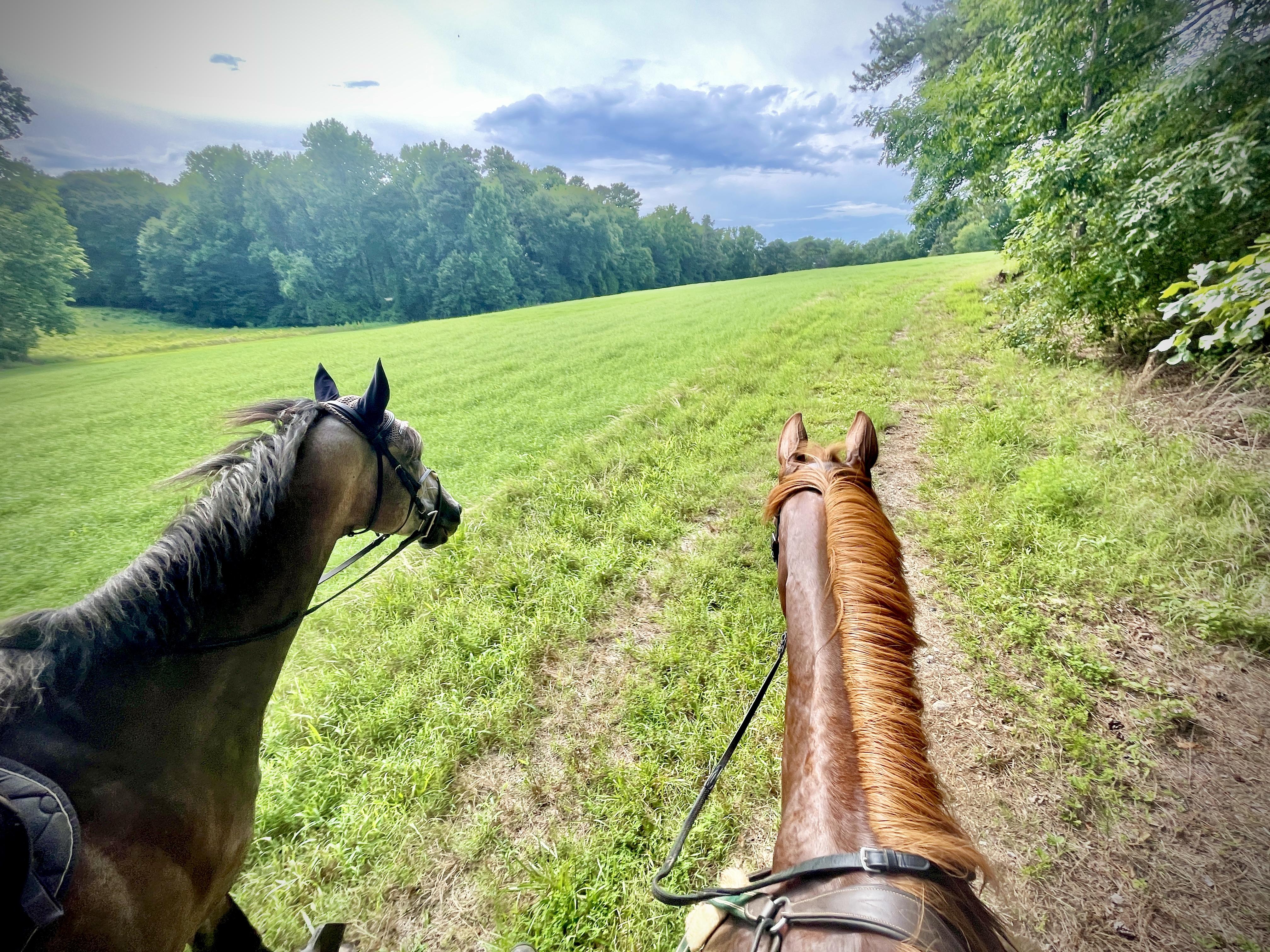 Crafty Charger and Loki (with Caroline Templeton astride) enjoyed a trail hack after an xc school at Ashland Farms. Photo by Aubrey Graham.

But in this industry, and with the Retired Racehorse Project’s MegaMakeover fast approaching, there is only so much break-cutting that can happen. It is time not only to move on – go forward —  kick on, but also time to focus that momentum. And so, for the last month or so, I have been working to define exactly what that means – not only where I’m headed, but also what I want to see between the ears in front of me. 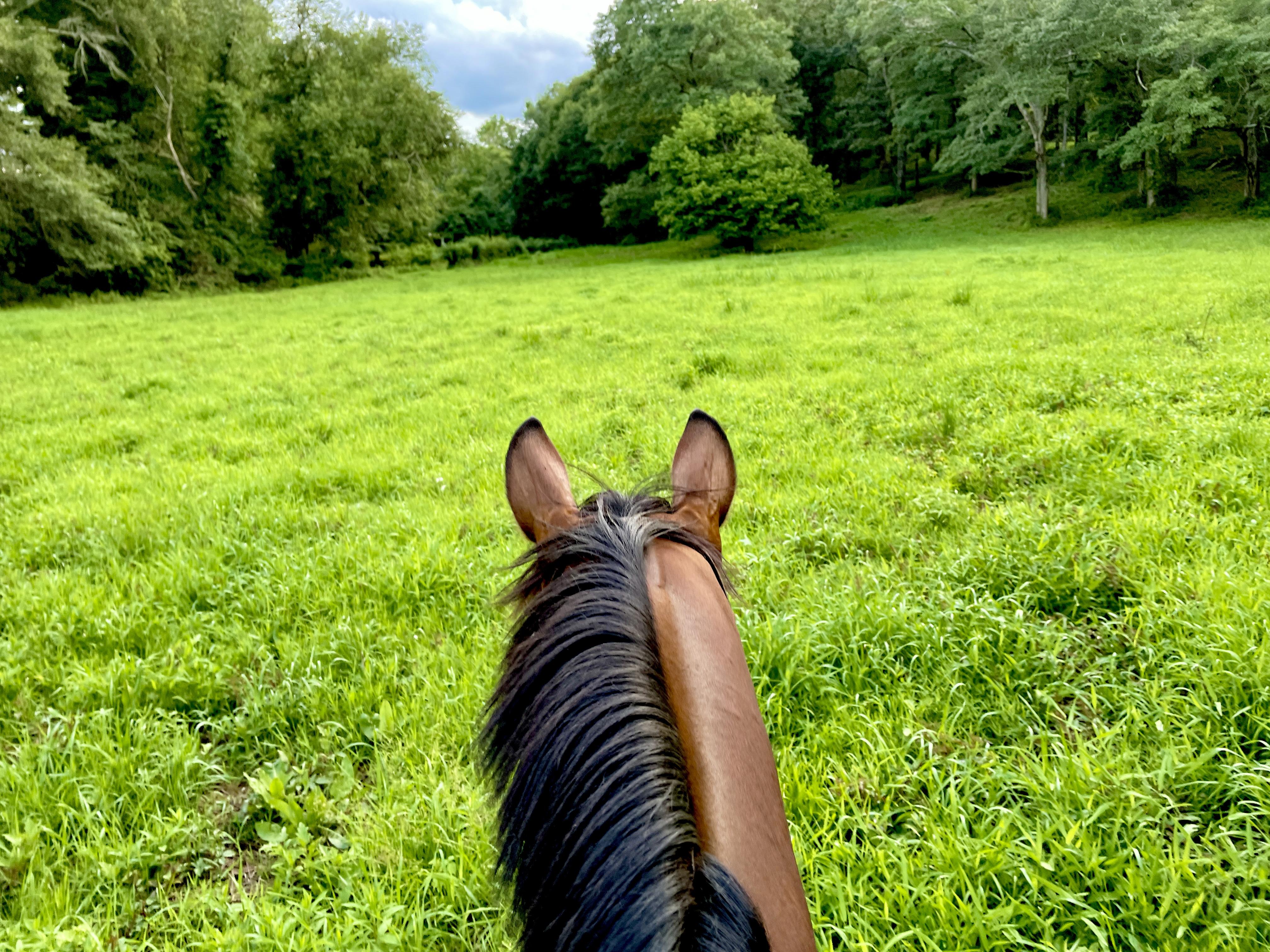 Rhodie (JC Western Ridge) provides a “between the ears view” that just keeps getting better. Photo by Aubrey Graham.

Focus is future-oriented. So, as it turns out, is kicking. It is all about what you want to have happen – the get going part – faster – that way – do it – Get! But it also requires direction… otherwise, as I have learned and some of my students have found out, you might jump well if you get your eyes up, sit up and use your leg, but your landing is going to need attention too, lest you simply freight-train off in any equine-derived direction. 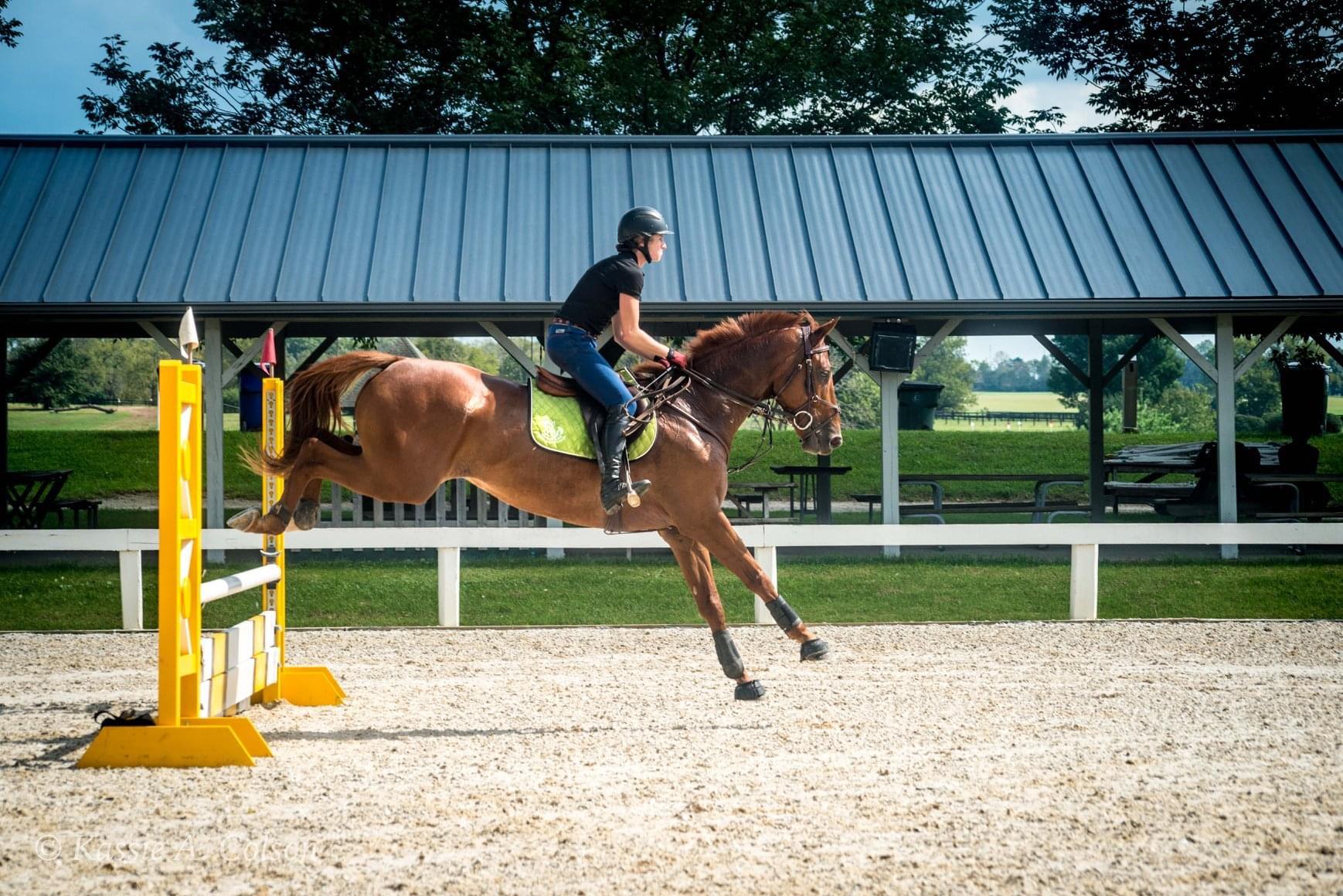 Forrest (JC Don’t Noc It) thinking about freight training away in schooling at the Retired Racehorse Project’s 2018 Makeover. Photo by Kassie Colson.

Right now, my barn is busier than it ever has been. Horses need training, many need buttons installed so that they can find new area codes. Others need hacks, secondary vet care, general attention and work. For the first time in two years, I have regular help every day of the week (though it is hard to believe that my amazing working students go back to school in August). Final registration for the Makeover opens this week. Things are stacking up to take off – I just have to not only show up, but also focus and steer, dammit.

So, when the opportunity came to get Boomer (JC Vanderboom Ridge – TB Makeover class 2020) to a show, I took a deep breath and filled out the forms. Boomer, for the record, hasn’t shown since he went to Poplar Place Farms in February of 2020 and showcased his amazing yard-sale abilities. Between then and now, he irritated an existing suspensory injury and told everyone loud and clear that jumping was not in his cards. His work now sits squarely in the land of dressage only. 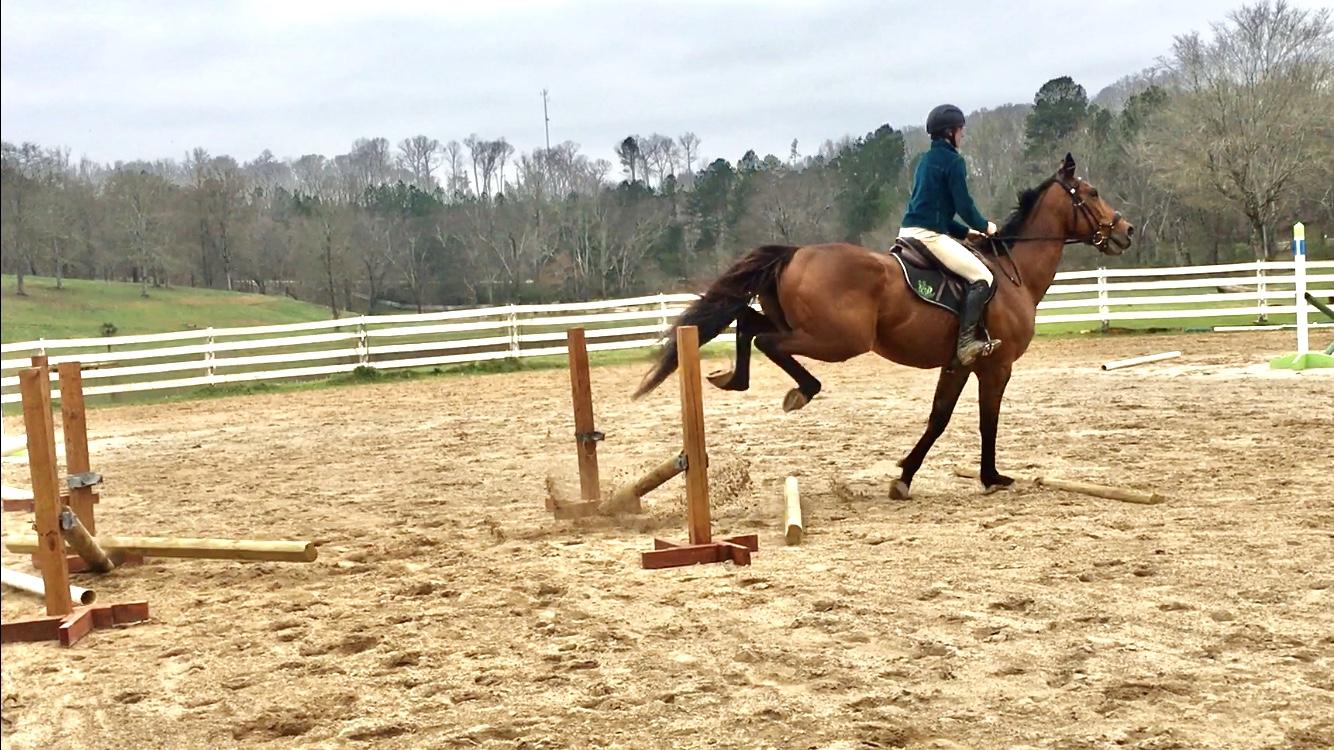 Throw back to Boomer’s yard-sale ability in early 2020. Screenshot by Alanah Giltmier.

Is he ready to show? Nope. Not at all. Are we doing it anyway? Absolutely. Because what better experience than to simply jump in, ride forward and see what he can do?

Caroline – a friend and the show organizer for the Big Cheese Eventing shows — promised to slot him where I would have enough time to warm up outside of my coaching. Despite a packed show schedule, she pulled through. Boomer had some of the later ride times of the day, and USDF intro B and Intro C loomed in his future. To be fair, Boomer’s dressage is pretty, but it is also super imprecise. He has lovely self carriage, but he is fussy about his mouth, and his canter transitions are tricky at best. The day before the show, I asked for a right lead on the circle (à la Intro C) and he ran sideways, slicing his leg in the ensuing pandemonium. Typical. Address the leg, address the frantic transition, address the looming show, load up and drive forward. 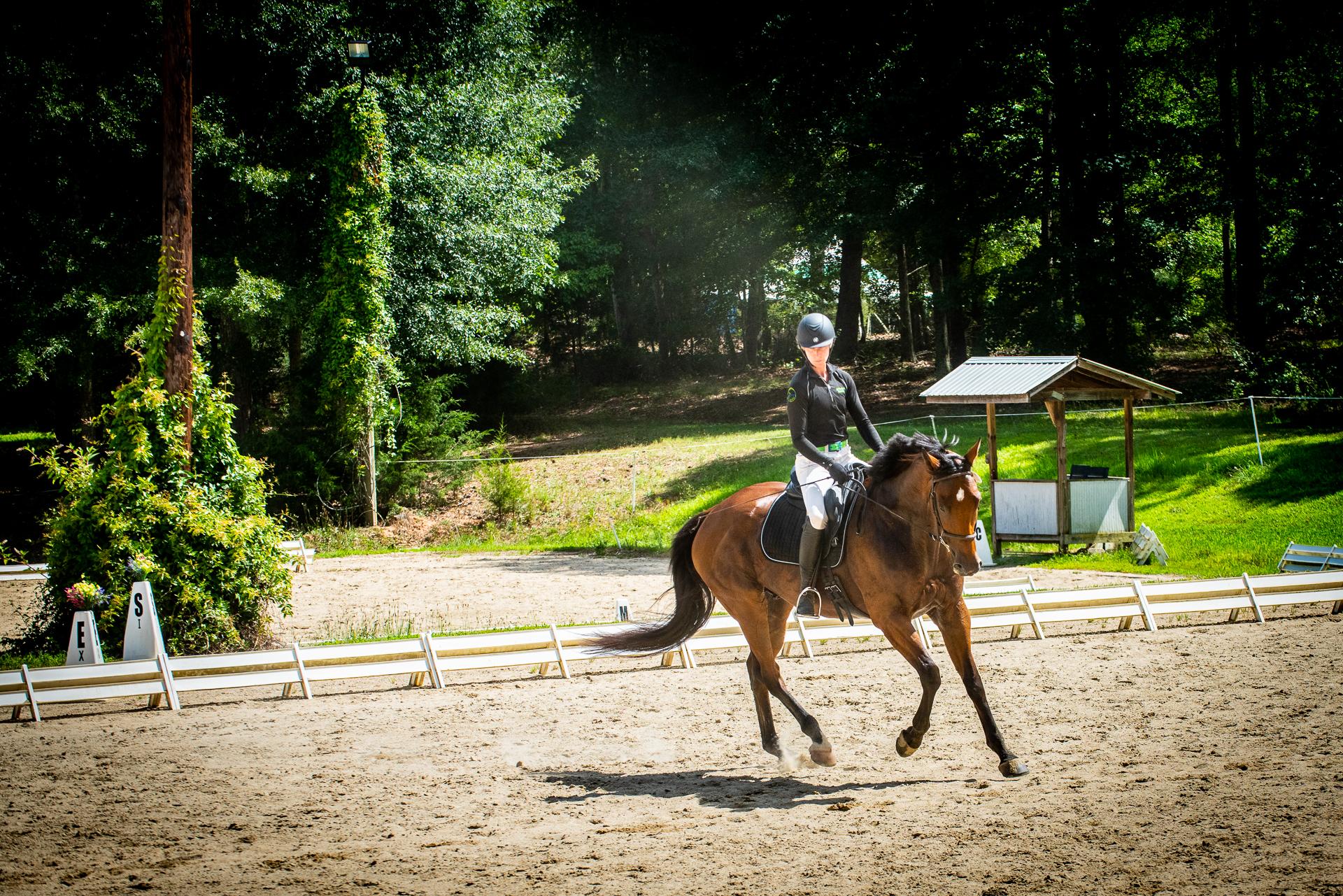 Boomer actually managed to get his right lead and not lose his mind at the Big Cheese Eventing show this month. Photo by Kelly Robison.

In the arena, I grinned through a good bit of his test (which is usually a tell that things are going sometimes-literally sideways). But the big, sweet kid was good. He put the effort in (AKA did the things and did not jump out of the ring) and was an absolute joy to be around. Boomer’s scores were slightly better than expected, too – though far from good in any “real” way. But I’m not showing him to win — at least not just yet. Right now, he needs experience. He needs to get inside the white fencing and learn that his cruise-ship-shaped 17.1-hand body can indeed make the 10-meter turn onto the center line. 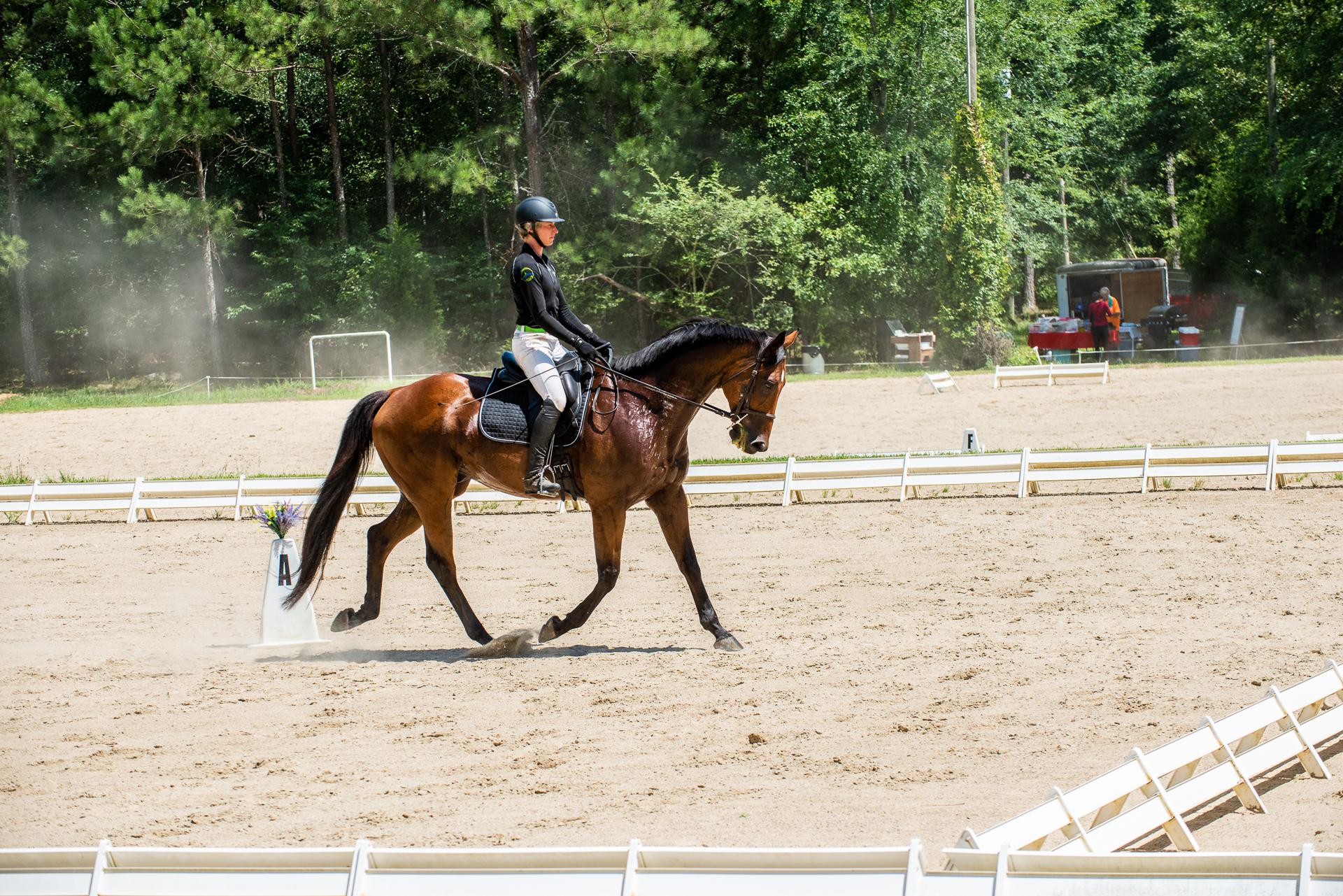 Boomer-the-cruise-ship heading into the sand dancing arena at the BCE horse trial this month. Photo by Kelly Robison.

As I look at the calendar, I sit here and know that he needs more shows… more time. But that’s where the RRP Makeover comes in. It is a major goal, sure, but it is also just a temperature reading on initial training. The Makeover provides an amazing journey to kick off second careers, but it is far from the end of the road. Boomer will go to Kentucky in October and will inevitably not be ready, but his future will carry on long after he exits the Rolex arena. 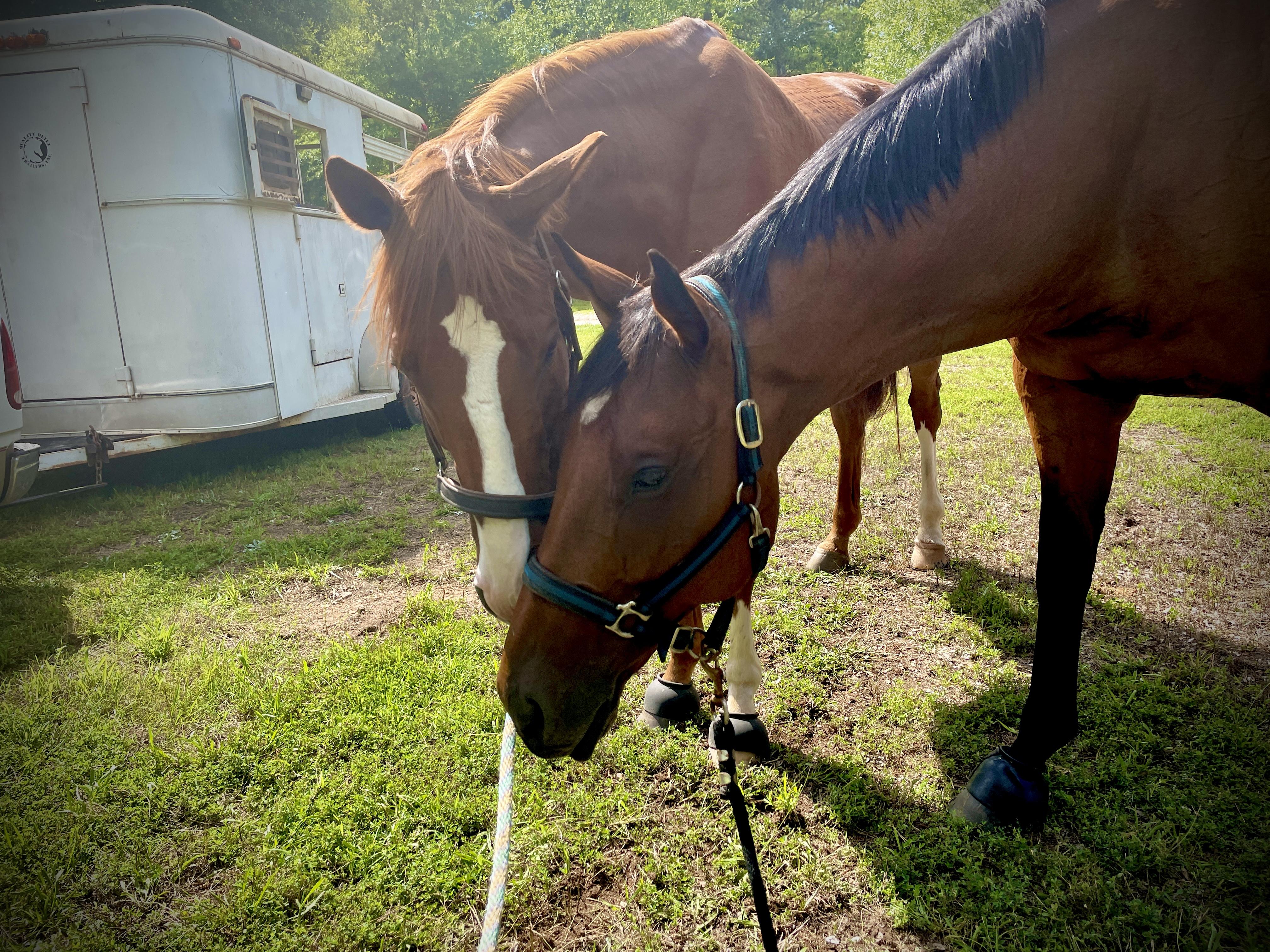 Similarly, Rhodie’s (JC Western Ridge, TB Makeover Class 2021) career is getting a refocus. After his literal and figurative run-in with the standard, I re-geared his training. We went back to basics. I ran through his psychology, worked his body over and set out on a focused path that trained not only smarter, but also more holistically. In the past number of weeks, we have varied workouts even more than I usually do – ground work, jumping gymnastics, lunging, dressage, hill work, trail rides – all the things that build the stability of mind and body that will (with a little luck and a ton of focus) take us up the levels. 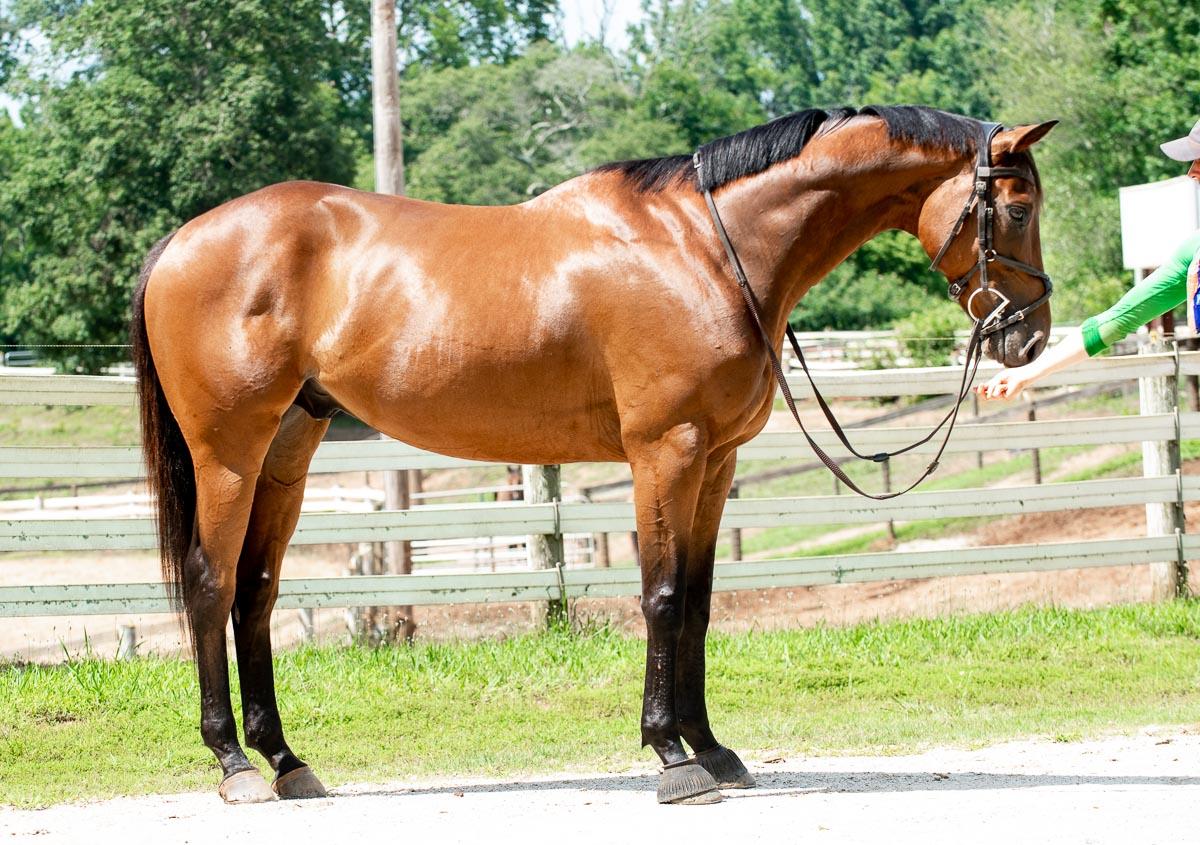 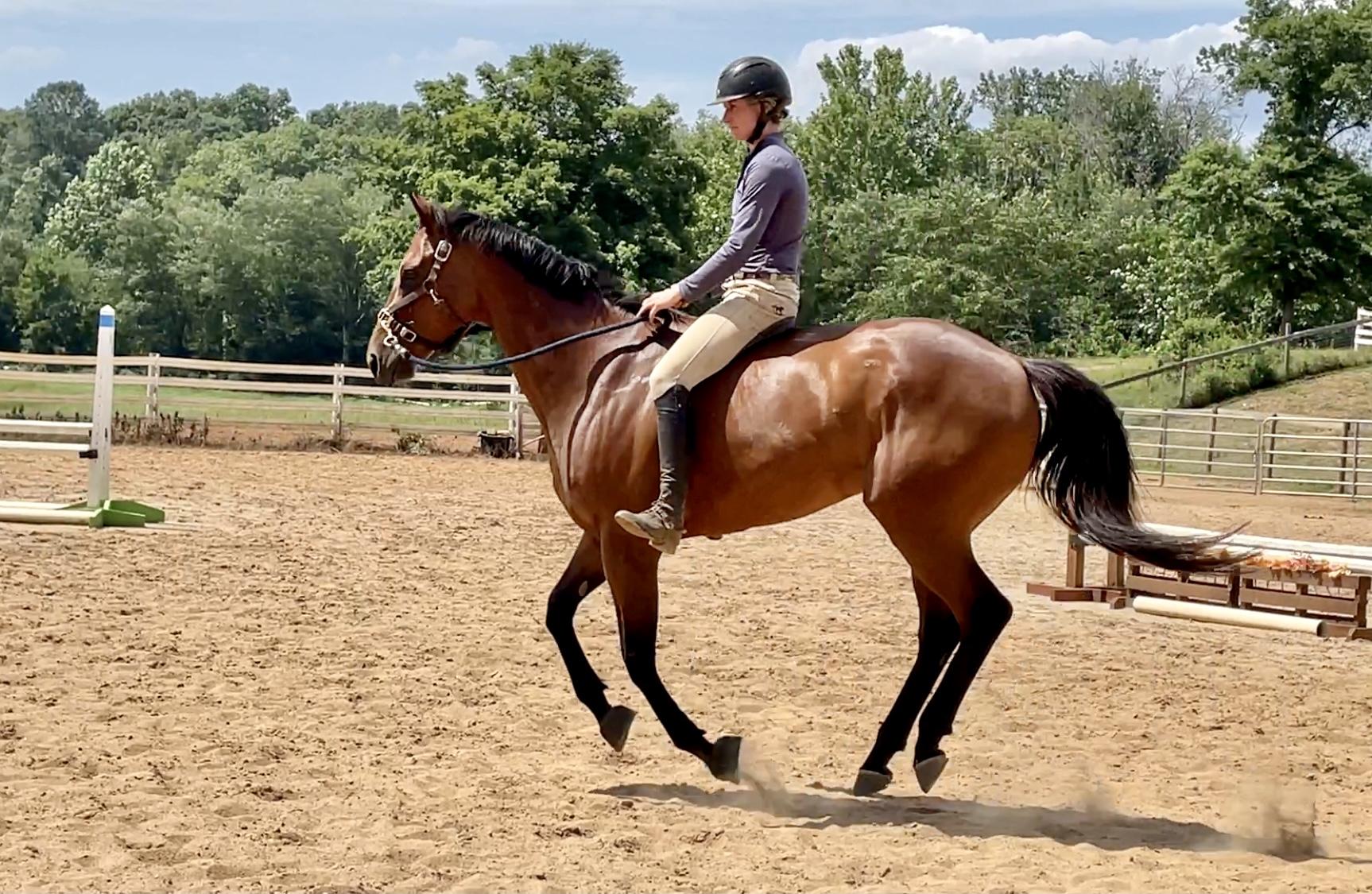 The transition is striking. Back at the end of April, when I hauled Rhodie to his first three-phase at Poplar, he was a dragon. When we rode out with his barn-mates to school, with me teaching from his back, he melted down. He broke into a colicky sweat, planted this feet, tried to slam me into the fence lines, lost his mind, and made ride-along coaching into a near impossibility. 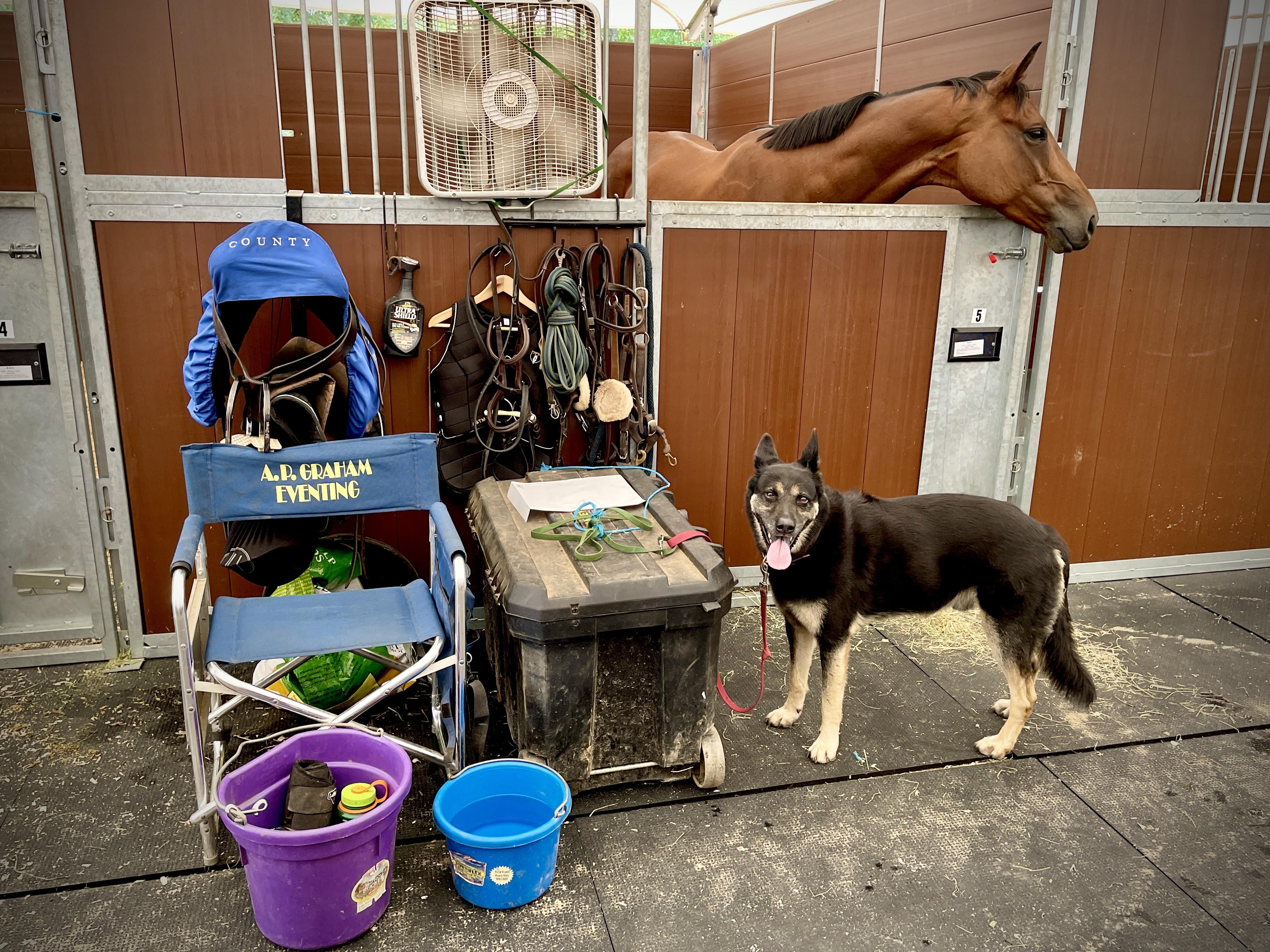 Rhodie and Walker all settled in at Stable View in early July. Photo by Aubrey Graham.

Experience and the (re)focus has paid off. At Stable View two weeks ago, he bopped through all three phases with a new degree of maturity. And this past Saturday, I brought him to Chatt Hills to teach a cross-country clinic. He rode out for two of the sessions, letting me coach from the saddle while horses were blasting away on all sides, splashing through the water, over the fences, and generally wreaking happy havoc. 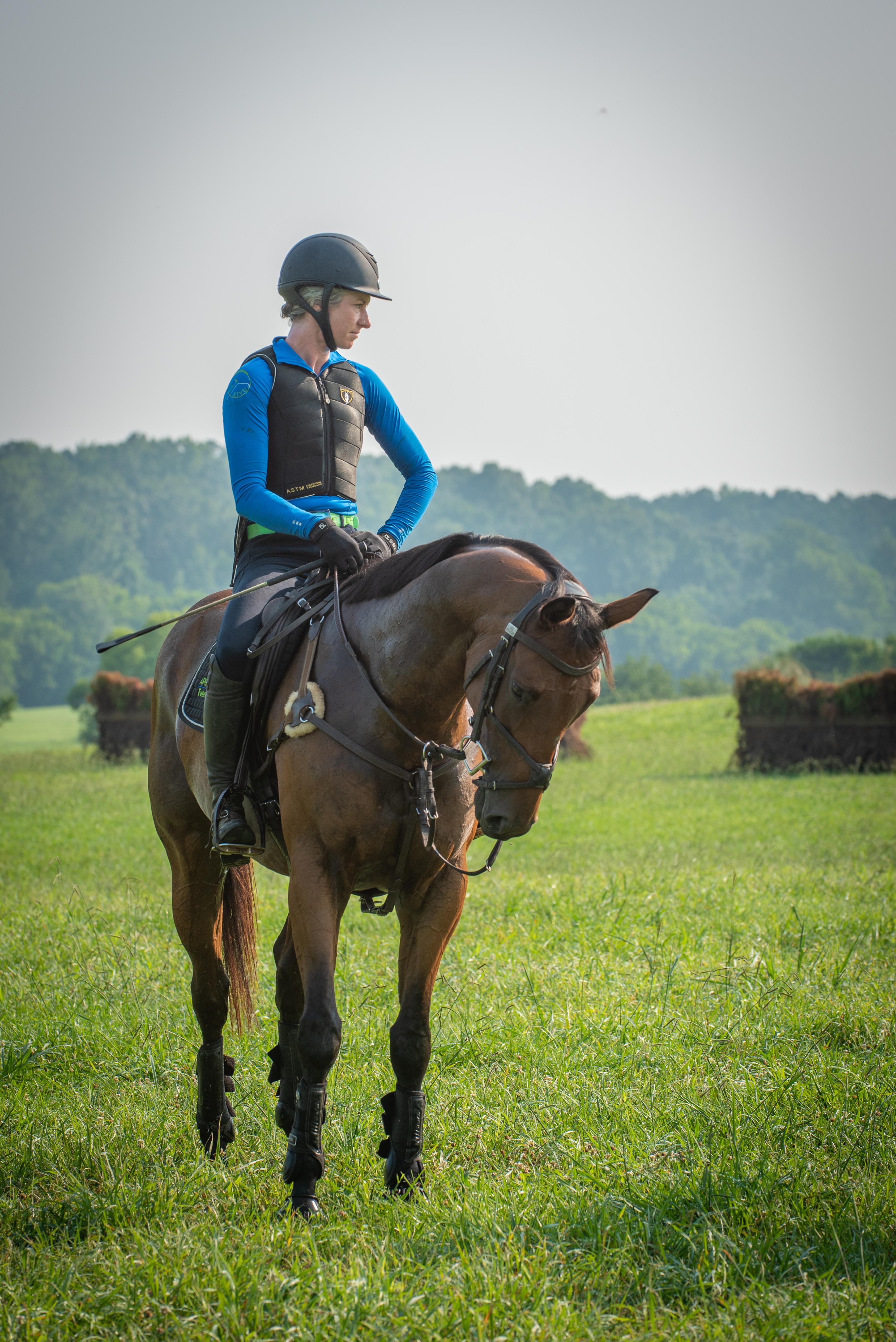 Rhodie being awesome while I coached a cross country clinic at Chatt Hills. Photo by Amanda Woomer.

So now, I send this blog entry off, ready to ride forward into August with slightly more trained concentration. There’s the RRP, there’s my barn and business, there’s Boomer’s and Rhodie’s careers, and there’s life. And I have to tell you, in the midst of all of the mire it was hard to see beyond the muck. But finally being able to sit up, get my eyes up, and kick on intentionally towards the next set of flags feels really damn good. 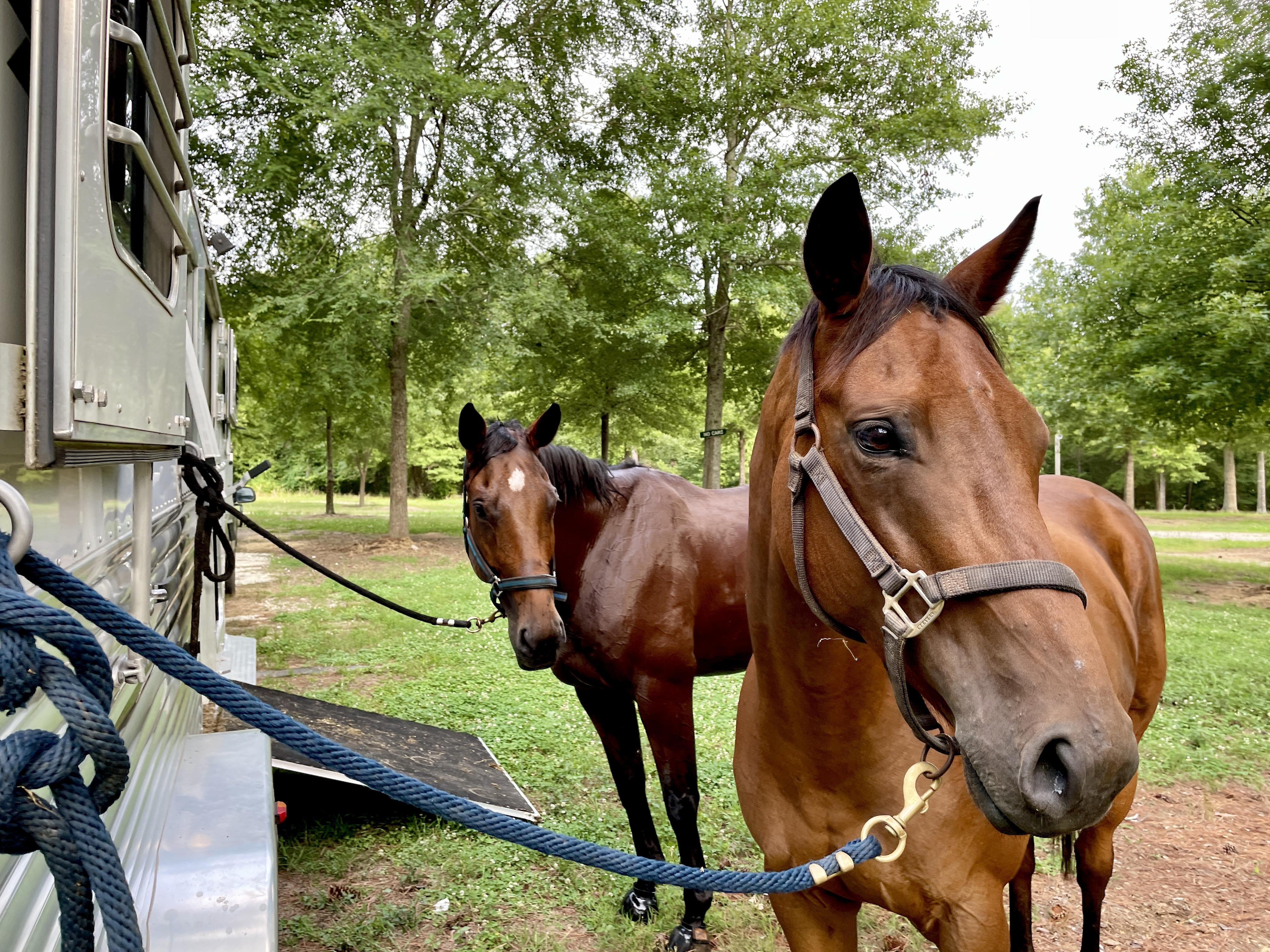 Cousins, Rhodie (right) and Boomer (left) stand tied like good kids at Ashland Farms. I’m looking forward to making more photos like this with these two in KY in October. Photo by Aubrey Graham.