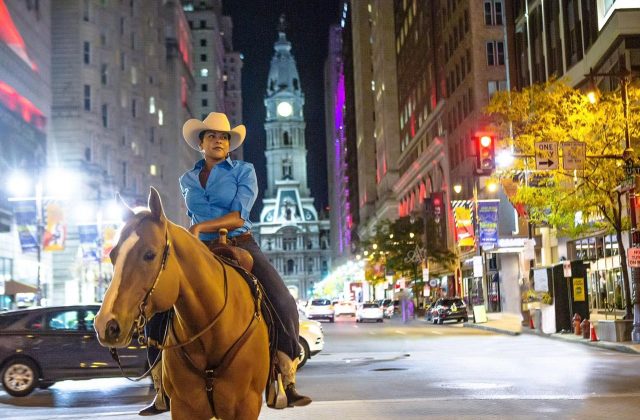 “Not every kid in this city needs to be a basketball or football player… We’re here to give them more options. They can be a grand prix dressage rider, a barrel racer or just learn to love horses.”

“Not every kid in this city needs to be a basketball or football player; they don’t all need to dream about being rappers. We’re here to give them more options. They can be a grand prix dressage rider, a barrel racer or just learn to love horses,” explained Erin Brown, executive director of the Philadelphia Urban Riding Academy (PURA) while her parrot, Coltrane, literally parroted police sirens in the background. “Don’t mind him,” she said. “He repeats what he hears daily.” 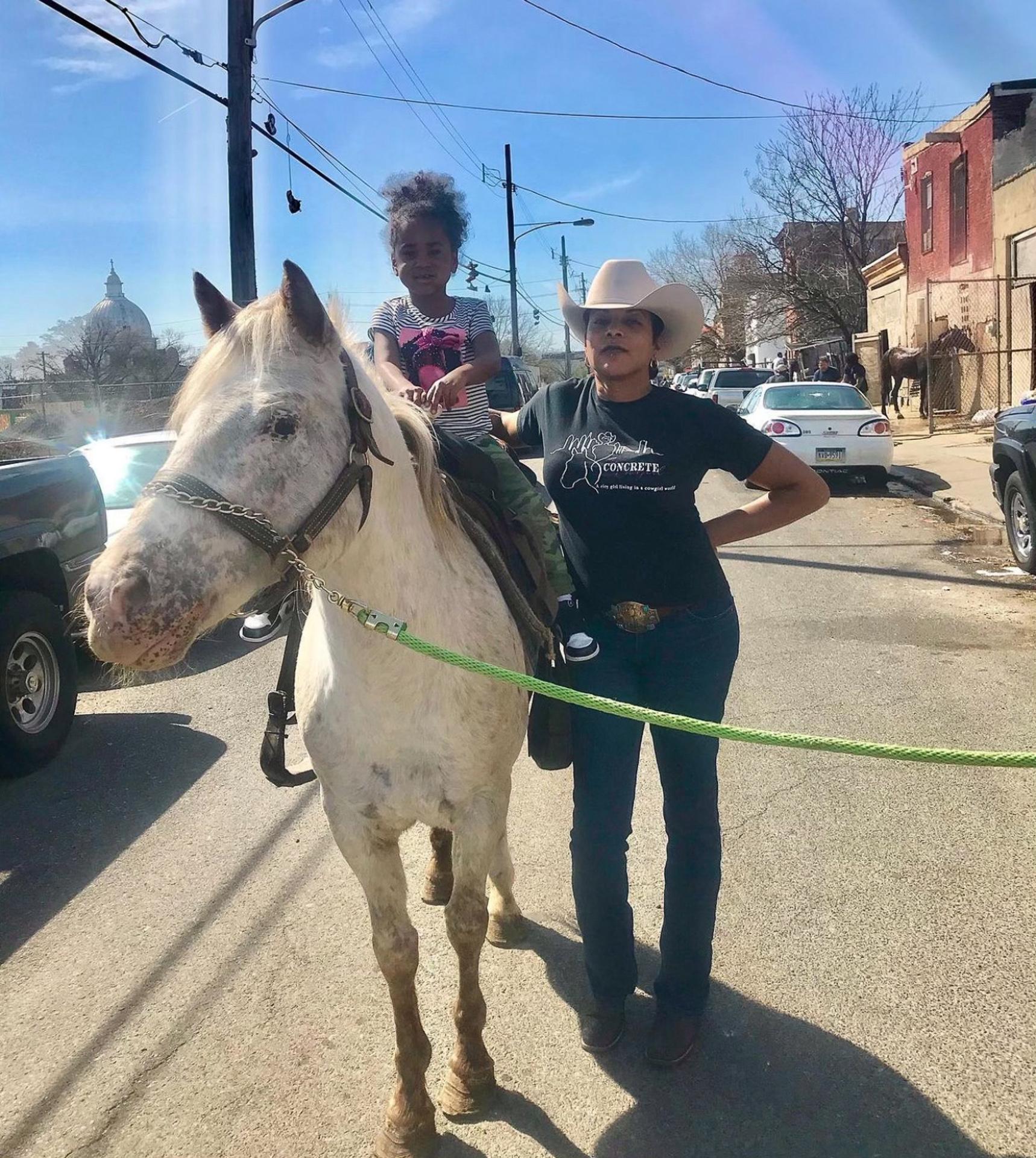 Erin Brown pauses mid-ride with one of her young riders on the Streets of Philadelphia. Photo Courtesy of Erin Brown / PURA.

PURA is a growing project that provides urban Philadelphia residents continued access to horses and the healing and recreation that the four-legged animals engender. The new site, situated in the Cobbs Creek region of the city will feature 20-indoor stalls, a six-stall shed row, a classroom, covered arena and sizable pastures. There, Brown will offer lessons, boarding, and the ability to show in local and national competitions.

At its core, however, PURA is more than just a boarding barn. The academy builds from the legacy of the Urban Black Cowboys and takes horses beyond the property’s city fence lines to reach at risk youth, individuals in hospitals, veterans and the broader Philadelphia community. PURA’s outreach programs also aim to promote black solidarity and make connections with the police to build partnerships in the effort to reduce the rising incidences of crime and gun violence. Brown proudly summarizes PURA as the “New and improved Fletcher Street stables.” 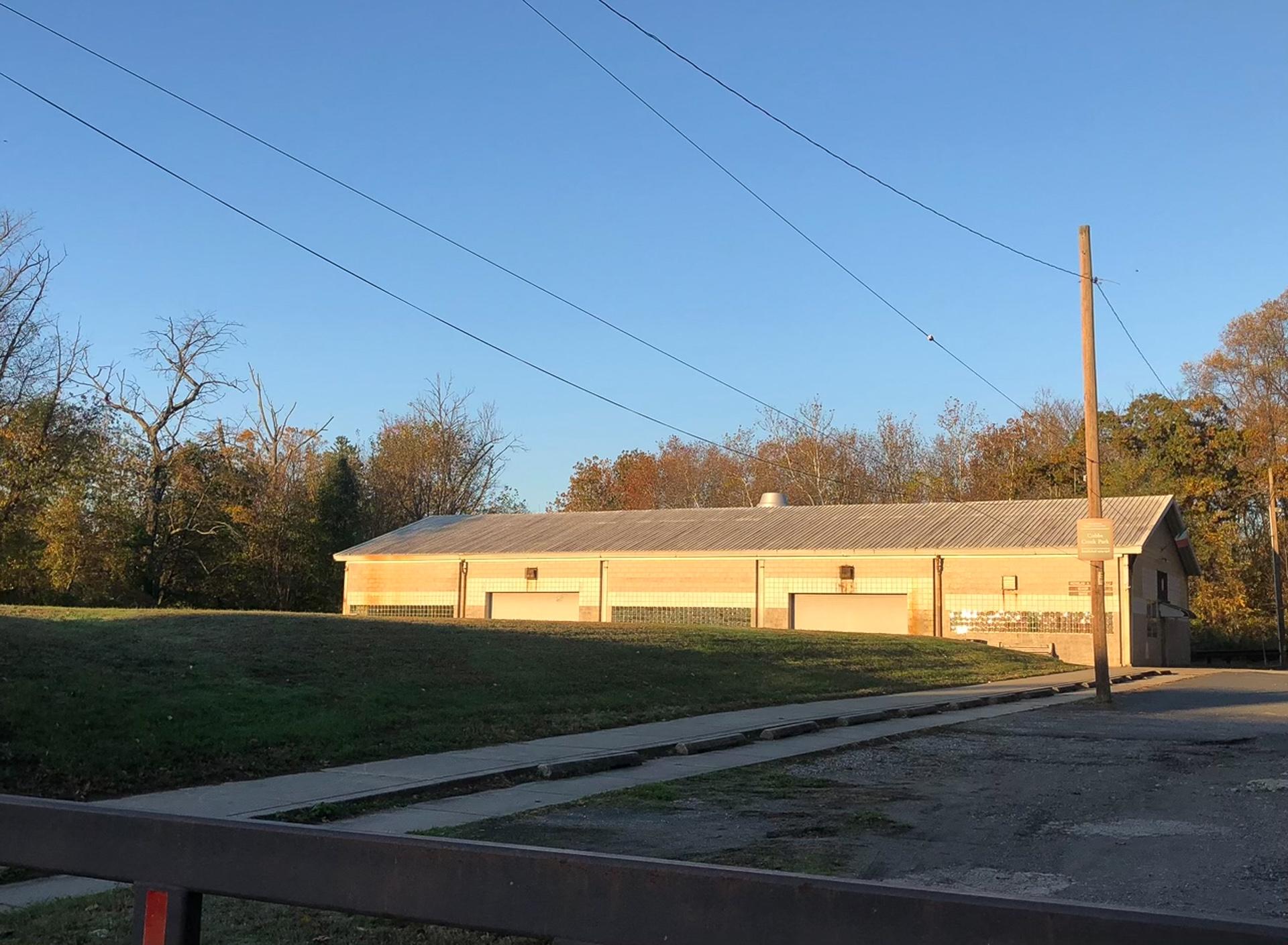 In April of this year, Netflix released “Concrete Cowboy,” a film featuring Idris Elba and detailing the lives and struggles of the horsemen of inner-city Philadelphia. The movie focused on Fletcher Street – the historic site of Black horsemanship and urban stables for more than one hundred years. Today, Fletcher Street’s stables and the inner city riders face the very real threat of losing their hoof-hold in the city to the growing tide of gentrification. PURA, according to Brown, was imagined knowing that Fletcher street would struggle with the changing times. The plan from the beginning was that PURA would be there for the youth, the riders, and the horses, when Fletcher street is no longer able to. 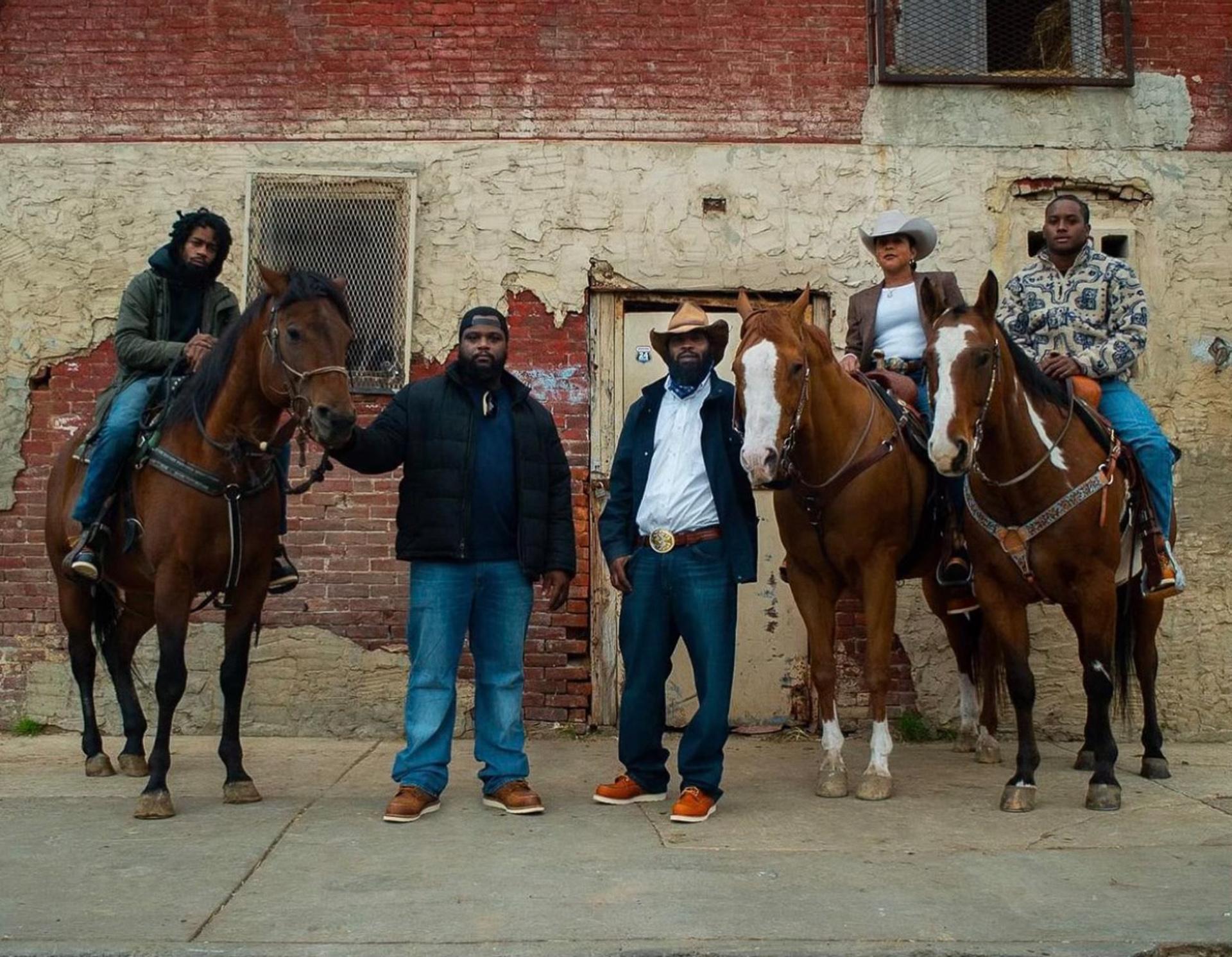 PURA came into being through the collective effort of the late Eric Miller (one of the influential Black cowboys of the region) and the riders of Fletcher Street with the support of Concrete Cowboy film Producers Ricky Staub and Dan Walser, location manager Staci Hagenbaugh, and Spak group CEO, Ryan Spak.

Miller, who in-part inspired Elba’s character in the movie, was a notorious figure in the Philadelphia horse world. Despite time spent in jail, Miller kept more than 20 horses across the various stables on Fletcher Street. With the loose band of equines that he had sourced from local auctions, Miller taught responsibility and healing to community members and youth, while he also participated in the local bush races.

It was Miller’s love for the horses and his desire to have the best of them that led him to get to know Erin Brown. Brown owned one of the best turned-out horses in town, her competition mount, “Kid.” She also had been a longtime barn manager for a stable on Fletcher Street, where she put her knowledge gained through experience and a high school equine science major to work.

That friendship led to business partnerships and eventually led Miller to loop Brown into his vision for PURA. After Miller was killed in a robbery in 2019, Brown found herself written in on PURA’s board in most of the leadership and equine-related roles. “If I wasn’t running PURA right now, Eric [Miller] would probably come back and haunt me,” she laughed. 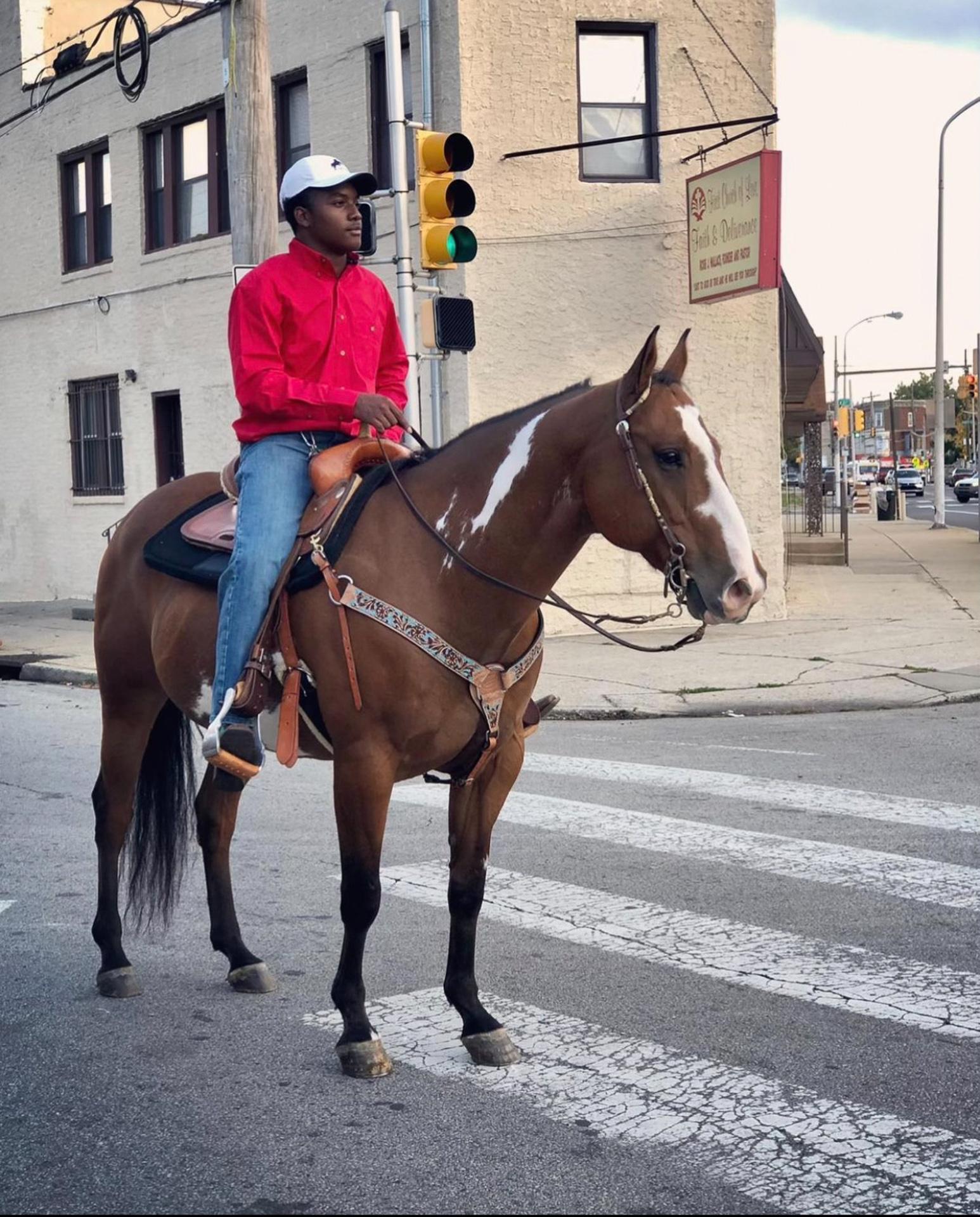 Stephfon Tolbert takes Kool Hand Kowboy for a hack around the Philadelphia, building from Miller’s legacy of not just having horses in the city, but also having good looking flashy mounts out and about. Photo Courtesy of Erin Brown / PURA.

But the path to getting PURA on the road to its urban-community-engaged goals has not always been simple. Brown, who has ample knowledge of horses and the communities that these equines serve, had to learn how to run a non-government organization from the ground up. Business plans, hiring, acquiring materials, support and formalizing the building and grounds of their new location have all been hurdles in the crafting of a beneficial space and set of community programs.

That said, a number of the programs and outreach have risen organically from the community. “Nylah’s Hugs with Horses” epitomizes this evolution. Nylah Thorpe, for whom the program is named, was a rider at Fletcher street and was integral to the early iteration of PURA. Nylah also faced a rare form of brain tumor (DIPG – Diffuse Intrinsic Pontine Gliom). Before the disease took its ultimate toll, Nylah and Buttercup – a feisty six-year old mini horse — crafted an unusual partnership. Buttercup, who refused to stand for the farrier and jumped and skittered at the wind (…the wheelbarrow, the trash cans, well…most things really) would let Nylah lead her quietly up and down the drive in her wheelchair, squeaks, rattles and all. 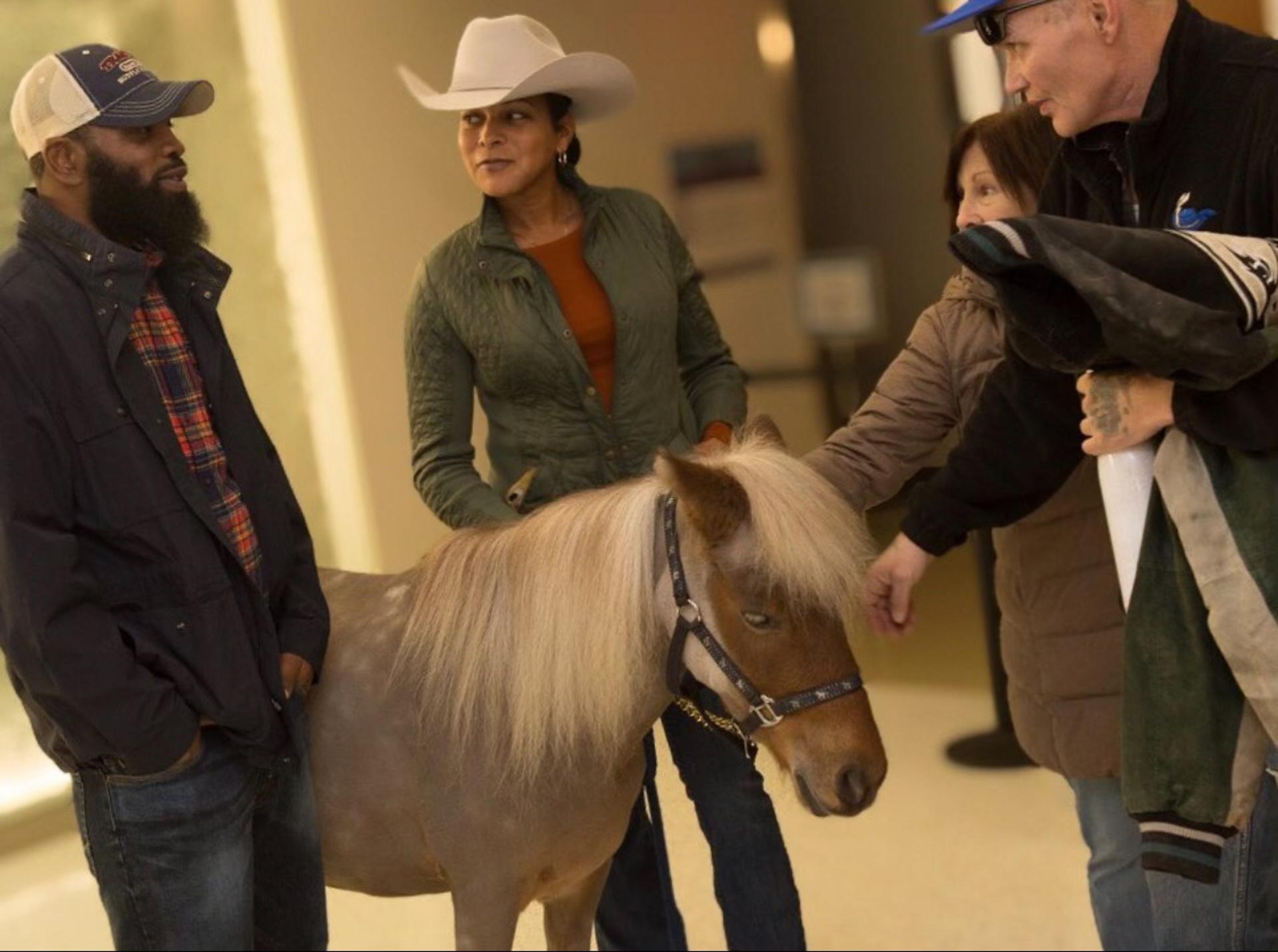 Buttercup out and about engaging with the community. Photo Courtesy of Erin Brown / PURA.

In a turn of photographic serendipity, a picture of Brown riding Kid at one of Philadelphia’s busiest intersections enabled Buttercup, that skittish mini, to continue to make a community-wide impact. The slick photograph was part of a promotion for Brown’s “Concrete Cowgirls” – an all-Black, female rodeo team. While that team is still in the works, the photograph got the attention of Naimah Cann, volunteer coordinator for pet therapy at the University of Pennsylvania. 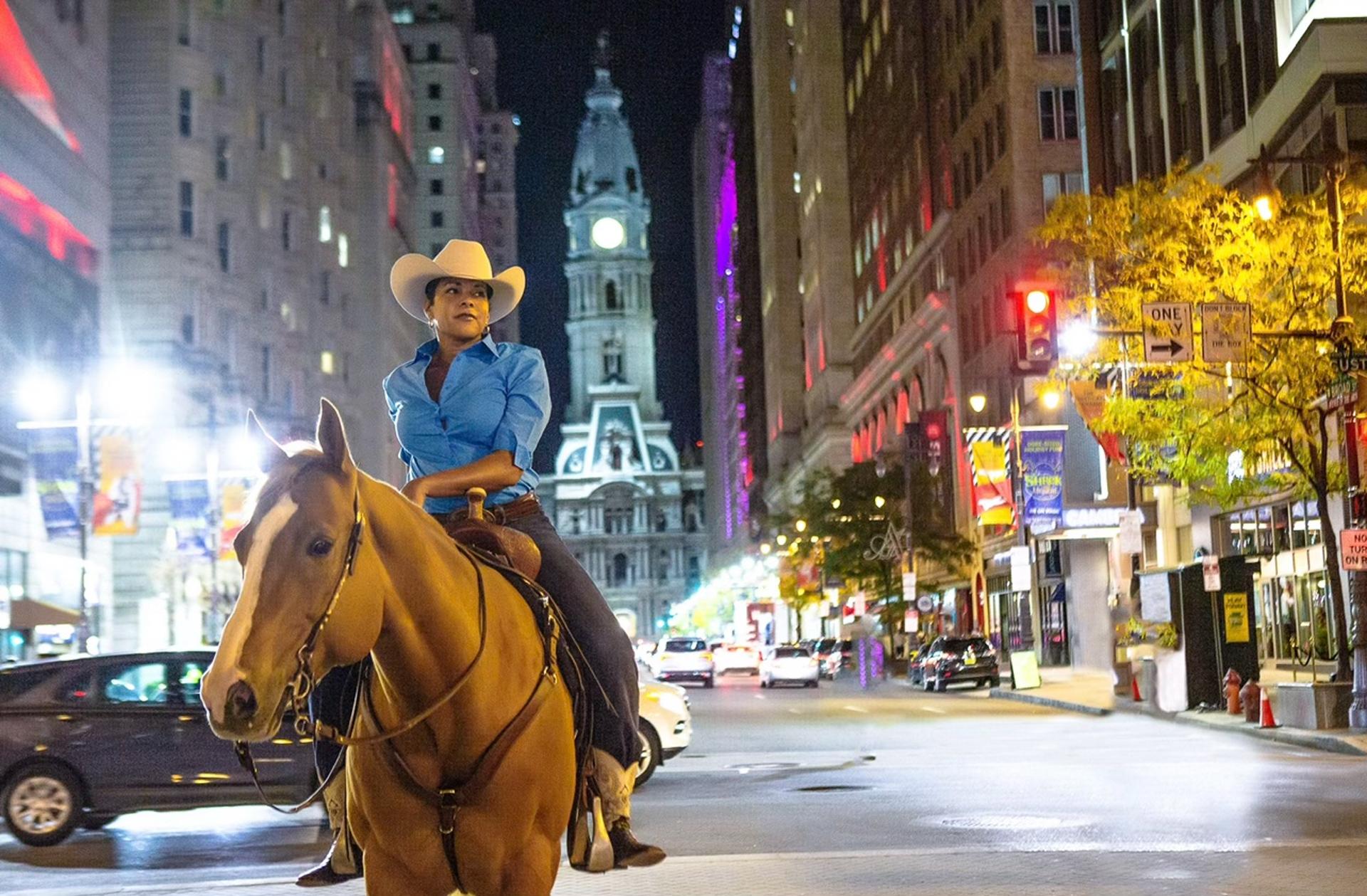 Brown riding Kid in one of Philadelphia’s busiest intersections. This photograph was a promotion for the Concrete Cowgirls – an all-black female rodeo team. Photograph by Ricky Codio, provided by Erin Brown / PURA.

The thought was, if Brown could get a horse onto that street, she could then get a horse into spaces of the local “Mighty Writers” youth clubs and then later into the hospitals. Brown didn’t flinch. She had the perfect, tiny, candidate. Inside the sterile corridors and at the bedsides, Buttercup walked smoothly past the whirring and beeping machines and brings kind comfort to the ill – often placing her head in their lap while her handlers would watch the human eyes light up. 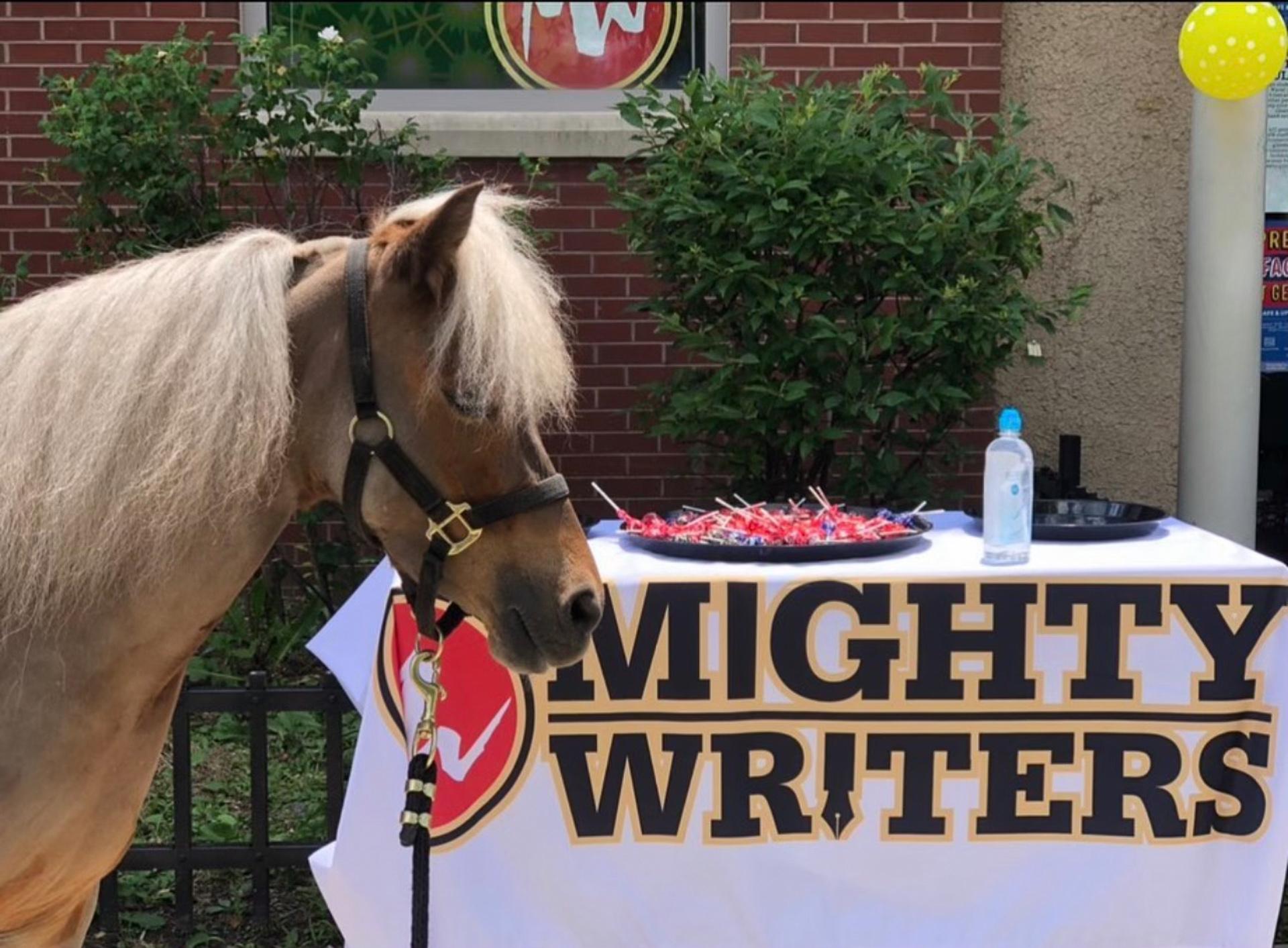 Buttercup at the site of a Mighty Writers meet up. Photo Courtesy of Erin Brown / PURA.

Buttercup and Kid’s mobility throughout the city is representative of Miller and Brown’s vision of PURA. PURA’s new and improved stables are being built about 20-minutes by car from the original stables on Fletcher Street. Brown isn’t worried about the distance, though, as she expects that PURA will both serve as an anchored urban equestrian zone (with lessons, boarding, and competition teams) while facilitating the ability to get horses out and about with the broader community and make an impact. 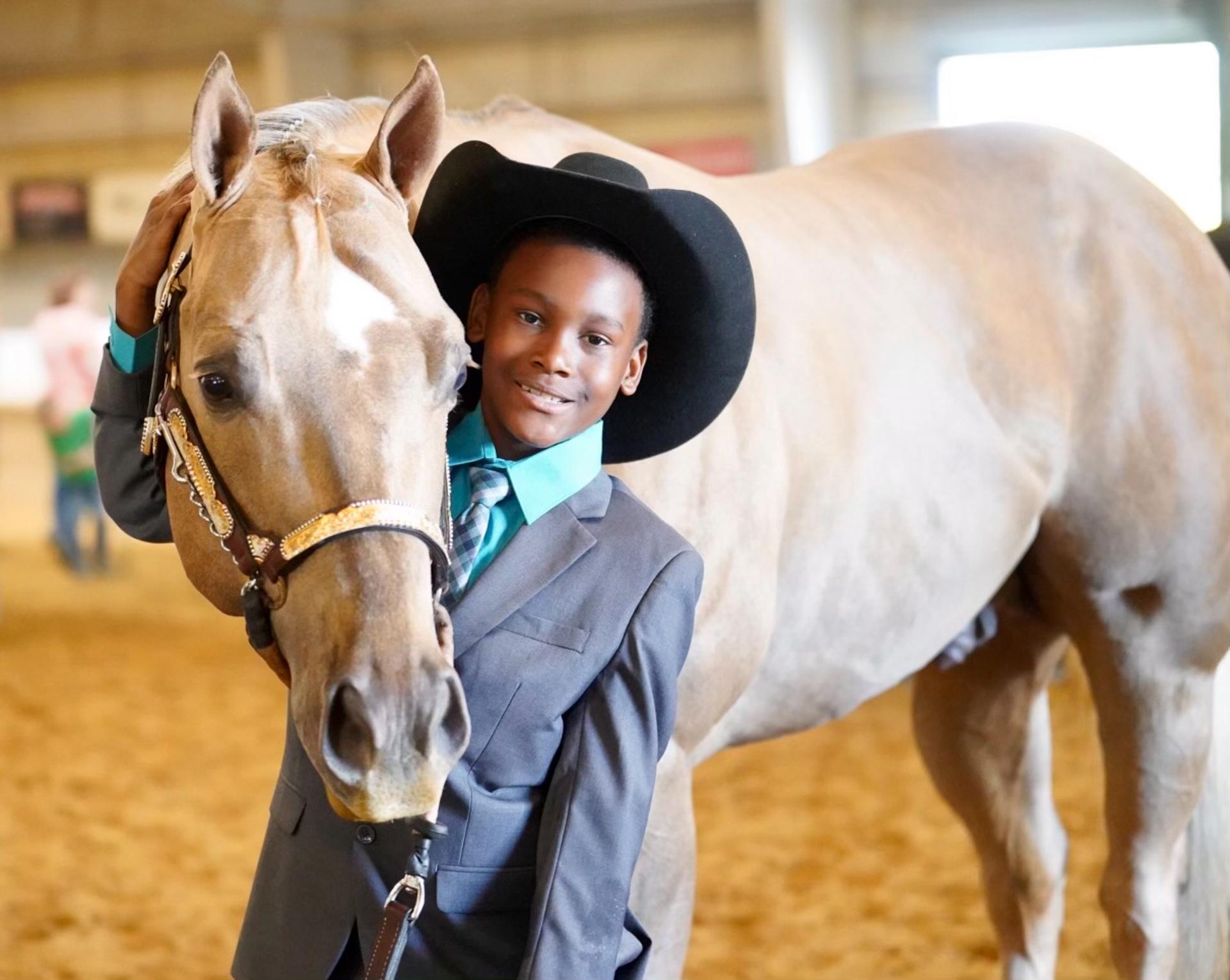 “When I was young,” Brown said, “Kids would get in trouble at home – there was a lot of that. They would leave, run off for a bit maybe, but you could always count on them turning up at the stable. It was the proverbial enactment of ‘the outside of a horse is good for the inside of a man.’” And through PURA, Brown hopes to continue to craft that safe space where Philadelphia’s youth have more options than just the ball or the microphone. She hopes to facilitate dreams, like her own, which might also come complete with the hard work, hooves, soft noses, and the undeniable joy and healing power of the horse.