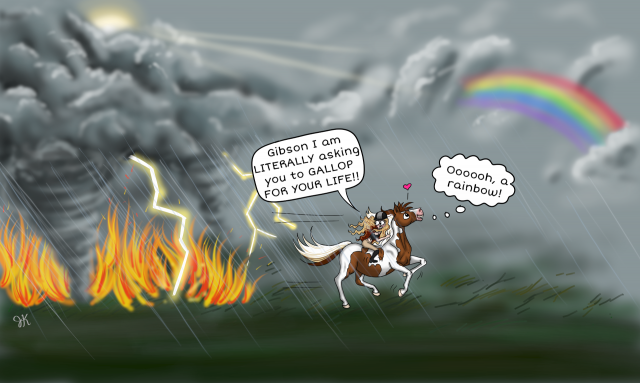 It’s all in how you look at things.

This week’s comic comes with a (true) backstory. From the artist:

I am a grown woman, and I am terrified of thunderstorms. This wasn’t always the case, but here’s how it came to be. Most people who know me personally know this story already, because it’s rather dramatic and fun to tell, despite the absolute terror at the time.

It wasn’t long after Gibson entered my life as a teenager that one of my fellow lifelong horsey friends and I decided to go out for an afternoon trail ride. For context, for other unrelated reasons I was having an absolutely terrible day, to the point where I almost bailed on the ride (and you know I have to be really down in the dumps to consider that). I figured that spending time with Gibson and my friend and her horse could only make my bad day better. Boy, was I wrong.

The first hour or so of the ride were lovely. We rode to a nearby, frequently visited estate with a massive amount of land and horse trails, and I got my mind off of things as we wound through scenic fields and woods. After a while, we started to feel sprinkles of rain and looked up to see the sky growing rather overcast. There was no rain in the forecast for that day, but we figured it might be one of those surprise rain showers that sometimes pop up on humid summer days. We decided to turn around and head back in case it got worse.

No sooner had we exited the woods and began the trek across the large field between us and the estate’s entrance, then we finally got a good, clear look at the sky. Our hilly vantage point allowed us to see for quite a distance, and we realized it was not a pop up rain shower. It was one of those severe, summer pop up thunderstorms, complete with roiling black cumulonimbus clouds and cloud-to-ground bolts of lightning, less than a mile away judging from the length of time between the lightning and thunder, headed rapidly in our direction. The seriousness of the situation hit us both at the same time.

You see, this estate we were riding on was a landmark to the area for many reasons, and one of those reasons was that it was home to the highest point of land in our entire county. And that point happened to be the hill we were currently crossing. In a completely open field, well away from any trees or buildings, with cloud-to-ground lighting less than a mile off. If the storm reached us before we made it to cover, we absolutely would have been the thing the lightning hit. We looked at the sky, looked at each other, and decided to use the small amount of time we knew we had to literally run for our lives.

We took off at a gallop… or at least tried to. Our horses honestly did not seem the least bit concerned. While my friend hollered a run-on sentence of colorful language that would have made an incubus blush a bit, I completely released my reins and was urging Gibson on while singing Carrie Underwood’s “Jesus Take The Wheel” at the top of my lungs in a vain effort to keep myself from panicking. For all that they’re supposed to be able to sense their rider’s emotion and energy, Gibson just couldn’t seem to understand that we actually were in a fair bit of danger. He moved along at what would be generous to call a casual lope, as if admiring the view and lovely scenery.

Thankfully we somehow made it off the hill and under the shelter of a wooded back road just before the storm actually hit us…and hit it did. Rain poured down as if the entire heavenly host had decided to dump and refill their water troughs. We stopped galloping and trudged the last half mile back to the barn absolutely soaked to the skin, tack and all. I was utterly bedraggled and, considering my already emotionally fragile state, more than a bit shaken. To this day, a good loud thunderclap or flash of lightning makes me nearly jump out of my skin and sends me running for the nearest pile of blankets. 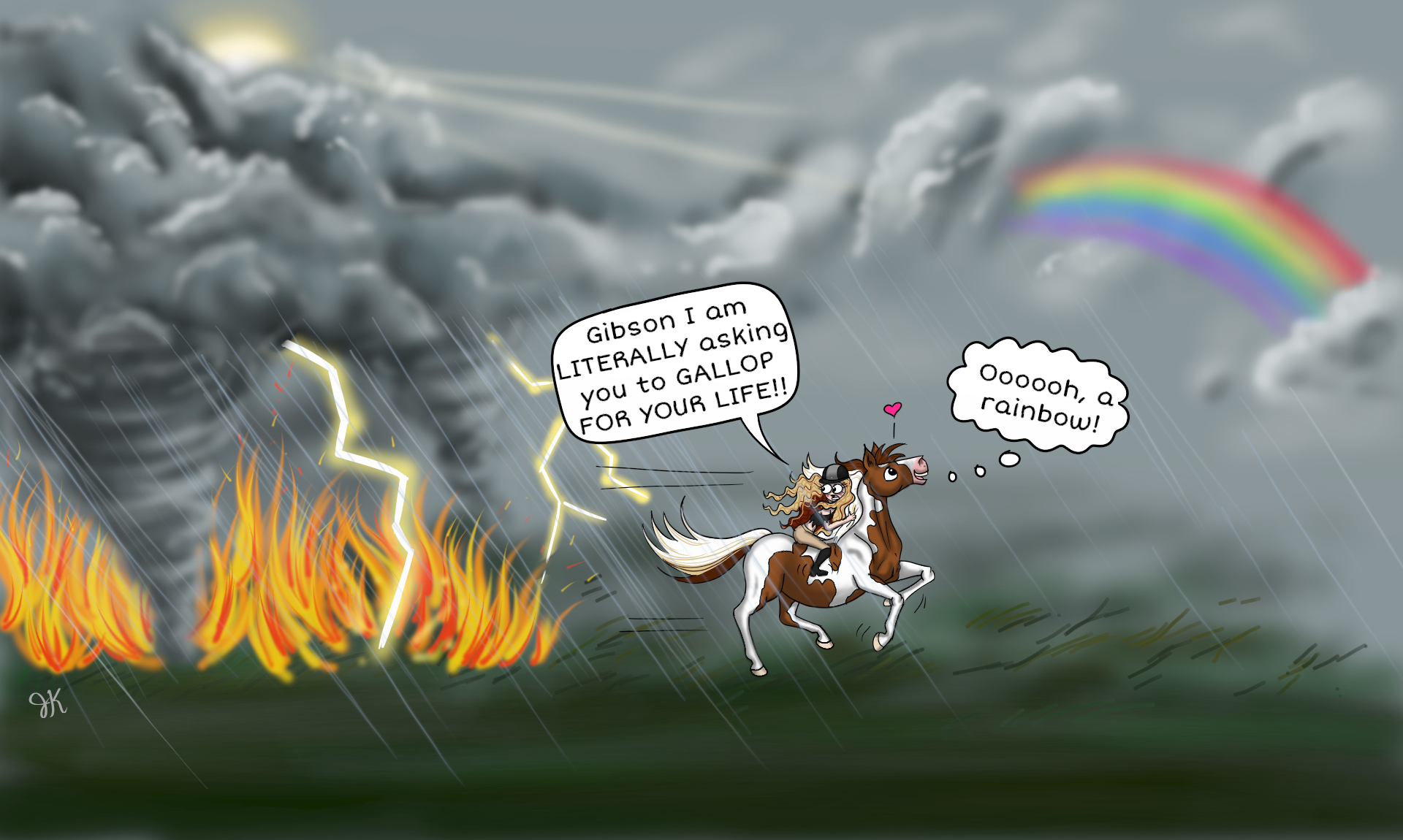