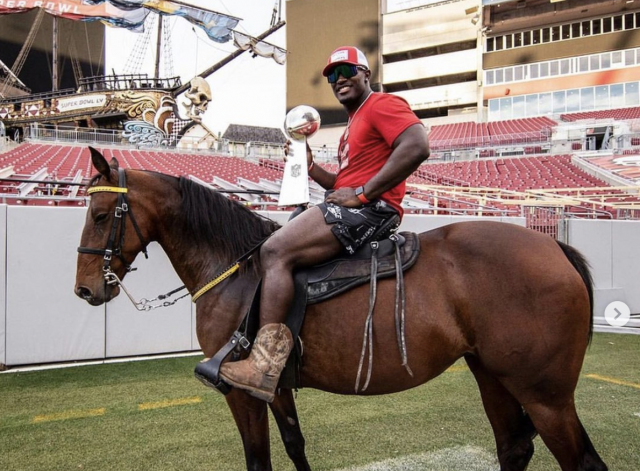 February 15, 2021Sally SpickardSally Spickard#CELEBRITIES, FootballComments Off on This Tampa Bay Linebacker Celebrated His Team’s Win With His Horse

You’ve just won the Super Bowl. What are you going to do? Take a victory lap on your horse, of course.

What do you do when you win the Super Bowl — in your team’s home city, at that? You hop on your horse and take a victory lap.

At least, that’s how Tampa Bay Buccaneers inside linebacker Devin White decided to celebrate the team’s victory over the Kansas City Chiefs in this past weekend’s Super Bowl LV. It was something Devin had planned on doing should his team pull off what was largely considered an upset over Kansas City.

“If we get the W, I don’t care what they say, I’m pulling the horse out, I’m going to hold the Lombardi Trophy and I’m gonna ride around,” he told reporters before the game. And a victory lap did he take, hopping aboard his horse Dream to do the honors.

Horses have been a big part of Devin’s life, even as he juggled the demands of playing football at the most elite level as a member of the Louisiana State University Tigers. “I just ride and love. They’re like my kids,” he said at one point. “I don’t have any children, but those horses – I go give them carrots, take them on walks and rides. They’re like my children.”

It was a bug that bit him early on, when he was just five or six years old. Devin grew up in Springhill, Louisiana, where horses were a part of everyday life. It was a friendly neighbor who allowed Devin to have his first taste of riding, and from there the rest is history. The day after that first ride, he went back to his neighbor to ask for more lessons.

Football is a demanding sport, but Devin has always found a way to take some space for his horses, too. For him, horses are a solace – a place to get away from everything and have some quiet solitude. “I feel like I’m in heaven on earth when I’m with my horses,” he’s said. “No distractions, no phones, no football.”

These days, Devin can be found on his social media promoting his life’s two biggest passions: football and horses. It’s a unique “soft spot” to find what most would consider to be a big, tough, brawny man who finds solace and peace with horses. Or maybe it isn’t all that unique – football players are often labeled “thugs” or “arrogant” or “showy”. But more often than not, they are just (supremely talented and athletic) humans – and sometimes we all need a little peace and quiet.