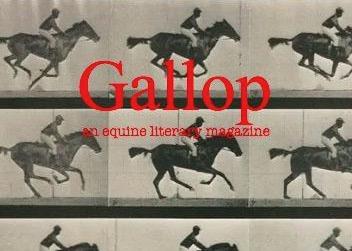 Introduced by author Jody Jaffe, Gallop is a new breed of horse magazine where “the confluence of horses and art meet.” Launching in 2021, Gallop will be published online and available for free. 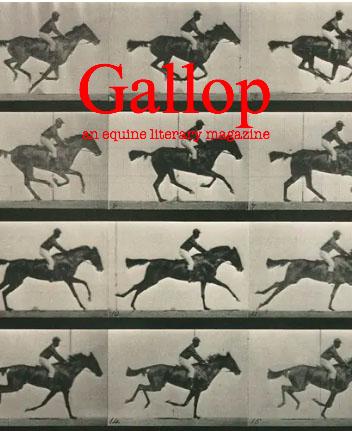 “If you had a Venn Diagram with one circle of horses and one circle of arts, where those two circles intersect, that’s Gallop,” said author and journalist, Jody Jaffe, describing her latest venture – Gallop, an equine literary magazine as a “smattering smorgasbord where the confluence of horses and art meet.”

Gallop, which is currently slated to debut spring 2021, focuses on creative works – short stories, creative non-fiction, such as memoirs, art, movie reviews, book reviews, “anything in the arts,” Jaffe noted. The magazine will launch as a quarterly, with a possibility of going monthly, dependent on copy generated and submissions received. Gallop is free and will publish online, with a “pay-to-print” option. It follows a template similar to that of Wine, Dine and Travel, a free food and travel magazine Jaffe also writes for, with over 300,000 subscribers. The first issue will feature a new mystery series, “Commander Speaks,” by Jaffe herself, who’s known for writing the Nattie Gold horse show mystery novels in the 1990s, a comic strip about two elder horses who find love late in life, “The Adventures of Trilby and Rio” by Pulitzer-prize winning cartoonist Ann Telnaes, a memoir about Marilyn Monroe and a horse named Golden in 1950s New York City, another memoir about a girl going to the racetrack with her father and a prose poem about the four horsewomen of healing – a riff on the four horsemen of the apocalypse.

Why a literary magazine? “Because,” explained Jaffe, “there’s a million horse magazines but there aren’t any literary equine journalists – I’m a writer, I’ve taught fiction writing, I’ve taught journalism and I’ve published five novels.” Jaffe noted that she “rarely sees anything about horses,” in literary magazines and thought, “well, I’ll start my own. My two leading passions in life, besides my children and husband, are words and horses so it’s the most natural, organic thing. I love horses, I love reading, I love writing [it] seemed like a good idea to blend them. We horsewomen, I’ll speak for myself and my friends, we can spend hours talking about horse minutiae, so I thought horse people would love the opportunity to read high-quality pieces about horses.”

Jaffe had been wanting to do a literary magazine for 10 years, but it took the pandemic to get her to launch Gallop. “We’re very locked down here in Virginia,” she said, “and I could play crossword puzzles all day or start a magazine and it seems a lot more fun to start this magazine.”  Jaffe added, “I’m extremely excited about this venture because it’s marrying the two great loves of my life! I think it’s really going to be a fun, exciting magazine and it’s been something I’ve wanted to do forever, so, thank you pandemic, we’re locked down because we’re old and don’t want to die.” Laughing, she added, “And it’s the one good thing to come out of it. That, and I perfected making sticky buns!”

Jaffe hopes readers enjoy the magazine, saying, “Why do we ride? Because we love it. Why do we read? Because it transports us to other worlds. If I’m not outside riding, I’m going to be inside reading about it. Reading takes you to another world and that was always my place where I went as a little girl, to read. We also have a feature asking readers, ‘what was your favorite horse book as a kid?’ For me, it was Misty because I grew up in an inner-city, not very rich, in fact poor, and there was no way I could ever have a horse, but reading, I’d concocted a scheme that I was going to go to Chincoteague as a 10-year-old and buy a Chincoteague pony – of course it never happened, but it gave me hope I could have a horse!”

The most rewarding part, for Jaffe, has been getting to “immerse myself in horse for eight to ten hours a day – I get to talk to people about the two things I love most, horses and words.” But, launching a magazine isn’t without challenges: “Putting it in a format that can go from my brain to the computer,” is the biggest challenge, Jaffe noted. She and her husband have spent hours watching tutorials on how to put together a magazine and Jaffe has also collaborated with the editor at Wine, Dine and Travel. The other challenge, “I’m not constitutionally set up to tell people that their piece really isn’t what I had in mind,” Jaffe said, “That’s my least favorite part. But, there are times when I have to say, ‘thank you, this is well-written but not what we’re looking for.’ If I could just run everything I would, but I have a certain vision of what I want and I really want to keep to that.”

Gallop doesn’t yet have a website – that’s still in the works. Until the website is up, readers can follow it on Facebook. Submissions can be emailed to [email protected] – there’s no word limit, “but don’t send me your novel,” said Jaffe. “I’m not going to read it, though I’d consider a chapter or two!” The only guideline is that it’s literary (e.g. short stories, memoir, prose/poems, photography, art) and one’s best work. Jaffe isn’t earning any money from Gallop herself but Gallop can presently pay a small amount for submissions. “I’m not doing this to make money,” she said, “I’m doing it because it’s a passion of mine!”