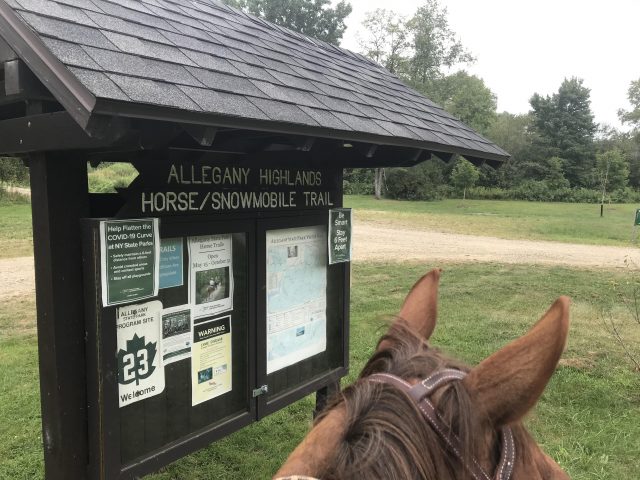 With 55 miles of trails, overnight options and interconnecting loops, Allegany State Park in Red House, NY has a lot to offer as a trail riding destination (and the trails are open through the end of this month!). Kristen Kovatch shares her trail review. 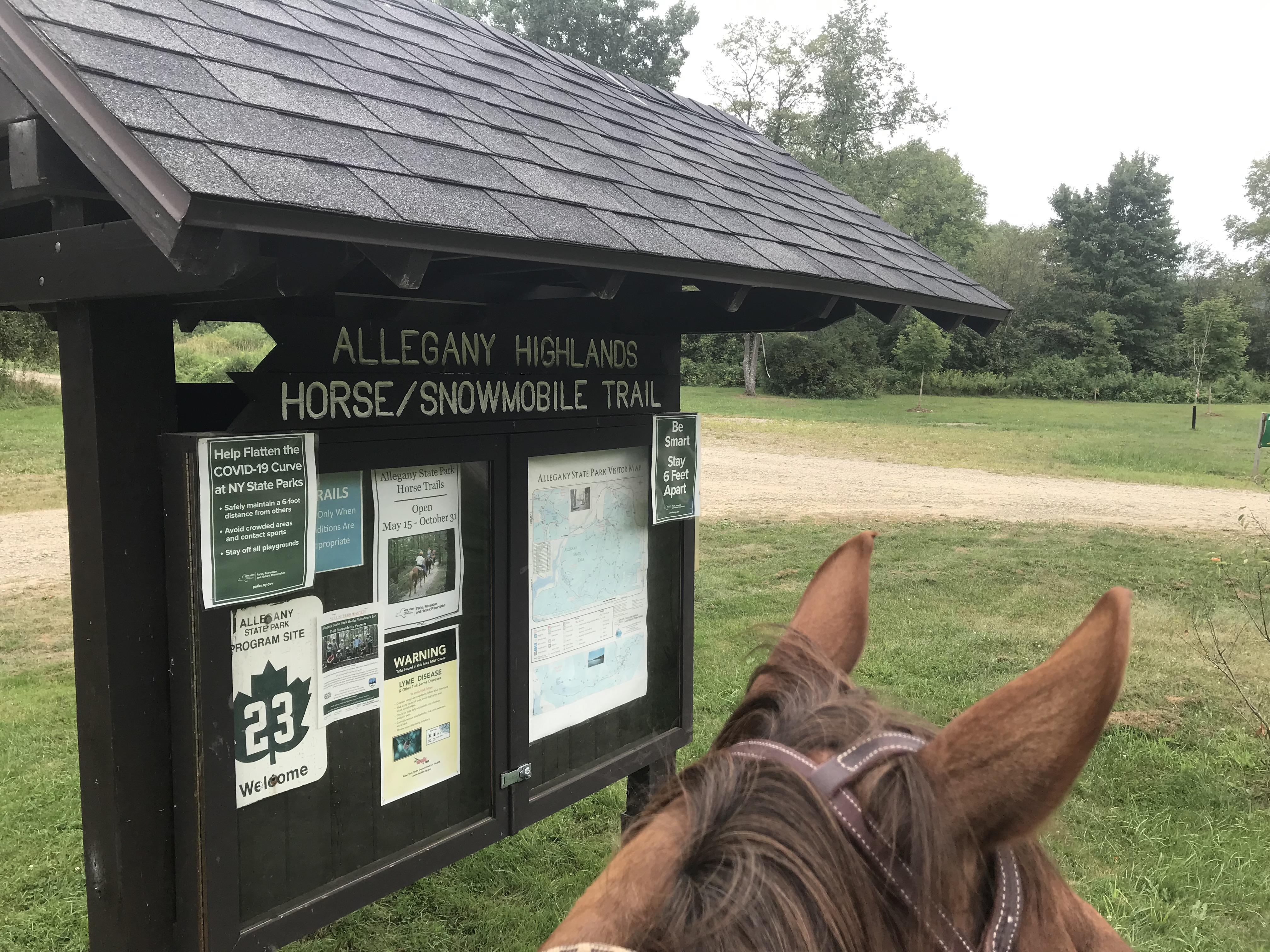 Jobber at the Horse Camp at Allegany State Park. Photo by Kristen Kovatch

Allegany State Park is divided into two areas: the Red House area and Quaker area. The equestrian trails are mapped using the Horse Camp as the base for parking and camping. I come into the park via I-86 in New York, which has a designated exit for the Red House area and is very convenient for easy on/off right into the park; the Horse Camp also looks like it’s relatively easy to access from the park’s south entrance as well as the Quaker entrance.

Horse Camp has ample parking for day use, as well as several overnight sites with set-ups to high-line and areas to park contained camping trailers. There’s also a small barn with tie stalls for overnight use. The Horse Camp includes a mounting ramp as well. 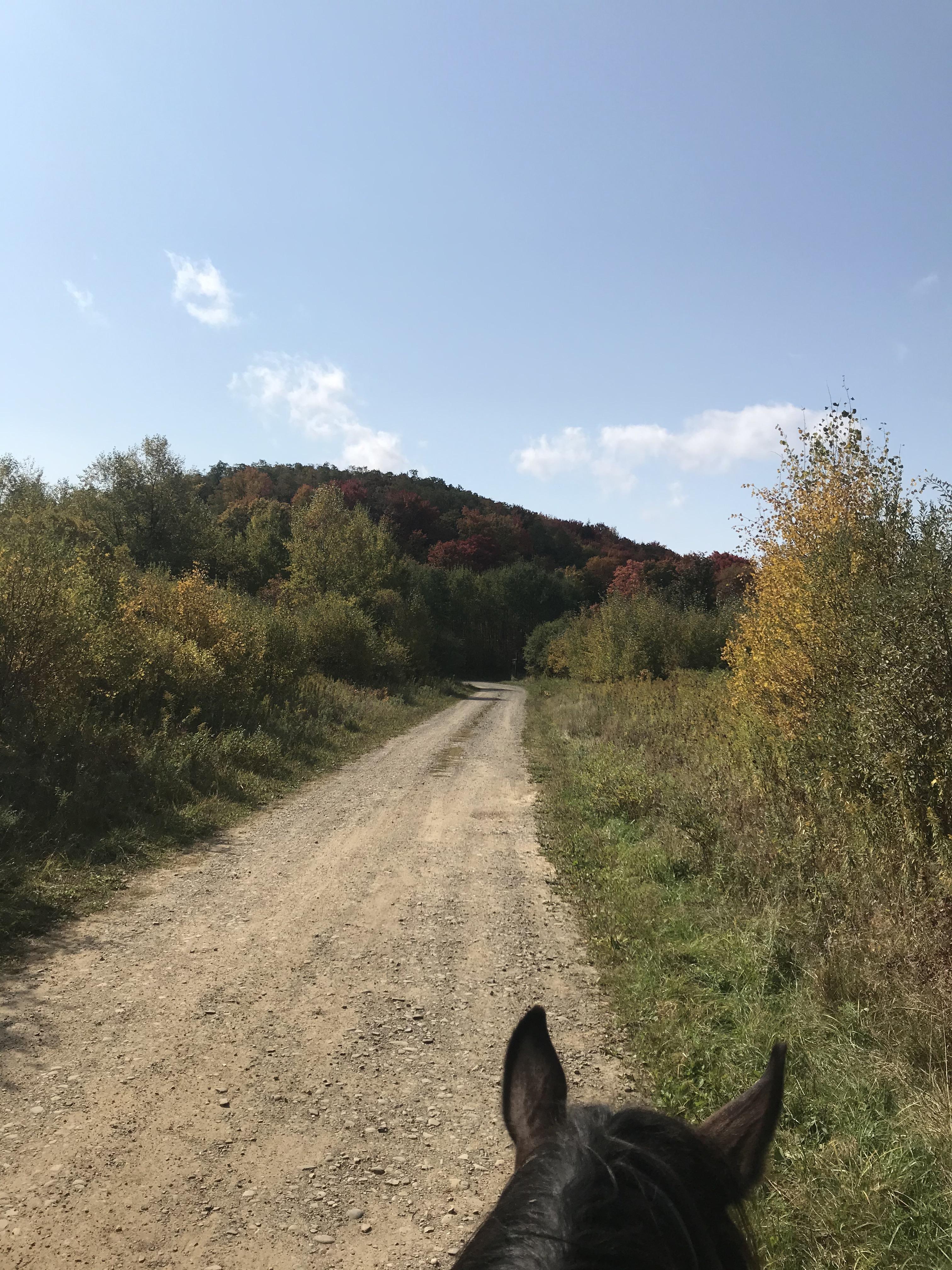 A beautiful September day with Shorty. Photo by Kristen Kovatch

Overall impressions: This is a great riding destination that benefits from state-funded maintenance — most of the time (I’ll get to this later). It’s easily accessible from multiple regions, and with the overnight camping options, one could easily make a full weekend of riding with 55 miles to access.

I’ve taken two recent trips to Allegany in August and September, and hope that my experience will encourage you to hit the trails yourself!

With 55 miles of trails, even on a busy weekend you feel like you have the park to yourself as far as other riders are concerned. There are several routes out of Horse Camp to get you started that then link with other looping trails all over this part of the park. In August, we crossed paths at a trail intersection with a pair of riders, swapped some trail notes, and then carried on in opposite directions and never saw each other again. In September, we left Horse Camp at exactly the same time as another pair of riders, struck out in opposite directions, and then happened to get BACK to Horse Camp at exactly the same time having never seen each other out in the woods. You will likely see a car or two on the sections of trail that double as roads, especially if you ride into the Thunder Rocks area — a popular hiking destination. You’ll also hit park traffic on the tiny sections of trail that run along the main park paved roads, but most park users are pretty respectful and expect to see horses in those sections. 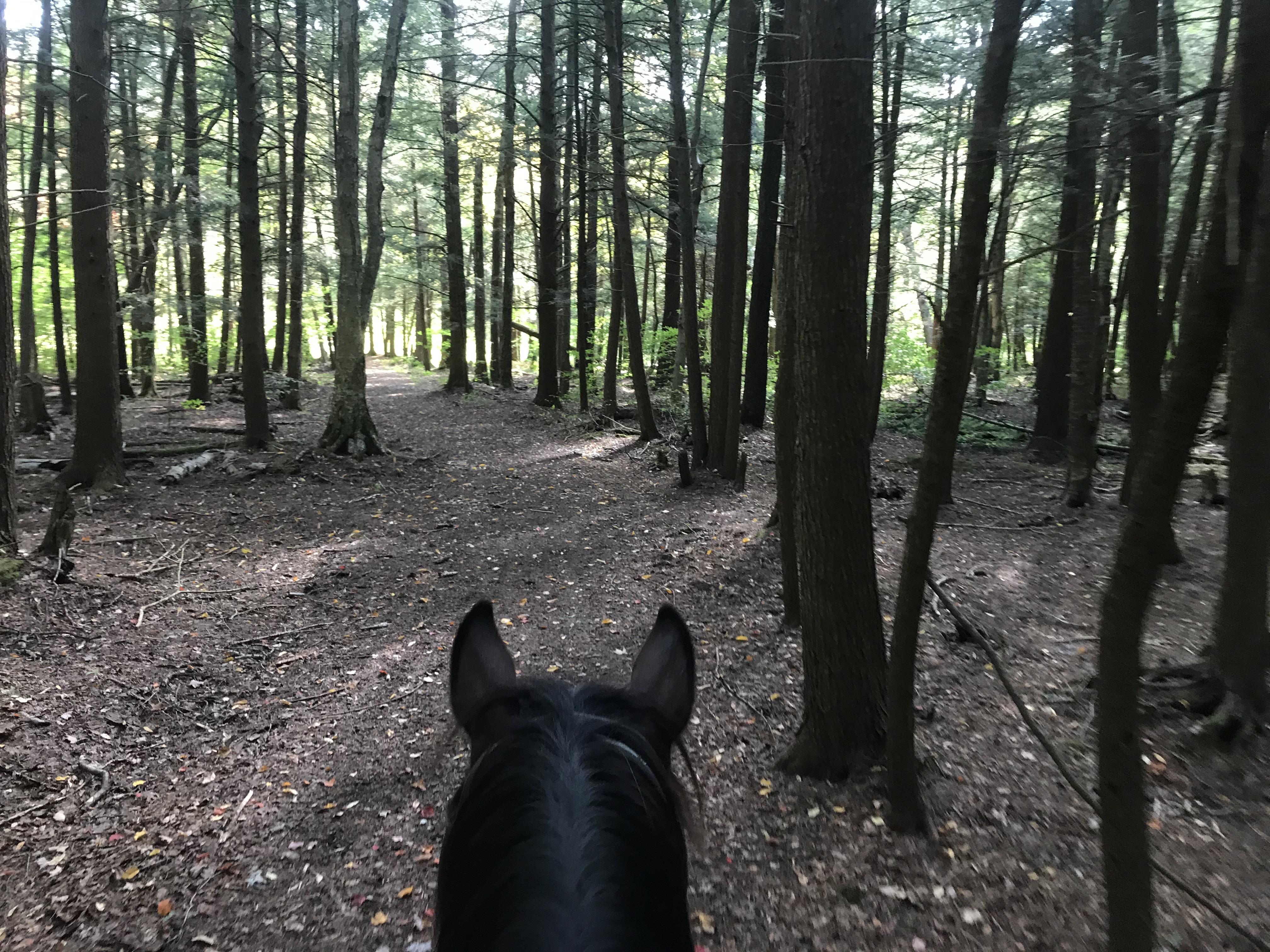 Into a cathedral-like pine section with Shorty. Photo by Kristen Kovatch.

State park maintenance generally keeps these trails in great shape. Other than a few occasional wet spots, you won’t be slogging through knee-high bogs or constantly clinging to your horse’s neck to get under low limbs, with the exception of recently-downed timber that may require a workaround (see my note below on the limitations of park maintenance).

There’s a wide variety of trail types to keep your loop interesting, and to accommodate all riders. Some of the horse trails double as dirt/gravel roads, and some of them also double as gas well maintenance roads. You’re unlikely to meet up with traffic on the gas wells roads, as long as you’ve got a good-footed horse that can traverse some fresh stone laid down for large equipment. There are also plenty of places deeper in the woods that are exclusively equestrian trails, some of which have some challenging terrain up and down big hills and others that are a little easier on the horse and rider. The wider sections of trail double as winter snowmobile trails, which offer some nice areas to ride side by side and also to move out at a rolling canter should you desire. 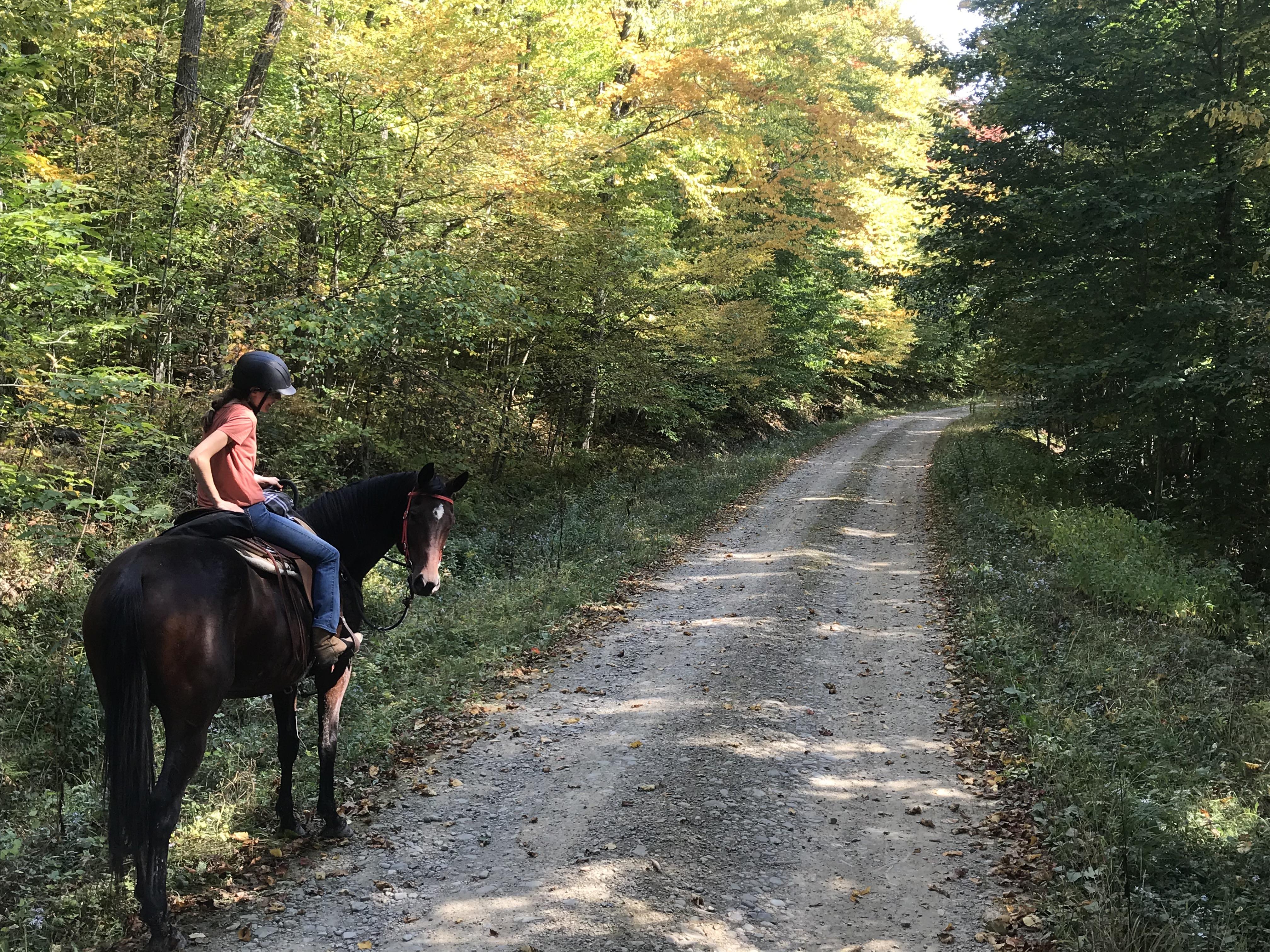 Pausing along a gravel road with my friend Tessa and her mare Ellie. Note that the gravel roads may present a bit of a challenge to barefoot horses, and there isn’t always a lot of soft shoulder on which to ride. Photo by Kristen Kovatch

The looping system means that you can build your own ride visit after visit. In the course of a whole camping weekend, you might be able to hit up some of the further loops and conquer a good percentage of the park, but generally speaking, I’ve still got miles and miles of new trail to discover next year when trail riding season opens up again. If you’re looking for deep-woods remote riding, know that you will have to spend at least a few minutes on some of those multi-use roads to get from section to section, but if you want to “get away from it all” you can definitely put yourself back into the forest pretty quickly.

The wide, improved sections of trail in particular feel very green-horse friendly — there’s just enough physical boundary that you don’t feel like you’re going to go winging off into the forest, but it’s not so closed-in to make an inexperienced trail horse anxious. 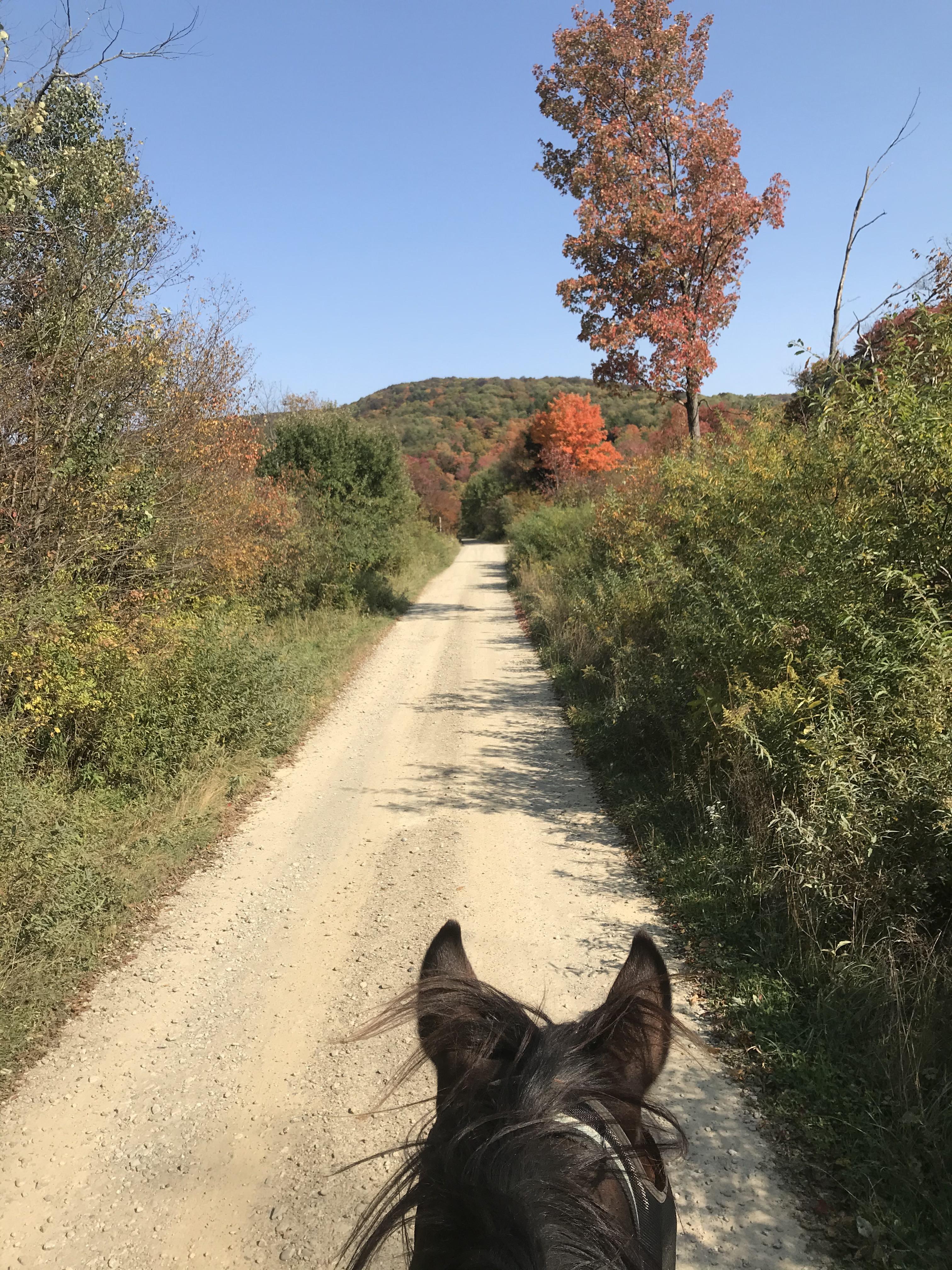 Riding along the beaver ponds with Shorty. Photo by Kristen Kovatch

I’ve yet to find a breathtaking vista. To be fair, I’ve not explored some of the outermost trails, which do have a few “Scenic Overlook” spots highlighted on the park map. I did spend a lot of time on my most recent ride trying to find an overlook that SHOULD have been about where I was looking according to the map, which made me wonder exactly how accurately-printed the map was. The trails themselves are lovely, winding through cathedral-like forests of pine and hardwood or meandering through valleys with beaver ponds and glimpses of other hillsides over the low growth, but there’s no big ta-DA! moment… that I’ve found. 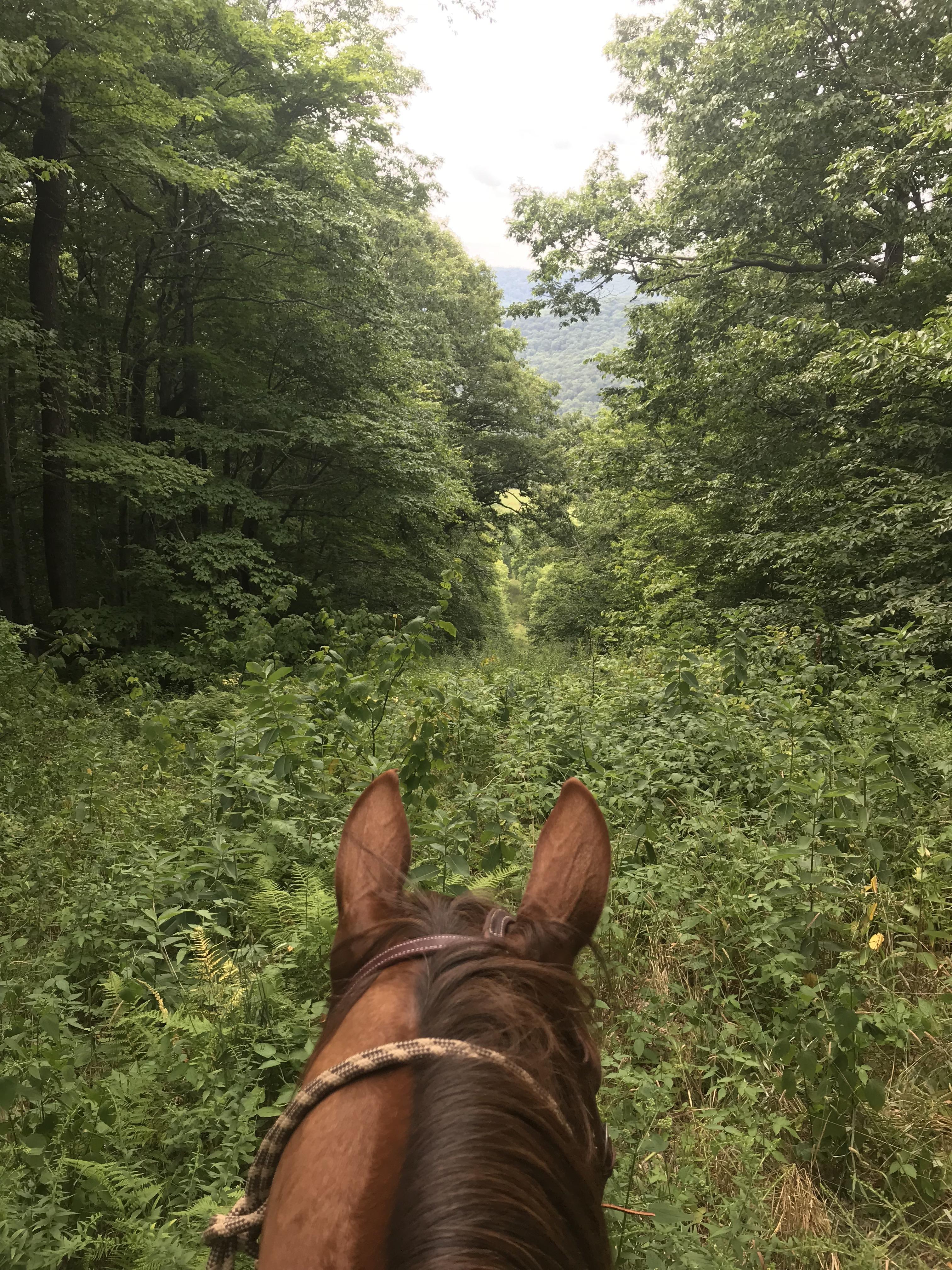 I mean, if you sort of look THROUGH the trees, you can see across to the opposite ridgeline… Photo by Kristen Kovatch

While the trails are clearly marked and generally really well-maintained, park maintenance is not infallible. My most recent trip to Allegany State Park was a few weeks after an epic windstorm that took down a TON of trees on one of the relatively-newer sections of trail. With over 60,000 acres to maintain, including miles and miles and miles of more frequently-traveled hiking trails plus paved and unpaved roads, I totally get that park maintenance has its hands full keeping trails clear, but we had to bushwhack probably seven or eight times on this particular section to get around some massive downed timber and big snags, and some of the bushwhacking was pretty sketchy in its own right on steep hillsides with dense undergrowth. Keep in mind that on my first trip earlier in the summer, this same trail was beautifully maintained and a breeze to travel — it really depends on the nature of the weather. Choose your own adventure. 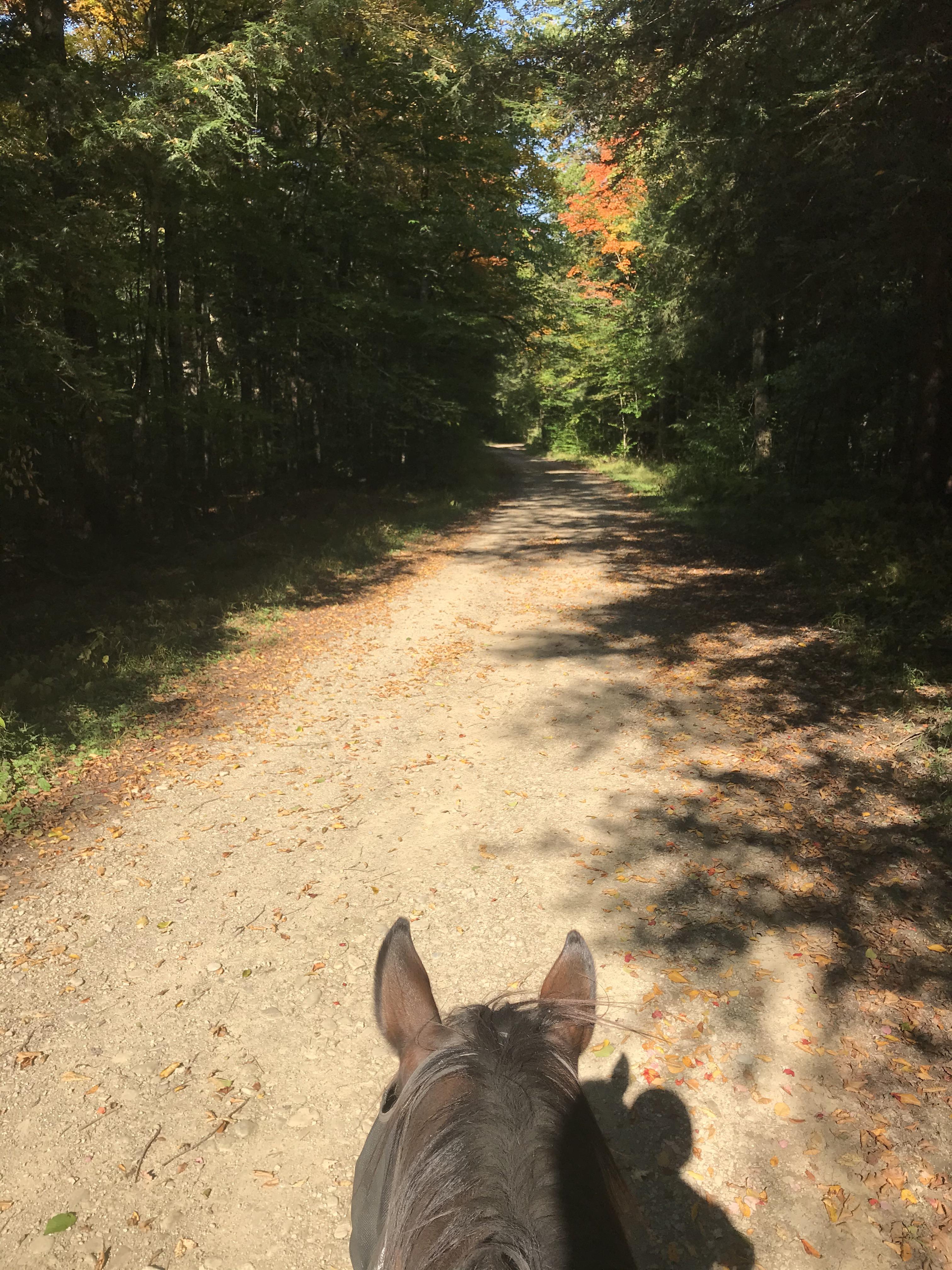 Glimpses of fall color through the trees. Photo by Kristen Kovatch

Different iterations of the trail maps don’t always match, and I think there are newer-developed trails that haven’t been added to the print map yet. We found this out the hard way on my first trip in August, when we found a nicely-developed and well-blazed trail at a junction that as far as the map as concerned did not actually exist. Since we weren’t super confident where this nice-looking new trail went, we opted not to take it. The online PDF map does not match the printed map that the front gate hands out either — newer trails haven’t quite made it to print yet.

The front gate doesn’t seem to be super-aware of trail conditions or closures. Fortunately, actual trail closures are pretty clearly marked when you get to the trail itself, but can also then lead you to need to go miles and miles out of your way to get back to where you wanted to be. Communication between park maintenance and the folks working the front gate would help this situation so that the gate attendant could tell you as you came into the park which trails were closed, long before you find yourself in a bind. 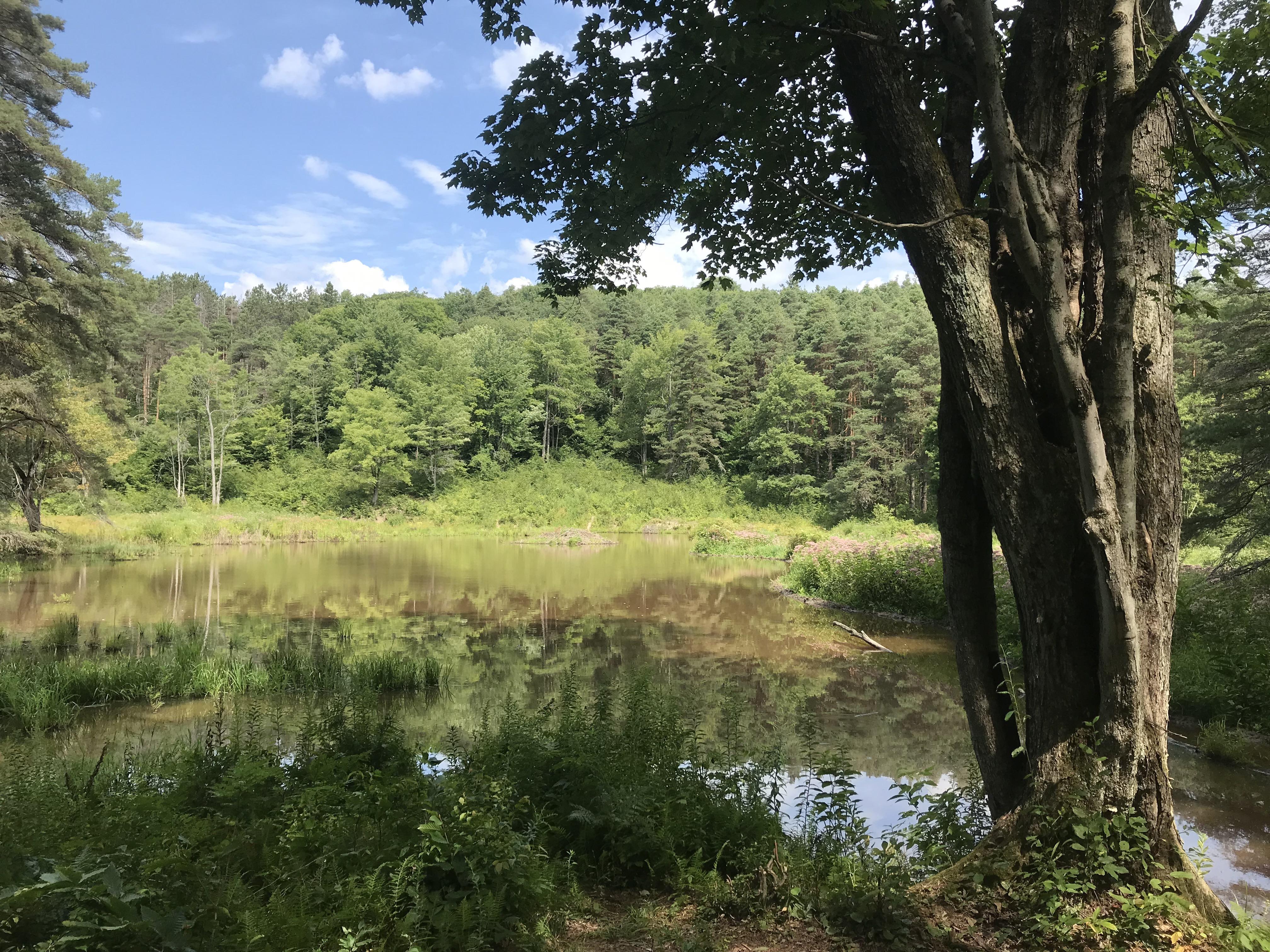 One of the many beaver ponds, where we stopped for a break and some snacks. Photo by Kristen Kovatch

As far as public land goes, my cons are definitely NOT deal-breakers. Allegany State Park remains one of my favorite public parks for trail riding, and with its easy accessibility, I anticipate making many more trips there in the future. Maybe I’ll meet up with some of you along the trail!