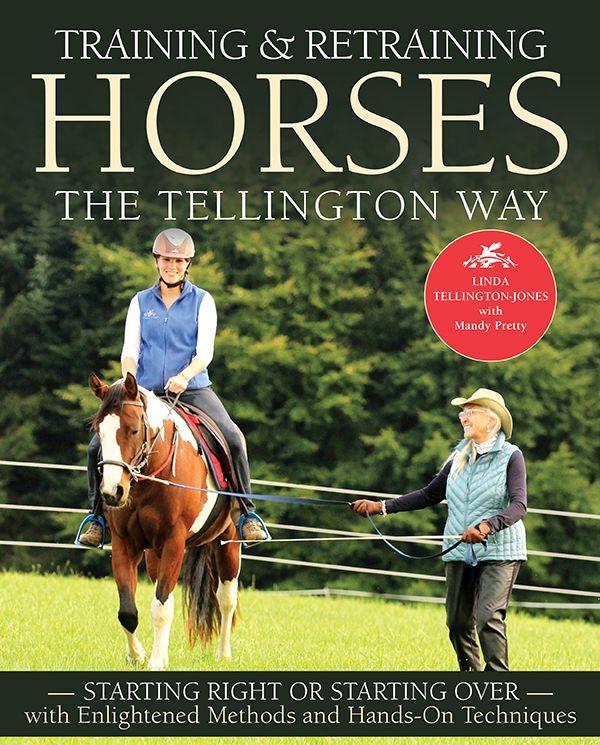 “Training & Retraining Horses the Tellington Way,” by Linda Tellington-Jones, is a comprehensive guide on using Tellington-Jones’s well-known methods to lay a solid foundation for young horses and horses being restarted alike. While I’ve heard of Tellington-Jones and TTouch, I’ve never read her work and wasn’t deeply familiar with her methods, so I was curious to read and learn more.

Tellington-Jones’s core approach is sound and rooted in good horsemanship. There were techniques I wished I’d known a few years ago as I think they’d have helped a horse I used to ride. My two favorite points are:

However, my innate skepticism kicked in often – while Tellington-Jones’s methods and philosophy seem sound, some aspects seemed too good to be true and the various pieces of equipment seemed to repackage or rebrand equipment with which equestrians are already familiar.

Readers find references to equipment such as the “Zephyr lead” throughout the book. What’s a “Zephyr lead?” A special lead rope threaded around the halter similarly to a lead chain, though Tellington-Jones notes a regular non-Zephyr lead will suffice.

Another prominent item is the “Tellington Wand,” a four-foot-long white dressage whip, that, writes Tellington Jones “can work like magic” when used as an extension of the arm. The difference between a “Tellington Wand” and average dressage whip? The “wand” is white and “perfectly balanced and has enough rigidity to give precise signals but not so stiff that it does not easily bend with a little pressure.” It’s called a “wand” because the positive name changes the perception and the term “whip” evidently carries negative imagery of pain and punishment even if one has never used it that way. I understand that word choice matters, but as described, the “wand” sounds pretty similar to any good quality dressage whip.

What really put my skepticism into overdrive, though, was “body wraps.” Tellington-Jones describes them as having an “amazing effect” on horses’ balance, focus, confidence, posture, proprioception and body awareness. They consist of “several four-inch [wide] tensor bandages tied or fastened together with Velcro” and are used in multiple techniques. While I don’t doubt their utility in acclimating horses to being touched all over, I struggle to believe they’re an omnipotent tool instilling confidence and focus, improving horses’ posture and balance while giving them greater body awareness and proprioception. Reading about the properties Tellington-Jones attributes to these four-inch tensor bandages left me thinking, “where’s the science to back this up? Does it really work? Prove it.”

None of this is to say Tellington-Jones’s techniques are ineffective. I’m currently horseless with no consistent access to horses, so can’t test for myself. Her core horsemanship is sound, so my skepticism is more directed towards everything doing everything Tellington-Jones claims.

TTouches are also a bit puzzling; Tellington-Jones describes them as “a form of bodywork” but “not massage,” yet they sound very similar to massage. She explains TTouches seek to work with a horse’s “entire nervous system and fasciae at the cellular level rather than directly influencing the muscles.” I can believe the TTouches are effective, but again Tellington-Jones seems to portray them as being able to solve myriad issues.

TTouches mainly have animal-related names. This is explained on a page 84 sidebar, “each of the different TTouches has a unique animal name. While it may seem like it’s just a cute way to remember all the various techniques there is actually a very specific reason for it. The TTouches themselves are often visualized on a clock, as the tissue is moved in a circle and a quarter from six o’clock around to nine o’clock. This visual activates the logical, left hemisphere of your brain. To access the creative, intuitive, right hemisphere of your brain, animal names are incorporated. This allows whole-brain learning and helps to connect with your intuitive intelligence.”

The concept behind this is great, but I believe I — and probably a number of other readers — would have difficulty remembering what “Tarantula Pulling the Plow,” “Lick of the Cow’s Tongue” or “Python Lifts” are 20+ pages after encountering the term. Say someone takes this to the barn to perform a specific exercise and they’re out there in the ring training a horse and encounter a reference to “Lick of the Cow’s Tongue.” Can they easily drop what they’re doing, flip to whichever page explains “Lick of the Cow’s Tongue,” refresh their memory, flip back to the technique and seamlessly perform it on their horse? I don’t think so — at least not in the present edition — with TTouches explained in various parts of the book.

This wouldn’t entirely solve the problem, but perhaps the TTouch descriptions could’ve been placed in a single glossary so readers aren’t left paging through multiple chapters to double-check what a “Python Lift” is, for example.

Last nitpick – clarity and conciseness are virtues seldom seen in training books. Much could be tightened and, like many training books I’ve read, this one feels slightly unpolished. Also, while there are enough photos, I feel many movements would be better explained via video. Although there are YouTube channels for trainers like Tellington-Jones supplementing their books, perhaps directing readers to them would make some of the concepts more concrete and easy to understand.

Now – all this isn’t to say this is book isn’t worth the read. Far from it. Tellington-Jones is a proficient horsewoman, her techniques work and riders can benefit from implementing some of her methods. I’m skeptical because I’m skeptical of anything making big claims. I question the methods because I’ve always asked “why? How does this work?” etc. However, it is clear that Tellington-Jones knows horses and has excellent horsemanship herself.

You can purchase the book here.