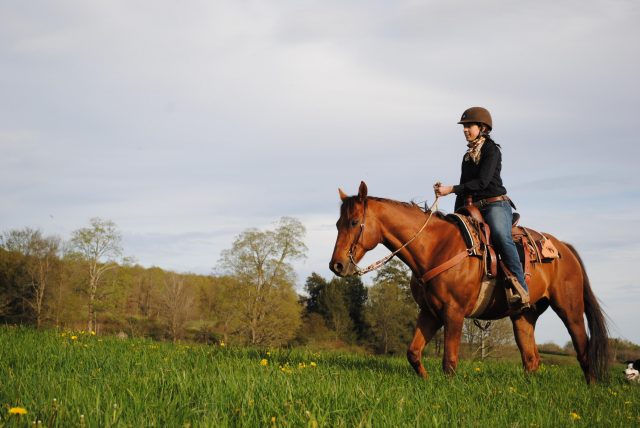 “Physically speaking, Jobber is not the right horse for this job… Try telling him that when he’s got the grit to run nose-to-nose with a reluctant-to-load bull…He doesn’t know he’s not built for this job, because he loves this job.” 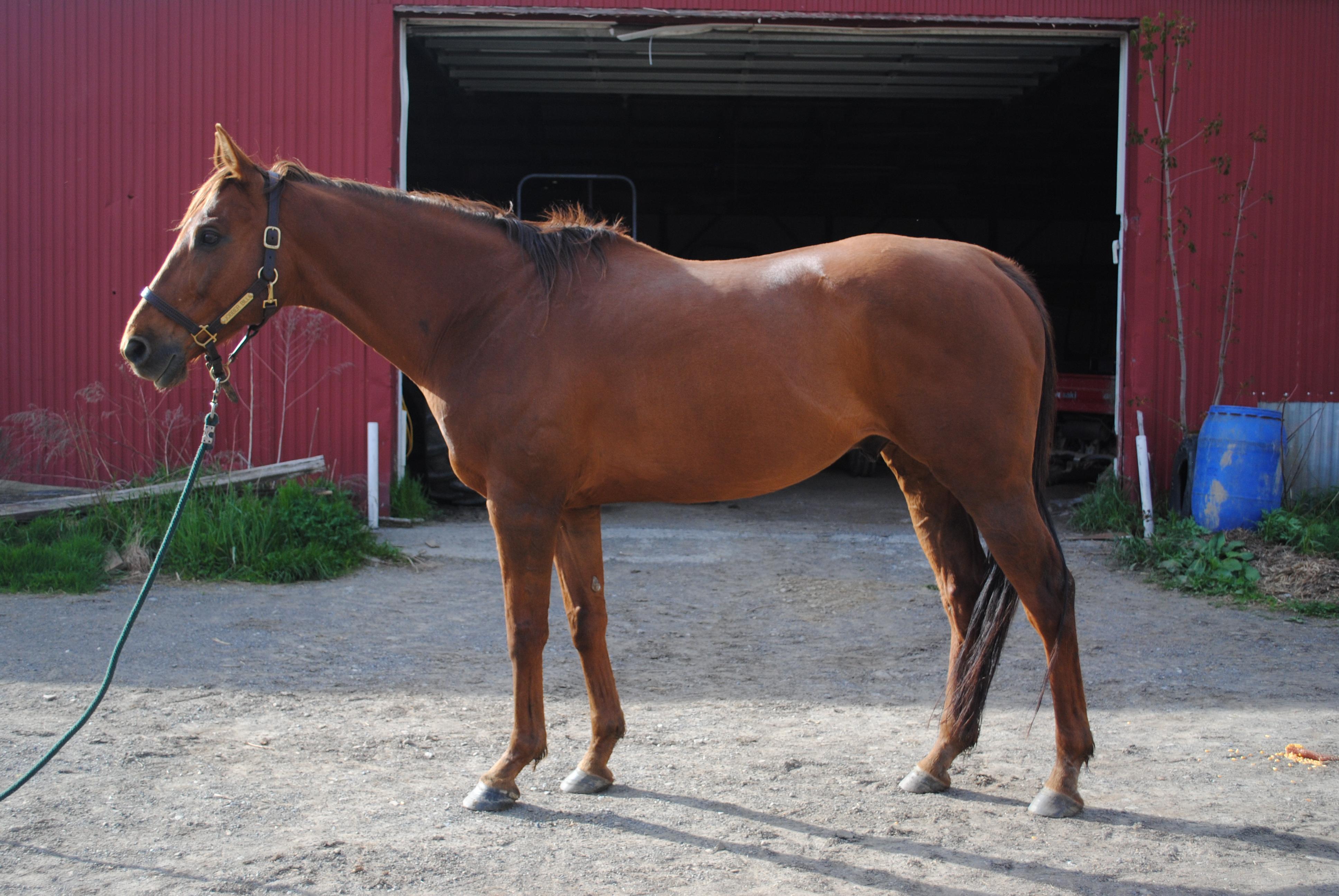 He’s an 11-year-old off-track Thoroughbred gelding. He was bred to be a racehorse, and he indeed raced over a modestly successful paid-his-way career over five seasons at Woodbine and Fort Erie racetracks in Ontario, before retiring at the end of 2016.

He’s now transitioned completely to his new job as a working ranch horse who also dabbles in the reined cow horse show pen from time to time. In a sport that’s completely dominated by the Quarter Horse, we’re lucky to have an incredibly supportive show community here in New York state who have welcomed my “unconventional” animal and love cheering him on — and are quick to both give me truly helpful advice, and point out and commend what’s improving.

I’ll always be one of the first to point out that Thoroughbreds can do anything — but I always include the caveat, “if you find the right Thoroughbred for that job.” (That applies whether you’re trying to find a Thoroughbred that has the cattiness and grit to be a cow pony, or whether you’re looking for your first restart project for the hunter/jumper ring — the right horse for you is out there if you’re patient enough to wait for him.)

Physically speaking, Jobber is not the right horse for this job. If I were hand-picking a Thoroughbred for cow horse events, I would love if he were a little bit wider-set in the front end, if his hocks were a little lower, his tail set lower to really get that hip coming under, and if he were maybe a hand shorter (although I do love having a horse I actually physically fit on). Jobber, at the end of the day, is not built to be a cow pony.

But try telling him that when he’s turning back cattle at the end of our boxing run:

(People tell me all the time their horse loves turning barrels, loves jumping jumps, loves this or that… if I turn Jobber out in the cow pasture, he chooses to go work cattle by himself, in his own free time. When your horse turns barrels by himself instead of grazing, we can talk.)

People have asked me — okay, I know this is the most common blogger trick in the book, but I’ve legitimately had this question sent to me on more than one occasion on Jobber’s Facebook page as well as when I’ve taken over The Western Thoroughbred’s Instagram or Facebook story — what kind of considerations I make for Jobber as a Thoroughbred in the sport of reined cow horse. This is an excellent question, because as much as we love to say “Thoroughbreds can do everything!” the truth remains that it’s not quite as easy as jumping on a Thoroughbred, pointing him at a cow, and putting the heels to him.

Reined cow horse is a discipline that requires extraordinary athletic talent from its horses: they need to get in the ground, be fast on their feet, roll back hard on their hocks and of course be able to read a cow. While I love competing my Thoroughbred in this sport, I will not deny that it would be much easier and I’d definitely be a lot more successful in terms of points and placings if I were riding a horse bred and built for this game. 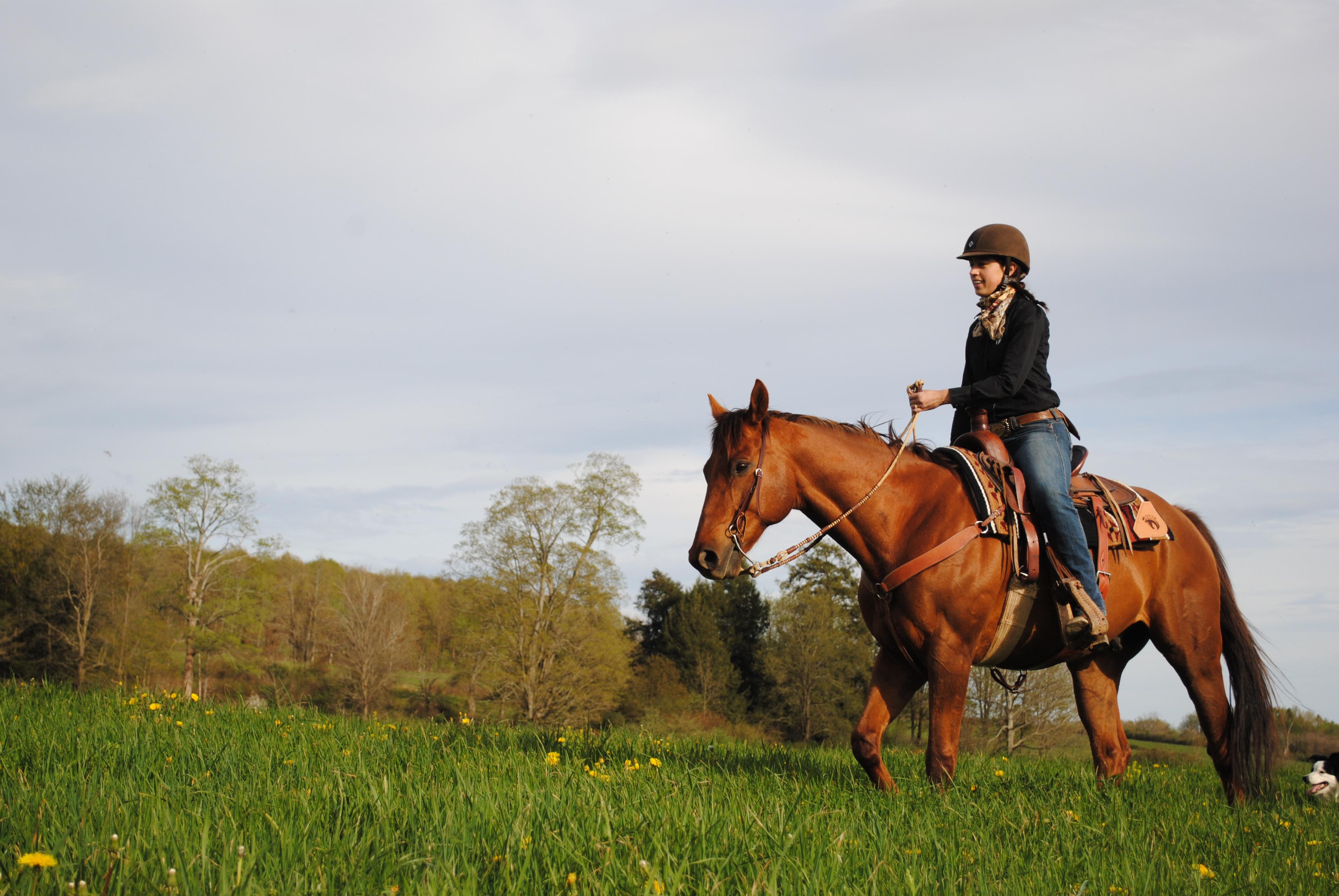 Here’s how we get by:

Frankly, I never go in expecting to win. If you’re a super-competitive person who is also bound and determined to, in my husband’s supportive words, “put a round peg in a square hole,” one or the other of those goals might need to sit by the wayside for awhile.

What I do, however, is go into the show pen with goals in mind for myself and Jobber as a pair, and those goals absolutely never involve the judge, the score, or the placing. They’re goals like “achieve a clean lead change back to front” or “maintain rhythm and stay in the bridle.” I know full well that Jobber is not going to make an open bridle horse. He might never even go down the fence (that #@#$ is scary and I absolutely want to know I have my ducks in a row if I ever try it again).

2. Play to my strengths, and choose my battles.

I chose my classes much more carefully this year. In 2019, when we made our reined cow horse debut, I started out by signing up for every class we were eligible for, and spent a lot of time getting frustrated in the herd work (reined cow horse’s version of cutting). It was simply beyond where we were in our training and physical ability: Jobber’s rollback, and specifically his exit out of the rollback, was just not developed enough to be able to hold a fresh steer from the herd.

So this year, I skipped it—and discovered that not only did I start the day out WITHOUT a big dose of frustration, but my horse felt better and fitter without me trying to jam him through a class that he wasn’t ready for. Maybe someday we will get back to it, but I’m not going to fret about making him do a class that’s not yet in his wheelhouse just because I want to prove some point that my OTTB can do whatever your stock horse can.

If you have a horse that doesn’t find it physically easy to do the things you want, it’s absolutely critical that you take the time it takes to get that horse conditioned properly for the task at hand. In video above, you’ll see the most wee little stop of all time. It’s taken us THREE YEARS of slow, careful training to develop that stop—Jobber is not built like a little reiner, so it was important to me that I build up the training and muscles carefully over time as to not injure him by jamming him into the ground to try to force a stop. It’s taken me an equal amount of time to get him into the bridle.

If you have a hard time imagining a three-year process to bring your horse along to a place where he’s marginally competitive, you may wish to rethink this whole concept.

Remember what I said before about Jobber working cows in his free time? This horse truly loves his job, and I’m careful to make sure that I don’t burn him out in the show ring to make him reluctant to work out in the field at home. If he starts to tell me that he can’t do this or doesn’t like it any more, I will stop and find another job to which he is well suited. Life with these horses is too short to force them to do what they can’t handle! 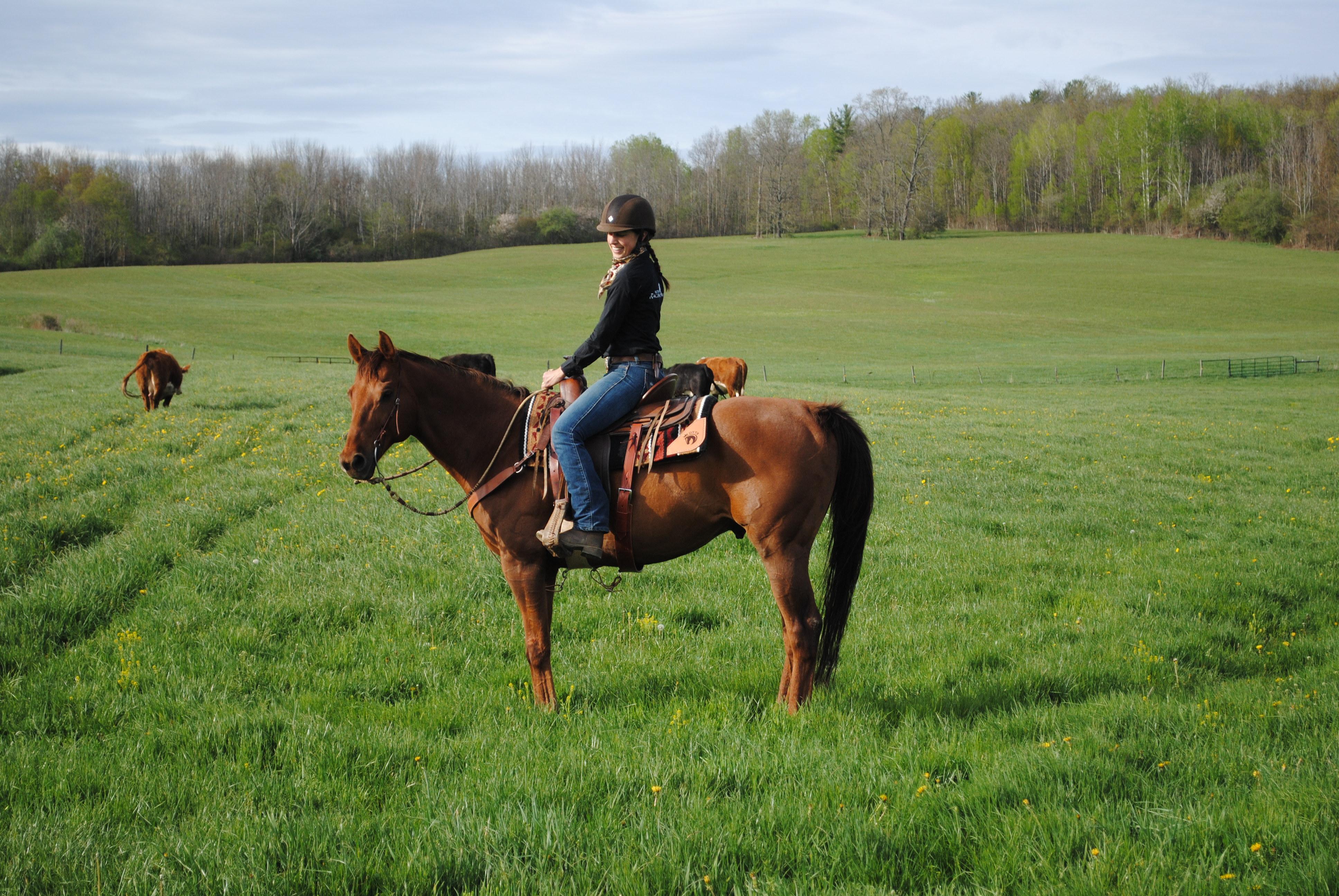 I count myself as a moderate success at showing a Thoroughbred in reined cow horse — mostly because to date, I’m pretty much the only one I know of. But we’ve shown improvement season to season, we’ve done our homework, we’ve done our conditioning, and we’re well aware that we have a long way to go and are willing to put in the time and the slow effort to get there. I’m also mindful of something my internet friend Stacey Chepren points out in her excellent article “Why It’s Dangerous To Be the Jumping Percheron:”

In closing, am I saying “everyone look at me, I have the only athletic Percheron on the planet, and the rest of you are out of luck”? No, absolutely not. I am sure there are others out there. I am just trying to put a little education, perspective, and encouragement of a little extra thought out there and avoid having Percherons be put in situations they don’t belong.

We love celebrating what we love seeing as “underdog horses” in equestrian sports — and often (though certainly not always) those so-called underdogs seem to have some physical characteristic that set them apart from the run of the mill horse you’ll find in a given discipline. Perhaps it’s the flamboyantly-colored warmblood in the highly-traditional dressage ring, or the legitimate pony that’s running Advanced eventing. Perhaps it’s the Clydesdale that field hunts, or the spotted cob that barrel races.

We love these “odd ducks” in the horse world. For some of us, we love to write those stories ourselves. But every one of those underdogs you see successfully changing stereotypes and preconceived notions about what horses can do what jobs is the result of a lot of hard work and hard realities. If you’re out there on one of those so-called “round pegs in a square hole,” take your time, do right by your horse, and enjoy the ride.