Starting the game, you’re prompted to name your stable and your first horse. You start with 40K coins (in-game currency), leaving you enough to buy another horse for 20K coins – the first horse is free, second horse, 20K, third, 40K, fourth 100K and fifth is 200K. After you’ve completed 10 races you can buy horses at auctions or in claiming races.

Considering this is a free mobile game, it’s solid – the graphics could be better but they’re not bad. I figured when I downloaded it, I’d play for a few days and lose interest. Nope. I’m at least two weeks in and not bored yet.

This is a bit different from the horse games us horse-crazy millennials grew up playing on PC or Playstation (I can’t be the only 20-something with fond memories of the Mary-Kate and Ashley horse Playstation game or the Rosemont Hill/Stable games for the PC circa the early ‘00s). This isn’t “hands-on,” you’re not riding horses, grooming or doing virtual barn chores. You’re the owner, you enter your horses in races, retire them, breed them or stand them at stud. While it sounds simple, there’s some strategy involved as you discover what distances suit your horse best, which jockey(s) to pair them with, etc. 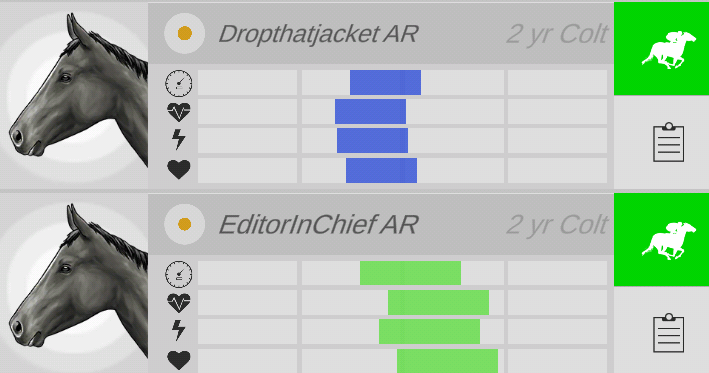 1. No real tutorial (there’s a tutorial but it’s more like an FAQs section), leaving players to figure things out for themselves: Sometimes “figuring it out for yourself” means you make a costly mistake. For example, there’s no explanation in-game of what the “R” with the no symbol means in auctions – turns out it means the horse isn’t registered and thus can’t race – in my case this proved a costly mistake that led to me deleting the game and starting over from scratch with a new stable. It costs 200K coins to register a horse, if you buy an unregistered horse and don’t have 200K coins, then you’re kind of stuck until you get the coins or can sell the horse for (hopefully) what you paid. There’s no explanation of how long a season is (roughly a month, one day in real life is two weeks in-game) or how long it takes a horse to get a full energy meter after a race (roughly a day and a half to two days, real life time).

2. Cost: Much like real life, virtual racehorse ownership isn’t cheap. Registering horses is 200K coins as mentioned above. “Enabling stakes” to enter your horse in stakes races is 100K coins. Changing their location is 50K coins, location is randomly generated with the horse out of four areas: Dubai, Hong Kong, Canada and the United States. Standing a stallion at “public stud” (meaning others can breed to him, bringing you income) is one million coins. Breeding a mare, period, involves a 20K “breeding fee” plus a stud fee on top of that if you breed to a public stud, and you might not make a profit selling the foal. Most of the better horses in auctions or claimers go for a higher price and are out of reach of a new stable. There is, of course, the option to purchase in-game currency using actual money, and while I don’t ordinarily do this, I did cave the other day and picked up the “stable starter” bundle for $7.49, figuring since I’m writing a review I might as well test every aspect I can. The game does offer different bundles at different price points, and unlike a lot of mobile games, you aren’t really forced into spending money to progress.

3. Everything Left to Luck: Again, like real life, everything comes down to luck and is a mixed bag. The horses have five traits: speed, stamina, gate speed (how quickly they break from the gate) and heart, in varying degrees (they do seem to be heritable once you’re breeding horses, but they’re randomly generated in the first horses you buy like everything else about those horses). If you’re lucky, you’ll get a middle-of-the-pack to good horse for your first horse or two. It’d be nice if, instead of just getting a random horse, you could pick from 4-5 horses based on traits, color and location (color because right now I have a stable full of gray, bay and black horses with one chestnut). Also, while you can see traits for horses at auction or stud, you can only see those if they’re unraced – horses that have raced only have their race record visible. I’d like to see both traits and race records on all horses so I’m not blindly breeding to/buying based on race record while hoping they’re at least equal to whatever is currently in my stable.

Screenshot by Noelle Maxwell. Horses up for auction or entered in claiming races. The yellow “S ” icon means they’re stakes eligible. The flag represents where they’re based, and if you click on the horse’s name you can see pedigree, etc.

In all, this is a fun, addictive, not-too-time-consuming game – horses race at scheduled times and you can watch races live or after the fact. Once horses are entered in races, there’s not much to do beyond browse the sales. While this could be a kid-friendly game as there’s no real gambling, some of the horses that go through the sales have some not-so-kid-friendly names. It’s challenging but not impossible to succeed if you play wisely – my best tip for new players is to buy fillies for your first two or three horses via random generator – you get a discount on those three and fillies and mares typically go for high prices at auction and are slightly out-of-reach for new players. You can use those first fillies as the foundation for a broodmare band.

Happy playing – and if anyone wants to check out my stable or give it a follow, my handle is Alagnak Racing!