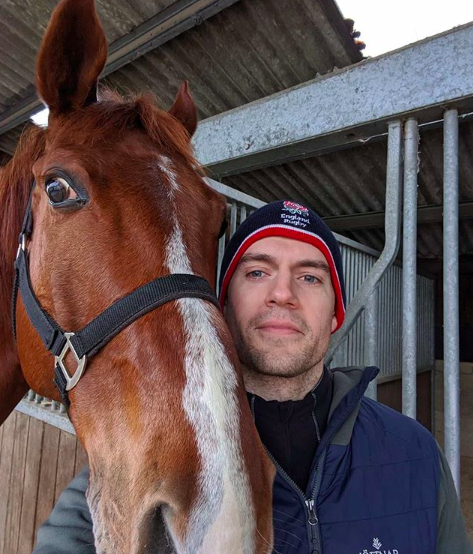 Yes, he’s also a gorgeous actor, but that’s not the point.

One of my few talents in life is binging TV shows several months-to-years after the rest of the world has caught on to a series being a “thing.” (Don’t ask me why I let the latest season of Great British Bake-Off sit there in Netflix for no reason until it had well and wrapped.)

So yes, I’m just now watching The Witcher, a few episodes in with my husband. I’ve gotten far enough to get the “toss a coin to your witcher” song abysmally stuck in my head for days (and now you will too, you’re welcome). I have to admit that I’m still not totally sold on this series; it reminds me strongly of the needlessly intricate fantasy books I tried writing at the age of 13 full of Orders of Whosiwhatsits and magical towers and People of Made-Up-Placenames with cool swords.

And, of course, with heroes who had great relationships with their horses. Spoiler: the best part of The Witcher is Geralt of Rivia’s relationship with his horse Roach.

No matter what else is going on in Geralt’s frankly [email protected]#$* daily life, slaying monsters and meeting a parade of mysteriously hot women, he spends a remarkable amount of time thinking about his horse, making sure his horse is taken care of and talking to his horse. Honestly, Geralt is basically a giant man version of a horse girl at heart, only with a sword.

As it turns out, Geralt might not be so different from Henry Cavill, the very good-looking man who plays the titular character in The Witcher. Horse Nation’s careful Insta-stalking research indicates that Cavill spent a lot of time learning to ride in preparation for filming the first season of the show. Actually, let’s make that present tense — he spends a lot of time honing his skills in the saddle, going above and beyond to make sure Geralt looks like a quasi-immortal white dude (no, literally, his hair is bleach white) who has spent a billion years in the saddle.

Here, enough from me. Let’s let Cavill convince you.

Perfect day out with Laszlo, Hector (my horse) and Pablo (Laszlo's horse) today. A great way to say goodbye to Hungary. #Friesian #Hungary

Sure, he might be mounted on the stereotypical movie Friesian (named Hector), looking like every lady’s dream come true, but he’s, like, out there doing it.

The part that blows my mind is that this isn’t even the horse that he rides in The Witcher. That honor is reserved for this delightful chestnut giving us some serious side-eye (I relate to this horse on a cellular level).

Look who I found! And for those asking. This is Zeus pronounced Zey-oos, but most may know this particular horse as Roach! And yes, Roach is traditionally a mare (lady horse) and if the name is anything to go by, Zeus, is not….but that shouldn't limit his performance options. Why don't we have an Oscar for best supporting horse? #HorseOscar #Zeus #Roach #Witcher2

This guy just rides Hector because Hector is his favorite horse… not because he has to. And why is he riding multiple horses just for the hell of it?

The mighty, the glorious, the powerful, and the kind, like a king of ancient myth….this is Hector. Hope you guys actually like horse content….because chances are, now that Zeus and Hector are here, you will be getting a lot 😜 For me my riding training is all about riding different horses. Over the years Geralt has had many horses named Roach and each one has been different, just like real horses. Every horse has a different personality and way of interacting, way of moving, and feel to ride too. So training on different horses builds up that knowledge that Geralt would naturally have built up over the years. As far as becoming a "horseman" is concerned, I have many many years to go, but I am loving every step of the way. #Hector #Horses #Witcher2

“Every horse has a different personality and way of interacting, way of moving, and feel to ride too. So training on different horses builds up that knowledge that Geralt would naturally have built up over the years. As far as becoming a ‘horseman’ is concerned, I have many many years to go, but I am loving every step of the way.”

Henry Cavill, we at Horse Nation salute you, and wish you all the best on this journey of horsemanship. No, you’ll never know it all. Neither do we. But we’re happy to count you among our people.

Also, you’re super hot. Please come hang out with us.