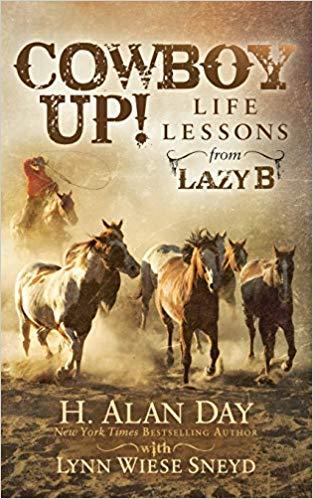 January 7, 2020Noelle MaxwellNoelle Maxwell#BOOK REVIEWComments Off on Book Review: “Cowboy Up! Life Lessons from Lazy B” by H. Alan Day

“Cowboy Up!” provides a glimpse of ranch life with a healthy dose of humor and life lessons.

“Cowboy Up! Life Lessons from Lazy B” by H. Alan Day – brother to retired Supreme Court Justice Sandra Day O’Connor — will be familiar territory to those who’ve read O’Connor’s book “Lazy B: Growing Up on a Cattle Ranch in the American Southwest.” For those who have read Sandra Day O’Connor’s book, there will be a fair amount of overlap between the stories in both. Like O’Connor’s book, “Cowboy Up!” also reads like a cross between a novel and a short story collection – while it has chapters, they’re essentially standalone stories.

This is a fast-paced read (I easily knocked out 20+ pages in a single sitting) is enjoyable and strikes the right balance between lighthearted, fun stories and some grittier tales that show ranch life isn’t always glamorous. It’s about what one would expect from a book written by a rancher – stories about his children’s first pony (a Shetland) with the typical pony attitude and antics to match, stories about ranch life and the cowboys, horses and cattle, but also stories like the time Kevin Costner visited Day’s South Dakota ranch (then a mustang sanctuary) as a possible filming location for Dances With Wolves.

There’s nearly always a moral to each story, whether it’s a light and humorous story or a hair-raising one that leaves the reader thinking, “alright, how’d you get out of that one alive?” It does lack polish in places, with a few minor typos and errors like repeated words in a sentence, but it’s mostly a solid, cohesive book written in a conversational style.

My favorite part was the chapter titled “Beef Jerky,” which sees Day sending a package of his family-famous homemade beef jerky to the Supreme Court justices who served alongside his sister. Included with the beef jerky was a note Day wrote where he joked that cowboys believe eating jerky makes them smarter and he hoped it had the same effect on the Court. Day received a thank you note signed by all seven justices. This chapter exemplifies, to me, the best part of the book: it humanizes people that maybe we don’t always see as human, in this case, Supreme Court justices, in other parts, ranchers and ranching, both of whom can sometimes get a bad rap.

If you’re looking for a fun glimpse of ranch life, this is the book for you. It’s polished, focused and cohesive, making it an overall enjoyable read.