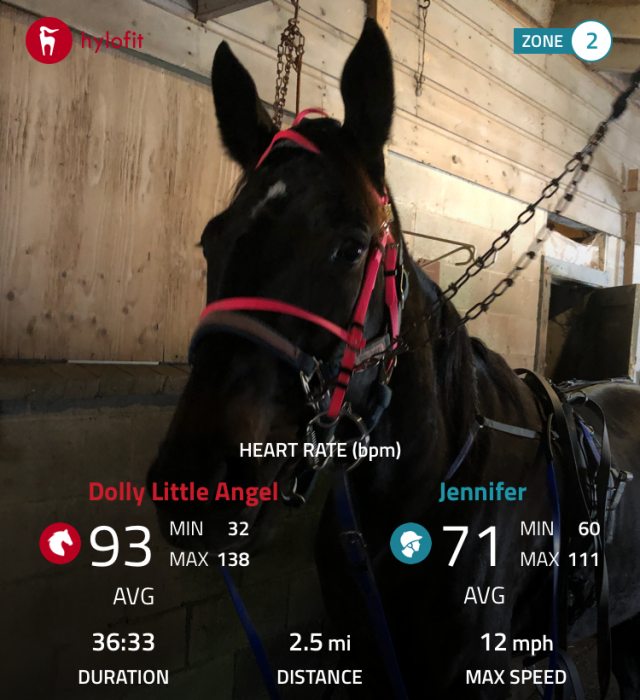 “Ultimately, I was able to push Cole for more speed … as the season went on …” 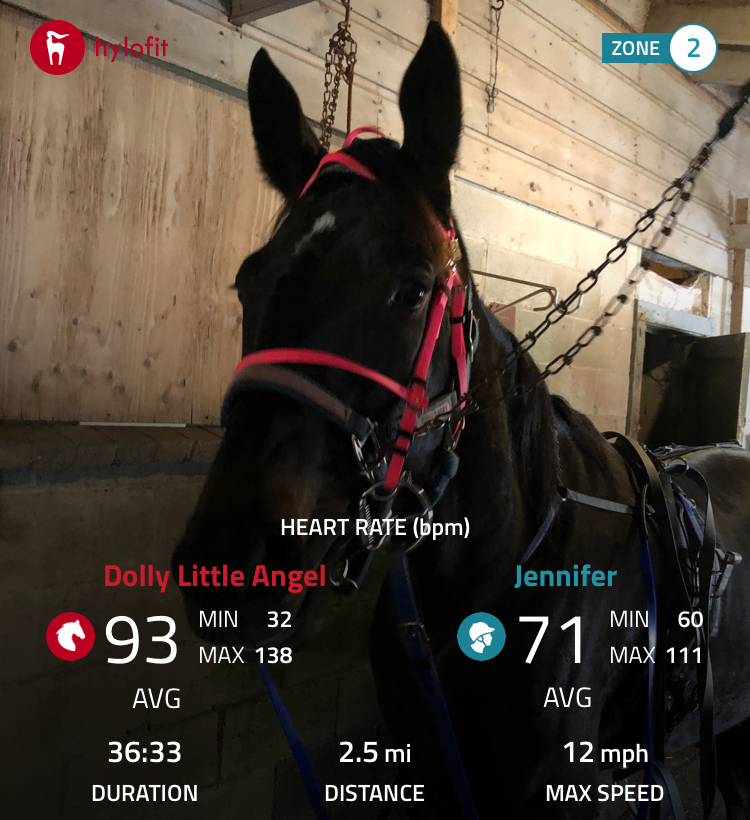 Hylofit on a Standardbred racehorse for training – cool data!

It’s no secret that I’m a technology junkie. From my “day job” in digital marketing to completely wifi-ing my barn to make winter up north a breeze, you could say that I’m pretty well connected. So when I had the opportunity late this summer to meet with the brilliant minds behind the new Hylofit technology to learn how it works and see for myself firsthand, I jumped at the opportunity.

In case you haven’t seen it already, there’s some great videos online of multiple upper level riders and eventers gallivanting out cross country with all of the corresponding data that helps them condition their horses to prep for the big events. They can use the data for heart rate — both theirs and their horse’s — to better understand and customize their conditioning plans for each horse as well as themselves. The more fit they are, the better they can ride, and the more fit their horses are, the better they can perform the tasks at hand.

While it may be easy to see the benefits for upper level riders, especially in disciplines such as endurance and eventing, I was curious to learn how it could help someone such as myself — essentially a “weekend warrior.” I do try to ride several days a week, but with more horses than I care to admit to, a busy work schedule that often includes business travel and no actual ring on my property (we hack on trails, in the fields and jump track and through the woods), I had some questions that I hoped data could answer.

My main focus is hunter pacing, fox hunts and trail riding, and this past year the big focus was on winning back the hunt cups from my regional hunt, Windy Hollow Hunt. My teammate and I won the hunt cups last in 20011, and my main mount at that time, an OTTB, had since been retired. My newer mount had a few years building confidence and coming up the ranks, and was now a relatively seasoned hunter pace horse and field hunter. Last season ended in a slip-and-fall that had him landing on me with the result of a shattered ankle, so this season was 100% GAME ON!

The challenge here is that my current hunt horse, Cole, is an 11-year-old Dutch WB who tends to be on the lazy side — quite the difference from my prior mount, Sky the ever-galloping OTTB. So, to make time and stay competitive, I really had to push him. However, with his rough start to life (his breeder died of cancer and he was untrained and intact at the age of seven when I first acquired him), the issue was understanding just how much he could actually do and stay sound without the risk of pushing too hard and doing permanent damage.

Even more challenging was the fact that he spent much of his earlier time in a round pen and his proprioception was underdeveloped, leading to some balance and training issues that took years to correct and develop. So here we were — heading into the 2019 season with a healthy horse who needed more GO than WHOA and a rider (me) trying to figure out where the gas is on a WB vs my typical TB and just how much go we can manage.

The data tracks heart rate of both myself and my horse. The unit was very easy to hook up and quite responsive. Tip: keep your phone in your left pocket/side so that it is close enough to pick up the bluetooth signal from your horse as well as your own monitor. What I found with Cole was quite interesting.

First, his resting HR was much slower than I was used to with my TB. Next, I also realized that when my HR spiked if I was nervous, he got more cautious and concerned as well. And third, I realized that some things really got his heart racing — and it wasn’t big jumps but rather messy or sloppy/marshy footing where he would lose confidence and get “stuck” to my leg.

This may not seem earth-shattering, but it was able to help me adjust my training and conditioning plan, and also learn how much I could push Cole for fitness and speed without risk of major injury from fatigue due to the fact that based on his recovery rate, he was actually much fitter than I realized (note from Hylofit’s founder: a horse’s resting HR does not decrease with fitness the way a human’s does so you monitor recovery rate rather than change in resting HR).

It also assisted me in determining that when footing got mucky or sticky, to slow down and take deep breaths myself to help calm him through the various conditions until he felt better about the footing.

Another interesting point was that when he wasn’t sure how to navigate a more challenging fence in the field, if the footing was good, he was 100% game for figuring it out with some leg from me. On the other hand, if there was icky footing, even a smaller fence would present an issue for Cole’s confidence (likely due to his past proprioception issues) and his heart rate would go up.

By again taking a deep breath and riding confidently, he was more willing to navigate the situation and if he was really afraid and we were on course, it was better to calmly walk around the obstacle and then revisit a similar situation at home where he could relax and better focus. Pushing him through nerves made him more nervous, where pushing him through what looked like fatigue often was just him being lazy and resulted in better times — and wins and more points towards the two cups!

With a focus on recovery rate after each workout, I could tell that Cole was getting fitter. The last image from Sept 13 was without a full cool out as we had just gone on an easy hack but the Hylofit still helped me understand that I could push him for more speed on a hunter pace. And that’s just the tip of the data iceberg!

Throughout the season, the debate between my teammate (who, by the way, is also a veterinarian) and me was whether Cole was just slow and lazy, not fit enough or had other medical issues such as tying up going on when he exerted too much effort. End result? Ultimately, I was able to push Cole for more speed to make time as the season went on and we rode the fastest we could, understanding his confidence issues in poor sloppy footing.

We ended up winning both hunt cups — the Windy Hollow Hunt Ronald Stearns Perpetual Trophy and the Virginia Martin Hunt Cup for the joint fall series with Quiet Creek. And while this doesn’t guarantee that your horse doesn’t have an underlying medical condition or injury, it absolutely helped me with my training plan and in feeling comfortable in upping the ante and speed as the season went on.

So where’s the Hylofit now? My teammate/vet has it at the track where she is testing it out on her Standardbred race horses. So far, so good — with more interesting data on the way! So if you’re considering a holiday gift for the equestrian that has everything, or that is obsessed with technology, the Hylofit has great features.

It’s also good for bringing horses back from injury, as well as conditioning my trail horses for summer camping trips where we’re not going fast, but we do ride for 10 – 20 miles in the Adirondacks and heat and humidity is a factor, making cardio fitness absolutely important. It’s relatively easy to use, with more information coming out on their YouTube channel and website all the time.

Bonus: there’s a holiday sale going on now for just $299! Ready to learn more about your and your horse’s fitness? Go riding! 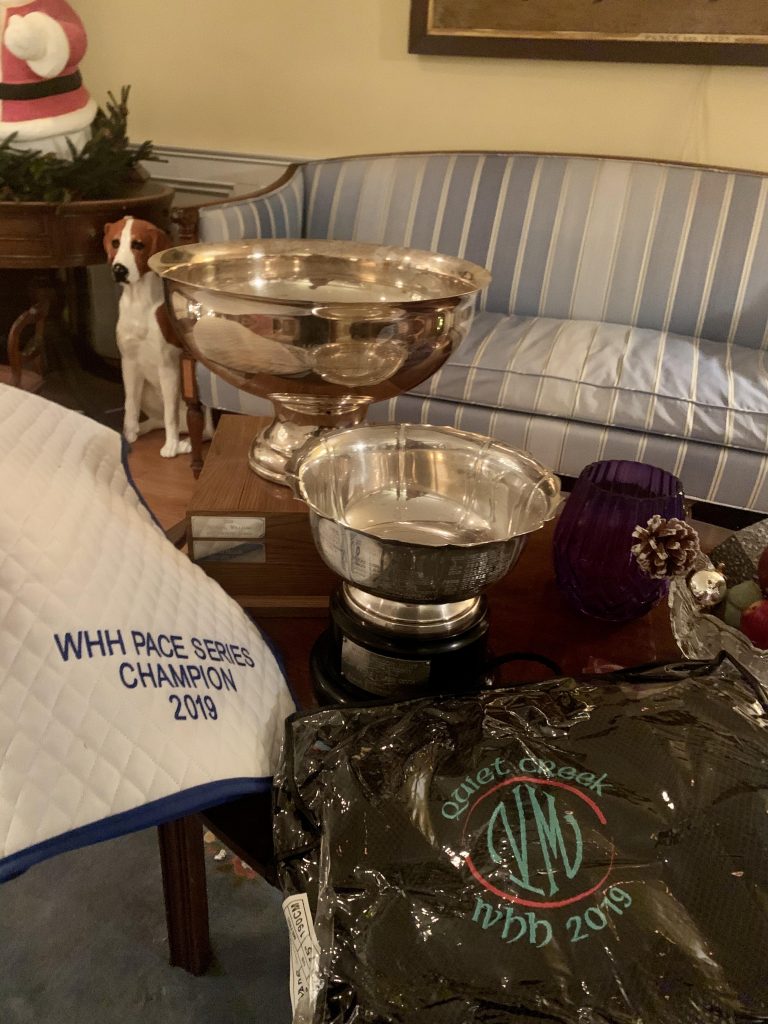 Hylofit helped me win back both hunt cups — for the first time in eight years with a new, totally different horse! Photo from CJ Millar.