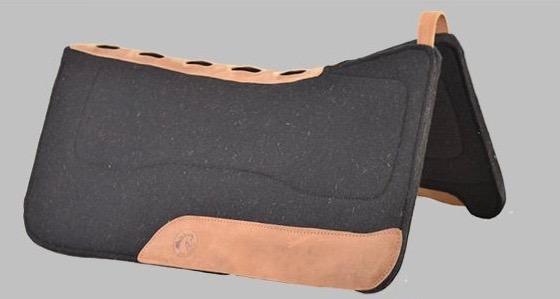 If you’re curious about Total Saddle Fit’s new western saddle pad, this review will let you know everything you need to know. So, here’s a first look at the Western PERFECT Saddle Pad™.

Anyone who knows me knows that I’m a stickler for saddle fit, understanding saddle pad function including to shim or not to shim and making sure that how my girth fits ties into how my saddle fits which ties into how I ride and how my horse moves. And if you’ve followed along, you’ll find that I am pretty big fan of Total Saddle Fit for all of the aforementioned topics and reasons. And, while I love their western cinch (I have two — both felt and fuzz, and my super hard to fit always gets girth sores horse love them both!), I still had fitting issues with my western dude.

Let’s face it — Logan’s fat. And I am not talking like stocky Quarter Horse/draft cross fat. I’m talking just a little larger than pony grade horse no withers beefcake fatty patty fat. But worse is that he’s completely wedge shaped. From his narrow chest and close set forelegs, to his apple bottom QH butt (he is at least part QH!), the saddle tends to slide forward up and down hills and shift back and forth in place.

So while it’s secure, and not an issue as far as stability for rider, it DOES mean that the movement will cause the skin under his armpits to bunch up and get pinched causing some friction rubs. While it’s not a traditional saddle gall from an ill-fitting girth, the end result is the same. A sore horse that is miserable on trails (though somehow he tends to march along and try to make it seem like he’s fine because while fat, the kid does have a work ethic!). 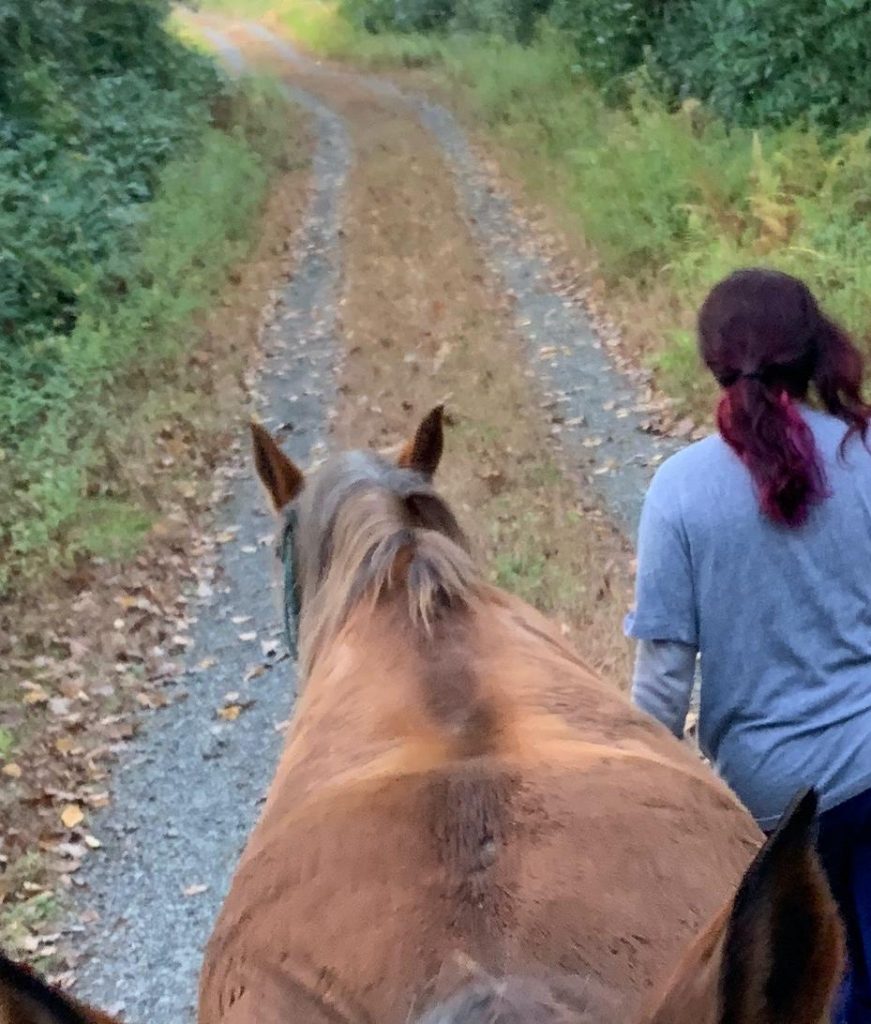 Logan is WIDE in back and narrow up front with hardly any withers to be found…totally wedge shaped! (Nevermind my hair or PJs…someone decided to let himself on a 2mi trail ride at 7am sans rider!) Photo by Morgan Mckinley.

I’ve tried a few different options and brands, most quite pricey and can’t be returned after use which I understand — who want’s someone else’s partly used saddle pad? But that left me with a variety of saddle pads that had extra padding up front to keep the saddle from shifting onto my wedge-shaped horse’s shoulders and none that worked all the time.

I had one with extra padding under the shoulder region that worked well as far as shorter rides, but on long rides it shifted and he got rubs anyway. I tried a similar brand but with a super-core foam that was supposed to be more breathable but the padding was too thick and the saddle slid backwards instead (even with a breastplate).

So when I heard that the brilliant brains at Total Saddle Fit were making a shimmable WESTERN saddle pad, I reached out and begged to be one of their testers and, lucky for me, they obliged!

I’ve got to tell you, the “PERFECT Saddle Pad™ – Western” is the last western saddle pad I will ever own. It fits EVERYONE. It is shimmable in six points much like their English counterparts, but specific to western. And the best part is that it kept my fat Logan’s saddle in place for long trails in mountains, through creeks, up hills and in all sorts of weather conditions — girth galls be gone!

The various pockets allowed me to custom shim — or not at all depending on the horse or situation. The top leather cross section was breathable so that unlike some of the other pads with the shoulder padding, it didn’t weigh down on the horse’s withers and spine and cause rubs. And the overall design and quality made it easily the nicest (though not nearly priciest) western pad in my collection (trust me, I have a few…). 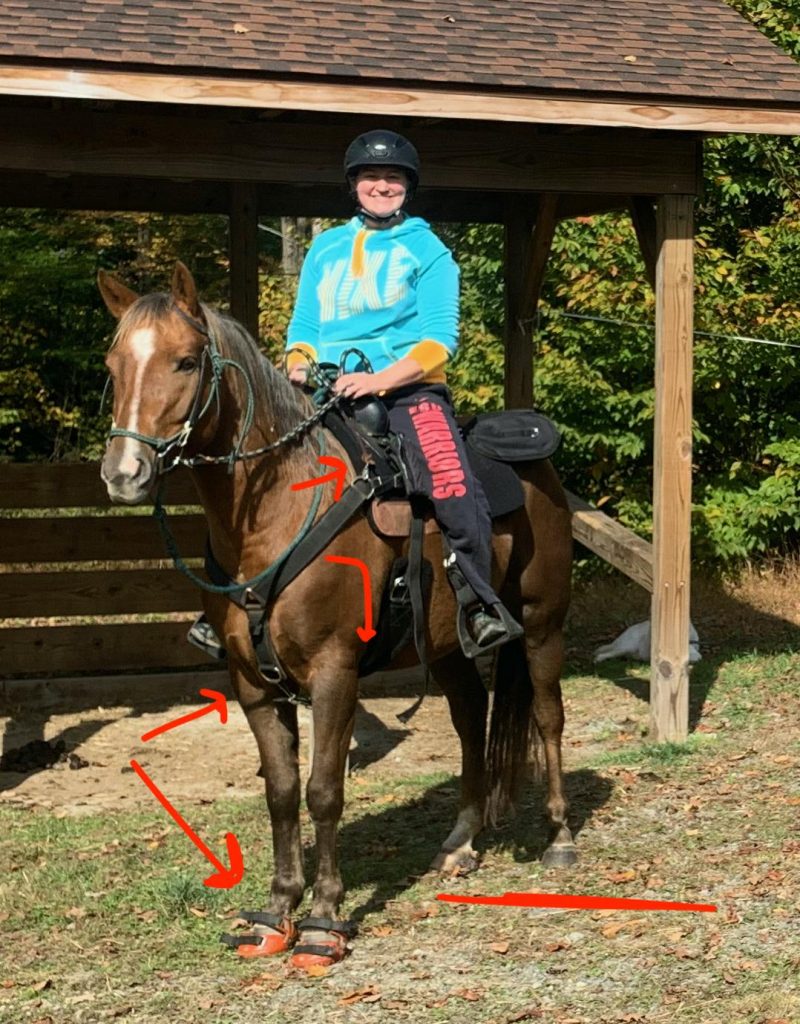 My friend Karen on Logan. Note the narrow front and wide hind, as well as how the Perfect Saddle Pad shimmed only in front helped with the contour around the shoulder while the girth fit around his midsection and elbow perfectly. Wow! Photo by CJ Millar.

I can’t say enough about how this girth and saddle pad completely changed things for Logan and me. What a huge difference! The saddle pad is great on my other horses too, though most of them don’t need to be shimmed. However, if they did, I can easily take out Logan’s shims, and adjust however needed because the six pockets make it super simple.

I was able to double up on the shims up front because that was the only place I needed them, and as Logan started to finally build some shoulder muscle (replacing the fat…at least a little bit…), I was able to reduce to one shim on each side. I don’t think he’ll ever be shim-free, but that’s also why this saddle pad is so important for us.

We spend several trips during the summer up in the Adirondacks, trail riding the mountains and down to the Hudson River, riding 10 – 20 miles a day in the summer heat. It’s a leisurely pace, but it’s also enough up and down through the mountains and terrain that without fail every year he never made it more than one trip because he’d get rubs on the first trip and have to sit out the rest. I can’t wait to have him all season long!

If you’re a western rider looking for solutions, or an English rider in need of saddle pads, girths or their incredible Stability Stirrup Leathers, go check out Total Saddle Fit! As an aside, if you see this article prior to or on Black Friday, it’s the ONLY day of the year Total Saddle Fit does any discounts and everything is  20% off with code BLACK on their site for 24h only. Go riding! 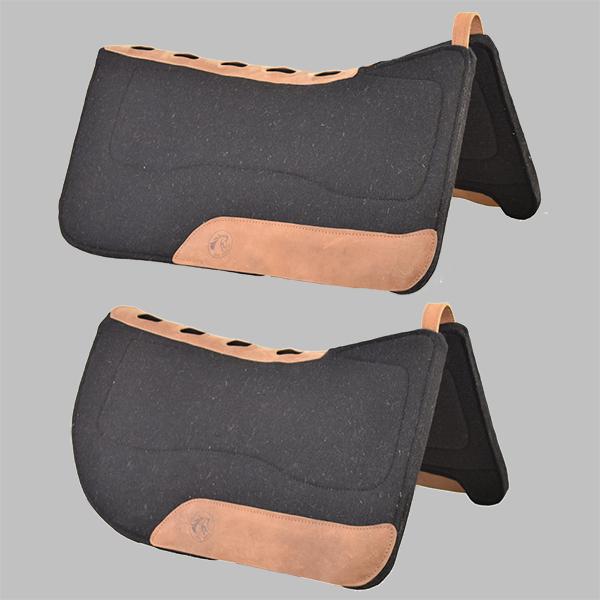