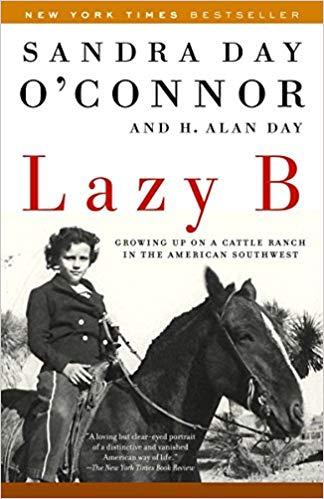 November 13, 2019Noelle MaxwellNoelle Maxwell#BOOK REVIEWComments Off on Book Review: “Lazy B: Growing Up on a Cattle Ranch in the American Southwest”

Sandra Day O’Connor and H. Alan Day recount what life was like growing up on a cattle ranch in the 20th century.

“Lazy B: Growing Up on a Cattle Ranch in the American Southwest,” by retired Supreme Court Associate Justice Sandra Day O’Connor and her brother H. Alan Day, provides an interesting glimpse of ranch life in 20th century America. It’s challenging to know how to review this book because, while the individual stories in it are good, as a whole it isn’t a consistently compelling read.

Going in, I wasn’t certain what to expect – I knew O’Connor was the first woman named to the Supreme Court, but that was about the extent of it. If you’re going into this expecting a rich autobiographical account of O’Connor’s life, you’ll likely be disappointed. If you’re looking for an account of ranch life in the 1930s and ‘40s, this is worth the read.

Initially, I expected an autobiography of sorts about O’Connor, hence my own disappointment upon reading the book. O’Connor, while obviously in the book, figures into it more through the stories told in the book than as a main character. Reading it, I did at times wish it had included more on O’Connor and her life. Don’t get me wrong, this isn’t at all a bad book, but if you want an autobiography that’s clearly not what this is, at least not in the traditional sense.

Instead the book is somewhere between a novel and a compilation of slice-of-life short stories. Each key figure is introduced in his/her own chapter. Once everyone is introduced, the book really starts seeming like a compilation of short stories. It’s challenging to rate this book – it’s interesting, it’s surprisingly fast-paced (at times I’d knock out 30 pages in one sitting without quite realizing it), but there’s the nagging feeling that this book is missing something that would make it a truly good read.

What it’s missing, I can’t pinpoint. In places, the book just feels unfocused and lacking in a specific direction.

Sprinkled in the accounts of ranch life are some colorful characters and amusing anecdotes. In one chapter, the authors discuss seeing one of the first atomic bomb tests in the 1940s. Other anecdotes include a ranch cowboy giving himself a root canal with baling twine (ouch), a classic tale of bureaucratic overkill around ranch regulations, O’Connor’s brother ending up in an impromptu horse race and more.

Alongside the more colorful stories are several life lessons that demonstrate how ranch life shaped O’Connor and her siblings, such as the chapter about the summer O’Connor’s brother spent breaking young horses and learning patience. Personally, my favorite lesson came at the end of the book, where it was pointed out that ranchers and conservationists might have more in common than either realizes.

If you’re looking for a glimpse of ranch life in the mid-20th century, this might be your book, especially if you love life lessons and some slightly colorful tales in the mix.