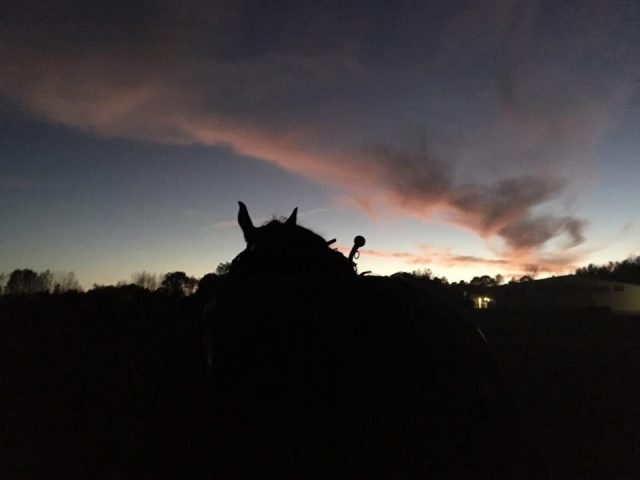 In honor of Halloween Horse Nation held a spooky short story contest. This submission by none other than our own Editor Emeritus is sure to give you chills and bring a tear to your eye. 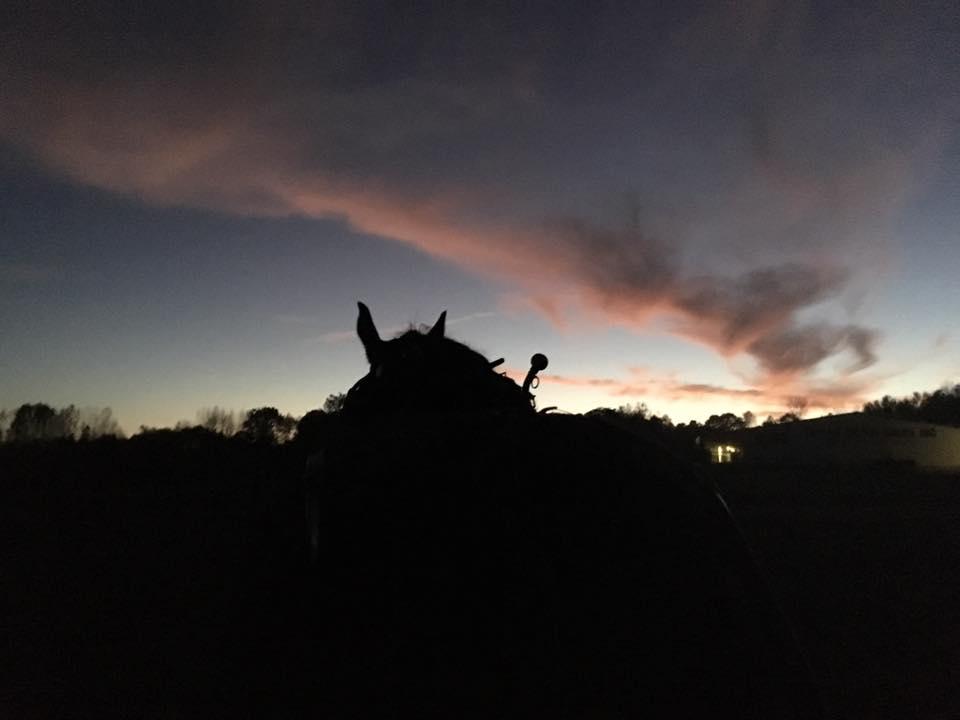 I ran my hand down Dan’s neck, choosing to ignore in that moment how I could feel every contour when he used to be fat and glossy and cresty and strong, the quietly confident half of my beautiful black Percheron draft team who would just keep on marching along while his partner Davey would slacken in the traces, unsure of the footing or the different color of pavement on the road or whatever stupid thing he decided wasn’t cool with him anymore on that day. The last thing that really got him going, I recalled idly, was when they had put up a blinky light to mark where the road was crumbling down the way from the farm.

But Dan, good, brave, Dan, had carried the team as always, trotting courageously by the deadly blinky light on its sawhorse, dragging big, dumb Davey along with him. Davey was a few inches taller, a few inches broader, and better filled his collar than slighter, leaner Dan, but it was Davey that had been taken from me last summer out of the blue — literally, with a bolt from above, from some random pop-up thunderstorm that came from nowhere with so little warning that I hadn’t had time to get to the barn to bring the team in.

No, I told myself. I’m done dwelling on that day. Such a waste of a good horse to go like that, and yet it was somehow a fitting end for the big, brassy, arrogant half of my draft team who would still jig sideways when the road lines changed color or pin his ears if I growled his name for slacking behind while good Dan kept on pulling the load.

Draft horse farming was certainly no longer a means to an end these days, but I liked to think of myself as keeping history alive every time I slid a collar over Davey’s and Dan’s big heads, settling it just so on their shoulders, throwing the hames and harness up over their backs. The music of shod hooves on the road and the jingle of tug chains was like an echo of a bygone era, and while it took a hundred times longer to spread manure on my back hayfield with the horses than it did with the tractor, I kind of liked the romance of it all — as romantic as it could be to intentionally take a hundred times longer on a chore when it seemed the chores were neverending.

But ever since Davey had died earlier this year, Dan just hadn’t been the same. I had toyed with the idea of getting him another partner, but he was getting up there in years, and it just didn’t seem right in my mind’s eye to picture him hooked to anyone else but Davey.

“They go together,” I heard the old farmer’s voice growl as though he were next to me. I pushed that thought away, trying not to think too hard about the day I brought Davey and Dan home, purchased at a knockdown price from the old farmer’s son who wanted nothing to do with the horses.

The old farmer had dementia, the son told me when I called responding to the ad I had seen on Craigslist for a team of “middle-aged Percheron geldings, broke to drive and to most farm equipment, sold as a team.” The old farmer would forget what he was doing and leave the horses tied at the hitching rail fully harnessed, or forget to schedule the farrier for months on end. He forgot the horses were for sale, said the son, and was still booking hay rides into the fall. The old farmer had been in the house, watching me through a window as I signed the bill of sale and shook hands with the son, but pulled on his boots and shuffled outside as I opened up the trailer door, popping up right behind me and scaring me half to death when he growled in my ear, “They go together. Don’t split this team.”

I never had any intentions of splitting the team, I argued in my head with the memory of the old farmer — I had seen his obituary in the paper less than a year after I brought old Davey and Dan home. I didn’t choose to split them up. Take it up with the thunderstorm.

I had to admit to myself, looking at Dan’s wasted body, how the muscles were just melting away despite me hooking him single and trying to get as much work done around the place as I could with just one horse, that perhaps he wasn’t thriving without Davey. Maybe the bond went deeper than I thought. I caught him staring out over the pastures on more than one occasion, ignoring my saddle horse and the pony that were there for his companions, as though he were looking at the spot where Davey had grazed just a few months prior. “He’s not coming back,” I said out loud idly, as though Dan knew enough English and had enough logic to understand this truth. “I miss him too.”

I gave Dan one last pat on the shoulder and turned back towards the barn in the darkening dusk, and stopped in my tracks, my breath coming in one gasp.

Nope, I said as I blinked, looking back into the barn. Just a trick of the light. For a moment, I could have sworn that there in the yellow light of the barn, I saw Davey standing there, fully harnessed and ready to go, a man standing next to him.

Shaking my head at myself as the adrenaline slowly leached from my veins, I hit the lights in the barn with more force than necessary and slid the doors shut harder than I needed to. Quit thinking about the old farmer and Davey. You’re getting in your own head.

“Hup, Dan!” I called cheerily from the driver’s bench of the single cart, ready for Dan to step out like he always did with plenty of expression. Dan shook his head and his feet stayed planted.

“Danny boy,” I crooned. “What’s up today? Let’s go!” I flapped the lines over his rump. Dan took a halfhearted step, then put the hoof back where it had started.

I leaned over from my seat to try to get a look at Dan from the side, and yelled out reflexively at the man standing at Dan’s head, holding him back. An instant later, the yell died in my throat. There was no one there.

Nope, I argued with myself. You’re seeing things. Not sleeping enough. No one was standing there holding Dan’s head. He’s just tired today and doesn’t want to work, and he doesn’t have to.

I gathered the lines into one hand and slid off the cart and began to unbuckle the holdback straps. “You’re done today, Dan.” If his heart wasn’t in it any more, there was no sense in forcing it, but my heart sank as I slid the shafts from the loops and stepped Dan back towards the barn to unharness. If he was losing his desire to work — he was a draft horse, after all, and while it sounded like a human thing to assign to a horse, they loved to work — then he was losing his desire for life.

Night was coming earlier these days, and to compound matters, there was a gale blowing up as I hustled out of the house, later than I intended. The horses were huddled by the barn, waiting to come inside — all except for one. My heart sank as I looked over the little herd and realized Dan was missing.

Rain was starting to spatter my face in the rapidly darkening evening as I strode across the pasture, calling his name as though he would call back. At the low spot in the field, I saw a dark mass lying on the ground, and while I knew already what inevitability I was moving towards, I began to jog, then run.

And then stop right in my tracks. As the wind gusted and a fresh wave of rain spat over me where I stood looking at old Dan, a cloud across the moon shifted, and standing there on the other side of the fence, staring back at me, were Davey and Dan, fully harnessed, and the old farmer at the lines, as plain as day in the moonlight. I let my eyes travel over the curve of Dan’s neck, the way Davey filled his collar, before meeting the farmer’s gaze. He looked me straight in the eye for a long moment before giving me a curt nod and raising his hands on the lines.

The cloud shifted and we were plunged into darkness, and I knew then that Dan was gone — but he wasn’t gone away. He had just gone home, home to Davey and the farmer who knew them best.

We are but temporary guardians of the souls entrusted to our care, after all.