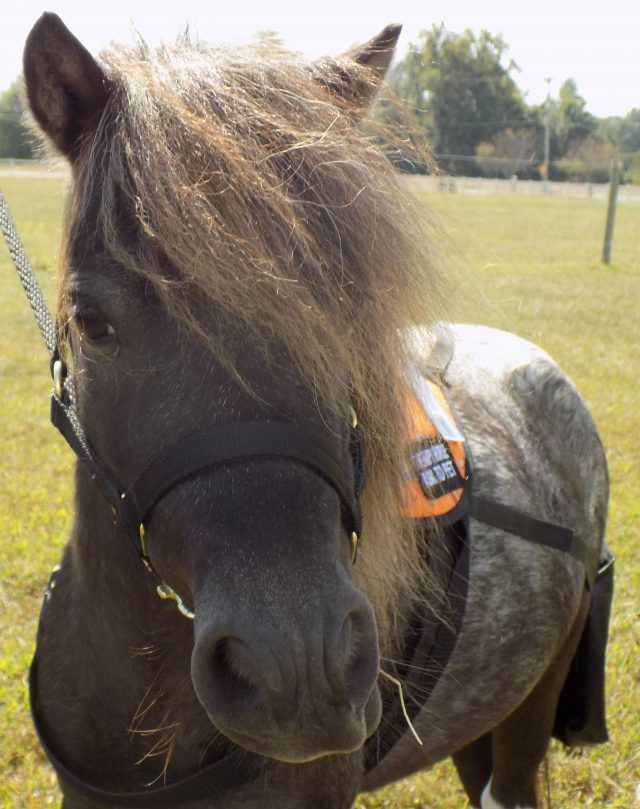 Little King Ranch’s therapy mini, Flash, is “all about the smiles.” 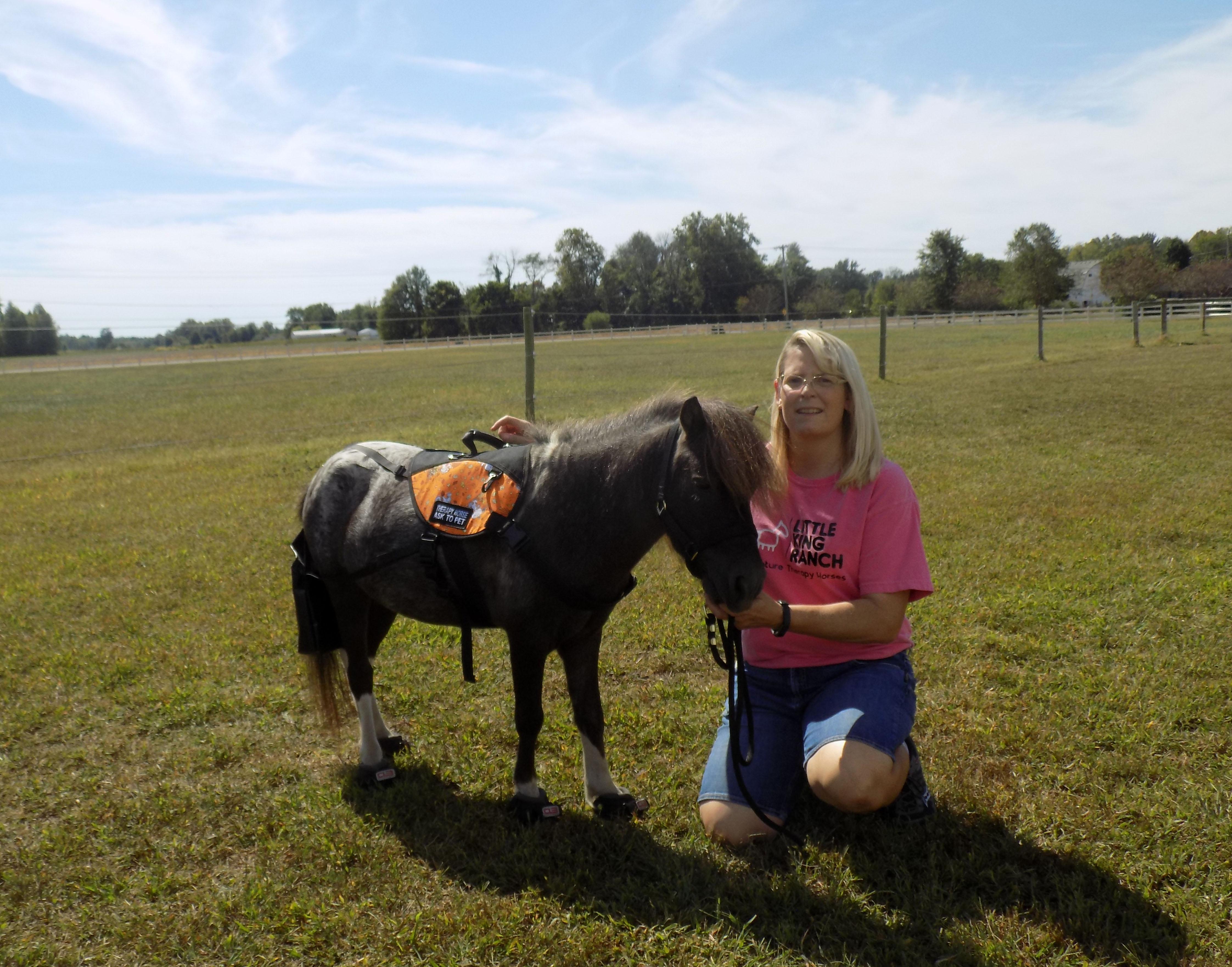 “If I can take Flash on an outing and make one person smile, then we have done our job,” said Kristye King Lewis, owner of Little King Ranch Miniature Therapy Horses in Seymour, IN. “We do not charge for any of our visits,” Lewis continued, “a smile is payment enough. That’s what it’s all about – the smiles.”

Flash, currently the only miniature horse Lewis takes on outings to nursing homes and special needs events, was registered as a therapy horse with the National Service Animal Registry and American Miniature Therapy Horses in 2017. Lewis does have a couple equines in training who she said have potential as therapy horses.

“Mason,” she said of her miniature donkey, “could be a possibility, he just turned two,” and Kingsley, she said “is younger [than Flash], maybe he can get there.” But currently, Flash is the only one used for outings. 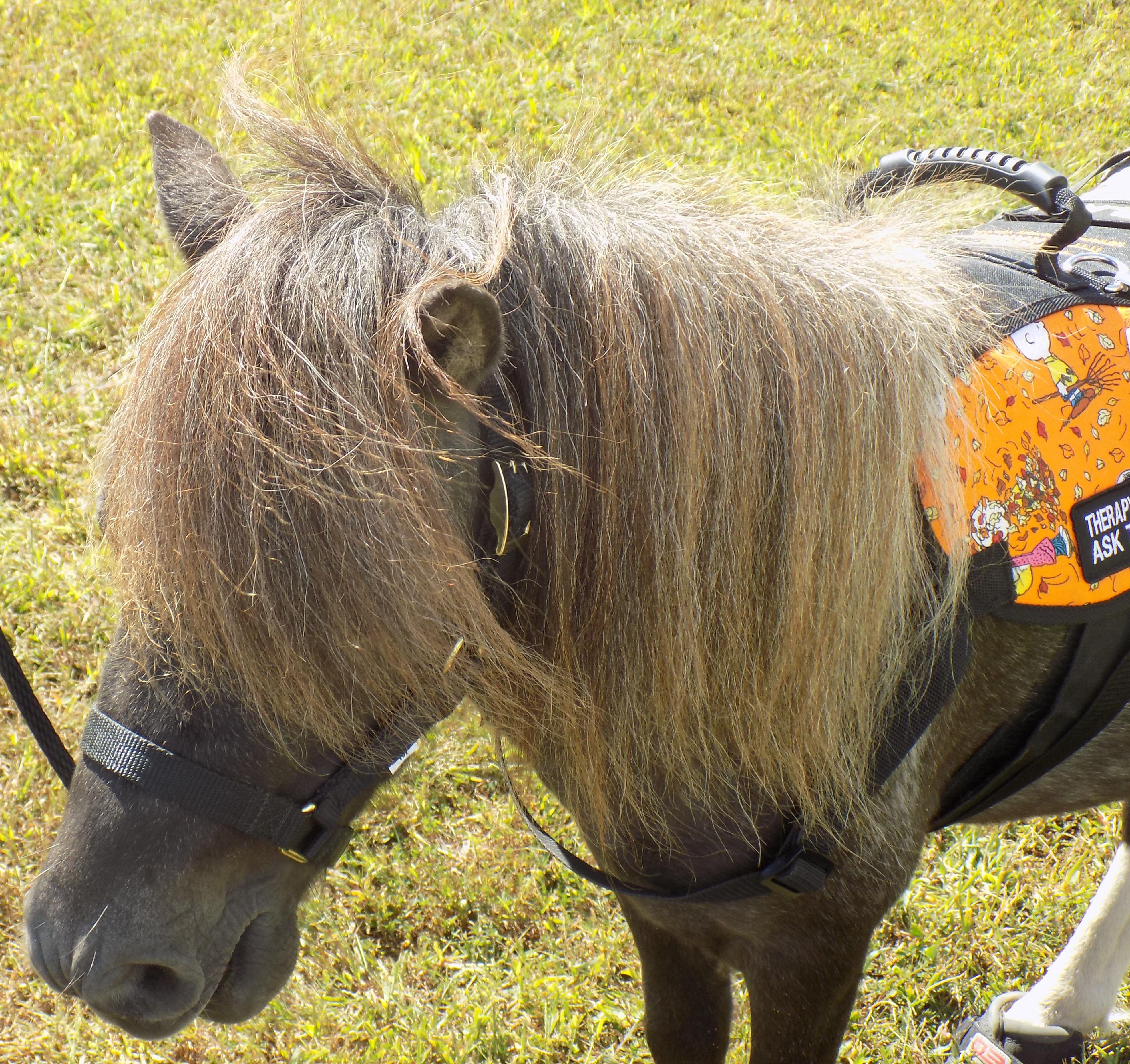 Lewis became interested in working with therapy horses because of her daughter. “After observing Flash with our daughter Kirstyn, who has autism, we realized that there was something special with him,” said Lewis, continuing, “It was as if he had a special connection. I had been following a couple of therapy minis on Facebook,” particularly “Little Horses, Big Smiles” and “Charlie the Therapy Mini,” “and realized that Flash would be a good candidate to be a therapy mini.”

“You’ve got to have the right horse,” emphasized Lewis. “Kingsley [one of Lewis’s other minis] loves people… but different things, he will spook at. Nothing spooks Flash — nothing — so Flash is the perfect horse for this.”

Lewis started out training Flash, desensitizing him to various things, then got him a therapy vest, set of CLB Cavallo shoes, a potty bag and liability insurance, before working on getting him registered as a therapy mini. “Figuring out what all you needed to do [to train and register Flash] was kind of a puzzle,” said Lewis, adding that she’d done extensive research.

One resource Lewis discovered after getting Flash registered was the Lisa Moad methodology, which she now recommends to anyone getting into therapy horses, saying, “I wish she’d [Moad] been out when I first started, because it would’ve been a big help!” 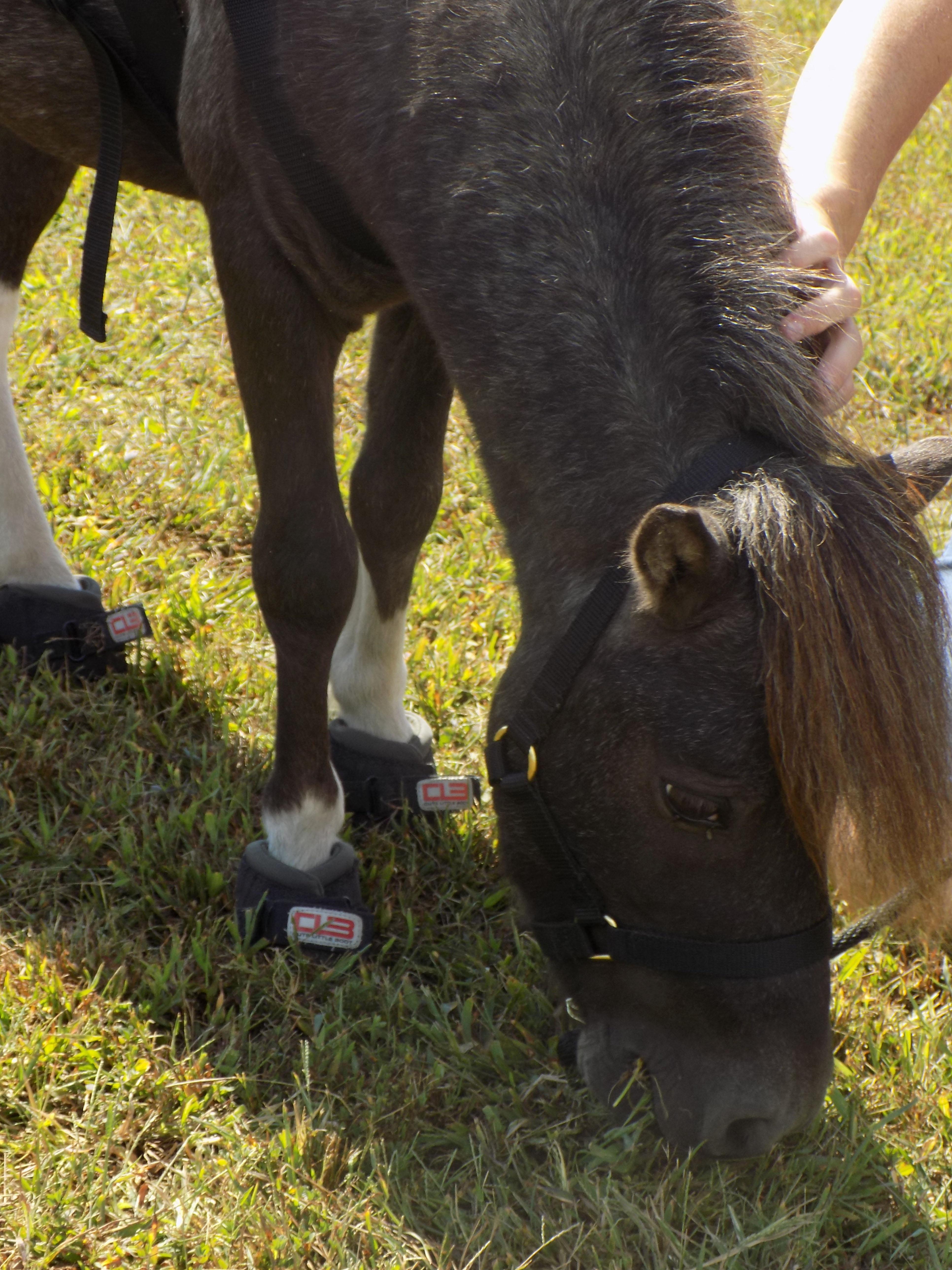 Flash grazing during the photo shoot. Photo by Noelle Maxwell.

Why minis? “They just do so well with the individuals,” said Lewis. “They can read their emotions and just go over, there’s certain individuals they’re drawn to, and they’re amazing to watch,” she added.

“In nursing homes, they’re glad to see a horse instead of a dog,” said Lewis, laughing. “They are, they’re like, ‘Awwww, horse!’ and every one they go to, they’re like, ‘is that a real horse?’ They’re just in amazement.”

Lewis’s focus on nursing homes came after seeing “how much joy the elderly get from having the little horse come in and visit. They’re always so excited for Flash to come visit, and he makes them so happy. Flash is very calming to most individuals – they may not be feeling very well, but when Flash comes in, all that is forgotten for the moment and the smiles begin.”

Lewis recounted stories of a woman in one nursing home they visit regularly who kisses Flash at every visit. Then, she added, “The first nursing home we went to, this gentleman made the kitchen bring Flash out a bowl of carrots,” adding that she doesn’t allow residents to feed Flash directly because of possible safety issues, so she fed the carrots to Flash from the bowl. “But they had to make sure he had those carrots!”

Her focus on special needs events, she said, was because of having a special needs daughter. “These are events that she is able to attend, also, and she’s proud to bring Flash with her. Flash has become a huge hit with these individuals and he just seems to have a special connection with them.” 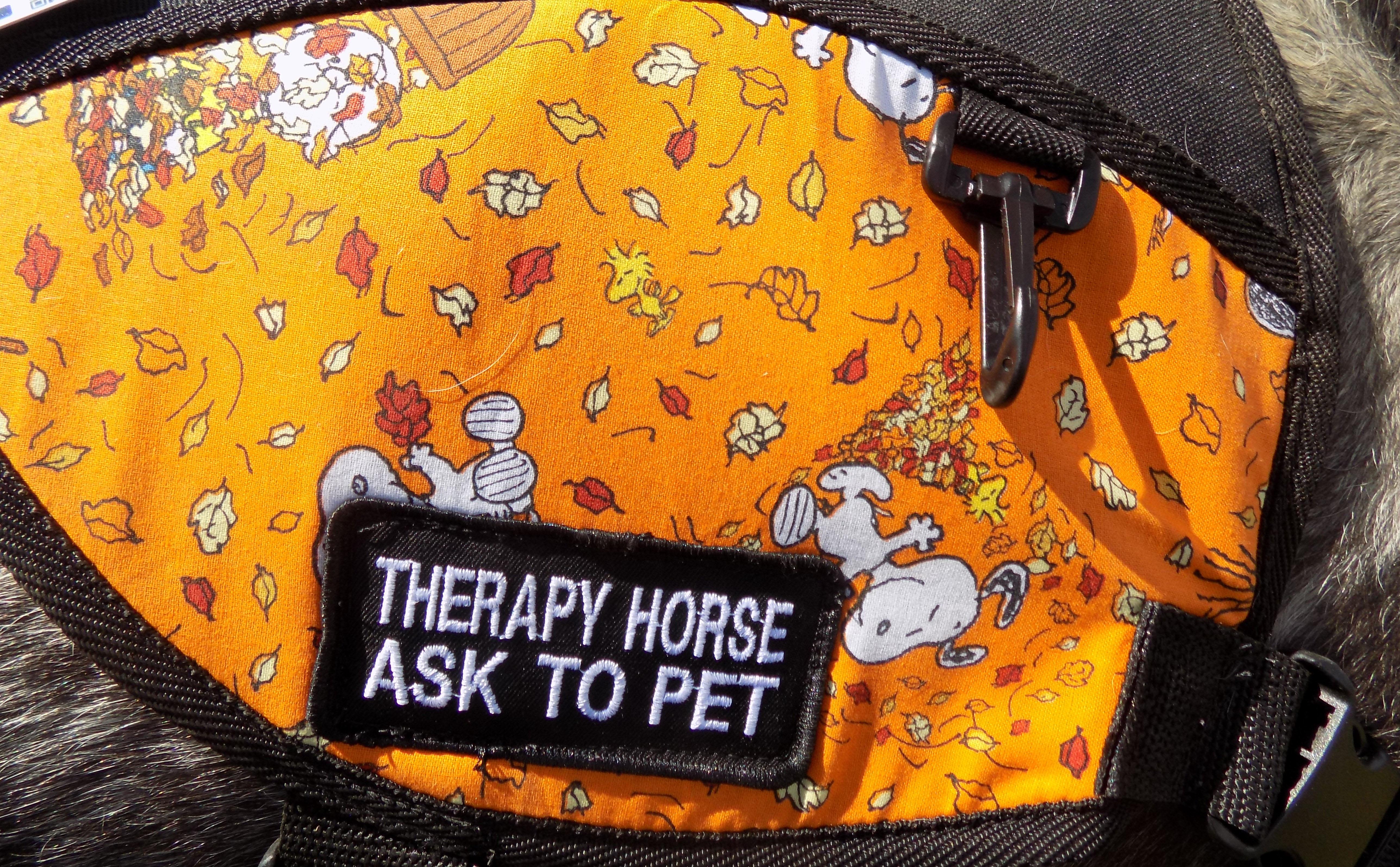 Flash is ready for Fall and Halloween in his Peanuts-themed orange therapy horse vest! Photo by Noelle Maxwell.

According to Lewis, Flash is one busy mini since he’s been registered. “People have not quit calling.” He’s been on 16 outings so far this year, with seven currently scheduled for the month of October. Flash typically takes a “vacation” between January and March due to weather, though Lewis added, “If the weather’s not bad and we can get him there and get him cleaned up enough” they occasionally do outings during that time.

Flash’s first outing for the new year is usually a special needs Easter Egg hunt which, said Lewis, “Starts us off with a bang and we keep on going!”