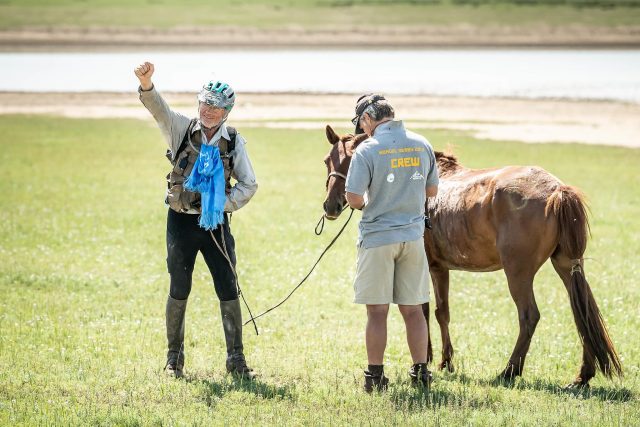 “Somebody had to win, it might as well be me, was my approach.” – Bob Long 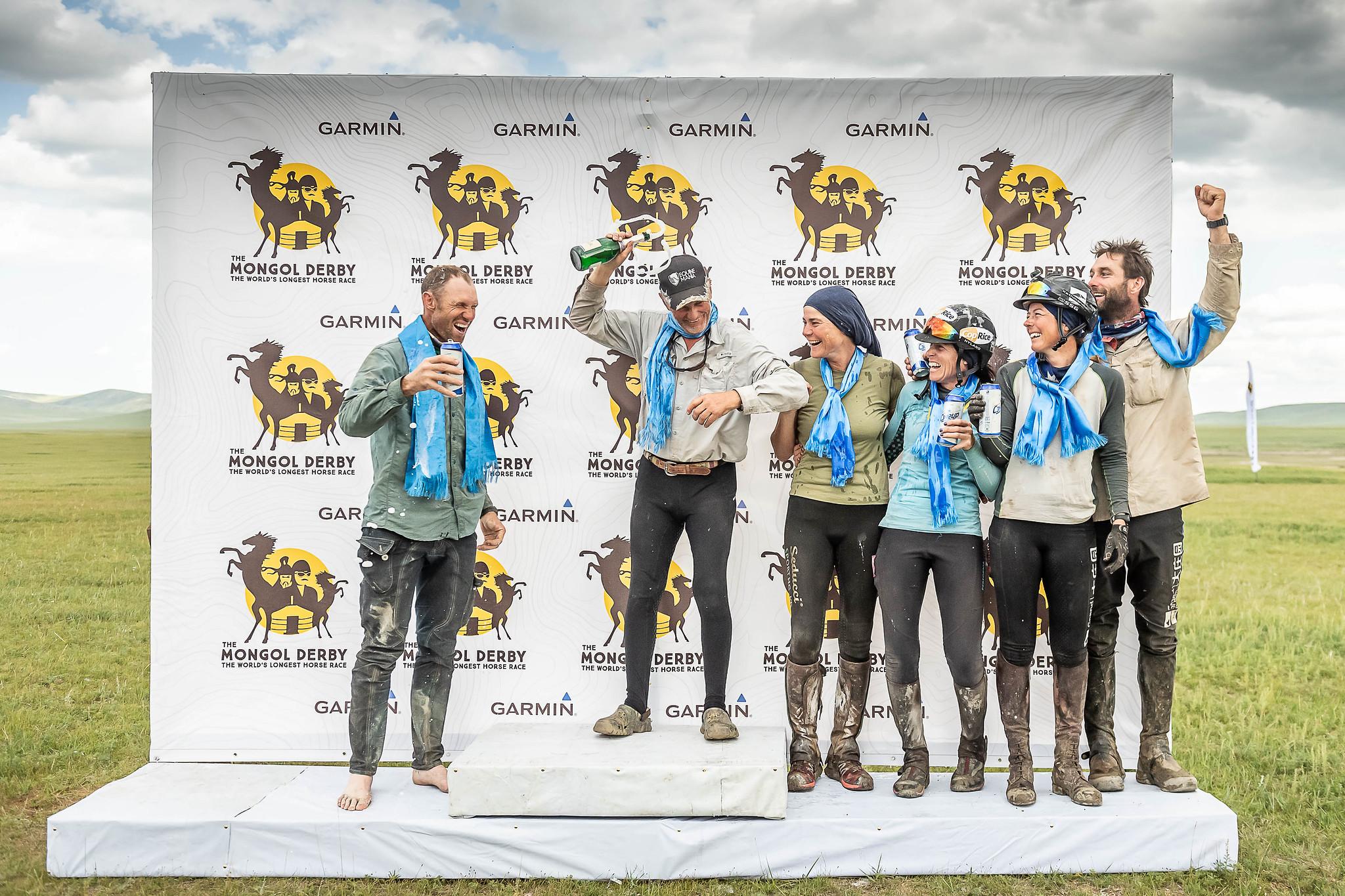 Long (center) with other competitors after the ride. Photo Credit: Sarah Farnsworth.

Described as “tougher than a box of concrete,” Bob Long, 70, of Boise, Idaho, won the 2019 Mongol Derby. Long, the oldest winner, said in the race summary, “Age is just a number – preparation trumps youth.”

He went into the race and did his best, saying, “It turned out that was good enough to win, that’s all.”

Joking he “didn’t even know how to spell ‘endurance’ until January,” Long’s spent his riding career working cattle and riding western performance horses. He grew up in Wyoming, competing in junior rodeos and paid his way through college training rodeo broncs. 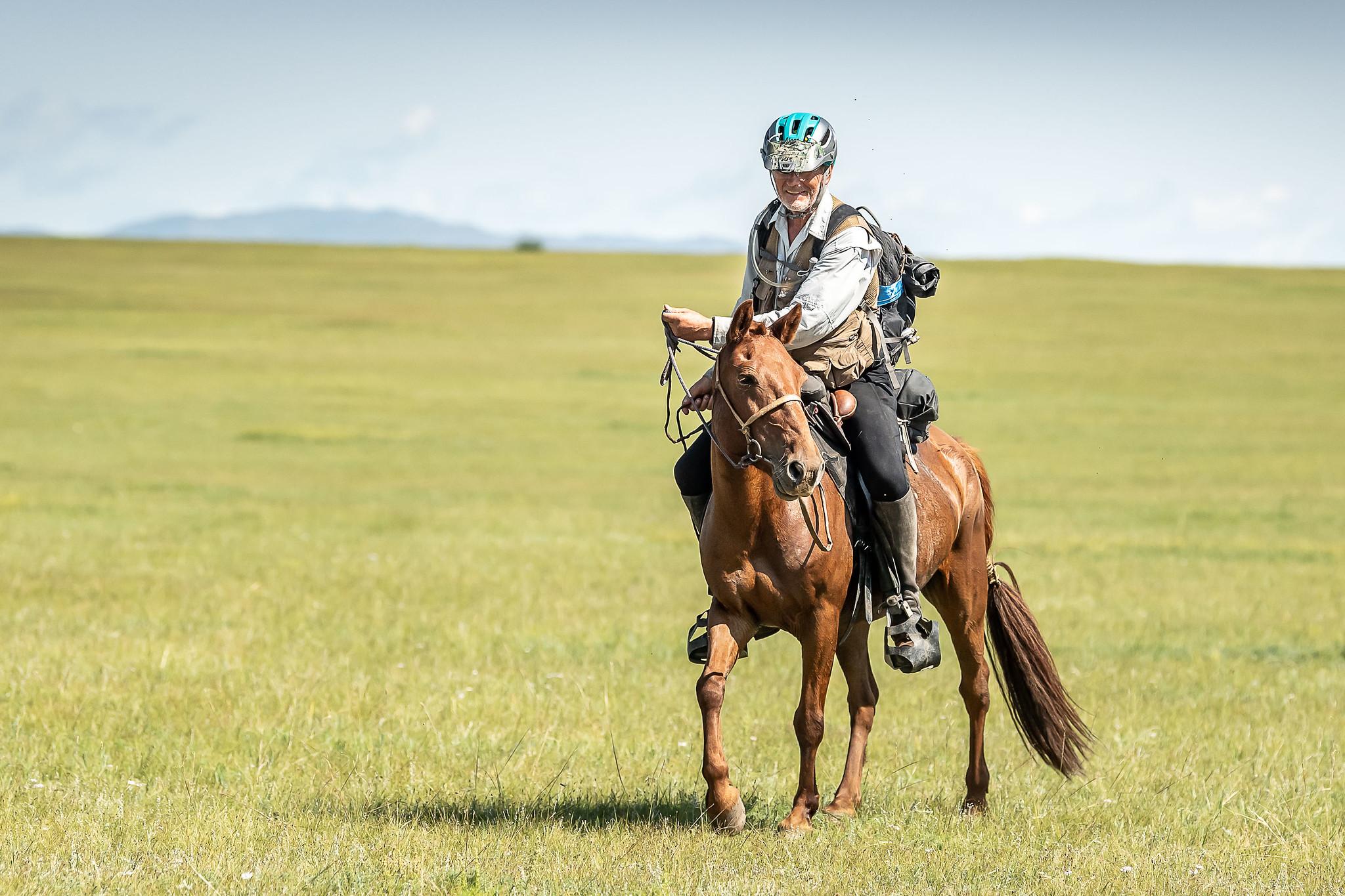 He was inspired to pursue the 650-mile trek across the steppes, which touts itself as “the world’s toughest horse race,” by watching “All The Wild Horses,” saying he entered because “I’d hate to think I can’t.”

In his heart, he wanted to win. “Mentally, I knew I had to compete,” he said, “but there were a few in my circle who I told I was going to win. Somebody had to win, it might as well be me, was my approach.”

Long went in as prepared as possible. How prepared? “I spent January, February and most of March in Arizona riding endurance horses and competing in endurance races,” he said.

He conditioned endurance horses, competing in two races during that time, riding 100+ miles weekly on four to five horses. He returned to Idaho in late March, staying at a cattle ranch through July. There, he rode four to five horses daily – barrel racers, ropers, cutters, “anything needing wet saddle blankets.” 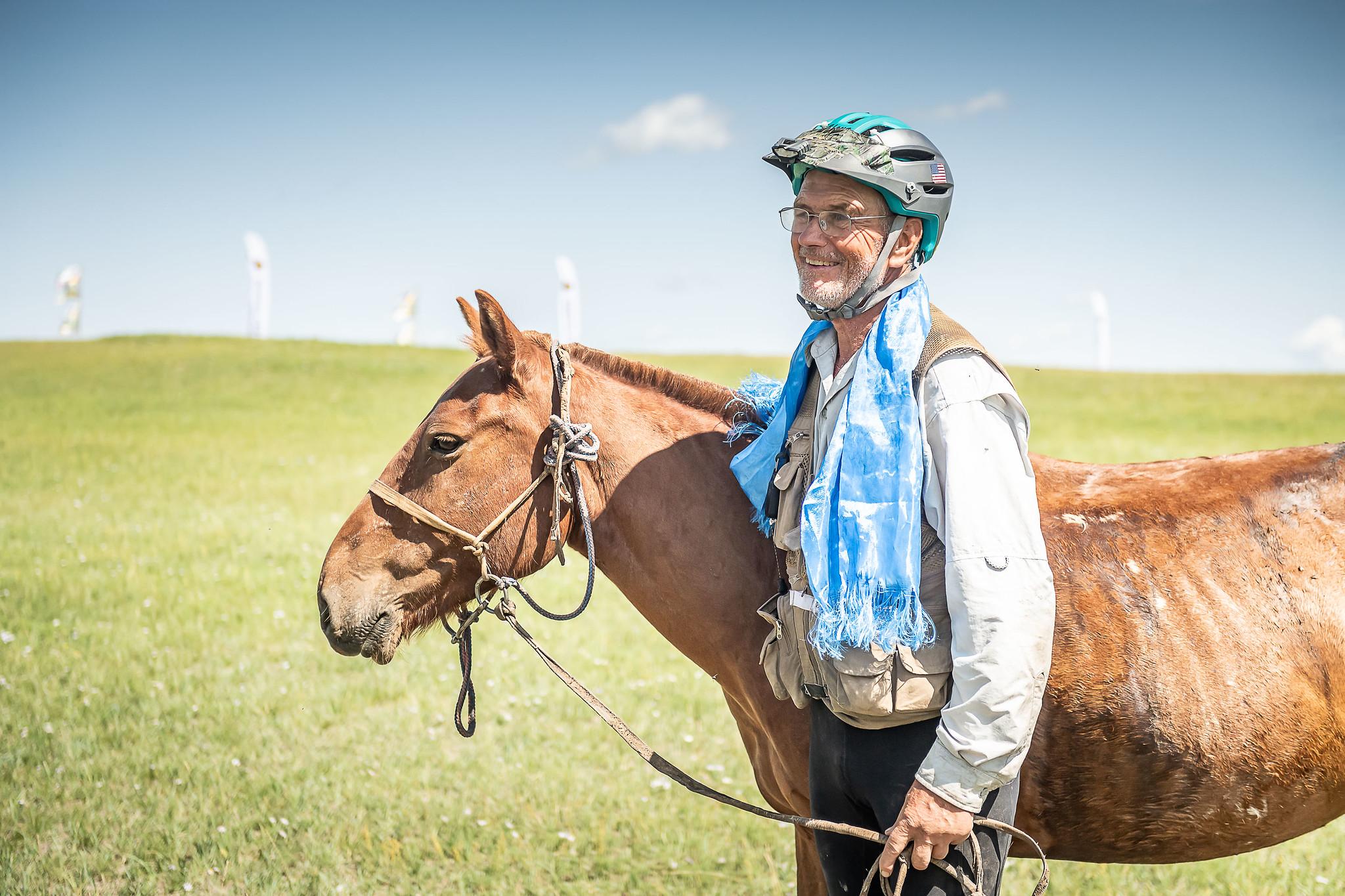 The biggest challenges were language barriers and “getting on a green broke horse and expecting them to break [into a run].” Usually, he continued, “it was a dead run.”

On language barriers, Long, who only spent one night in an Urtuu (horse station) would knock on a door and ask families if he could stay, saying “they were hospitable and warm, but the communication barrier was significant. When veterinarians came to check the horses, they had translators who Long used to tell families how grateful he was for their hospitality.

Why camp with families rather than stay at Urtuus? Two reasons. “Number one,” he said, “I was interested in camping because they said you shouldn’t. At the beginning of orientation, they made a big deal of camping out – it was discouraged, they didn’t want anyone doing it. So, I figured that was something I should try.”

Second, stopping at Urtuus meant risking the lead. Riders staying at Urtuus left all at once in the morning. Long elaborated, “If I had two minutes of riding time left in a curfew, they wouldn’t let you leave after 7:30 PM. One time, I left at 7:28 PM, riding four or five miles to get to a family Ger where I stayed. So, I didn’t collapse my lead and nobody caught up with me at that last Urtuu, but somebody could’ve and they would’ve been locked in for 30 minutes, where I was able to cover ground.” 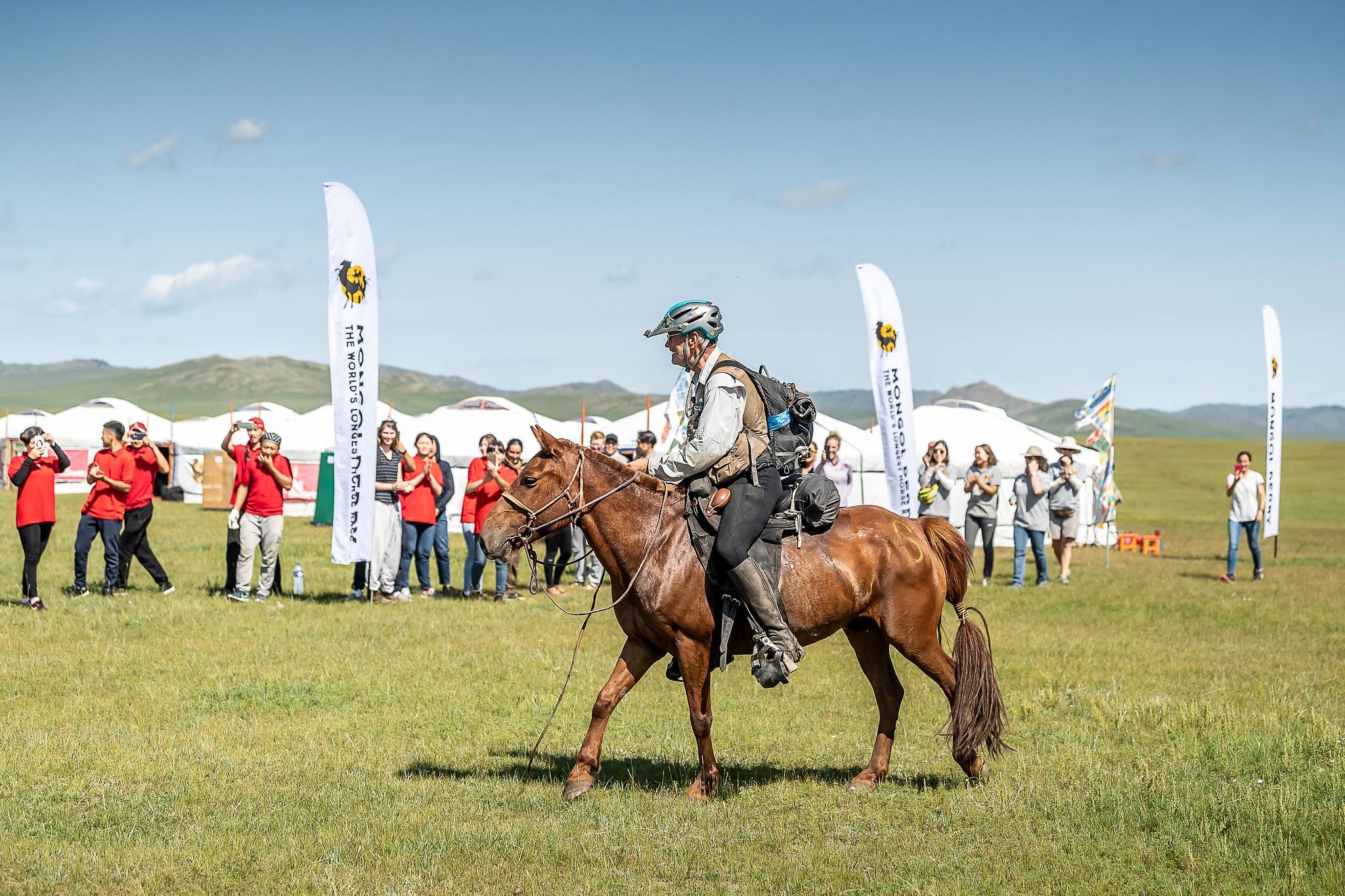 Two horses were particularly memorable. “One was a little horse,” not very tall, he said. “It took two herdsmen to hold him while I mounted.” Once the horse was loose, the herdsmen “pointed in the right direction” and the duo took off, running hard. That was the morning of day three, muddy, sloppy and wet.

Long continued, “I tried crossing a road and the horse slipped and fell.” They slid 15 feet in the mud. “I got off, he was on the right track of the two-track road, I was on the left. I jumped up and jumped back on as he was getting up because I knew I wouldn’t be able to get on without help. He took off again, running. The riders trying to catch up with me rode up far behind and were yelling to make sure I was alright and ‘how did I feel?’ I turned and said I was ‘scared sh-tless and loved it.”

The other memorable horse was a “really good” four-time Naadam (national festival) winner. Long said, “His family met me on the steppe and followed along in their little black car. It turns out he [horse owner] was an elected official.”

Long tied blue ribbons in his mounts’ tails when leading, “Anointing that horse as a champion,” he said, and presenting the ribbon to herdsmen at the Urtuus. The ribbons were the idea of Long’s friend, Stephanie Nelson, who he said was supportive of the race from the beginning.

“We’ve always kept our blue ribbons,” Long said, “it was one of those things, we’d throw them in a box” after competing. Nelson discovered that blue is a color of honor for horsemen, herdsmen and horses in Mongolia and suggested Long take a handful of blue ribbons.

“I didn’t think much about it,” said Long, who put the ribbons in a baggie. “Then about the third day, when I started leading, it occurred to me that I should recognize these horses.” Long pulled out the ribbons and tied one in his horse’s tail – on the first horse, he had to tie a knot in the tail to attach the ribbon, afterwards, herdsmen started wrapping tails so Long could attach the ribbon, and would even compete for Long to ride their horses. 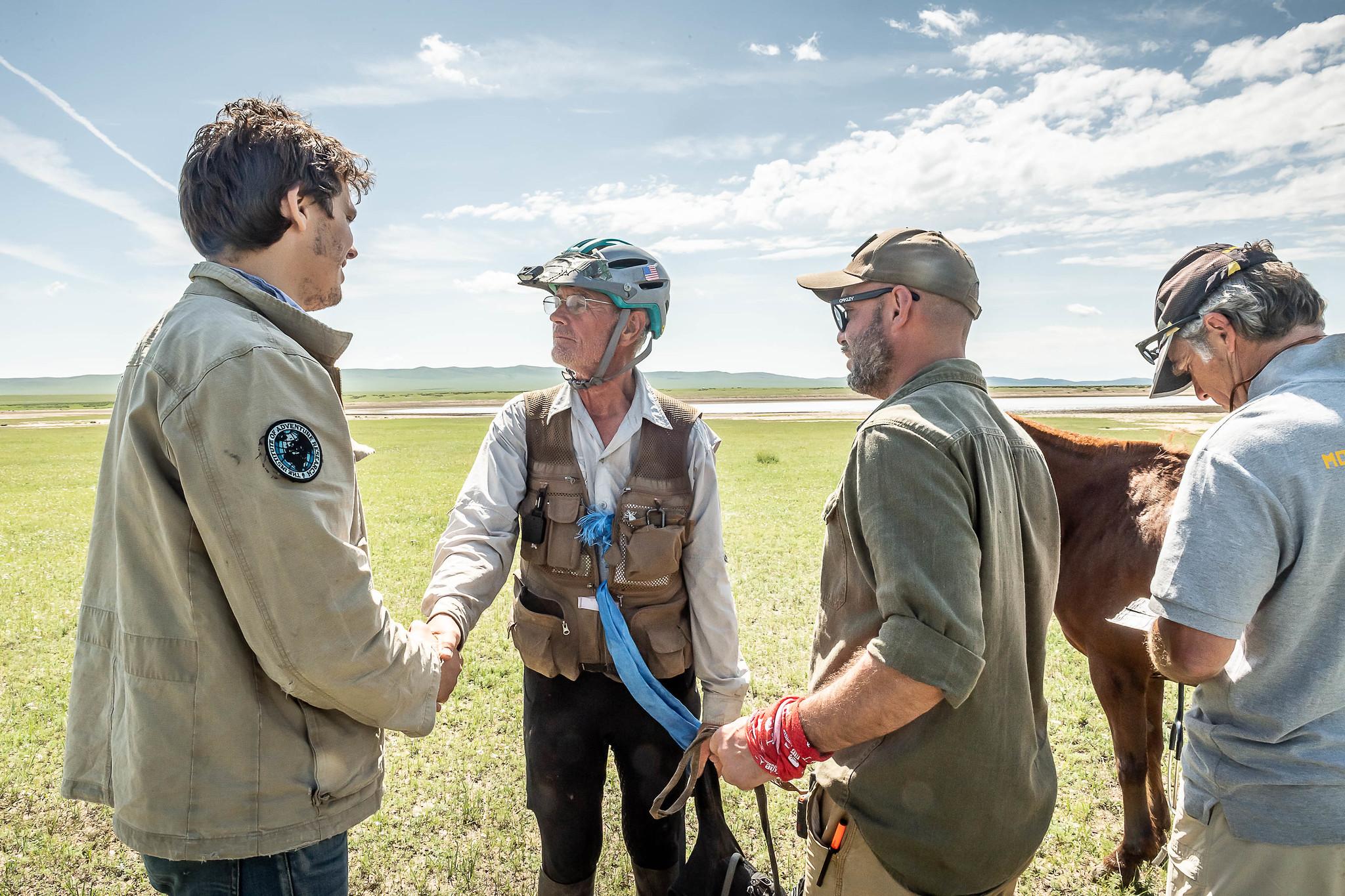 “For me to have won,” said Long, “is a highlight of my life and personal best.” He wanted to thank the Derby management crew for hosting the event which was “flawless in execution” and admired the dedication and commitment of the “dead-serious, thorough” veterinarians.

Finally, Long said he couldn’t say enough about the hospitality of those who took him and the horses in during the journey.

Author’s Note/Correction: An earlier version of this article cited that Long and his horse slid “215 feet” in the mud. That was incorrect, it was 15 feet.