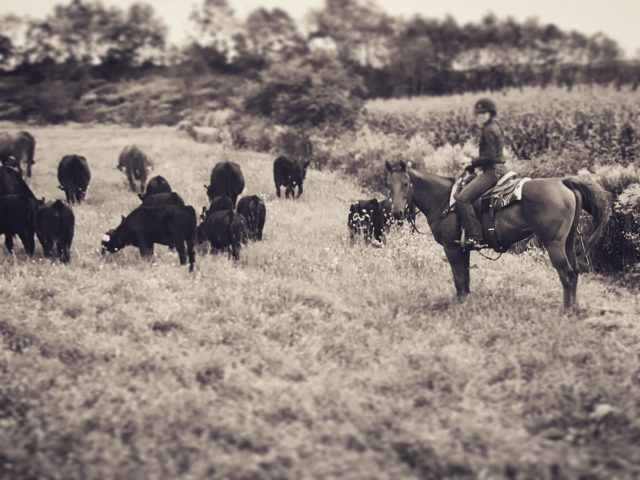 “…truthfully, I forget most of the time that I’m wearing that helmet. It’s just become an extension of myself when I put a foot into the stirrup, as natural to me as my jeans and boots.” 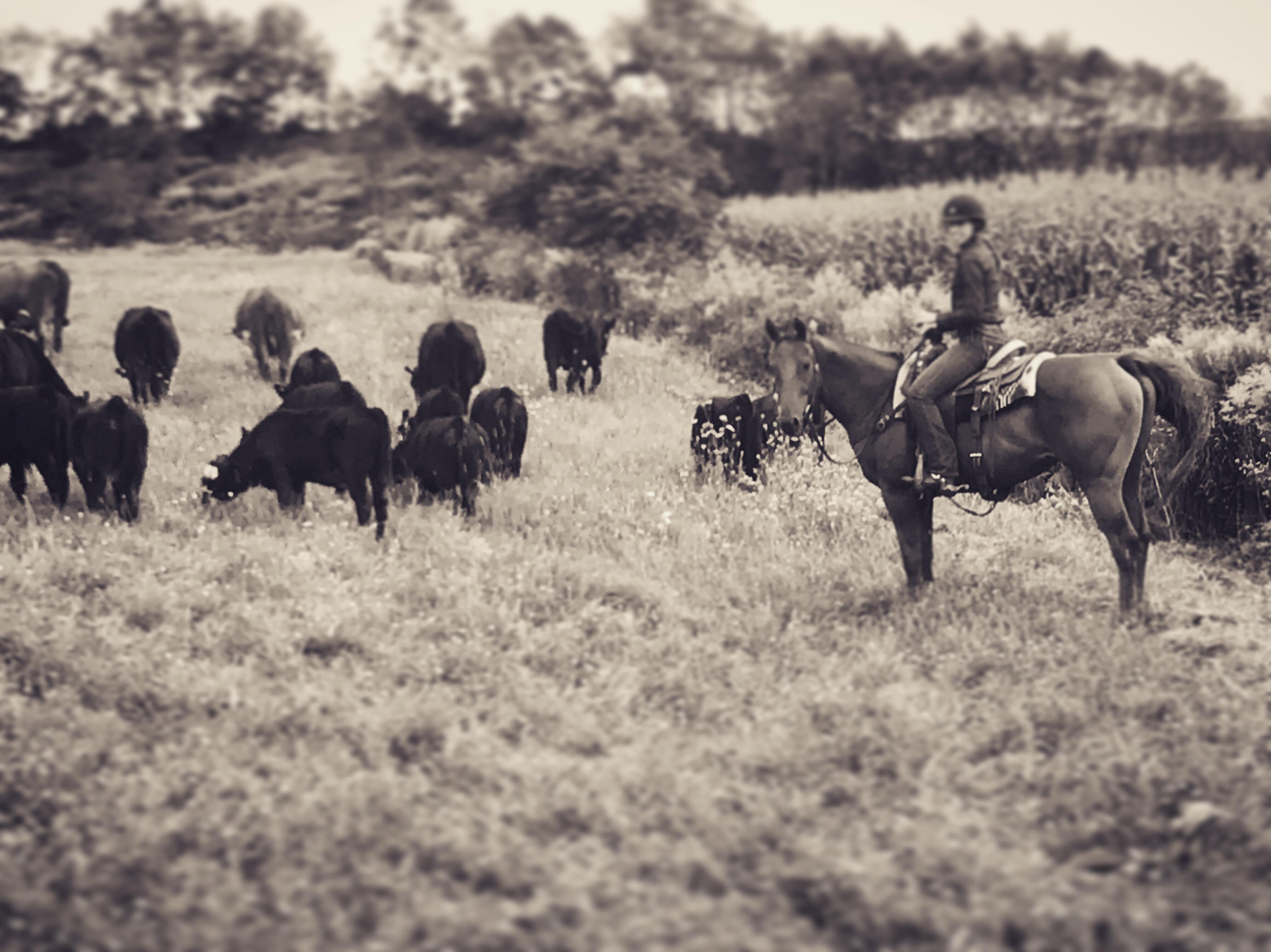 We were all in the bleachers, maybe eating lunch or snacks, I don’t really remember — we were that kind of happytired you get to feeling midway through the show weekend, when you’ve gotten a couple of good classes under your belt and you’re relaxing now ringside to watch the other levels. The horses were tucked back into their stalls, munching hay or dozing, and we were swigging water out of our bottles and chatting idly while the bridle classes ran.

It was a good day, a good weekend. We were all aware of what was happening in the ring, our eyes following the track of the cow and horse and rider as they boxed, then made their fence turns, then circled.

And then something happened that we couldn’t see from our perspective, somewhere up the wall from where we were sitting. I heard later from someone closer to the scene that it was a freak thing, the kind of wreck you can’t really ever predict happening because there was no way to see it coming, the kind of thing you can’t prepare for because the odds of it happening are so small.

It was a wreck for sure, the kind of wreck where someone else comes to collect the horse and the ambulance is called and the rider is taken away on a backboard. Ultimately, the rider was just fine, and we chatted later when she came back to walk around the show grounds and take care of her horses. All’s well that ends well.

But in those moments of interminable silence while the EMTs hovered over the arena dirt and we all waited in a suspension of apprehension and fear, I remember a woman walking quickly out of the building, away from the scene, as though perhaps it was just a little too much for her to bear, and she paused in front of me, reached her hand out to me. I recognized her as one of the mothers of one of the junior riders.

I was so surprised that for a moment I couldn’t speak. I think I thanked her in return, lost for words in that bleak moment before we knew it was all okay.

Because truthfully, I forget most of the time that I’m wearing that helmet. It’s just become an extension of myself when I put a foot into the stirrup, as natural to me as my jeans and boots. I choose to wear one, for reasons I’m sure I don’t need to explain: there’s plenty of science on the role an ASTM-certified helmet can play in reducing one’s chances of suffering a TBI.

But I’m past the point now in my horse life where I feel like I need to explain that to anyone. We can all make our own choices, after all, and most of the riders I show with choose to wear a cowboy hat. That’s fine with me, really. I might wish you’d stop taking those chances, but I respect your ability to make your own decision.

I would like to think, however, that my lack of feeling like I’m the odd man out, the ease with which I click the buckle and throw my leg over my horse and go grit it out in the reined cow horse pen with the rest of them, does perhaps set that example that it’s not the clothes that make the cowgirl — it’s the confidence. And if that can help encourage one more rider to make the decision to mind their melon, then those little things can add up to a world of difference. 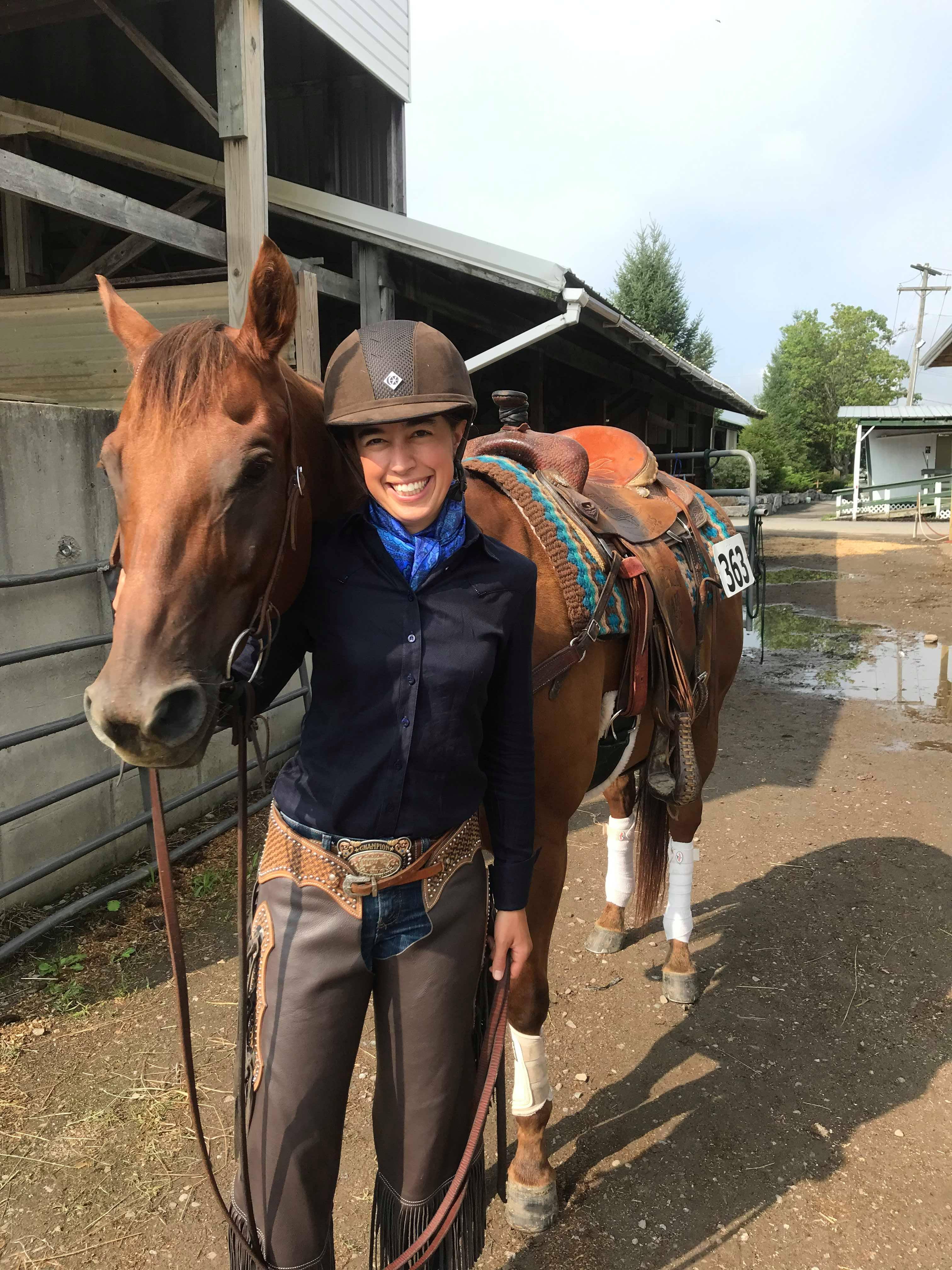 I respect your right to choose what you want to put on your head. But know that if you choose to put on a helmet rather than a hat, I won’t see you as any less of a cowgirl. It’s more than the clothes, after all. It’s what’s in your head and your heart that counts — and I choose to protect my head.