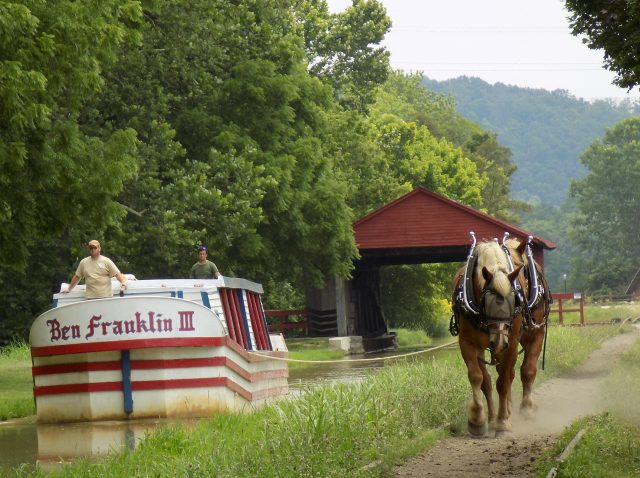 Belgian horses Joey and Jourdan carry on a tradition that began in the 1840s by pulling the Ben Franklin III, a horse-drawn canal boat in Metamora, IN. 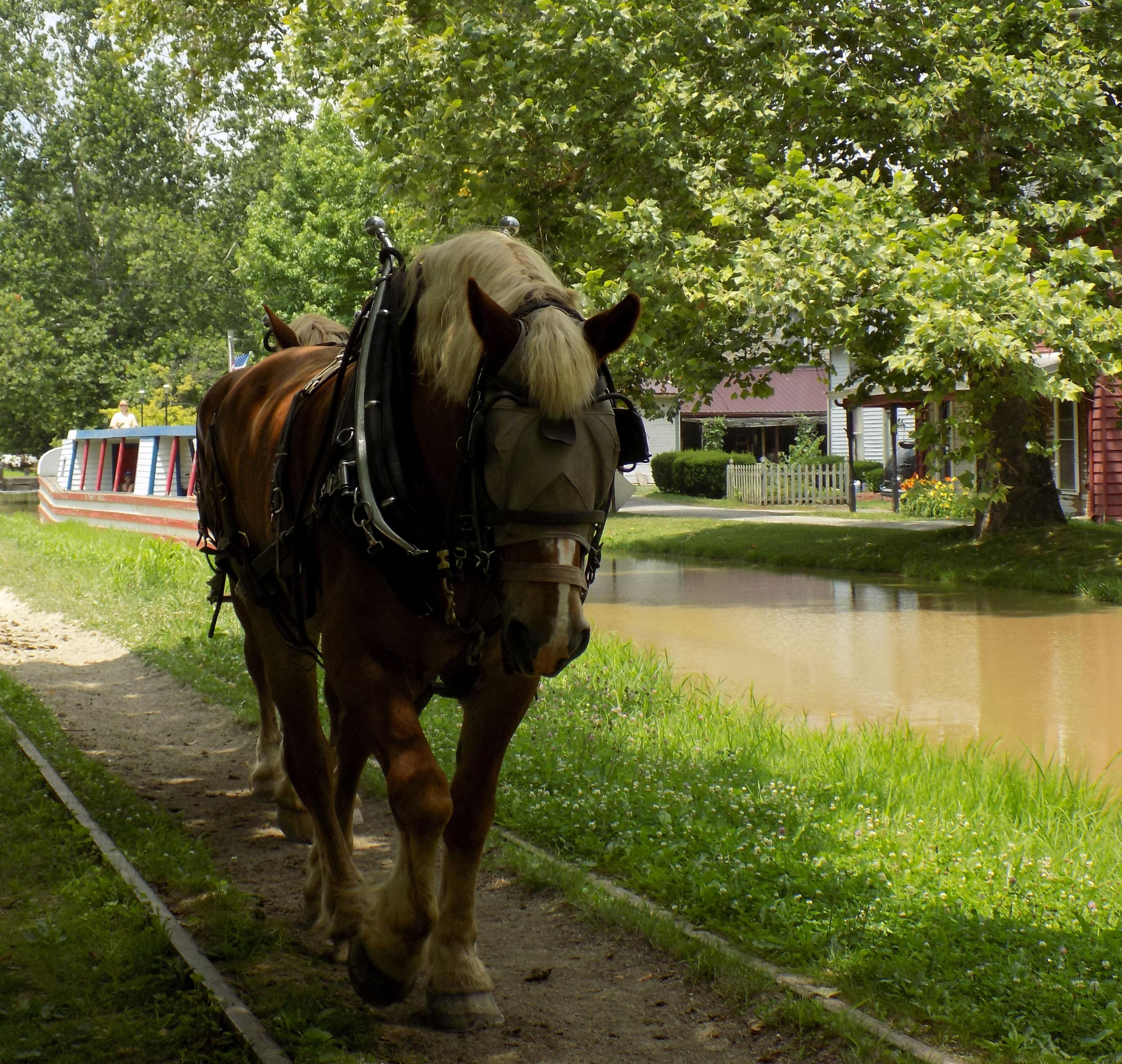 A small community featuring a historic grist mill and several quaint shops, Metamora, IN is also home to a 14-mile stretch of the historic Whitewater Canal, including Duck Creek Aqueduct, which is widely believed to be the only covered aqueduct in the United States. Aside from the aqueduct, Whitewater Canal was once a 76-mile connection transporting goods from the Ohio River in Lawrenceburg, IN to Hagerstown, IN. Besides checking out the shops, visitors can ride the Ben Franklin III, a horse-drawn canal boat. 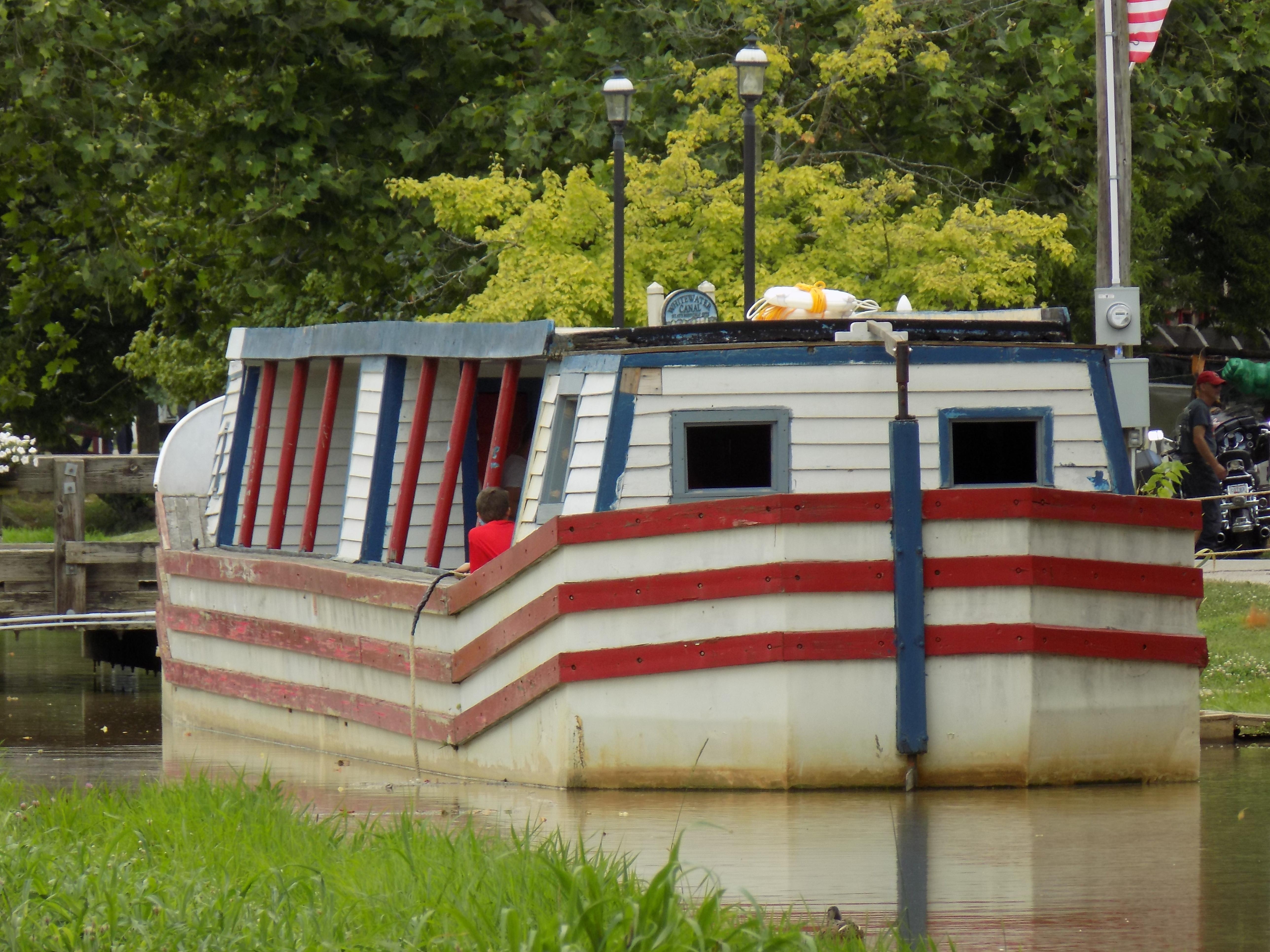 Yes, horse-drawn. Why? When the canal was first built in the 1840s, there were, of course, no motorized vehicles, so the original boat was designed to be pulled by mules. When the canal became a state historic site in the 1940s, and eventually developed into a tourist attraction offering boat rides, the boat, in keeping with tradition, remained horse-drawn. So, who are the horses who pull the boat, and what are their lives like? We spoke with curator Jay Dishman to find out.

The current horses, Joey and Jourdan, are Belgians, half-brothers, 16-years-old, 17 hands high and they’ve been with Metamora for 12 years. Why Belgians? According to Dishman, “When we first had horses here, we had some different breeds,” but “the first horses who were Belgians were Tony and Rex and we stuck with the breed because we like them, we’re familiar with them and we just decided to go with that.” 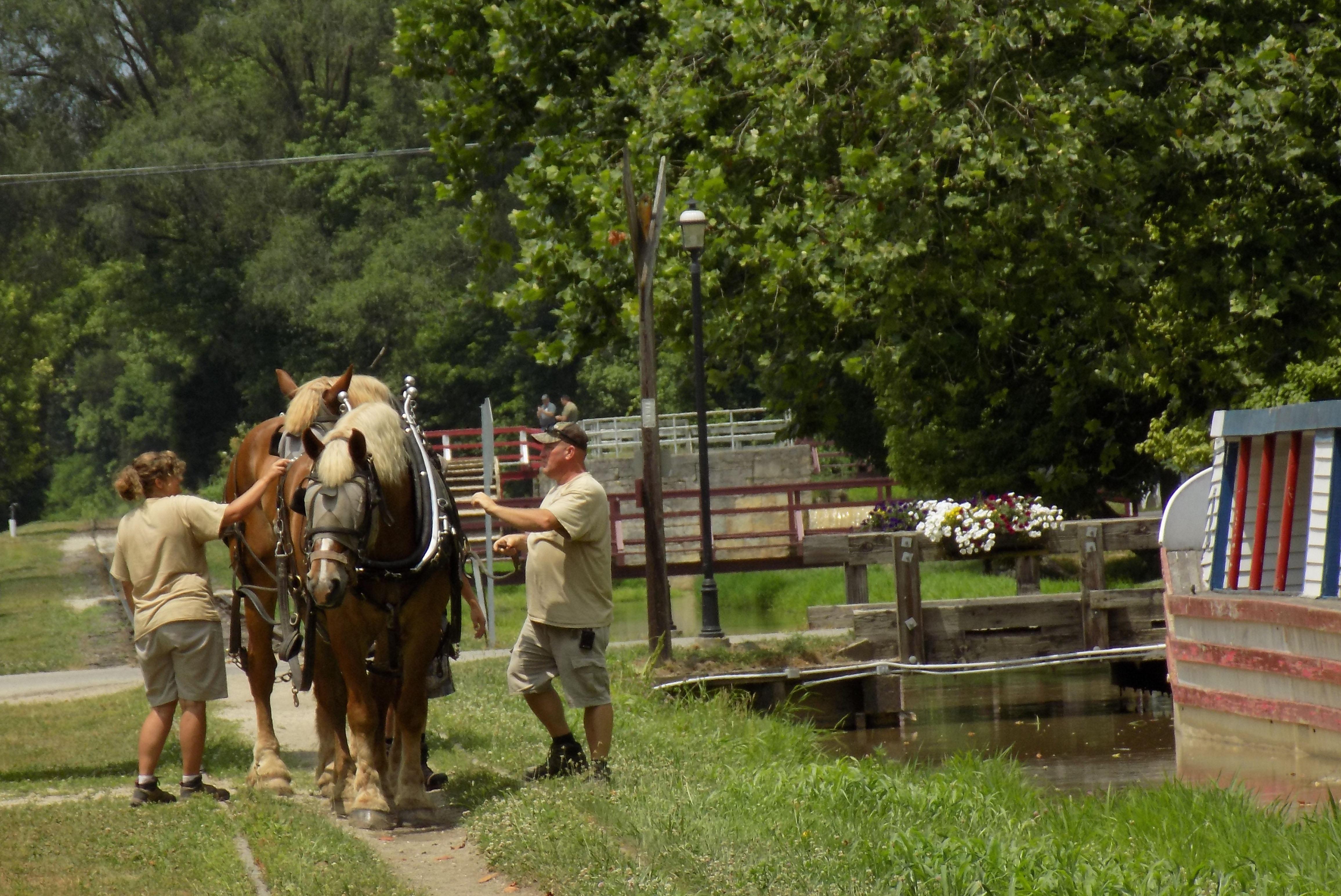 Joey and Jourdan being hitched to the boat. Photo by Noelle Maxwell.

Dishamn added that Joey and Jourdan “have a gentle disposition; they do get surprised, but they’re pretty good with most noises, though if a motorcycle pulls up near them, they don’t like that much at all.” When not pulling the boat, the horses can be found in the stable near the canal. They love visitors, especially those who pet them and feed them apples. They also like ice cream and have been known to steal an unwary visitor’s cone! When not working, the horses live on a nearby farm. Visitors may notice Joey and Jourdan’s bobbed tails, which, per Dishman, was how they arrived.

Pulling the boat is easy for them, said Dishman. “The horses work from the first of May through the end of October, five days a week,” and typically make five trips a day, visitor interest and weather-dependent. If the heat index is over 105, then the horses don’t work. A trip usually takes 20 minutes; the horses pull the boat down the canal, then are unhitched while the boat passes through the aqueduct, then the boat reverses, the horses are hitched back up and pull the boat back to the starting point.

When asked how long the horses serve, Dishman said, “We try to work them into their 20s and then it depends on their health.” Usually once they’re in their early 20s, they retire and “live out their [lives] in the pasture on the farm. We’ve had good luck and not-so-good luck. These horses [Joey and Jourdan] we’ve had good luck with. We like to keep these animals as long as we can.”

As for how new horses are selected, Dishman said they “check out ads, make phone calls and go out and look at the animals,” matching their funds to the available horses. So far they’ve been fortunate to buy horses in Indiana. They generally buy horses between three and five years old, preferring them closer to five, so they’re mostly finished growing and in same-age pairs. With Joey and Jourdan being 16 this year, Dishman said they’d “probably be buying horses in the next few years.” 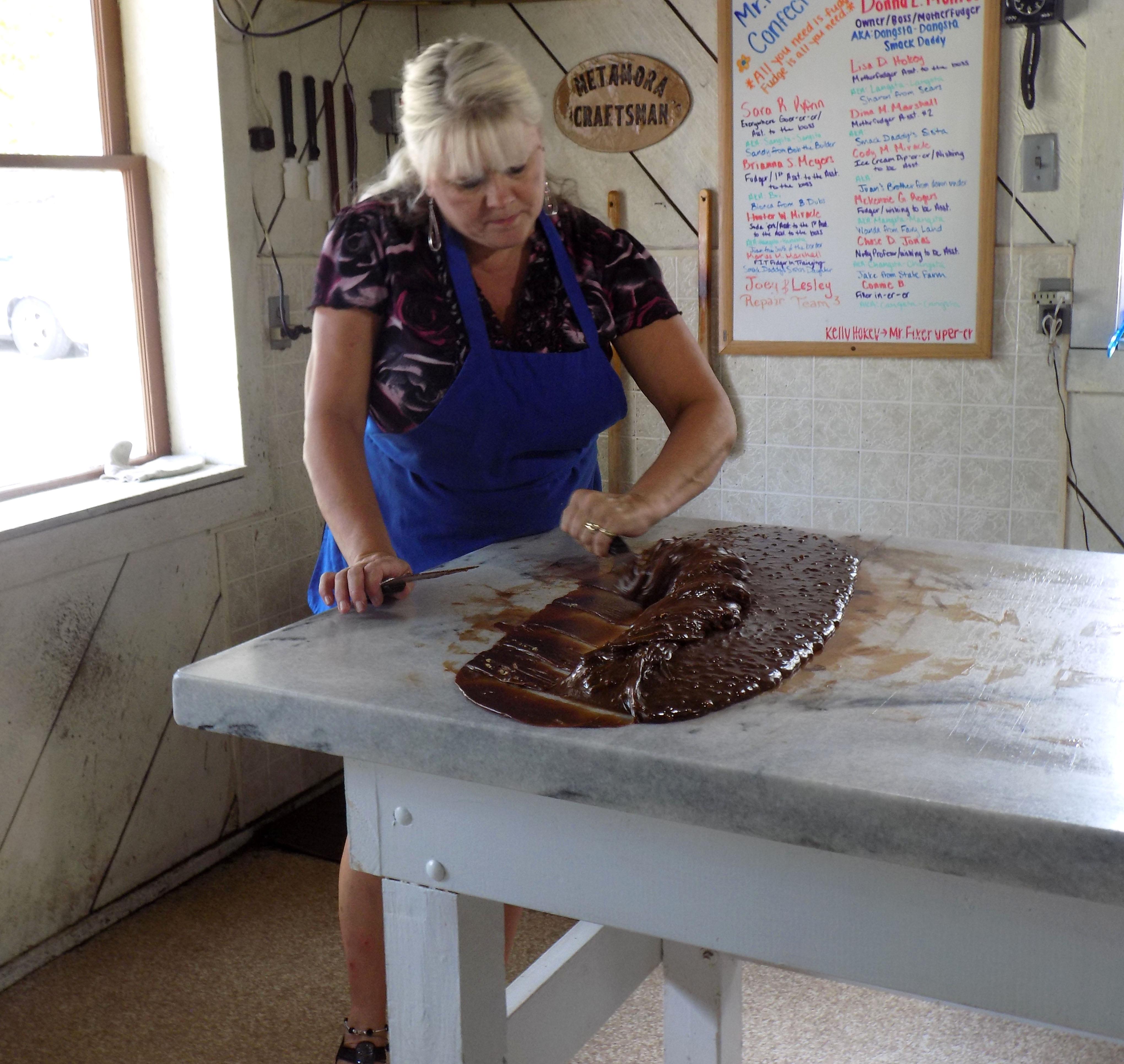 Besides the horses, boat, shops and grist mill, Metamora is home to the Whitewater Valley Railroad and hosts numerous events including hitching demonstrations featuring the horses and festivals like Canal Days, a Strawberry Festival and the Christmas Walks. Go riding and go Metamora!