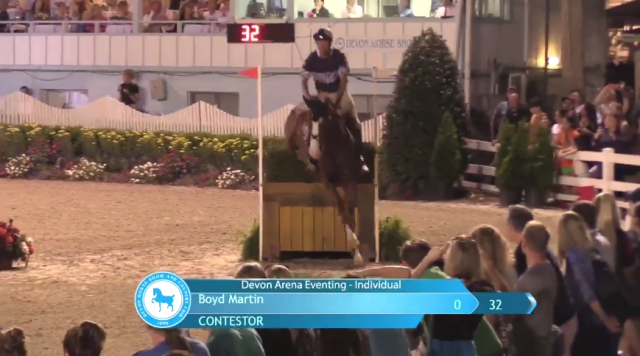 Boyd Martin brought home the win in the Arena Eventing at the Devon Horse Show over the weekend: watch highlights from the jump-off round here!

You don’t necessarily think of eventers as “sheltered” — after all, they’re out there riding in the open country, battling the elements and jumps that don’t fall down. But as Boyd Martin pointed out to the press, arena eventing brings a new element of challenges that many of us in the show ring disciplines wouldn’t think twice about: “It’s good for us eventers to have this class. It’s a bit of pressure, a big crowd, warming up in the dark and the shadows everywhere. It takes us out of our comfort zone, so I think it’s good for us.”

Huh. Never thought of it that way, but I guess when you’re used to just heading out for the hills in daylight hours, even the massive Dixon Oval of Devon starts to feel a little spooky and claustrophobic.

Either way, Martin and his mount Contestor clearly had it all figured out for the hybrid cross-country-in-an-arena/show jumping competition that’s been part of the Devon landscape since 2017:

Contestor is owned and bred by Denise Lahey and Pierre Colin. He finished eighth in last year’s arena eventing competition at Devon. This year, he was one of only three fault-free trips.