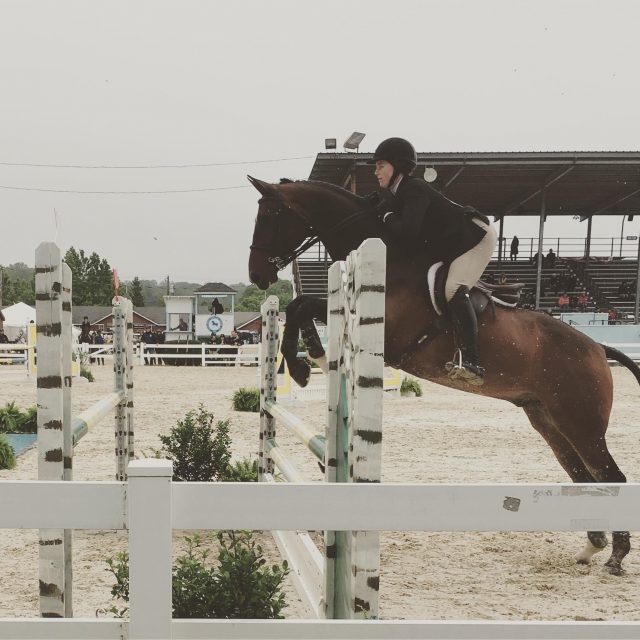 ‘Devon. Just the name itself brings up waves of nostalgia.’

The Devon Horse Show opens today, and in honor of the iconic competition, we’re reprinting this essay originally published on our sister site Jumper Nation in 2017 by Horse Nation managing editor Kristen Kovatch.

Devon. Just the name itself brings up waves of nostalgia, memories of cramming into friends’ cars as a kid and careening down the back roads that would bring us to this wonderland of equestrian delights. Even knowing most of us would never ride there competitively, the show grounds were still ours by some local right; I remember plenty of late spring nights watching the sun set behind the pearly blue of the Dixon grandstands as the lights turned on, our mouths cheerfully puckered from sucking on the iconic Devon lemon stick.

Let’s make one thing clear right off the bat: I’ve never ridden in the Dixon Oval. In fact, I’ve never even ridden in the Gold Ring. I’m fairly certain that at some point in my childhood I probably rode a carousel pony in the country fair, but when my greatest achievement by age 15 as an equestrian was finally making it all the way around the local 4H ring without doing a header over the first fence, it was pretty clear I wasn’t destined to be bringing home any equitation trophies from Devon. Yes, the Devon of my memory was usually a hot, humid affair, but today was something else entirely. I peered nervously through the clouds of mist and rain on the highway as I careened along with the flow of traffic, the names of the exits increasingly familiar as they loomed suddenly out of the fog. On the main drag off the highway, the illuminated Ferris wheel looming suddenly over town brightened the grayest of mornings. I was back. I couldn’t take the grin off of my face, even as cold rain somehow found its way beneath my hood to run down my collar.

Soon huddled by the heater in the press box, I watched a hundred and twenty rounds of equitation, some of the best junior riders in the country aboard horses impeccably turned out. They were not flawless — the conditions perhaps contributed to more than one error and I’m sure plenty of dreams were dashed this morning in the slop. No, I never rode in the Dixon Oval myself, but as each junior rider made their way through the in-gate to start their round, I let myself imagine what each rider was feeling, because I had been there too in my own way. Everyone got nervous. Everyone anxiously recited their course out loud to their trainer, no matter how polished and put-together they look.

Often in reporting sport, we forget the individual stories. As I spoke with class winners in the out-gate, I was reminded that it was a hundred and twenty individuals I saw putting their hearts into their ride, splashing through downpours and mud. Those who rode for every point were so open, so relieved and so happy that I don’t think they felt a single drop of rain. One common theme with the riders I spoke to was how special Devon is as a show facility. Whether it was the history, the beauty of the grandstands and arena, or some indescribable, intangible mystique about stepping into the Dixon Oval to perform, each rider felt it. I felt it too, some echo of memories from years ago as a younger self hung on the arena rail and watched her heroes canter by.

It’s a little ambitious of me, perhaps, to say I see myself in these talented young riders who have already accomplished so much more in the show ring than I have and likely ever will, but in this rainiest and sloppiest of opening Devon days, I am reminded that you can come home again, even if it might not be in the same way that you were expecting.