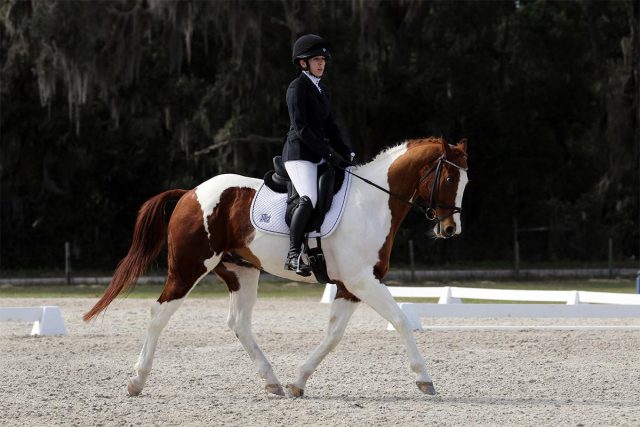 Ainsley Jacobs and her horse JJ compete in their last USEA Novice three-phase. 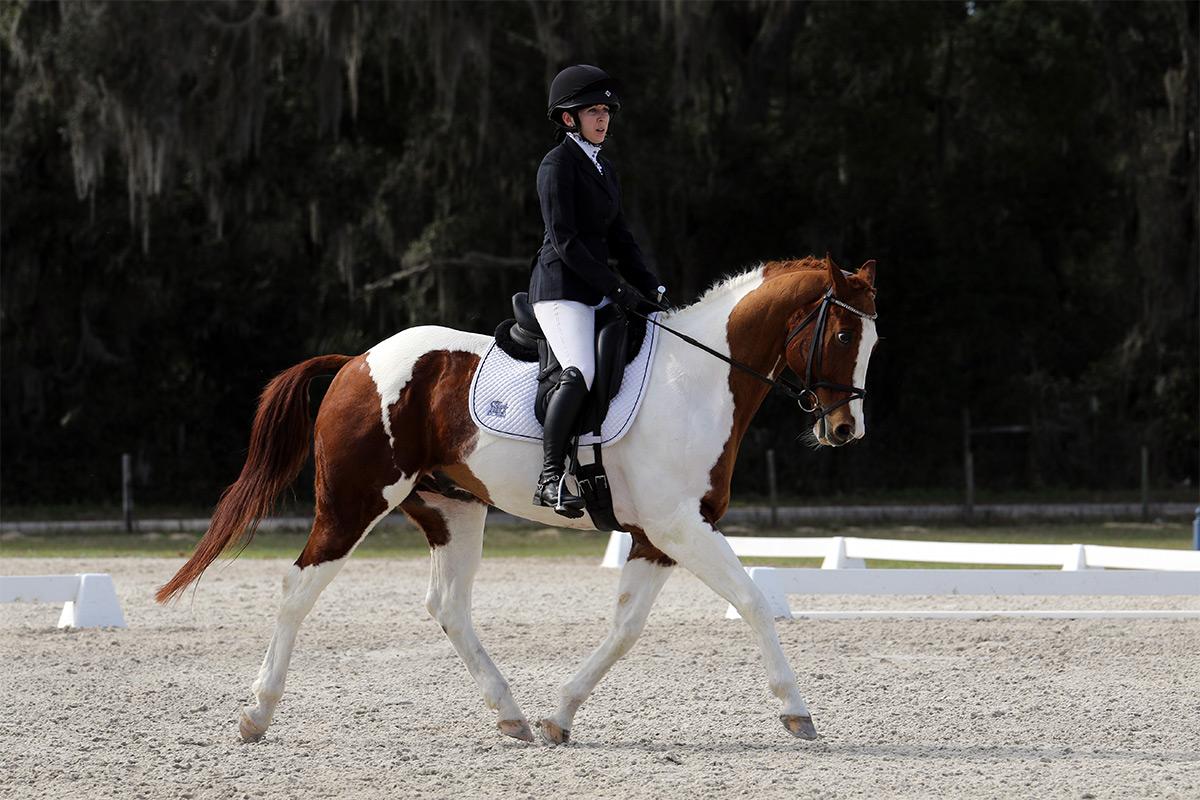 Someone had his fancy pants on! (Photo by Carol Lane Tresan)

After spending over a week in fabulous Florida competing, riding with greats like Buck Davidson, having epic flat lessons, and working on our weaknesses, it was time to put it all together with the grand finale with one last USEA Novice 3-phase event.

When I was in Florida last January, I competed at Rocking Horse Stables in Beginner Novice. To wrap things up for this week, coach Lauren Turner and our River Birch Farm team registered for Rocking Horse II and I was so excited to go back to the beautiful facility to try my hand at their Novice course!

Friday night, Lauren gave me and JJ another flat lesson tune-up. He is going really well in the new bit so we kept things short and ran through my test a few times.

The next morning, we got up early and hauled from our “horsie hotel” at Wise Horses Farm over to Rocking Horse. We braided, got the horses cleaned up, and got started.

JJ was feeling good in dressage warm-up, and I was feeling really confident as we headed down the center line. Sure, there were moments where I didn’t do a good enough job preparing him for turns or changes of direction/gait and he tried to trot during our free walk since he knew that next part was coming soon, but overall, JJ felt way better than usual. I halted and saluting thinking we would end up in the low 30s, if not high 20s, but didn’t want to check my score until it was all over.

For stadium, the course was really odd. Whereas last week the cross country was insanely challenging (and we’re now referring to that event as the “Novice Olympics”) and stadium was stupidly simple, this week the opposite was true – cross country seemed really straightforward but stadium was super complex! Tons of turns, bending lines, and basically just going all over the arena.

Fortunately, I didn’t get lost on course and piloted JJ around like I (kinda) knew where we were going. We had one really hard rub but – amazingly – the rail stayed up! I believe the eventing gods were smiling on us, since it was JJ’s “gotcha” day from when we officially became a team three years ago.

Anyway, with Saturday finished, we walked our cross country courses, then JJ got some love, cookies, and a trailer ride back to Wise so we could go again the next day. 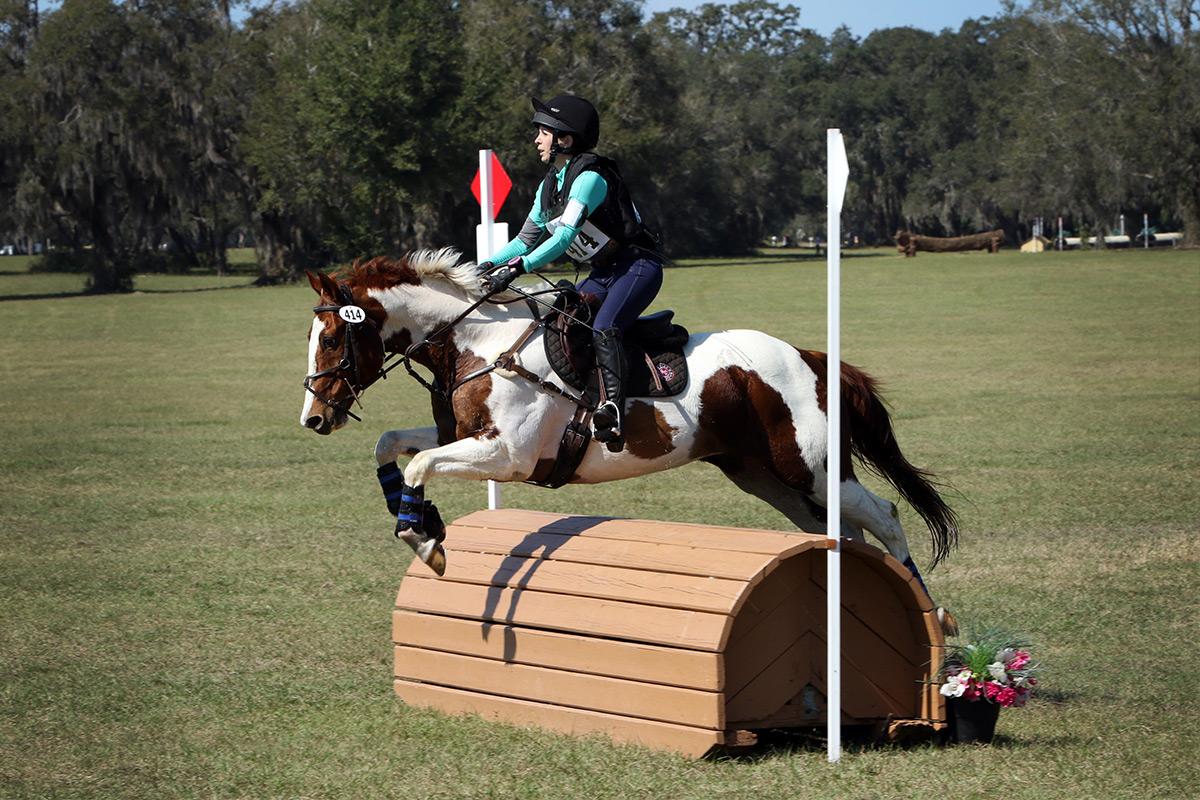 JJ made the course feel easy, and small! (Photo by Xpress Foto)

I got up on Sunday excited for cross country. The Novice course had looked really easy, and while I knew not to discredit any of the jumps, I definitely wasn’t feeling my usual butterflies of apprehension. Just to be doubly sure that I didn’t screw things up, I walked the course for a second time before tacking up.

Heading to warm up, JJ seemed keen to get started. He wasn’t a firecracker, but he wasn’t sluggish either. We had a few nice jumps, then headed to the start box where we left with a reasonable pace. The course itself flew by with no questions or challenges whatsoever, and it wound up being every bit as easy and as fun as I expected! (And yes, I remembered to check my watch this time!) The only funny thing I noticed was that JJ was swapping leads a lot (and he chipped a few distances) but I really believe that was because he was simply so tired from all the work the week before. We finished double clear (woohoo!) and I think we were both relieved to be done.

With all three phases complete, it was time to check our dressage score. I was a bit dismayed (and super surprised) to see we had scored 36.20 – it was actually worse than the week before, despite being the exact same test and despite feeling a million times better! What the heck? Further proof that I really, really don’t understand dressage… oh well.

We wound up 5th of 13th when the scores had been finalized. Not the AEC qualifying score I had hoped for, but we ended on our dressage score which is better than we’ve done the past two times out! Plus, this score not only gave us our final score needed to qualify for a GDCTA year-end award, but it also qualified us for the USEA Area III Championships coming up in June at Poplar Place Farm – yay!

The next morning, the River Birch Farm team got up at 6am to feed, strip stalls, and pack up. I pulled out of the farm around 8:30am and drove the 6.5 hours home, swung by my house to drop off my bags, then headed over to Beaumont Farm to unload JJ’s things and await his arrival. About an hour later, Lauren delivered him safely and he came home to a perfectly clean, deeply bedded stall with tons of fresh hay and water and he looked just as thrilled as I was to be back.

I really shouldn’t practice my dressage test the night before… JJ remembers and tries to “help” which is sweet but not really helpful at all!