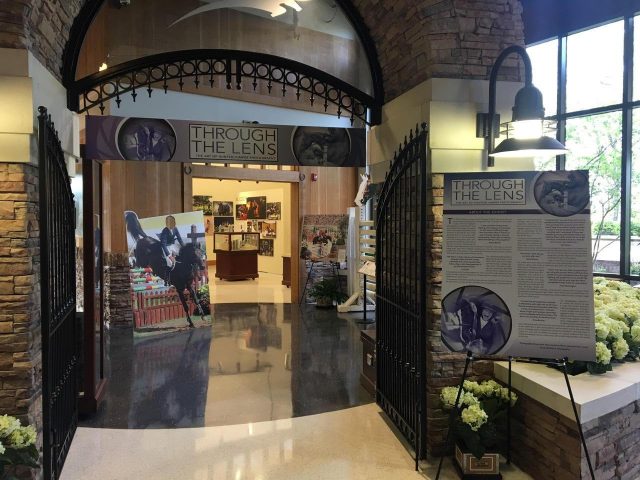 The Wheeler Museum at the USHJA headquarters has debuted a new exhibit honoring the evolution of horse show photography from its earliest days to modern trends. Noelle Maxwell catches up with curator Denise Quirk for a behind-the-scenes look. 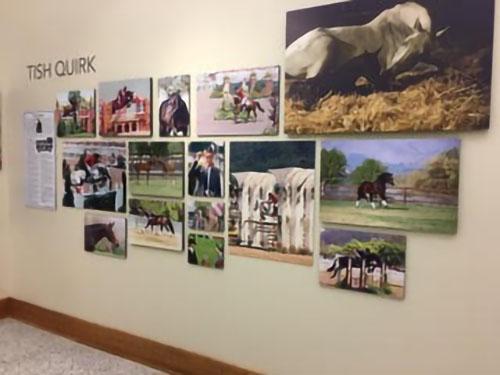 The Wheeler Museum, located in the USHJA office at the Kentucky Horse Park in Lexington, KY, recently debuted a new exhibit highlighting horse show photography. “Through the Lens” features photos by Budd Studio, Tish Quirk, Katey Barrett, Tricia Booker, Inez Pennington, Phyllis Pennington, Randi Muster, Shawn McMillen Photography, Al Cook, and many more. According to curator Denise Quirk, the exhibit also includes items that are permanently on display at the museum, and there are plans to add works by currently active photographers, along with interactive displays. We interviewed Quirk to learn more. 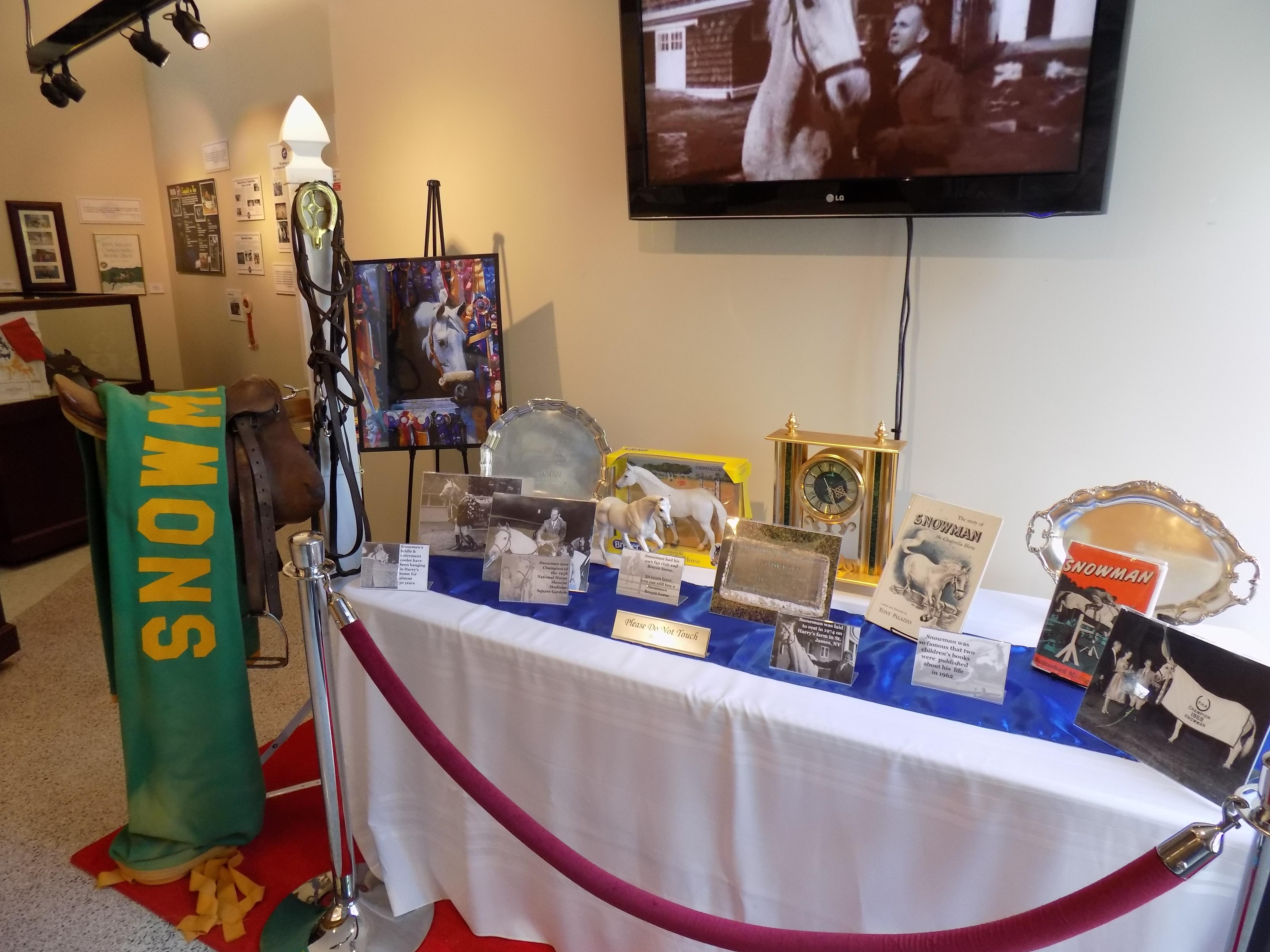 Horse Nation: Who are some the more noteworthy, well-known photographers featured in the exhibit?

Quirk: Each photographer will be known by some segment of the hunter/jumper world – most likely determined by when and where people attended shows or read equine publications. Tish Quirk is likely the most well-known for her iconic images of Greg Best and Gem Twist at the 1988 Seoul Olympics, the 1984 Olympic gold team, individual medalists Joe Fargis and Touch of Class (gold), Conrad Homfeld and Abdullah (silver), Melanie Smith Taylor/Calypso, and Leslie Burr Howard/Albany, and her shots at the World Cup Finals. Tish Quirk and her husband published HORSES magazine in the 1980s and Tish did much of the photography.

Inez and Phyllis Pennington shot and sold their photos as Pennington Galleries from the late 1970s through the 1990s. They covered Devon, the Hampton Classic, Lake Placid, and several other big shows along the east coast. Their shots were featured in several magazines: The Chronicle of the Horse, AHSA’S Horse Show, Practical Horseman, Grand Prix, Spur, etc. Exhibitors loved having a Pennington photo. Inez pioneered the “drop shot” (landing from the jump) and Phyllis the “gallop shot” (turning around the course and facing the camera) at a time when most wanted a classic shot at the top of the jump. The Penningtons only shot on film. 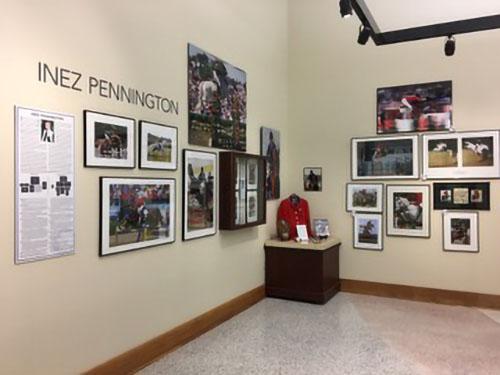 Budd Studio (Abraham “Budd” and Sid Waintrob) were the most famous photographers of the 1950s-1970s: Devon, the National at Madison Square Garden, Harrisburg, Washington, Lake Placid, all the long-gone big Long Island shows, plus Aachen and other European shows. They shot in black and white on film cameras and were also known for their photos of visual artists. Katey Barrett is well-known in California for her horse show photos from the 1970s and 1980s, and also her Thoroughbred racing photos. She’s famous for using the mirror lens, which gives an unusual background effect.

Tricia Booker was an editor, writer, and photographer at The Chronicle of the Horse for over 20 years and is currently editor of USHJA’s In Stride, shooting horse shows around the world for stories; she has a lifelong passion for photography. She still covers horse shows but has more opportunities now to shoot candid and “artsy” shots. Al Cook, Shawn McMillen, and Randi Muster were among the first digital horse show photographers and are still active on the show scene. The exhibit also features a few representative photos by the masters, James Leslie Parker, Karl Leck, and Marshall Hawkins.

The exhibit’s special feature is that photographers were invited to choose the included photos. Some chose famous horses, riders, or events (often the winner), others chose photos with a special story behind them of capturing the shot or of a surprising outcome (especially when working with film because photographers didn’t know if the shot worked out until it was developed) or because the photographers were experimenting with their technique or looking beyond capturing shots they were “expected” to catch as they documented the shows. 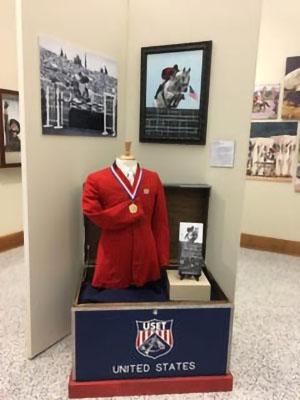 Quirk: With everyone able to take pictures these days, the exhibit showcases the artistry of professional equestrian photographers and the role they’ve played as visual historians of the hunter/jumper sport. The work of show photographers is pivotal to preserving and promoting our sport. For horse people and those not familiar with horse shows, as well as those interested in photography, having the photographers tell their own stories about their careers and approach to shooting at horse shows gives visitors a unique window into the sport and a “you are there” quality to the experience.

The exhibit offers current photographers examples of the tradition of shows that they’re part of, along with the unique view each photographer brings to the tradition. For those who’ve never used film, a sense of both what moments can be caught on film and the equipment used for those shots given the constraints of film camerawork and developing processes. Digital photography has its own constraints, and many current horse shows have gotten so big that photographers’ access may be limited in ways different from the past, so it might be interesting for them to compare experiences.

The USHJA Wheeler Museum is open weekdays from 8:30 AM to 5 PM. For more information visit them online here or contact curator Denise Quirk at [email protected]