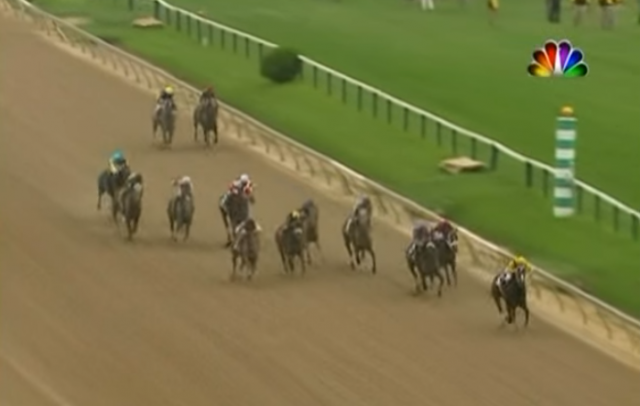 Happy Preakness Week! Get fired up by watching one of our all-time favorite Preakness performances: 2009, when filly Rachel Alexandra beat the boys and led wire-to-wire.

2009 was already shaping up to be a year of upsets: one of the longest of long shots to win the Kentucky Derby, Mine That Bird at 50-1 had picked his way from last to first to burst under the wire in the lead, shocking everyone who had doubted that the gelding based in New Mexico could be a serious Derby contender.

Mine That Bird was back in action for the Preakness, but jockey Calvin Borel, who had piloted the gelding to his incredible ground-saving trip that allowed him to steal the Derby, opted to go back to his regular ride: the superstar filly of 2009, Rachel Alexandra.

The day before the Derby, the Medaglia d’Oro daughter had smashed the Kentucky Oaks field by 20 lengths, and her connections had their sights on an even bigger prize: testing her against the colts in the Preakness Stakes.

Right out of the gate, Rachel Alexandra challenged for the lead, and while she was pushed wide into the first turn, she held on over Big Drama. Cruising easily into the backstretch, Rachel Alexandra led the field, but nearing the turn, Mine That Bird began to roll.

It appeared that lightning might in fact strike twice — blocked by the field at the top of the stretch, Mine That Bird nonetheless picked his way through yet again and in a brilliant burst of speed made his move…. but he was too late to catch Rachel Alexandra, the superstar filly, who continued to power her way to the water.

Rachel Alexandra would go on to win more races against colts, including the Haskell and the Woodward, and retired to broodmare for the 2011 season. After serious foaling complications, she was retired from breeding duties and is living happily at Stonestreet Farm.