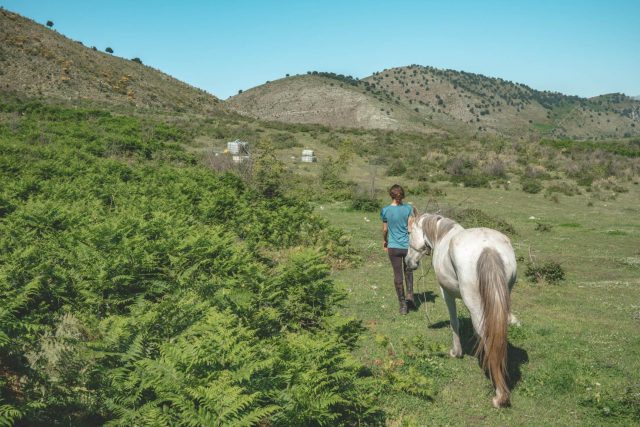 Safe, sound, sane and ridden at least once: Ashley and Quentin are navigating the difficulties of horse-trading, horse training and horse-trekking while preparing their 600km trek across Albania. 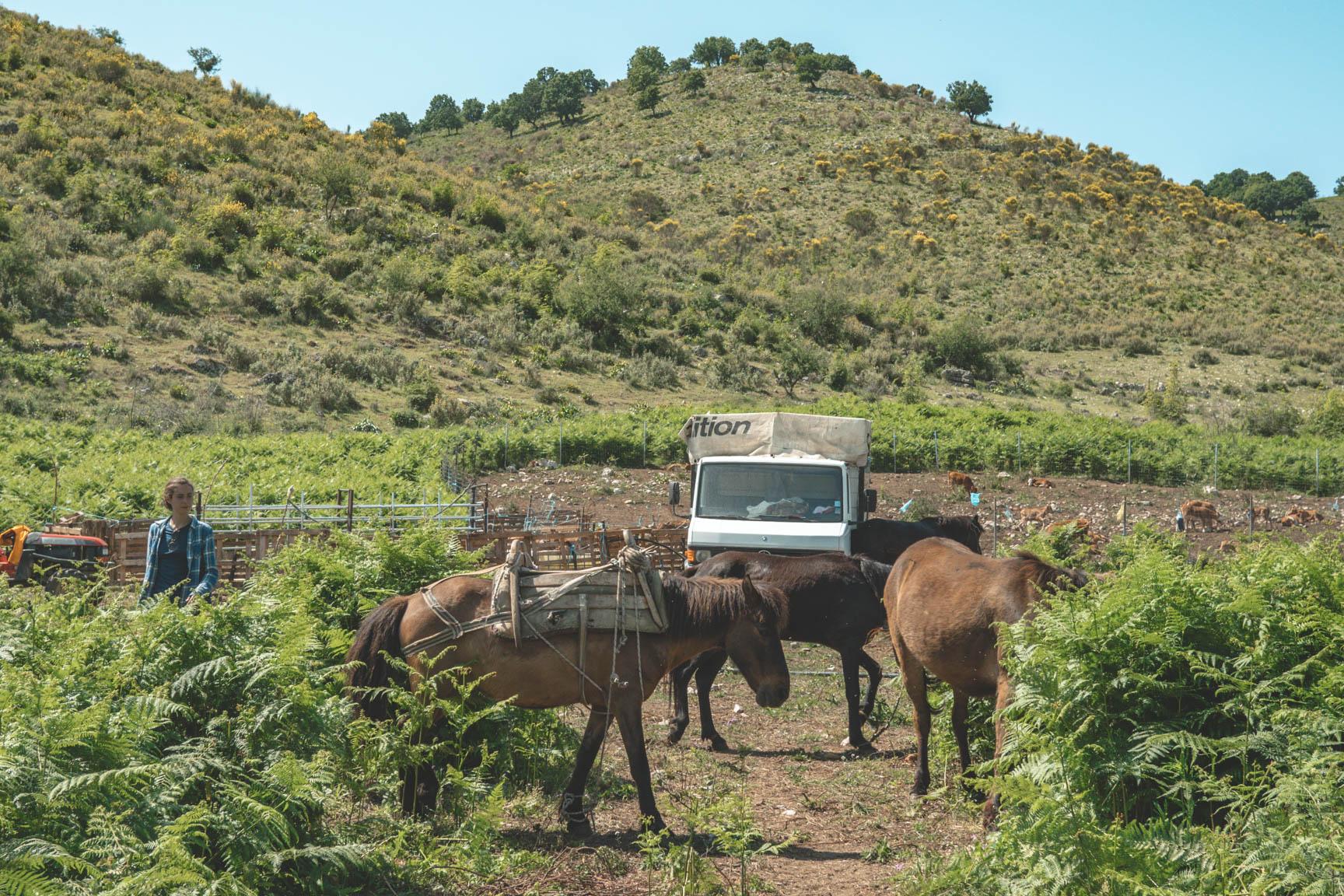 “This is exactly what we’re not supposed to be doing!”

Quentin shouted to me, over the clanging of cowbells, the barking of dogs and the cries of, “Hetz! Hetz!” by the Albanian shepherds milling around us.

Quentin accepted the reins and swung up for the first time onto the dancing grey mare. Bareback. Once he settled in, off they marched, melting into the herd of animals and people descending down the hillside. I was seated similarly on the flashy black mare I had fallen in love with yesterday, but was having less luck. Each time I encouraged the mare forward, I felt her muscles contract; the threat to buck or spin was communicated loud and clear. As the first raindrops began to fall, I got down to lead her by hand, not wanting to risk a broken bone before the trek even began. My feet hit the ground and the mare spun and reared facing me, striking at my chest with her front legs. Then she did it again.

“How are we ever going to ride to Tropoje if we can’t even find safe horses?” I mumbled desperately to myself. 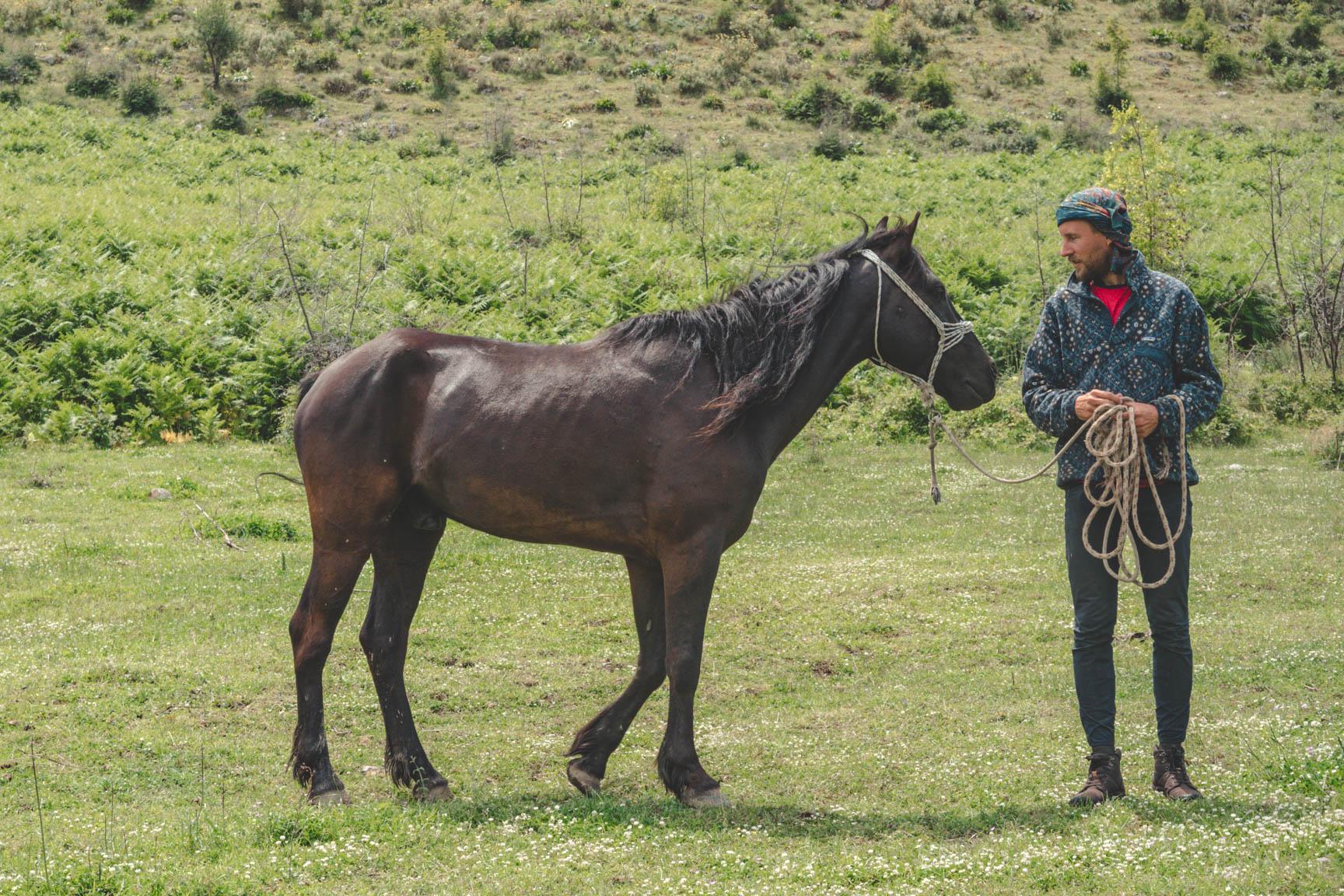 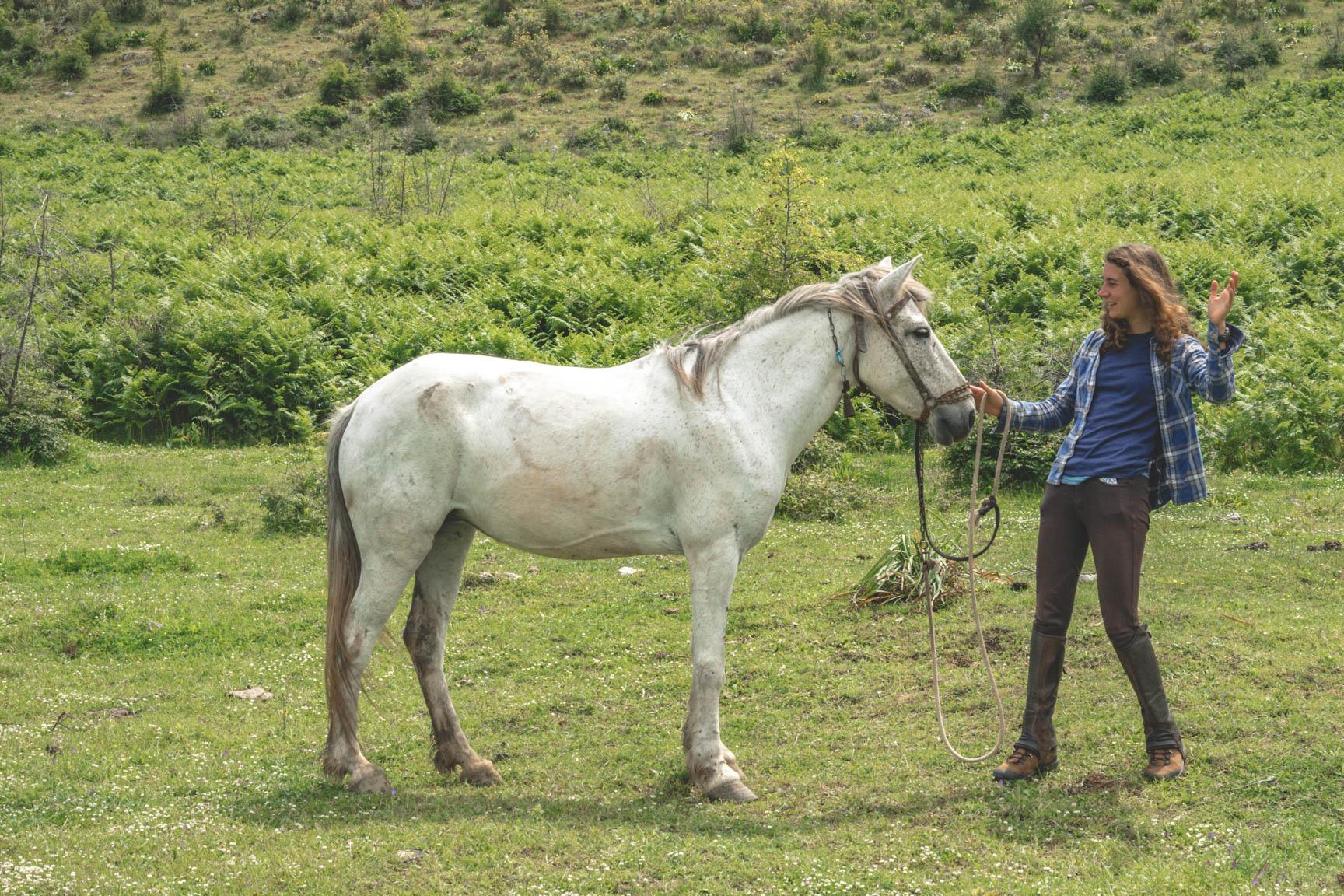 All over the world we try to get their ears up! Photo by En Selle

If you missed our introduction to Horse Nation, in which we explain who we are and why we’re crazy enough to trek across Albania by ourselves and three horses, you can check it out here. We’re loosely following the route traveled by Lord Byron, Edith Durham, and most recently, Robin Hanbury-Tension and his wife Louella. It will take us through Inner Albania, through the most rural and secluded parts of this wild country.

Over the past two weeks we’ve been searching for three unicorns to trek with us 600 km from Gjirokaster, in the south of Albania, to Bajrim Curri, in the north. Initially this search was just in the area around Gjirokaster. We quickly learned that while horses are frequently used for work here, they are not really used for riding and almost never ridden with English tack. The truth hit us hard: we were trying to organize a horse trek in a country with almost no riding culture.

The first prospective horses we saw were half-wild, underweight and wormy, with turned in toes and four-month old shoes still clinging to their hooves. But their biggest flaw was they were all not more than 12 hands at their tallest, and very narrow. Not exactly suitable for six-foot tall Quentin.

Visiting another pair, we were pleased to see they were the right size and weren’t underweight. They had fat over their hindquarters, over their backs, over their necks… in fact, they were mostly fat. They had been inside the stable since September. When we asked their owners to get on and show us how they moved, the two horse traders balked, playing a game of, “You do it.” “No, you do it.” with each other. Eventually they mustered up the courage and as we watched, we were wary but pleased. When it came to prices, we quickly found out they wanted an astronomical price for the horses, given their condition and training. Thank you, next.

The day was not ideal. Gradually the rain grew steadily harder. Twenty minutes later we were riding in a downpour and as we rounded a corner we were faced with a swinging wooden bridge, the engorged river rushing beneath. Johnny and I were tucked up behind the lead pony. He followed willingly, balking a bit as the other horses clambered onto the bridge, the swinging vibrations from weight of five marching horses seemingly making him sea-sick.

This is when I finally noticed the lead pony. Not more than 13 hands, he was being ridden side-saddle in the traditional Albanian pack-saddle, a wooden contraption that sits high up the horses neck and straps behind their flanks. He trotted down the lane, leading all of us, without a care in the world.

“If this pony has no major problems, he is coming with us to Tropoje.”

That’s how we got Düldül, the twelve year old pack pony, who has seen it all and is only somewhat grumpy about it. 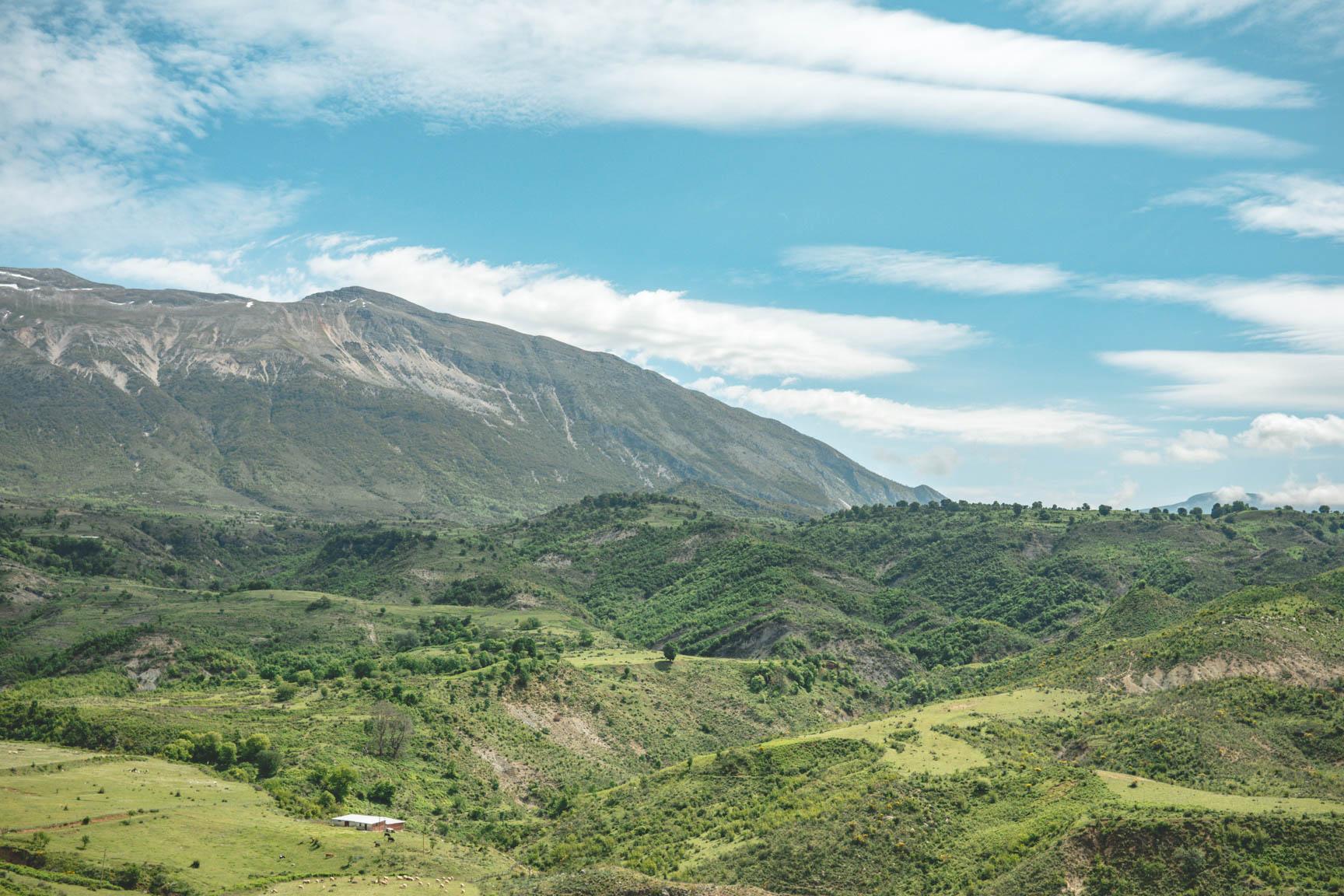 Our homebase for the next two weeks – we’ll be riding all over this mountainside to get the team in shape. Photo by En Selle

Vet checks, customs and getting in shape!

We agreed on a price for the three horses and did our own vet check. The standard vet check here consists of a dental, heart and respiration check. I upped the bets and did several lameness checks for good measure. Everyone passed with flying colors.

Our next challenge was to get our equipment out of airport prison. Seven hours from when we arrived at the Tirana cargo airport, we left with our sixty-pound box of gear. To avoid paying taxes on our personal affairs, we had to apply for a 90-day import visa. After much bureaucracy and a twenty-three euro bank transfer for reasons we still don’t understand, our box was free to enter Albania for three months. Inside was our pack saddle and all its trappings, some pads, a bridle, a selection of bits and other various equipment.

Now all that is left is to get in shape!

In the next episode, we’ll be out on the trail! You can expect to find us in the park Fir of Hotovë-Dangelli near Permet, bathing in the hot springs and cooking over a campfire. Between now and then we’re hoping to find a way to keep our escape artist, Griva, from leaving every night. Will she gallop back to the Greek border? Stay tuned.