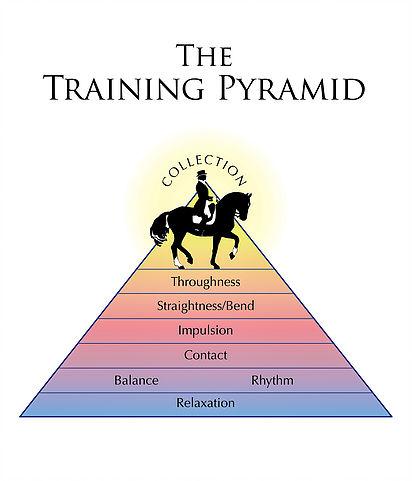 Collection and the crown chakra.

The seventh chakra is the crown chakra. This chakra is found at the very top (crown) of one’s head. The crown chakra represents our individual connection to the universe.

The crown chakra, relative to riding, is where each horse, and each rider, and each horse-rider team, develop their unique and individual way of going.

The training pyramid speaks of “collection;” physically speaking, collection is where the horse is developed enough (through consistent schooling up the levels in the pyramid) he can literally carry his weight on the hind end. Typically, horses carry 60-70% of their weight on the forehand. This is why it takes careful, consistent training to help them strengthen the hind end (sometimes called their “motor”) so it can take on a larger load. Untrained, a horse’s primary point of balance is down the front legs. In other words, if you took an imaginary plumb line and dropped it through the horse’s spine to the ground at the place where the horse would support itself if three of its four legs were taken off the ground at a standstill, the plumb line would hang down the line of one foreleg. It would also be nearly perpendicular to the ground, most of the time, unless the horse was rearing or otherwise elevating the front end.

As the horse develops his “motor” he becomes more athletic. In other words, the horse is more connected, both longitudinally (i.e., tail to nose) and laterally (i.e., side to side). As his athleticism develops, that imaginary plumb line begins to move backwards, and, just as importantly, the angle of that imaginary line changes, too.

In a fully-developed horse who exhibits true collection, the plumb line moves all the way back to the loin/croup area and the angle changes dramatically, depending on the gait and level of collection. In piaffe, especially, one can see that imaginary plumb line transition to a much steeper angle, with the imaginary line being drawn from the highest point of the croup to the ground just in front of the horse’s nose as the horse’s head remains on or just ahead of vertical. Generally referred to as how much the horse “sits,” looking for this plumb line and change of angle is a true test between whether the horse is actually collected longitudinally, nose-to-tail, as opposed to the horse being taught to merely lift its legs in a synchronized pattern while the plumb line remains at the girth and the angle remains perpendicular to the ground.

In true collection, the “sit” denotes the horse’s strength in the rear and allows the front end to grow lighter and elevated; the head and neck, particularly, can be let go and a genuinely collected horse will remain “in frame,” longitudinally, with most of the animal’s weight on the rear. When the collected horse piaffes, forward travel stops and the horse “sits” in place; the front end is light and the croup is noticeably lowered as the hind end carries the majority of the horse’s weight.

In less-than-true collection (the synchronized footfall pattern yet without much, if any, “sit”) the appearance of collection is created, in part, by constricting the head and neck, which restrains the forward mindset of the horse and, in some instances (such as piaffe) the forward movement of the animal, as well. False collection results in the plumb line remaining at the girth line, while the horse has no “sit.” Instead, the legs move in the correct pattern yet there is little if any true collection longitudinally.

Collection relates to the seventh chakra in this way: integrity.

A horse trained to carry itself on its hindquarters is a strong, athletic, and powerful riding partner who can shift both speed and direction in a moment. Recalling that classical dressage began as a training regime to create mounts suitable to become war horses, one understands how valuable the truly collected horse can be.

Similarly, a rider who has developed her own character to the point she can withstand the flow of life and understands her role as an integral part of the universe becomes a human who lives her life with steadfast integrity. She utilizes that integrity to become the best possible rider for each horse she rides. She never compromises her integrity by taking shortcuts in the training or becoming aggressive with her horse. She understands her long-term goal and commits to that goal on a day-by-day, ride-by-ride basis.

And, with time and care, she develops both herself and her horse into a trusting and trusthworthy partnership.