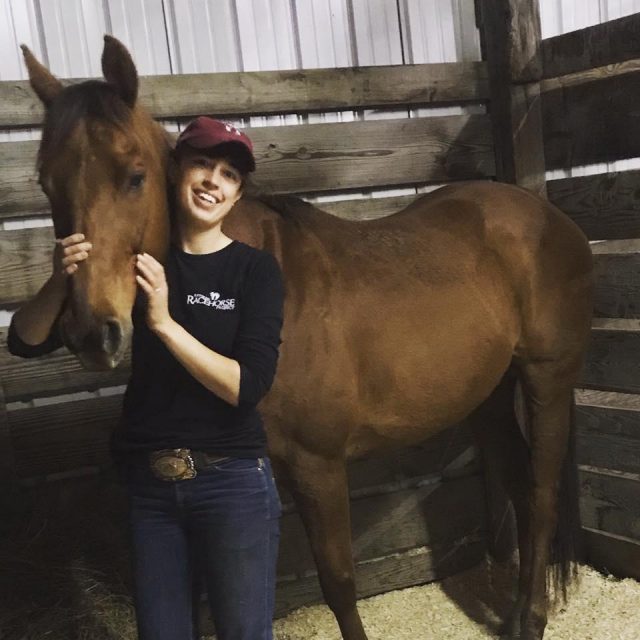 “The only way to get better is to surround yourself with better people.” 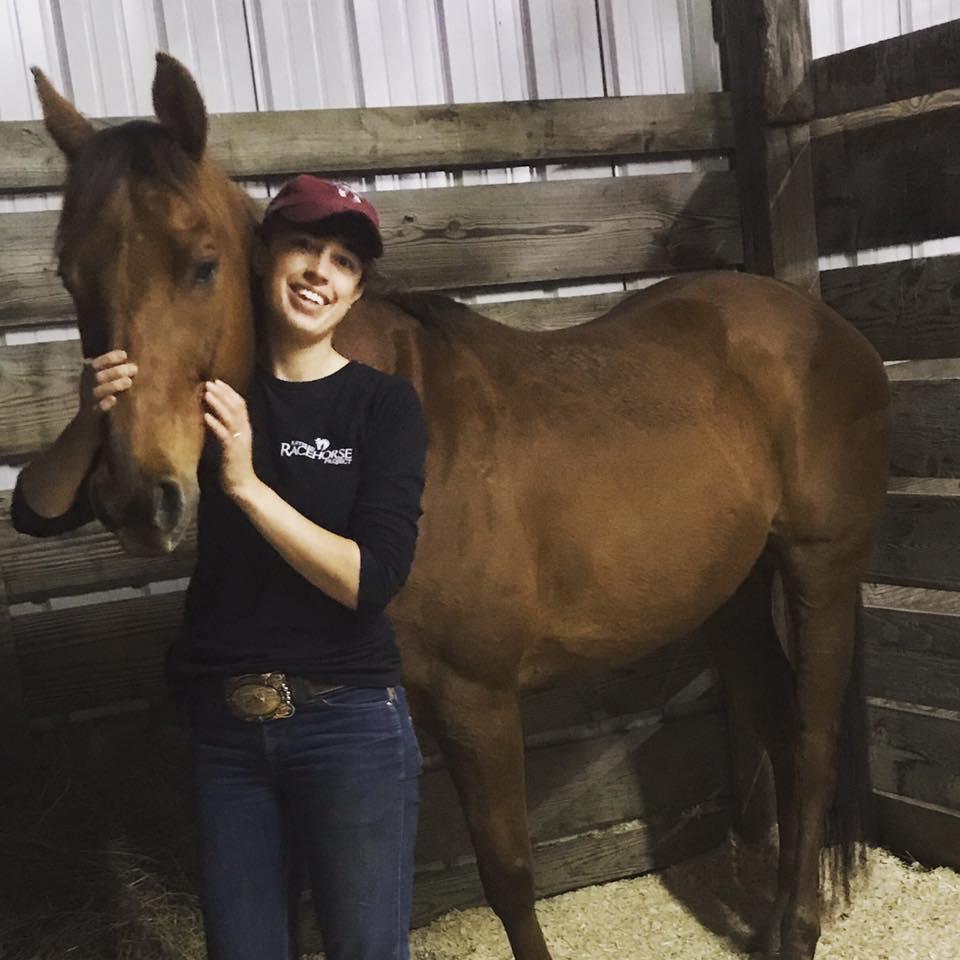 If we look tired, it’s because we are tired. Photo by Erik Bentley

There are hundreds of variations on the above quote, but the theory is the same: if you want to improve (in anything!), you have to hang out with those who will raise your game.

There are about a thousand motivational quotes that we can apply to the art of riding, training and showing (browse motivational horse Instagram and you’ll find all of them) including “the only rider you should strive to beat is the rider you were yesterday” or similar. After years of showing and summarily burning out on the show world, followed by a long hiatus and fairly triumphant return to the show ring last year for the Thoroughbred Makeover with my OTTB Jobber Bill, this second mantra was one I was trying to keep in mind as I made the long drive across New York last week with my husband Erik, our border collie Sage and Jobber in the back.

We were headed to the New York Reined Cow Horse Association first show weekend of the season, and it had been a long time since I had participated in the association. The NYRCHA was celebrating its tenth year, and I had been one of the charter members who had helped form the association all those years ago to bring the sport to the state in a more serious way. Reined cow horse appears deceptively easy to the casual observer (as does any discipline performed well): horse and rider perform a reining pattern, then work a lone cow, showing control at the short end of the ring (called boxing), then taking it down the fence for two turns, then circling the cow in each direction. It’s massively, punishingly difficult to do well.

With so many years off, I wondered how the association had grown, and likely changed. I knew there would be some good, well-broke horses there, but also probably some green ones, so hopefully we wouldn’t stand out too much. And hopefully Jobber would make himself a credit to his breed, and we wouldn’t find too many people laughing at the concept of taking an OTTB into this stock breed-dominated discipline — especially when it was so easy to acquire a purpose-bred horse that could be good at this sport.

Immediately upon arrival, I was reminded, however, that “blending in” was not going to be very easy: cow horses are short. The average height of horses at this show appeared to be about 14.3, and Jobber at 16.1 looked like a giant looming among them. The show coordinator took one look at Jobber — who admittedly, as far as Thoroughbreds go, isn’t necessarily super typey — and said “you’re gonna need a BIG stall.” There are worse fates.

I had planned to pay for a warm-up on Saturday morning before classes started, anticipating that it would be wise to get Jobber into the show pen by himself and then also to get him on a cow to get his confidence up and let him figure out the lay of the land: cattle run into the back of the ring via the outside holding pens, and I didn’t want that to be a huge shocker for him while being judged. We managed to drag our way through our first-ever intentional flying change (after dealing with some high-spirited running away all spring, I was happy to just lope a circle out in the cow pasture at home, let alone mess with lead changes) and then worked our cow with a bit of boxing and tracking.

I overheard someone in the bleachers say “you know, this Thoroughbred is pretty cool.” That was all I needed to hear to realize that while we weren’t going to be the most broke, the most flashy or the most effective pair in the ring that weekend, we would at least represent the off-track Thoroughbred gracefully.

As the weekend progressed, with many green horse moments, a few triumphs, and a few points and placings earned to start off our 2019 show season, I developed three major takeaways:

1. In some ways, I have a better horse than I think.

On Sunday morning, while loping with 15 of my new closest friends in about a third of the arena while the herd work was going on, I thought to myself oh my god, it’s happening — this was the smallest circle in an insane amount of traffic that we had ever loped before, and it was forcing me to actually sit, keep my eyes up and use my leg to help steer and stand Jobber up on his shoulders. And it was going well!

For too long, I’d been coddling myself and Jobber, using the “Thoroughbred with no arena” crutch to fool myself into thinking we had to make these giant, looping lope circles, using half the pasture and an airplane runway to waddle into our transition, afraid to sit up, close my leg and make it happen. Realizing I could, in fact, actually ride my horse is going to help us move forward in our training at home, and I’m looking forward to being better able to ride Jobber from behind into my hand and help him find his balance.

2. I am smart enough to observe, reflect, and change to effect positive changes in my horse.

This sounds kind of stupid to put into writing, but it’s literally taken me 30 years of life to get to this point, and if there’s one thing I’ve learned in writing for the internet it’s that if you’re thinking it about horses someone else is also thinking it too. So for the other random people out there who need to read this, yes — it’s taken me this long to get to the stage in my riding when I can think about how my ride went on Day One, reflect on what needs to change in my warm-up on Day Two, and enjoy some improvement… however minor.

Our herd work on Saturday was generally a super hot mess. Many thanks to my herd holders/turnback riders Jacob, Lauren, Joe and Mike for volunteering to help me flounder around: Jobber was initially very leery about marching right into a herd that all had their tails to him, which I’m totally willing to forgive for his first time ever tackling this tough class. In the words of my faithful husband, who nicely videoed every single one of my trips that weekend, “the good news is that you cut more cows than anyone else… the bad news is that it’s because you kept losing them.”

What was supposed to happen: horse and rider make a deep cut into the herd, single out a cow to cut, hold the cow and demonstrate cutting ability, repeat on ideally three cows total.

Jobber loves to chase cattle and get sucked into that parabola of shooting around behind them rather than yielding off the leg, giving ground and taking the straight trip across the pen to cut the cow off and hold it away from the herd. I thought about this ride all Saturday afternoon, and on Sunday morning, I spent less time loping (he’s a consistent horse; he doesn’t get hot on the cattle like his cutting-bred Quarter horse cousins) and more time in slow lateral work.

Our Sunday trip was still a super hot mess, and Jobber was spending more time turning on his forehand and throwing his body around the turn than sitting and rolling back, but look closely — with plenty of help again from my wonderful herd holders to keep the cow out of the herd, he’s making marginally straighter trips, yielding off of my leg, letting me guide him just a little bit more. It’s a subtle improvement, but to me, it felt monumental.

3. “The only way to get better is to surround yourself with better people.”

I spent a lot of time watching this weekend: watching other competitors perform, watching how others were warming up their horses, watching how other horses were responding to the bit or to the leg. I’ve probably never watched another set of horses this critically before, but I’ve never been quite so observant either, so curious as to how to get my horse from the greenbean he is now to one of these beautifully-broke, intuitive cow-turning machines. I think the intuition is there for sure — Jobber loves to romp around with cattle. The beautifully-broke part? We have a long road ahead of us.

And while we were generally at the bottom of most of our classes, there’s no better way to bring ourselves up: we don’t get better by being the biggest fish at the little pond of the local schooling show, after all. If I want to improve, I have to dive head-first into this world and surround ourselves with the best-broke horses in this corner of the country, learn as much as I can, and work to bring myself and my horse up to that level.

But it’s not just the level of the riding: the culture at the NYRCHA show was welcoming and overwhelmingly positive. I reconnected with friends and former students that I hadn’t ridden with in years. Strangers — now fellow competitors — came up to me to say “I heard your horse is a Thoroughbred? He’s so cute! He’s so cool!” I had anticipated lots of questions as to why I was even attempting this… instead, I was met with nothing but support and encouragement, comments that he was already improving and compliments that he was taking to this reined cow horse thing really well.

That’s the kind of positivity that we should always enjoy in the show pen: a community of folks all coming together to tackle this addictive, challenging, beautiful, impossible discipline, knowing that it really takes a village to make it happen. While I have plenty of homework to tackle before the next one, I can hardly wait to go back.