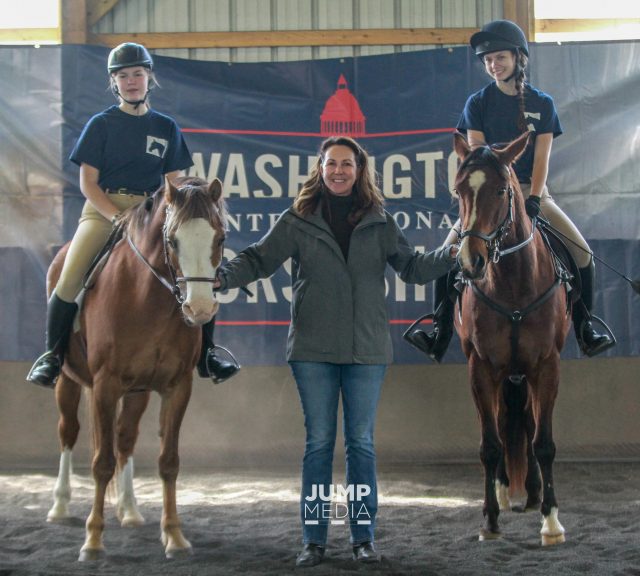 “Horses don’t know the difference between right and wrong, so we have to give them very clear corrections and rewards to teach them what’s right,” Madden advised the IBHPC riders. “That’s why we don’t ever pat them when they’ve made a mistake. Correct them when they misbehave and pat them when they do it correctly. Horses need definite, precise boundaries.”

The 11 IBHPC riders, who ranged in age from seven to 16 and in ability from walk-trot to jumping three feet, won the clinic with their entry into the video contest during the 2018 WIHS Barn Night. The riders usually focus on dressage, show jumping, and eventing in their lessons and competition, but top hunter, jumper and equitation trainer Madden’s firm focus on the basics gave all the riders tools to take home and use.

“This is a gift for us,” said Theresa Riley, the mother of D2 Pony Clubber Ella Riley, who rode in the clinic. “We don’t always have the opportunity to have such high-caliber trainers for the children. This is something that’s very valuable for them; hopefully they take what they’ve learned here and carry it on.

“The girls have been so excited. Everybody made sure their ponies were nice and clean. They polished their boots and cleaned their tack. It’s great to see the girls come together as a team and be excited about participating in something like this together. I think it helps build the team perspective for them as well,” Riley continued. Riders like Metou Liker on Flicka worked on pace, rhythm, and straightness over rails in their clinic with Stacia Klein Madden. Photo by Jump Media

Some of the exercises Madden used in teaching the IBHPC riders about how to control their horse’s pace and track were:

Halting in a straight line after a jump instead of continuing through the turn. Madden asked riders in every group except the walk-trot riders to stop their horses before turning. It helped the horses and ponies stop anticipating the turn and cutting in and got the riders to be proactive about creating what Madden calls the “recovery strides” after a jump that set you up for the next jump.

“I really liked the way she had us stop after the jumps. I’d never done that before, and I think it really worked well,” said D3 Pony Clubber Charlotte Milner, who rode Rocky in the clinic. “Rocky was definitely calmer toward the end. He started to calm down going down the lines because I think he knew we were going to stop after the jump and not go around the corner. I’ll definitely practice halting after the jump. It helped relax him a lot.” Charlie Atkinson worked on straightness while jumping on Emmie. Photo by Jump Media

The three-second rule for transitions. Penelope Roesler had only been riding Fleetwood Mac for a short time before the clinic after transitioning from a pony, so she was a bit cautious. Fleetwood Mac was sluggish off the leg aids. Madden taught Roesler how to use the crop behind her leg to reinforce the leg aid and increase Fleetwood Mac’s sensitivity to the leg.

Roesler had trouble getting Fleetwood Mac to canter promptly from the walk without a number of trot steps, so Madden instituted the “three-second rule” for transitions, calling out a new gait then counting aloud to three to encourage Roesler to get a prompt transition. The improvement in Fleetwood Mac’s responsiveness was dramatic, and by the end of her session, Roesler was cantering a small course on him. “I think Penelope had a huge confidence boost,” said Penelope’s mother, Carrie Roesler. “Two weeks ago, she was barely cantering on him, even though she’d been jumping big jumps on her pony. I think the transition was very frustrating for her, so this has been a huge confidence builder for her. When Stacia said, ‘You’re going to jump all these jumps and canter to them,’ I saw her eyes widen. But I think she needed that push, and I think she’s taking home a lot of confidence. Stacia being very direct with her is exactly what she needed.”

Not allowing repeated disobediences. Charlie Atkinson had a good ride in her session on the pony Emmie, but the chestnut mare had a habit of rooting the reins in a quick motion, pulling Atkinson out of the tack. “Don’t let her do that!” Madden said.

Madden showed Atkinson how to quickly set her hands to prevent the rooting as well as teaching her the proper timing for the correction. “When you feel her neck tense and her head go up a bit, get ready, because that’s what she does before she roots down,” Madden advised Atkinson. By the end of the session, Atkinson had a feel for the timing and correction, and Emmie had stopped rooting at the reins both while moving and in downward transitions.

“I learned how to make Emmie stop rooting and flipping her head,” said Atkinson. “That’s something she does really often, and now I feel like I have something I can do to stop her from doing it. It was really exciting for me [to ride with Stacia]. I was very happy when I heard that I could ride in this clinic. I like that she was very organized. She didn’t let us get off-track and she kept us moving forward.”

Madden’s main message for the IBHPC riders was that they needed to make sure their horses were attentive to their aids and respecting the boundaries set for them. It’s a message that carries over to every level Madden teaches. “The basics are the same, whether you’re teaching somebody to be on a horse for the first time, or whether you’re trying to win a national championship. It’s just levels and degrees of what you’re trying to fine-tune,” Madden said. “It’s really refreshing to teach at this level because you can see the kids get it so fast. They’re like sponges, and they take in the knowledge so fast. You can see the improvement so much faster. When you’re trying to work on that one or two percent of improvement, you don’t get to see the results so dramatically. It’s very gratifying!” Madden continued.

“We’ve definitely seen the girls progress even in the limited time Stacia had with them, from picking up the canter in three seconds to keeping their eyes up over the jumps,” said Riley. “A lot of it was reinforcing some of the things they’ve learned, but they also learned a lot of new tips and tricks to become stronger riders.”

The Washington International Horse Show Barn Night Clinic is a part of WIHS Barn Night’s prizes for local equestrian groups. Established in 1958, the Washington International Horse Show is one of North America’s most prestigious and entertaining equestrian events, attracting more than 26,000 spectators annually to Washington, D.C., for Olympic-level competition plus community and charity events. Find out more, including information on the Barn Night contests, at WIHS.org. BarnManager is a cloud-based software solution that provides horse owners and managers with the tools they need to streamline and simplify their daily management responsibilities. Find out more about BarnManager and get a free demo at BarnManager.com.