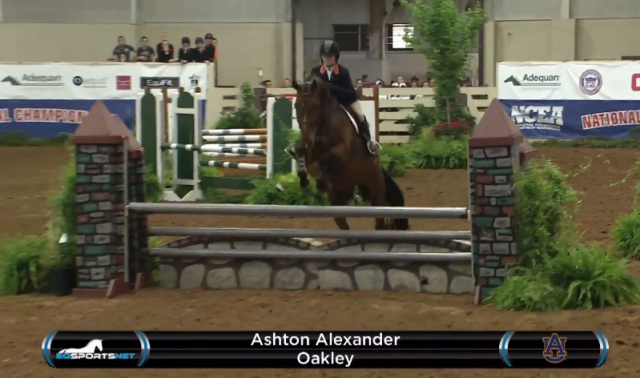 The National Collegiate Equestrian Association Team National Championship came down to one ride: watch Ashton Alexander win it for Auburn University aboard Oakley!

The National Collegiate Equestrian Association (NCEA) held its National Championships last weekend in Waco Texas, with a bracket of eight teams facing off: four riders in each discipline from each team competed head-to-head to settle the tournament, competing in hunt seat equitation on the flat and over fences, plus western reining and horsemanship.

The national team championship came down to the final ride: Auburn University faced off against University of Georgia, and ultimately it was Ashton Alexander’s ride aboard Oakley that let Auburn carry the day:

Nice catch ride! In NCEA format, riders compete on the same horses in a catch-ride format, set up to test the true horsemanship of each rider.