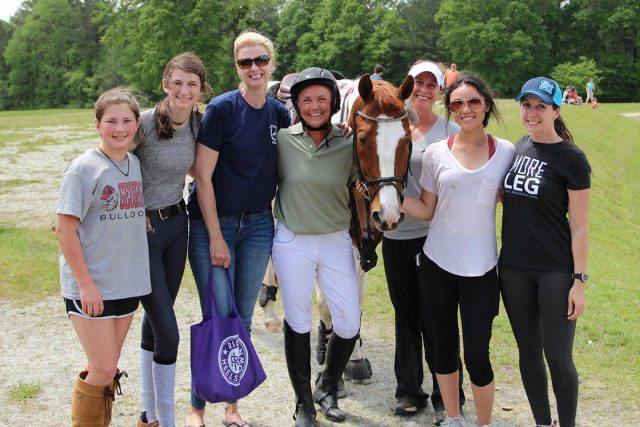 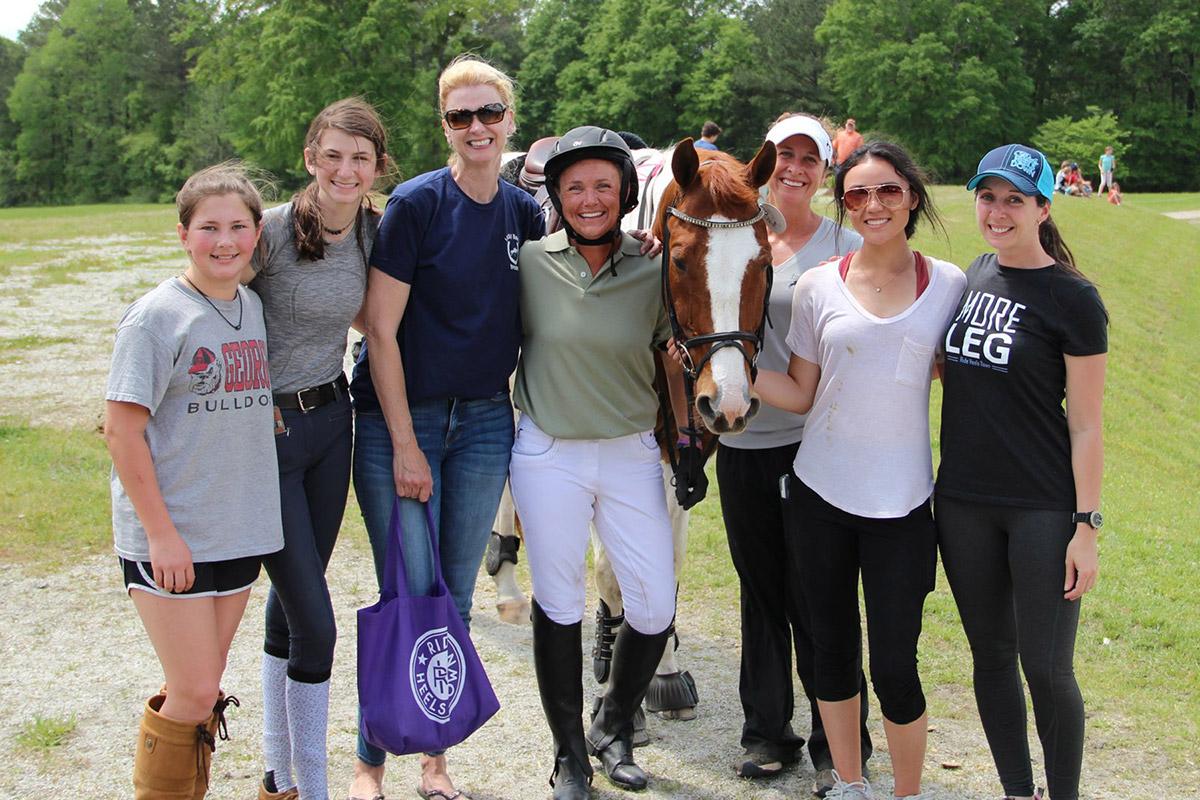 After watching us have a particularly fun jump lesson back in October, Susan Shu, one of the barn moms at Beaumont Farm, approached me with a surprising (and incredibly flattering) question: she wanted to know if she could ride JJ in Poplar Place Farm‘s next “Seasoned and Sexy Amoeba Challenge”.

Of course, my immediate response was to say “hell yes!!” which was promptly followed by me saying “he might not kill you…” Incredibly, Susan wasn’t put off by that comment.

The next question for us was to figure out how we were going to make it happen. With the initial excitement of her idea and my agreement still pumping through our veins, we started planning.

Susan is in her 40s and, other than sitting on a horse that follows the butt in front of it on trail, had never ridden. Her daughter is an eventer, though, so she’s comfortable around horses and knew how to do the basics like grooming, tacking, handling, and even trailering. I would have the honor of teaching her to ride, and JJ would have the honor of behaving. Mostly.

Truth be told, I was a little apprehensive about Susan’s first lesson because JJ threw a shoe and came up lame the week before. Her inaugural ride fell on one of the first cold, windy days of October and I was hoping that we wouldn’t have a 1,200 pound kite to wrestle after his seven days of stall rest.

Trying to be proactive (and safe) I lunged him for a couple minutes first to see what we were working with, and he seemed A-okay. So, Susan stepped up and hopped on, and after a few minutes of JJ’s famous “let’s do this!!” walk, he realized that the theme of the day’s ride was to do as little as possible and he immediately ratcheted things down several notches.

Forty-five minutes later, Susan had worked through lots of balance exercises, including practicing her two point, and had even started learning to post the trot. I knew it was exhausting, I knew it hurt, and we both knew she would be sore as hell, but she had a huge smile on her face the entire time. I was proud of her amazing attitude and at how quickly she picked things up.

Meanwhile, JJ treated Susan as if she were a Fabergé egg and would stop any time he felt her get off balance. She nicknamed him “Saint JJ” and that meant more to me than anything else she could have said. 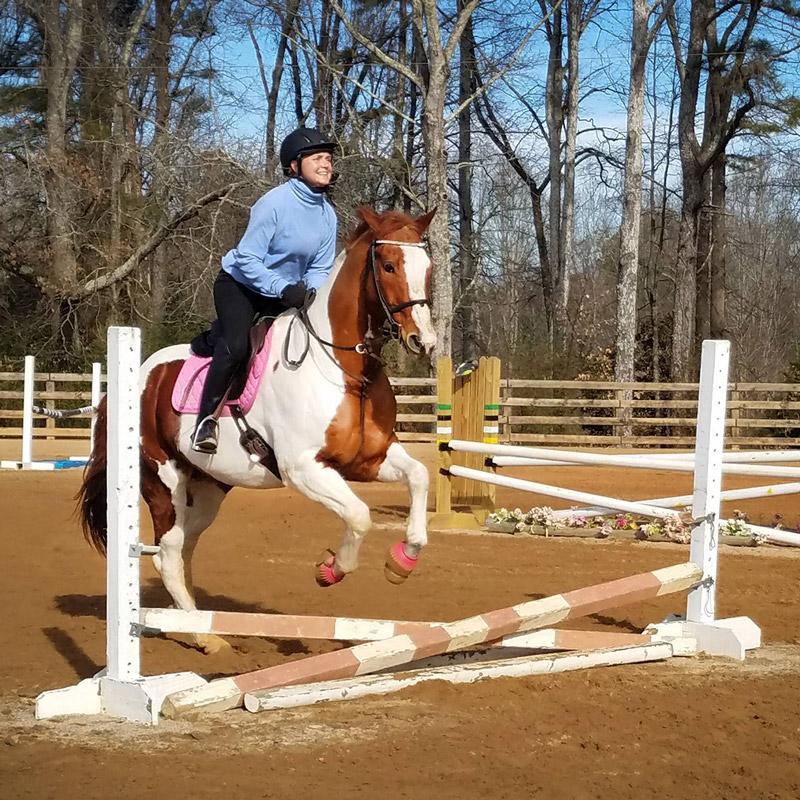 Susan’s first cross rail – look at how perfect her position is, and that big smile! (Photo by Ainsley Jacobs / Ride Heels Down)

We both knew we had a lot of work ahead of us to prepare Susan for her big eventing debut in April of 2019, but she was fully committed and went all in. She rode religiously over the winter, through awful weather, freezing temperatures, and torturous rides. Susan NEVER said “no” to anything I asked of her, no matter how hard, scary, or painful.

She showed up early for every lesson, had JJ immaculately prepared each time, and always was sure to bring some treats to reward him with at the end of her ride.

She was an absolute inspiration and a joy to teach – Susan was excited to learn and improved tremendously over the course of five months.

As the big day got closer, we enlisted the help of Lauren Turner of River Birch Farm for a little extra coaching and even took a trip to Ashland Farm for a cross country schooling session. It took a few minutes for Susan to trust that JJ wouldn’t take off at a break-neck gallop, but she quickly got the hang of things and was even trotting down banks by the end of the day – wow!!

Finally, it was time for Susan to make her big eventing debut! She was the first student I had taught since my instructor days 18 years ago, so as much as I hated to “pass the buck” after getting her so far, I knew it was in her best interest to have a real professional coach on her special day. Lauren was out of town wedding dress shopping for the weekend (congrats, Lauren and Chase!!) so our friend Doreen Sullivan Durr of Free Form Farm happily volunteered to do the honors. Problem was, Doreen was at a (different) wedding the Friday before the event, so it was all on me to get Susan through practicing her cross country course… uh oh.

I won’t spill the beans just yet on how the pre-show schooling (or the show itself) went, because I don’t want to steal Susan’s thunder, but I can say I was beyond proud of her and her attitude. Many others would have quit a thousand times along the way, but Susan never questioned her goal and was determined to make it through.

Through this entire process, I was constantly impressed by JJ and how good he was for Susan. For my little horse who was once deemed “dangerous and unrideable” to be capable of bringing up a total beginner shows me just how amazing he truly is, and how wonderful his heart is.

I’ll let Susan tell all about her experience of going “from observer to eventer” in her very own blog post HERE! 🙂

Inspiration can be found at every level of eventing, from Amoeba to Advanced. Also, I have the best horse in the history of the world.
…but we already knew that.