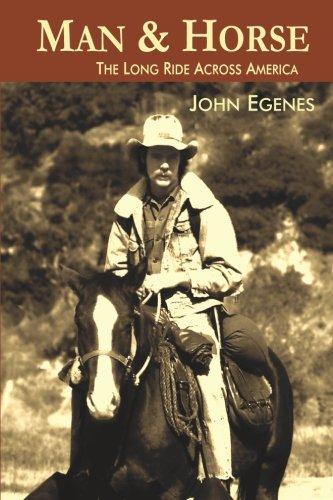 Man & Horse: The Long Ride Across America is the tale of a man traveling from California to Virginia on horseback in 1974. This book is surprisingly good, yet doesn’t meet its full potential.

At the beginning, we’re introduced to John Egenes, author and man who rode across America, 24 years old in 1974, and his horse, Gizmo, a four-year-old registered Quarter Horse. Along the way, we learn about Egenes’s background (self-described non-conformist, briefly in the Navy, didn’t finish college, grew up poor in a single parent household, spent his teens hitchhiking around California). We learn how he’d been planning to do a ride like this for a while, just because he wanted to, and we’re treated to a detailed explanation about how Egenes planned the journey. He’d mapped it all out using several US Geological Survey maps dated 1957. We also learn Egenes previously attempted this journey with Gizmo’s dam and a pack mule, but that they were unsuccessful.

From there, we encounter several stories — some sad, some entertaining — from the time Egenes was bitten by a black widow spider that’d crawled into his sleeping bag (he was so sick he had to tie Gizmo’s reins to his wrist and walk on foot to a ghost town; he fortunately ran into a retired nurse who got him to a doctor), to the time he unwittingly flashed a train full of passengers while taking a bath in a river next to what he’d thought were some seldom-used train tracks, to the time he shot a rattlesnake and cooked it for breakfast, to two occasions where Gizmo was nearly struck by lightning, to coming across a spooky abandoned settlement near the New Mexico-Texas border.

Another time, Egenes almost gets arrested in a small Arkansas town on charges of carrying an illegal firearm and creating a public nuisance until a woman from a town council intervenes and an angry mob who didn’t want Egenes arrested and didn’t like the mayor or police deputy had formed on the steps of the town hall; said town had a population of roughly 974 and Egenes had initially been warmly welcomed by the townsfolk. The mayor, per Egenes, had asked how much schooling Egenes had and when learning that he’d attended college briefly, had labeled Egenes a “high-falutin’ college graduate” and “fancy college kid protestor.”

We’re also introduced to the many colorful characters Egenes meets along the way, ranging from the aforementioned retired nurse who saved him from death by black widow venom, to a young 20-something couple in Texas who were already oil millionaires (Egenes ends up watching the Nixon resignation while staying in their mansion), to a man Egenes meets in Missouri who’d always wanted to move to Alaska (and does so with Egenes’s encouragement), and two men in Arkansas who lived in a cabin they’d built and made knives and muzzle-loader rifles and stockpiled Velveeta cheese to use as sauce on rabbit meat. These stories about the experiences and people along the way are what really makes this book shine, and unfortunately, there aren’t nearly enough and readers are left wanting more.

The book turns into a slog about a man and his horse riding alone through the desert. Egenes, despite the conversational style, seems to “tell” readers rather than “show” them, mentioning several times that he met many wonderful, kind, interesting people on the journey, but he rarely opens up and brings the stories to life. Twice, Egenes devotes an entire chapter to what I can only describe as “cranky old man rants.” One chapter ends up devoted to how people nowadays are glued to their phones, and another ends up devoted to Egenes’s opinion about media, where he writes, “news is only entertainment disguised as information,” and then rants about how he believes Watergate is where “the media began to abdicate its responsibilities and began altering the definition of news replacing information with entertainment […] even as it brought down a sitting president.”

Egenes consistently emphasizes that he did this ride pre-GPS and smartphones; mentioning this once is understandable for context, more than that is overkill. From a reader’s perspective, the opinionated rant chapters and constant emphasis on no technology leaves a bad taste in my mouth and ruins the book a little.

Ultimately, I wanted to like Man & Horse better than I did. The story has great potential but lacks execution. The narrative pacing is off, up to about page 100 it’s all a quick, faster-paced read, and somewhere around page 100 it turns into a slog when you notice that Egenes started in California, hasn’t made it to Texas, and has spent half the book talking about his background and the ride through the desert in excruciating detail. The final chapters, in comparison, feel rushed and slapdash, with not nearly the detail needed, and everything ends up feeling lacking.

Egenes also overexplains a lot, evidenced by the frequent mentions of no technology and the regularly pointed-out fact that horses can’t vomit, the two worst over-explanation offenders. These passages take up space that could’ve been better spent telling the story and it leaves me wondering who the author’s intended audience was, or if he even had one in mind. The book also greatly lacked polish: there are several spelling and grammatical errors sprinkled throughout, and while the conversational writing style is perfect, it frequently devolves into rambling and needs to be tightened up considerably.

Man & Horse truly isn’t a bad book, but it’d benefit from strong editing, better pacing, more stories about the events and people from the journey, and less about various excruciating details and miscellaneous info watered down for non-horsey readers.

Man & Horse: The Long Ride Across America is available via Amazon.