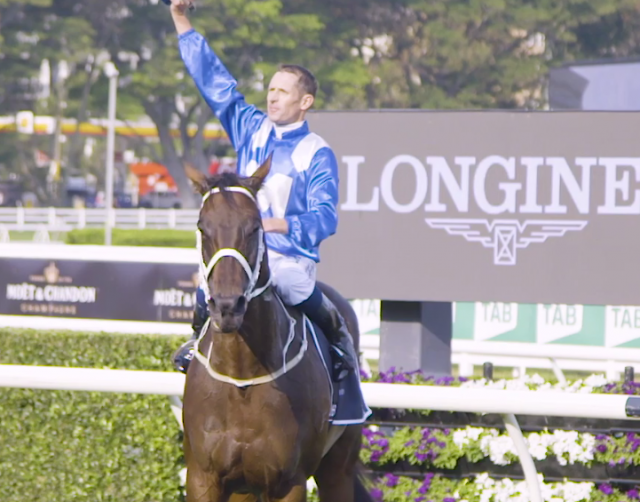 Winx retired on Saturday, April 13th after earning her 37th career win (33 consecutively) with over $26 million (AUS) in earnings. We take a look back at the mare’s career and her accomplishments, both stated and unstated.

Winx has earned so many unique titles and records that it’s challenging to keep track of them all, but on April 13, 2019, we closed this part of her story once and for all: with her 37th career win, and 33rd straight victory, Winx retired from racing after winning the Queen Elizabeth Stakes.

Seven and a half years ago, she was just a wobbly-legged foal like so many: born on September 14, 2011 at Coolmore Stud in Australia, the filly was bred by Fairway Thoroughbreds out of the Al Akbar mare Vegas Showgirl, sired by Street Cry. She sold as a yearling for $230,000 to Magic Bloodstock Racing, a partnership of Peter and Patty Tighe, Richard Treweeke and Debbie Kepitis.

Winx trialed twice, then won her two starts as a two-year-old. As a three-year-old, she suffered her only career losses, struggling a bit to grow into herself and her unique stride. Unlike many champion racehorses who average 12 strides every five, Winx takes about 14 strides every five seconds: this allows her to accelerate or settle easier than many horses, which is evident when watching replays of her races.

She did win four of her ten starts that year, and when she won the Group 3 Sunshine Coast Guineas, she would never lose again — despite facing just about every challenge possible, from poor starts to traffic and interference, varying turf conditions to high assigned weights, and even one memorable race in which jockey Hugh Bowman dropped his whip in the stretch. Her win in the 2016 Doncaster Mile earned her a rating of 126 from the International Federation of Horse Racing Authorities, tying her for first in the world on the World’s Best Racehorse ranking with California Chrome.

And she didn’t stop there. She kept racing and kept winning — she racked up 33 wins in a row through her seven-year-old season, including 25 Group 1 victories (a world record). She won the Cox Plate a record four times consecutively.

Winx did everything we wanted to see in a racehorse: she had a long and storied career, proving that some horses truly don’t hit their stride until they’re older. She proved her ability to run on varying distances. She proved she could run against colts and stallions and still leave them all in her dust.

Winx took us all on a wild ride, but it had to come to an end: nothing can truly last forever. All there’s left to do now is cherish the memories.