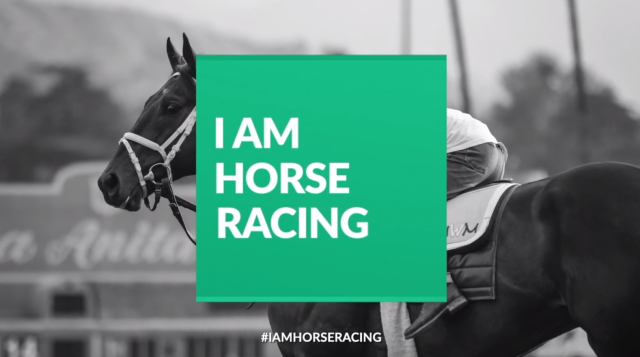 “We believe for too long the conversation has been driven by outside forces. We feel there’s an equally important story to be told, and that’s the one of tens of thousands who live, breathe and sleep horses. For them, this isn’t a job, it’s a way of life.”

Courtesy of I am Horse Racing

“We believe for too long the conversation has been driven by outside forces. We feel there’s an equally important story to be told, and that’s the one of tens of thousands who live, breathe and sleep horses. For them, this isn’t a job, it’s a way of life,” said Alexis Garske of I am Horse Racing.

I am Horse Racing is a new grassroots social media movement sweeping Twitter. Formed by women involved in Southern California racing, including TVG’s Christina Blacker, Britney Eurton and Anna James, Grand Slam Social co-founder Molly McGill, Jill Baffert, and Santa Anita Park’s Alexis Garske, I am Horse Racing aims to “expand the definition of what our industry is. To us, that specifically involves its personalities. There are many within the industry who aren’t well-known; each individual adores horses and does much to ensure their daily quality of life, general temperament, and overall health. That’s vital, true, and certainly not always the story being told.”

The movement began when Jill Baffert contacted other group members, wanting to throw ideas around; everyone’s interest was piqued as they each respect Baffert and what she does for racing. The group first met on March 18, sharing feelings and ideas; a morning meeting became a late lunch as everyone realized they were on the same page and could use their talents to help.

“Individually,” said Garske, “we weren’t feeling of service in the greater scheme. We were doing our jobs, which is contributing, but we felt ineffective in a larger sense. There’s much going on currently which has greatly affected us. That’s all we needed to take the first step.”

I am Horse Racing was off and running. It debuted on Twitter on March 23 and has over 3,000 followers. Their first video received 60,000+ views; subsequent videos exceeded 10,000 views. Said Garske, “It’s definitely surpassed our expectations! We felt there was an appetite for something like this in racing, and that so many worldwide have embraced the campaign is a testament to that desire. Our list [of stories] isn’t short and it grows by the minute.”

“Timing has played a big part” in I am Horse Racing’s success, per Garske, who added that I am Horse Racing was “absolutely” influenced by the situation at Santa Anita. “As an industry, we’re facing some serious challenges and have taken some hard knocks overall. There’s an overwhelming feeling that people want to have a say about who they are, what this industry is, and what it means to their lives and families. They’re passionate to show the world what goes on behind the scenes of this great sport, to show their truth.”

Garske further elaborated that “many within the industry have tried this type of idea before, or have wanted to do something similar. We’re not re-inventing the wheel here. What’s going on is palpable and we’re living in a different world right now. Good intentions are always present, always credible, but action is what was immediately necessary. So, in that regard, we’re making it work as best as we can, and working together seamlessly with tremendous communication has made this possible.”

I am Horse Racing isn’t funded and is “a labor of love,” said Garske. The main objective is sharing the stories which exist within the industry: “Think of us as just distributing information right now that involves personal stories and, hopefully soon, includes further educating the general public about racing, its jobs, and its care of the horses. Many have one or two notions about racing and the buck stops there; we’d like to expand that notion to include the thousands working in and beyond racing, who love horses and care for them. In this business, our equines come before ourselves, and I think everyone felt that was being forgotten.”

Besides reaching the public, the group observed that as the stories were released, each one brought the racing industry closer and reminded everyone just how big their circle is. Garske stated that was “a revelation,” adding, “I think any industry person who’s looked through our Twitter feed has learned something about someone they’ve known for years, without a doubt. If that’s not a reminder that we’re in this together and come from the same place of loving it and having a spark of passion ignite us, I don’t know what is.”

Garske believes racing needs this initiative, and that “while many want to do more, most don’t, can’t, don’t know how, or don’t have time. Genuine needs don’t wait until you’re ready, we’ve all felt the need for it. If you’re in racing in any respect, you’ve had countless discussions with friends and colleagues about what should be done, what’s not being done, a great idea, etc. We’re on the same page; we know sharing our story beyond our own walls is what’ll prove us ‘human’ in the public’s minds. That notion is imperative to sustaining and growing our industry. Horse racing is a community of hard-working, resilient people who’re passionate about what they do and have amazing stories to tell. How many people outside of racing do you know who pop out of bed at 3:30 AM to go to work – rain, cold, sleet, or shine? They do this for decades and wouldn’t have it any other way.

“We come from all walks of life, but there’s one thing binding us together: our love of the horse. We all have a story to tell about what brought us to love or work in this great sport. There’s nothing more empowering than sharing your truth in a manner where people can relate to it. It invites compassion, shows our humanity, and hopefully invites a greater curiosity and willingness to learn more.”

I am Horse Racing will continue releasing one story per day via email distribution and social media channels, with an eye to maximizing views and social media shelf life. They’re also planning to create a website allowing in-depth content to live and thrive. The hope is to expand into a database of what racing is. “There is,” said Garske, “certainly more to come from I am Horse Racing.”