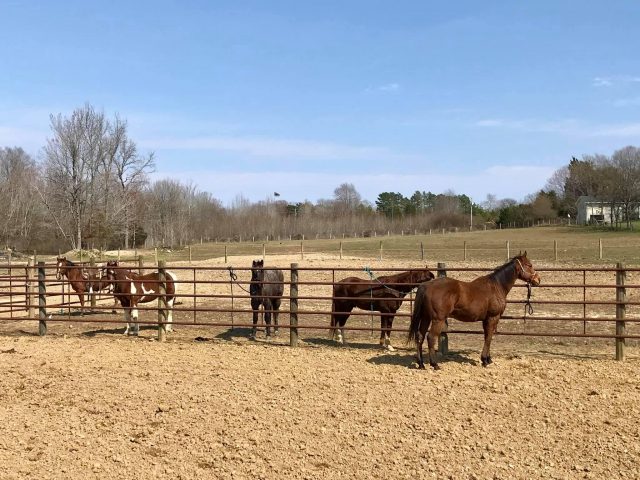 “There are many things that I may not be: I may not be the most talented, I may not have all the best resources, but what I do have is the best interest at heart for the horse. Sometimes that means another person gets the call to jockey. I really hope that I finally get the call for this horse named Awesome Choice.”

For 673 accepted trainers, the journey to the Retired Racehorse Project‘s 2019 Thoroughbred Makeover has begun! Over the training period, three of those trainers will blog their journeys, including their triumphs and their heartbreaks, successes and failures, for Horse Nation readers. Casey French continues her story. 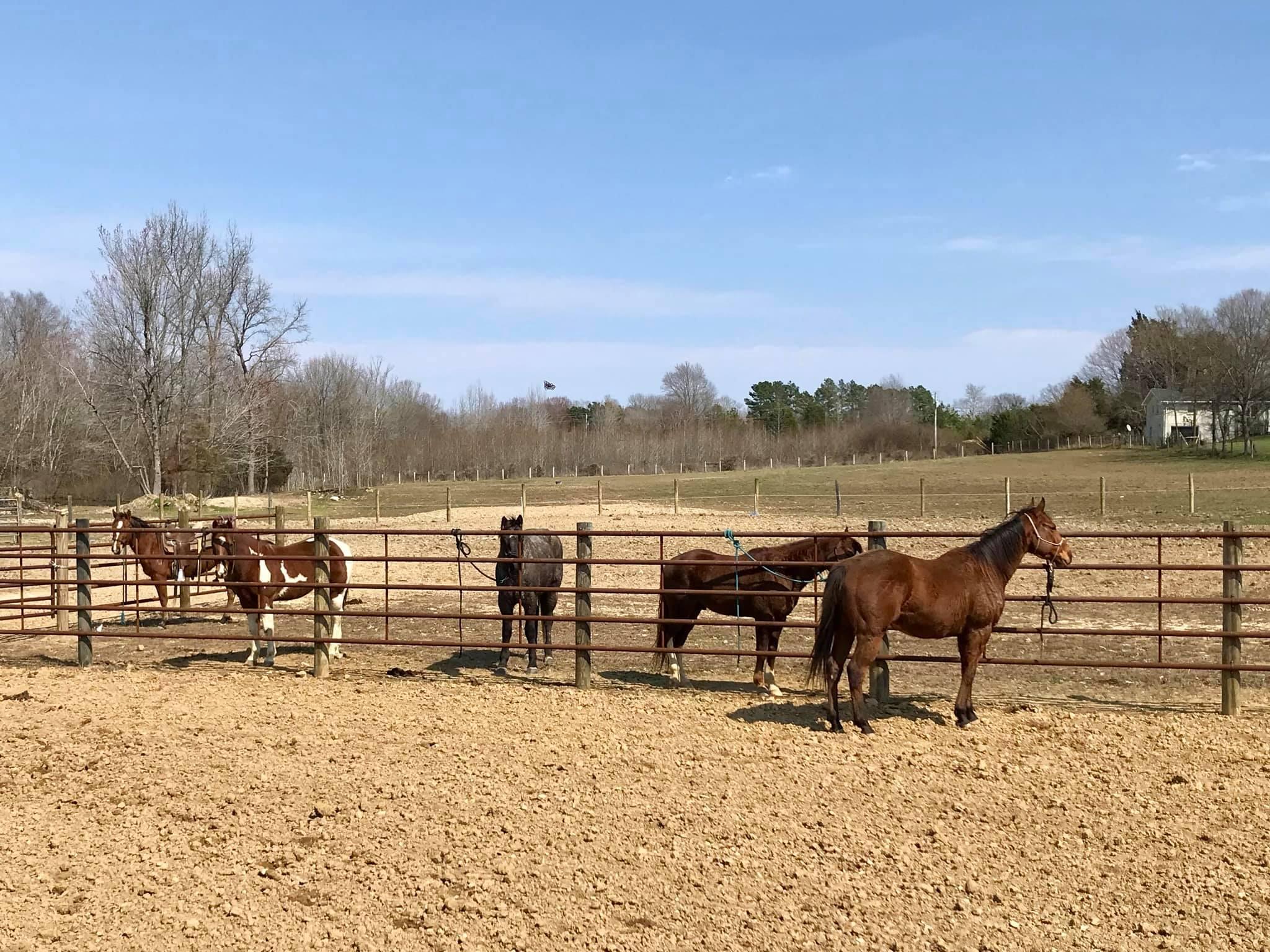 This was THE horse: “Awesome Choice,” a 2014 brown gelding, by Awesome Of Course out of Courtly Choice — Doneraile Court.

Convincing my husband, a dedicated team roper, to let me have a Thoroughbred to train for the Makeover was no easy task. I really wasn’t prepared for another horse myself when I stumbled upon this hopeful — I had taken in a few outside horses for training and barn space was limited. A plan was reached upon purchase that he would remain in Kentucky until my training obligations were fulfilled.

After a few short weeks we all took the trip from Nashville to Lexington, KY to pick up my sight-unseen Thoroughbred Makeover horse. I was a bit apprehensive about the purchase, and this was the day that I would see what I really got myself into. The last thing I wanted was to show up at the farm and find this horse be nothing like what I thought him to be.

When I finally got to meet him, all my doubts and fears instantly melted away. He was rough looking, but as they say, “the bones” were there. Prior to purchase, Awesome Choice had suffered a sesamoid fracture, which is what lead to the end of his racing career. When I picked him up, he had been turned out for over a year. (We narrowly made the racing deadline for this year’s Makeover.) I feel like this did a great deal for his mind and body, but in a sense, I am doing a makeover in every aspect of the game.

For three or four weeks, we acclimated him to our routines at the barn, introducing him to our feeding schedules and finding him a pasture mate. I needed to come up with a barn name and for some reason the name Alvin kept coming to mind. My grandfathers’ names were Alvin and Albert, so I thought about Al… but it soon morphed into something that I felt suited him best: “Alvie.” He gets along with every horse here thankfully! That was a huge blessing and made things go much more smoothly.

My plan during this period was to pony and lunge him to slowly prepare him for riding. I am not sure why I thought this, but I just assumed he would lunge just fine… come to find out, I was completely and utterly wrong. So wrong! He had zero idea of what I was asking him to do. Finally, I teamed up with another trainer who specializes more on ground work to help me with accomplishing this goal in a much more effective manner. For a few weeks we worked on ground work. I also ponied him, which went well other than working on some mouthiness. 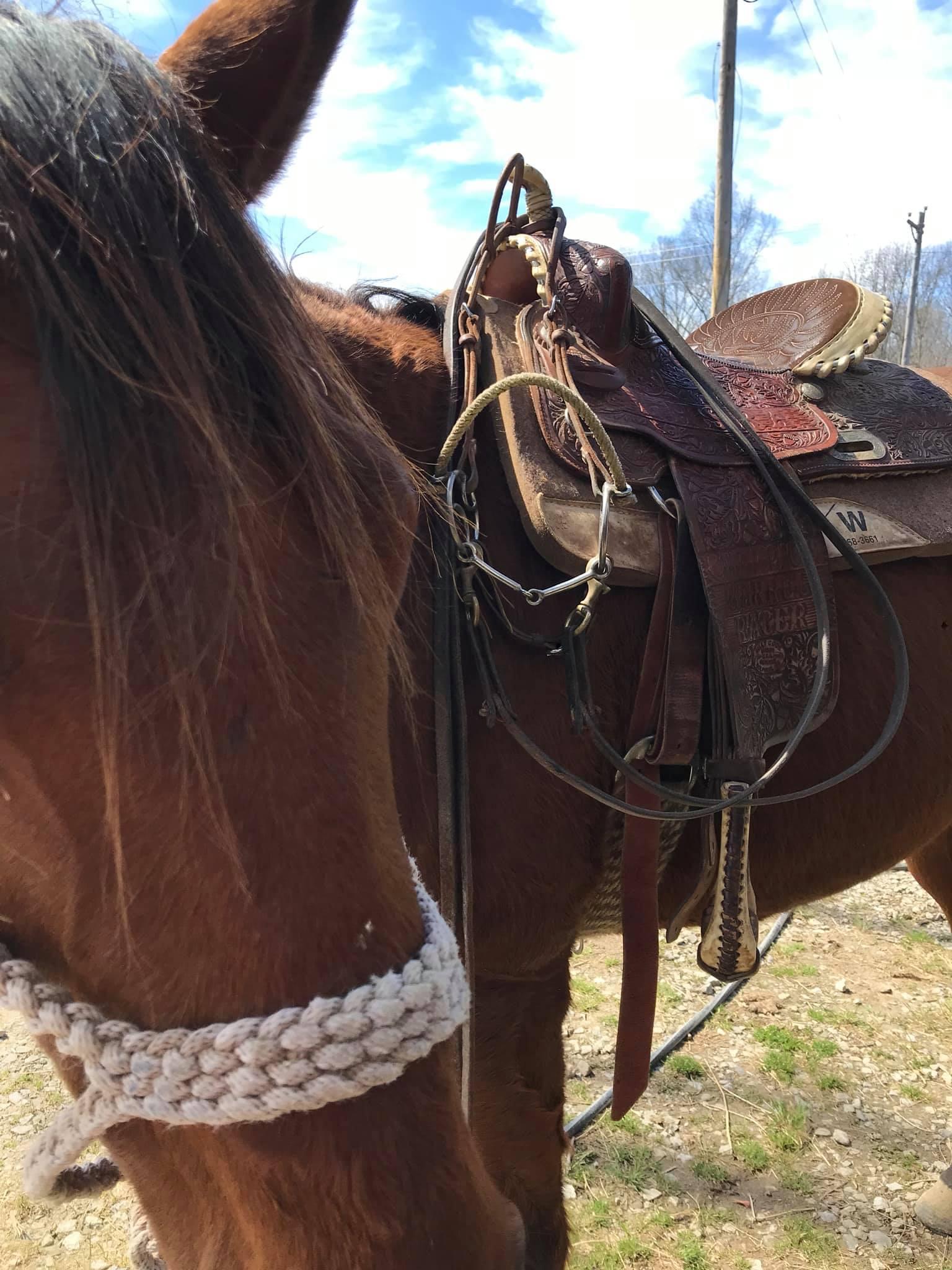 A few days after Christmas I thought he was ready for some light riding. I really had no idea what to expect: this horse hadn’t been ridden in over a year, and I had never seen anyone ride him either. My riding area is just a disced-up flat open space — no fences.  My plan was to get my husband on him first! I guilted him into taking the first ride — he had experience with galloping Thoroughbreds while he was younger, so I kept telling him he was a much better candidate than myself. I said “Here’s what we’ll do: I will saddle another horse and hook on to you with a lead, so you will have the reins and it will be just like we are ponying him. If anything happens, maybe I can help you that way.”

Much to my surprise while I was saddling “the pony horse,” he had already taken it upon himself to go ahead and hop on. Within the first few minutes he was jogging around, stopping, and riding around like a champ! Alvie was so calm — just another day at the office for him. My husband looked at me, jumped off and said “Well, I think you’re good.” I looked at him with a big smile and hopped on! Our first ride was amazing.

I mentioned in my previous blog that I’ve been on a hunt for my next superhorse — I am coming up on a decade of searching since finding my current mount. There have been several talented horses that have come in and out of our barn that have gone on to be winners — I sell the ones that I know might be best suited for someone other than myself. There are many things that I may not be: I may not be the most talented, I may not have all the best resources, but what I do have is the best interest at heart for the horse. Sometimes that means another person gets the call to jockey.

I really hope that I finally get the call for this horse named Awesome Choice.