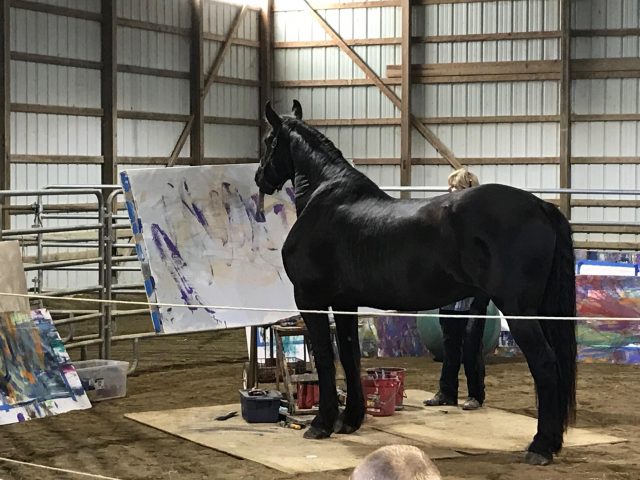 “Few artists can claim they started out scribbling in the dirt with a dressage whip; then again, most aren’t Justin, a 16-year-old Friesian gelding from Columbus, IN, who opted to showcase his talent in a different arena.” 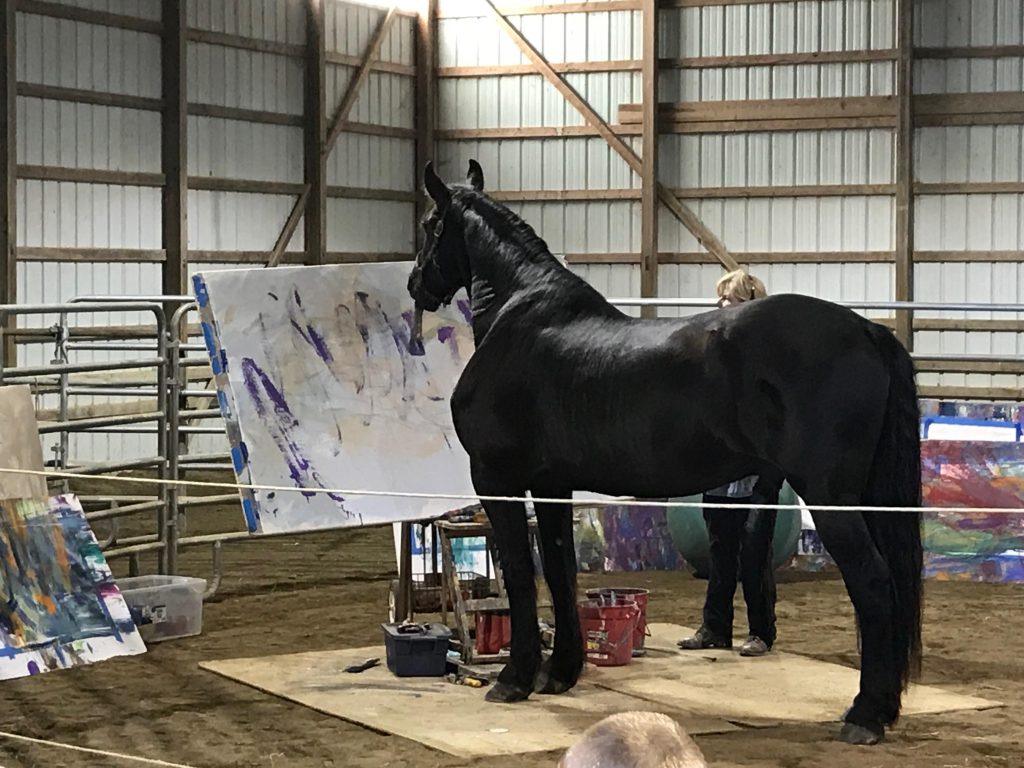 Few artists can claim they started out scribbling in the dirt with a dressage whip; then again, most aren’t Justin, a 16-year-old Friesian gelding from Columbus, IN, who opted to showcase his talent in a different arena. His work is best described as “Unbridled Abstract Expressionistic.” After Adonna Combs, Justin’s owner, noticed the scribbles resembled drawings, she began working with Justin’s desire to paint, using his natural instinct for foraging and transferring that instinct to holding a paintbrush in his mouth and painting a canvas on the ground.

As Justin’s work grew more popular, he began doing demonstrations and Combs trained him to paint on a specially-designed easel that would allow the audience to see what he was doing; Justin’s tools have all been modified with horses in mind, his brushes are bought at hardware stores and have handles wrapped in duct tape so he can hold them in his mouth.

Justin’s career really took off in 2012, after Combs, who holds a BFA in visual communications, realized that his work was too good not to share. She looked into an exhibit, contacting a gallery curator with the explanation that she was a contemporary abstract painter specializing in acrylics, but stating the paintings were “out there.” The curator said, “Oh, we’ve had ‘out there’ before,” and when Combs further explained that the paintings were done by a horse, the curator loved it. Since then, Justin’s work has wildly exceeded expectations: he’s performed in demonstrations, had work exhibited at several local venues, and his paintings have sold in the US and Canada. 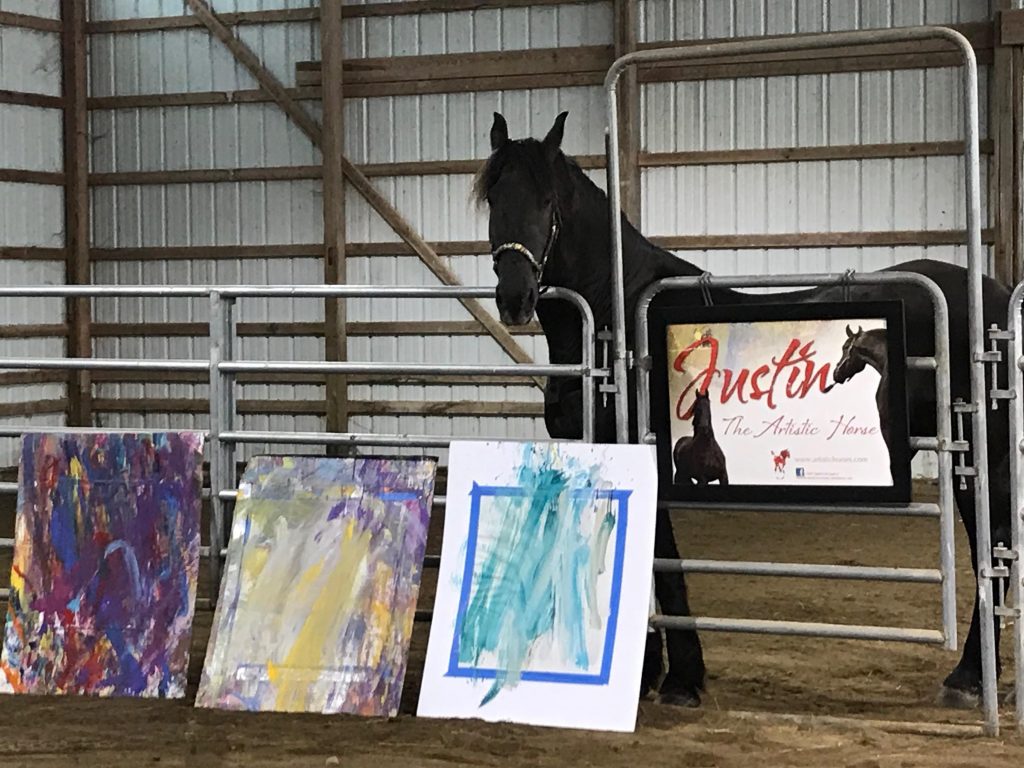 Typically, Justin only paints for a few minutes at a time, as Combs doesn’t want painting to become work for him. When not painting, Justin is either getting into mischief (he knows how to open his stall and is known for opening everyone’s stalls and letting his friends out; everything in the barn has to be “Justin-proofed”), doing liberty tricks such as playing “soccer,” or going for an occasional ride with Combs. His favorite colors are blue and orange; Combs believes he likes orange because of his love for carrots. His paintings are always “signed” with a hoofprint, and if you look closely, you can almost always see a horse in them! 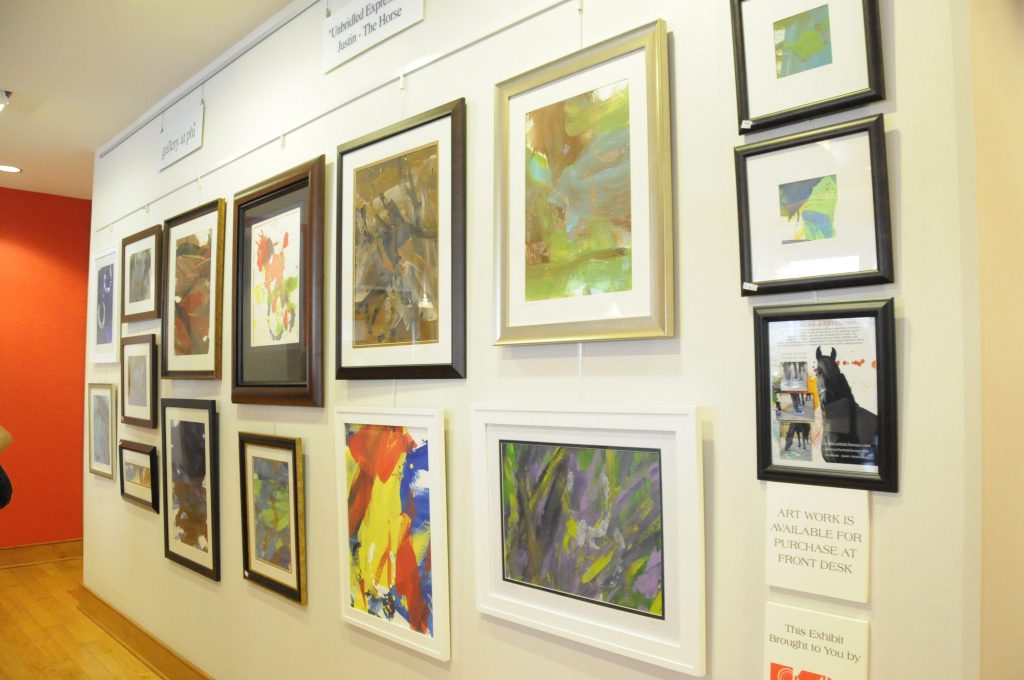 Justin and Combs collaborate on every piece, Combs selects the color palate, and Justin does the painting. According to Combs, the paintings generally don’t have a recognizable subject, but as the paintings evolve, Justin usually adds a spontaneous touch that improves the work in a way a human couldn’t have imagined. Recently, Justin and Combs have started working on a 4’x6’ piece; said Combs, “I take some of his pieces and add my touch by looking at the shapes he’s created and defining them into what I see in the paintings. I can always find an image or partial image of a horse. This is a new, exciting approach for us!” 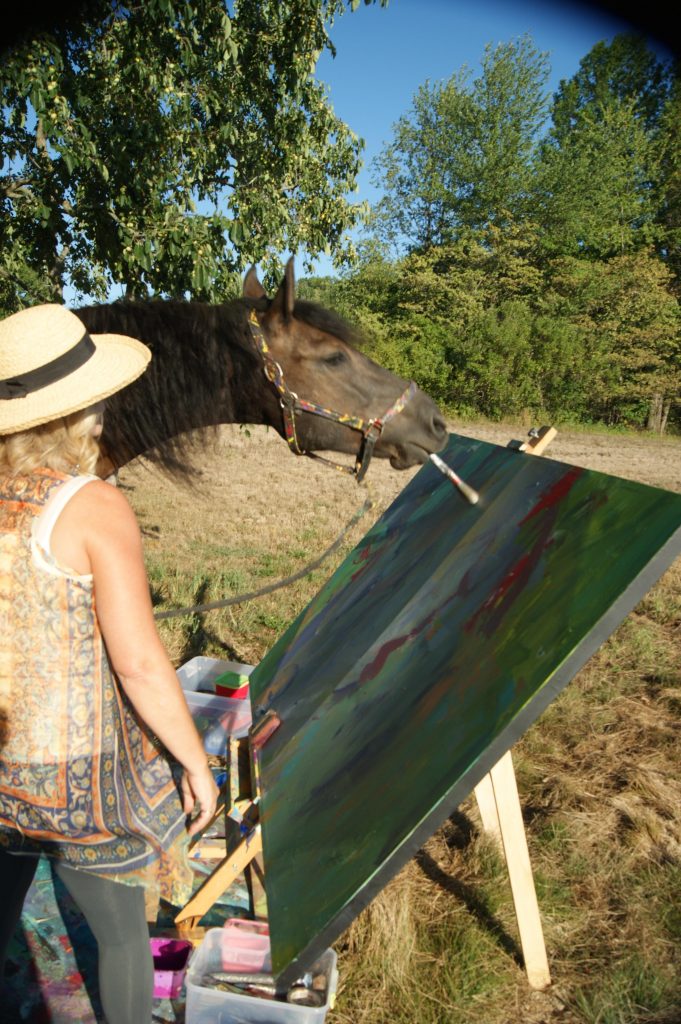 Justin’s studio is open by appointment for group tours and demonstrations. Justin and Combs also offer “Painting Experience” courses for groups of four or more, where people can come out, paint their own piece in a step-by-step workshop, and meet Justin. To schedule a tour or Painting Experience class, email Adonna Combs at: [email protected]. For further information, visit artistichorses.com.