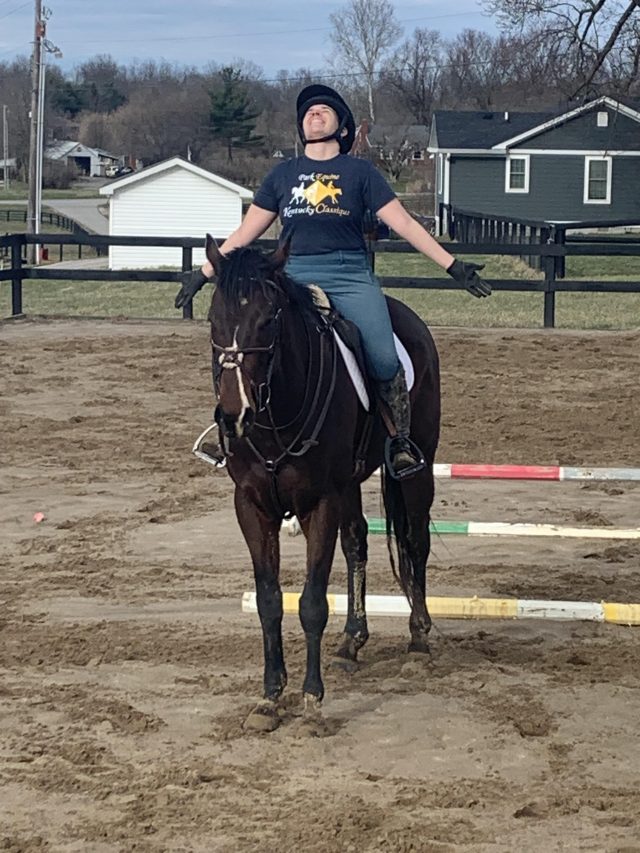 Singing in the LORD PLEASE MAKE IT STOP rain…

For 673 accepted trainers, the journey to the Retired Racehorse Project‘s 2019 Thoroughbred Makeover has begun! Over the next nine months, three of those trainers will blog their journeys, including their triumphs and their heartbreaks, successes and failures, for Horse Nation readers. Kristen Brennan is back today, telling the story about how she connected with her horse Geoffrey’s breeders and former owner. 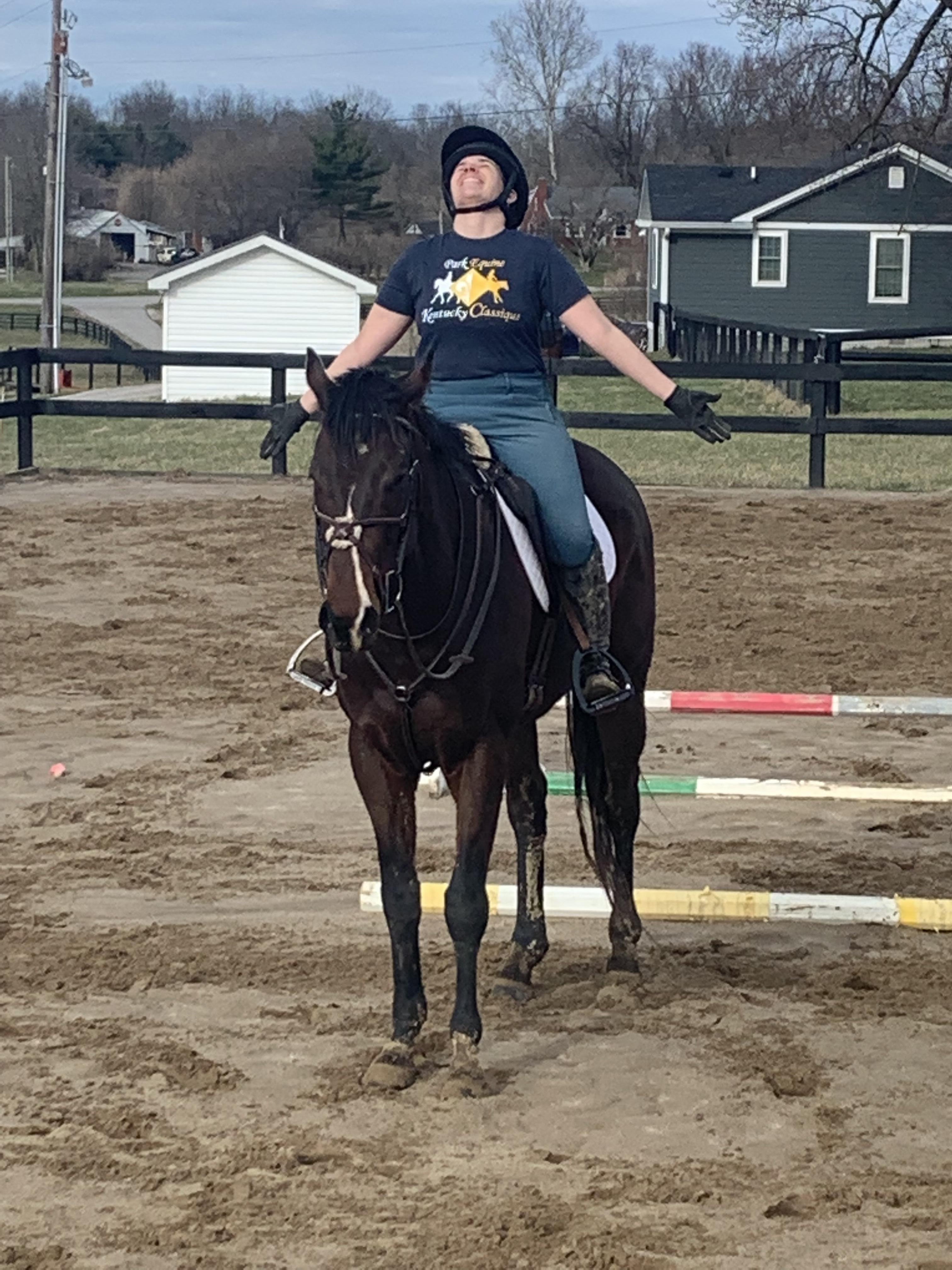 The first day in months where I didn’t think maybe I needed a kayak instead of horses. Geoffrey is obviously thrilled too. All photos courtesy of Kristen Brennan.

I don’t know about where you live, but here in Kentucky it’s been raining pretty much non-stop since this time last year. After the first few months of monsoons, I joked with my husband that maybe he should have used all of our scrap wood to make an ark rather than build cross country fences. But as I stand on our front porch and watch the creek running through our property rise, I’m starting to think that wouldn’t have been a bad idea.

It’s rained so much that I don’t remember what dry socks feel like and I’ve long raised my white flag in the battle against mud on my horses and most days, myself. I’ve stopped worrying about protecting our arena by closing it when its wet and I’ve gotten pretty darn good at riding through a “BUT I CAN’T WORK ITS RAINING AND I MIGHT MELT” tantrum. Sorry buddy, but if you wanted me to give you the day off because of weather, you shouldn’t have let me catch you in a downpour ignoring that pricey run-in shed we built you.

The upside to this never-ending rain is that its given both me and Geoffrey a lot of down time. For me, it’s been good to keep that little voice inside my head that tells me to ride with a goal (thank you type-A personality) in check. For Geoffrey, it’s given him time to learn all my other horses’ bad habits like how to properly shred a brand-new blanket and standing at the gate at 4 pm sharp and screaming until I bring him in (thank you Marcus). Every year I tell myself I’m going to be tough and I’m going to ride no matter what, but the truth is the days of me riding through heavy rain and in sub-zero temps were over as soon as I discovered red wine and fireplaces you can turn on with a switch.

One of the things that’s come out of this free time is that I was able to find out more about Geoffrey’s past. When I got him, I didn’t know much about him other than he was a three-year-old his trainer described as “super cool” that didn’t want to run any more. Over dinner one night a month or so later, the conversation as usual turned to horses (always to my soccer-loving husband’s dismay) and my friends started asking about Geoffrey’s race name (Ghost Rocket) and breeding (Ghostzapper x Lovely Daughter). Turns out two of them did vet work for the farm who bred him, and they knew the mare and worked on him as a foal.

So I sent his breeder, Mulhollad Springs, an email asking if they remembered him. They quickly responded, sending a photo and let me know he was a handsome foal, easy to raise and fun to be around and that they hoped he continued to bring me joy. That spurred more curiosity, so from there I found out he had sold at the 2016 Keeneland September sale for $130,000. Seemed like a lot of money for a horse so awkward he tripped himself walking into the hose in my barn, but what do I know? With five starts and $24,233 in earnings he was the high roller of my herd, beating the other two’s combined winnings of $157. 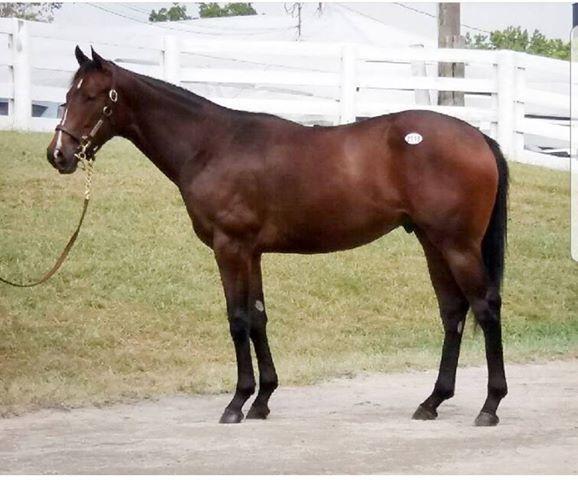 Despite the positive response from Geoffrey’s breeders, the idea of reaching out to big time racehorse owner out of the blue intimidated me. My mind instantly wandered to things like “what if he wants him back?” or “what if he’s just plain old mean to me?” Those negative thoughts were quickly quenched by a few glasses of red wine (do you sense a pattern here?) and I went down the rabbit hole of social media and found his owner. On his Facebook page I found pictures of Geoffrey and a post asking for name suggestions (high five and thank you to Matt F. for not letting them name him Jimbo Rocket).

From there I typed up a message to introduce myself, tell them how he was doing, and how much I was enjoying him and quickly hit send before I could chicken out. A few days later I got a message back from Frank, his former owner, saying he wasn’t on Facebook much, but he always wonders if his horses end up in good homes. He told me I made his day, left him with a smile, and that he hoped I would keep him updated.

As intimidating as it was to reach out to the people in his past, I’m glad I did. One of the things I love about Thoroughbreds is that they all have a past full of trainers, owners, riders and grooms who cared about them at some point and who most likely still do. Even when it’s been many years, people still remember the details — like Marcus’s breeder who told me that after almost 20 years, he’s still the only yearling she ever had to muzzle while ponying (which I get because he’s annoying and basically an alligator with fur and hooves). I know Geoffrey’s breeder, owner and trainer had high hopes for him as a racehorse and would have loved for him to still be running this year. However, even though he wasn’t quite cut out for that, I hope they find some pride in the fact that their horse is making someone like me happy in a second career. 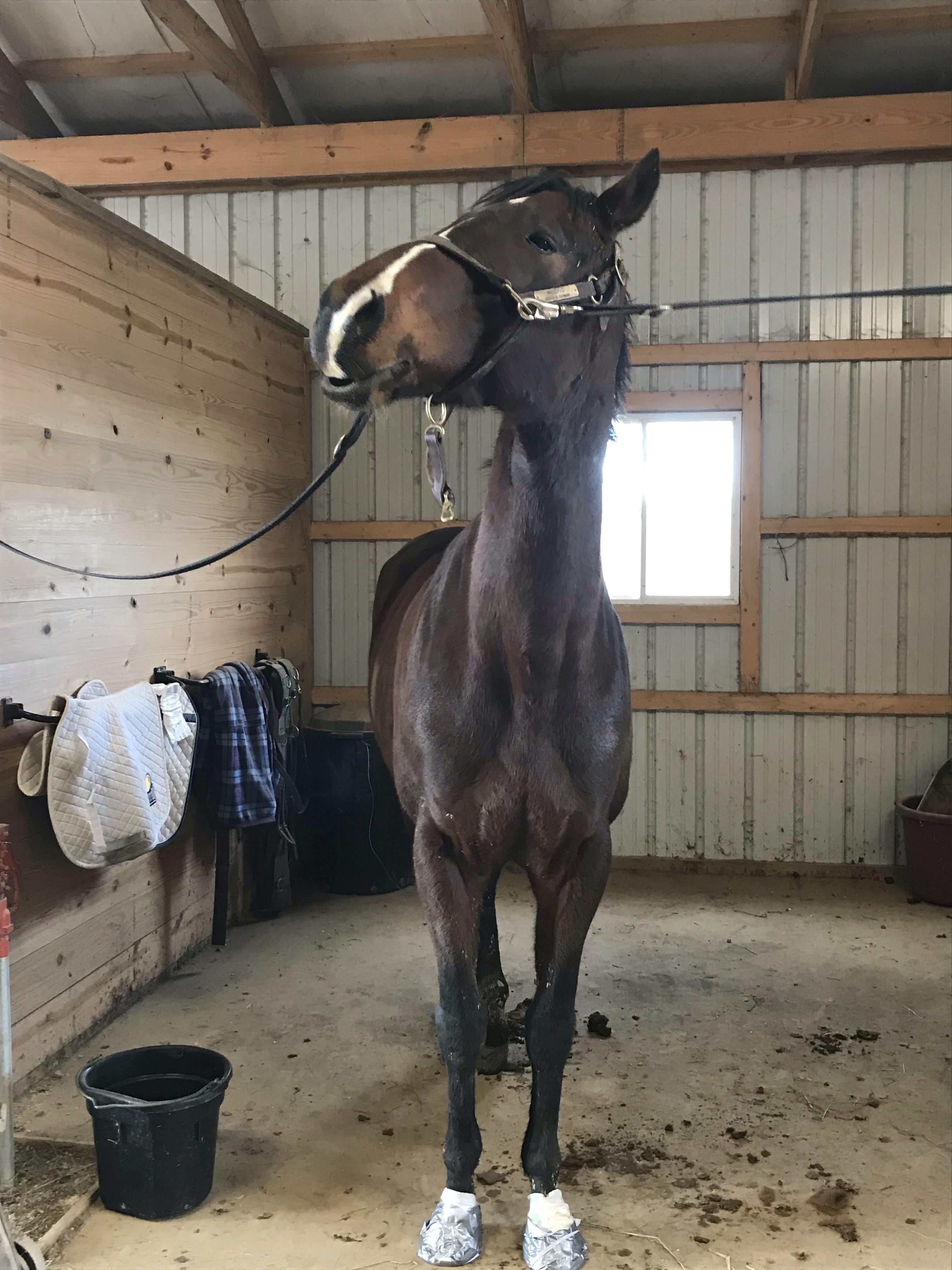 Geoffrey’s thoughts on all this mud.