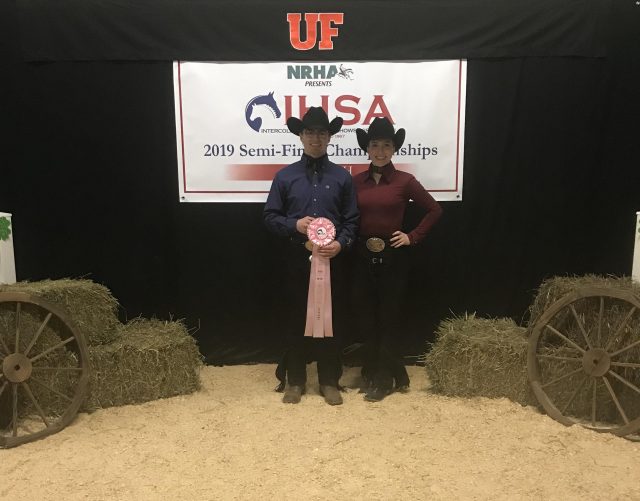 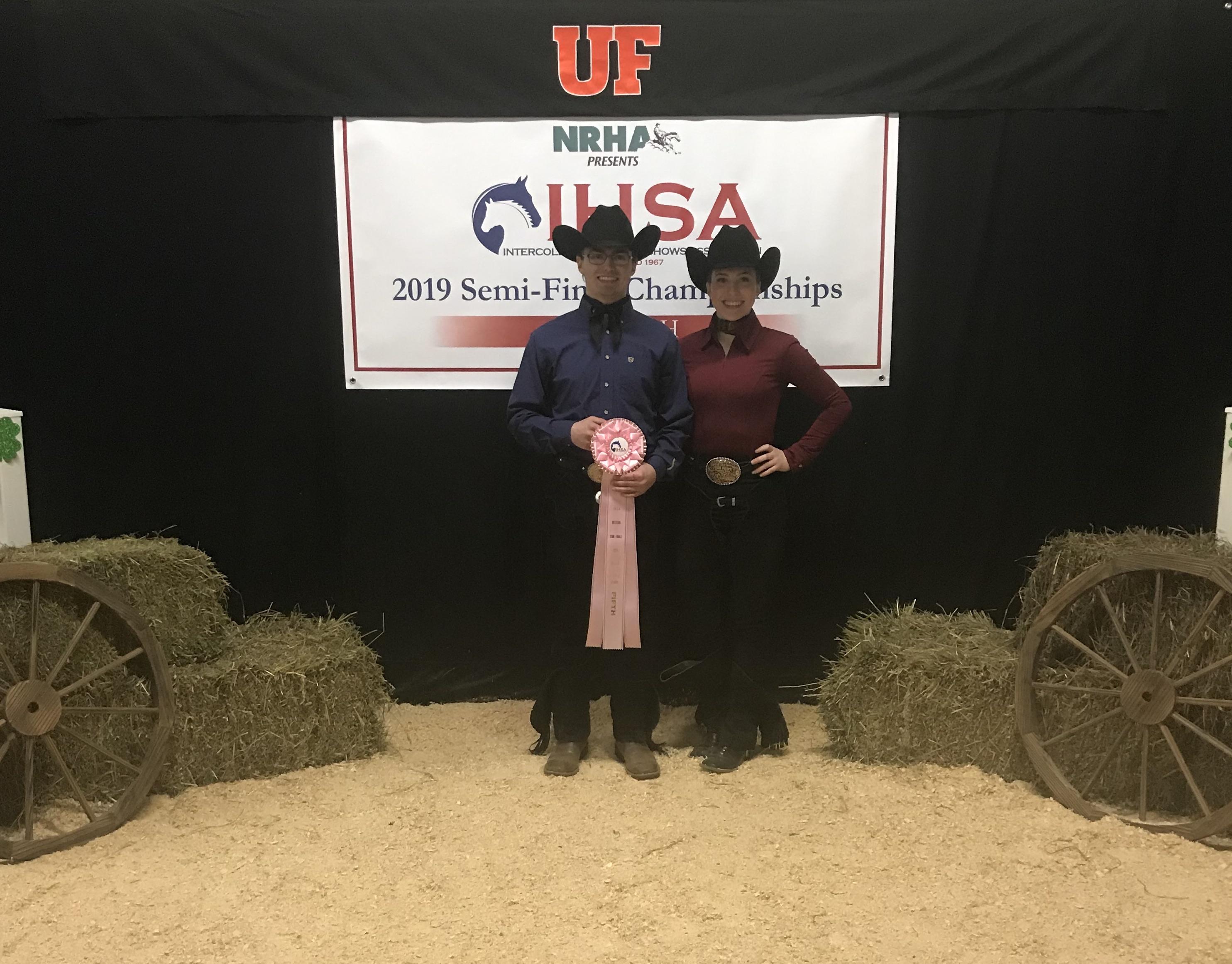 Haley and her brother Kolby. Photo by Taylor Soderholm

After a long weekend at my last IHSA Semi-Finals, I want to reflect on what made my collegiate riding experience memorable: watching and supporting my teammates, and being supported by them in turn. The format of riding as part of a team is exclusive to this type of show, and although at first it was disorienting to be part of a team in a sport usually geared towards individuals, cheering on my teammates was the highlight of my last show ever with them.

My own placings this weekend were disappointing, but I can’t find it in myself to dwell on that when I think of how proud I am of my teammates. They all overcame challenges to make it to Semi-Finals, and I would like to introduce each of them. They are all incredible role models for me, and I learn from all of them every time we show.

Going in order of division, my teammate Kristie Wagner won the Individual Advanced Horsemanship this weekend. Those of you who know Kristie and how talented a rider she is may think that this victory is a routine one for her, but two weeks ago she was in a hospital bed with a lacerated liver, bruised lung, and bruised ribs from being kicked. I visited her in the hospital the day after she was transported by ambulance, and the first thing she told me was that she still wanted to show at Semi-Finals (right after she complained that the doctors hadn’t let her eat in thirty hours). She made an appointment to get a scan the Friday before the show and, against all odds, it came back clear enough that her doctors allowed her to ride. She came back from not being allowed to move out of her hospital bed to having the courage to get back on a strange horse for the first time and have two flawless rides, winning her competitive class and qualifying her for Nationals.

If Kristie’s scan had not shown improvement, my teammate Sydney Popovski would have shown in her place, but she had the incredible grace and sportsmanship to step down and let her teammate show when Kristie’s results came back clear. The courage it took for both of them—for Kristie to ride again so soon after having a severe accident, and for Sydney to come all the way to the show and then step aside for her teammate—is something I aspire to find within myself.

In the Team Advanced Horsemanship, my teammate Taylor Soderholm had a beautiful ride, falling in love with the reiner she drew. Despite learning how to ride western only three years ago, Taylor has risen through the divisions all the way to Advanced her senior year and more than held her own against riders who have ridden western their whole lives. She is a force of nature and a class act in and out of the arena, hiding her nerves under an unfaltering layer of confidence. In addition to being one of the strongest riders on the team, she never fails to lift her teammates up and make sure they have everything they need, whether it be a helping hand with horsemanship makeup, a chap extender off of her own chaps, or a cup of tea for a sick teammate.

From Taylor, I have learned the incredible poise it takes to succeed in the horsemanship arena—I point her out to all of my nervous first-year teammates as an example of ring presence and the importance of looking confident. She has taught me that trying something new can be rewarding if you work hard at it, and that I always have a friend at the barn and a shoulder to lean on.

In the Individual Novice, my teammates Becca Scalen and Catie Donahue both showed class and elegance despite this being their first time showing at that level in Western IHSA. Becca, like Taylor, began as a hunt seat rider and proved that riding both western and hunt seat makes for a stronger horseman. Catie, a sophomore, made her Semi-Finals debut and showed sportsmanship in being proud of her ride regardless of placing.

My teammate Emma VanDyne showed in the Team Novice and Individual Intermediate divisions. Emma, an Open hunt seat rider, started riding western only last January and has made incredible progress in the last year, learning both horsemanship and reining at a pace I didn’t think was possible. She constantly seeks new learning opportunities, asking questions and soaking up every moment of practices and shows, never settling for “good enough.” I try to answer her western questions, and she always has my back on the hunt seat team. Emma is a beautiful rider in both disciplines and had some of her best rides yet at Semi-Finals, and will be one to watch in both show pens in the coming years. She is constantly aware of what’s going on with the team and is the first to step up and offer help, a role model and one-woman support group who proves the stereotype of cattiness in the horse industry wrong.

Julie Barr, a sophomore we also stole from the hunt seat side last year, made her Individual Intermediate Semi-Finals debut this weekend and made callbacks for a fifth-place finish, one place away from making Nationals with only two-years’ western riding experience. Despite her small frame, Julie’s martial arts experience and unwavering composure while riding make her a force to be reckoned with. She can sit any wild maneuver without batting an eye, and her sense of humor never falters in any situation, no matter how stressful. I try to emulate her coolness and ability to navigate any experience with a laugh.

One of two first-years to show this weekend, Amber O’Toole made her debut as the Intermediate Team rider. Coming in with a competitive spirit and a lot of talent but little horsemanship experience, Amber has worked in and out of the arena all year to become a better rider, and it paid off this weekend as she put points on the board for our first team class of the day. She overcame nerves at having to represent her team at Semi-Finals as a first-year to ride a beautiful pattern, and held the team together for the rest of the show with her constant positivity and sportsmanship. Amber also leads the team in fashion choices, from a flawlessly put-together show ring presence to the iconic sweatpants-and-cowboy-boots look that she rocked on the car ride home.

Vanessa Virgilio, a senior on the team, earned a fifth-place spot in the Beginner division. She has an injured foot and has changed from a walking boot to her cowboy boots countless times, working through the pain to practice and work out in preparation for Semi-Finals. As an Athletic Training student, Vanessa has been a source of athletic knowledge for the team and showed her strength in the show pen, laying down a strong ride on a horse that was pulled from the walk-jog class prior to hers because he wouldn’t jog, but she got through the pattern without breaking and proved her ability to make the horse perform.

One of the rides I am most proud of from this weekend was that of my little brother, Kolby Ruffner, in the Team Beginner class. Having only started riding this fall (after giving in to my constant begging for him to join the team), he has made great progress and held his own in a tough class. At his first horse show outside of Alfred, he remained absolutely unflappable despite his horse not wanting to jog, and trying to stop and say hello to spectators at the gate, staying focused and never quitting until he got the horse to follow his aids. He earned a fifth-place ribbon, putting points on the board for Alfred on a difficult horse.

My teammates, coaches, and family sustained me through this horse show, and they challenge me to improve myself every day to be more like them. As the end of my four years competing on a team draws to a close, I would like to thank every one of them that taught me something about riding and about myself. They made all the late nights, early mornings, and challenging rides worth it, and have picked me up when I couldn’t do it myself. I owe them everything, and could never hope to repay the experiences and kindness they have shown me.