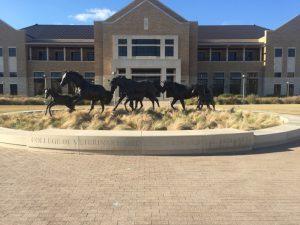 The adventures of SmartPak’s sponsored vet student Cheyenne Sams continue, with a trip to Texas A&M Veterinary School for the annual wet lab. Cheyenne details what she learned here!

Whenever we go to veterinary meetings, we always meet lots of vet students. These are some of the nicest, smartest, and poorest people we know. So we said to ourselves: what if we sponsored a vet student? And that’s how Cheyenne Sams, a 3rd year veterinary student at the University of Illinois College of Veterinary Medicine, came to be the first-ever “SmartPak Vet Student Class Rep!”

On Saturday, January 19th of 2019, the Student Chapter of the American Association of Equine Practitioners at the Texas A&M Veterinary School hosted hundreds of veterinary students from schools all over the country to attend their annual wet lab. They had about twenty labs for students to choose four to participate in. When I arrived to the veterinary school with two other Illinois students and one student from Missouri, we saw the beautiful veterinary school that Texas A&M has. We were told that it is a relatively new building, and it was fantastic – fireplaces in an indoor study room, outdoor study spaces, relaxing courtyard, and the list goes on.

The first lab that I participated in was on alternative medicine. We learned about acupuncture and even got to practice placing acupuncture needles! However, first we had the opportunity to place an acupuncture needle in our own arms (so that we had a better idea how it feels for the horse) in a point that was supposed to be relaxing. I wasn’t able to push the needle in as far as it was supposed to go for my arm (it was weird placing a needle into my own skin), but I did better than I had anticipated I would be able to do! Placing needles in the horse were so much easier, and I definitely think that he became more relaxed during our session, because he dropped his head lower and lower. Alternative medicine has been growing in popularity and I am interested in pursuing some of these techniques following my graduation from veterinary school.

My second lab was all about hind-limb lameness. There was an equine veterinarian from Texas that enjoys lameness that was there to teach us about different ways to look for hindlimb lameness – what sorts of things he looks at when he is looking for lameness in the hind end – stuff like hip hike and drop, and also the fetlock drop. He also talked about various hind limb flexions that we can perform in order to help focus the lameness to various aspects of the limb. The best part was that we were able to watch two lame horses jog (trot) so that we could figure out which limb was lame and also practice our flexions.

Catch up with the rest of Cheyenne’s day at the SmartPak blog!