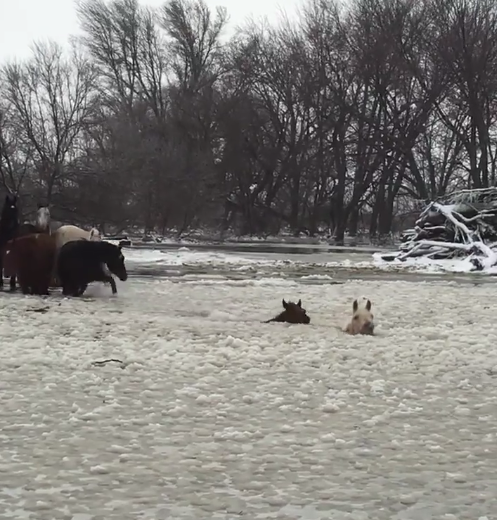 Rapid melting of frozen ground and rivers along with inches of snowpack combined with heavy rain from a winter storm that had already created blizzard conditions in the Rocky Mountain states to create dangerous conditions. Flood protection systems including dams and levees were overwhelmed; bridges were washed out and ice dams created backup and rapidly-rising flood waters.

Entire towns were isolated, surrounded by floodwaters; other residential areas saw 6-7 feet of water where there were once roads and lawns. In rural areas, rising waters stranded livestock on “islands;” some stock could be evacuated but others had to shelter in place. Ranchers report feeding their animals by airboat until flood waters could recede. Many animals will likely be lost.

Horse owners are not exempt from this disaster; viral imagery is all over the internet of horses being evacuated or rescued from their farms and ranches or standing trapped in barns in standing water.

These horses self-rescued in what was certainly a scary situation, stranded by a rising creek. According to the video description, all of these horses eventually made it to dry ground, are in good health and doing well.

We have not found any official equine-specific disaster relief funds that have been earmarked for Midwest flood victims at this time, but we will continue to watch for such efforts. Nebraska Farm Bureau Foundation is collecting donations for farmers, ranchers and rural communities affected by the flooding.

Our thoughts are with all of those affected by these conditions in the Midwest.

[Historic Flooding in Parts of Nebraska, Iowa and South Dakota Due to Rare Confluence of Meteorological Factors]

[No, Winter Isn’t Over. Hitting the Plains: A Flood and a Blizzard]