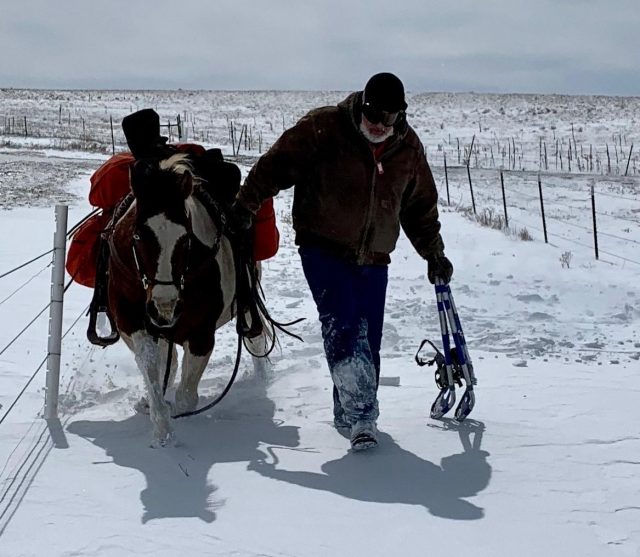 When Dr. Dale Rice’s patients needed him after last week’s intense blizzard in Colorado buried the roads in snow and abandoned cars, he strapped on his snow shoes, loaded up his horse, and headed out.

“Colic” is one of those words a horseowner dreads to hear. If you board your riding partner, somewhere deep inside is a tiny prick of fear every time your phone rings and your boarding facility’s number pops up on caller ID.

“Blizzard” is another one of those oft-dreaded words.

So when your boarding facility calls you to say your sixteen-year-old heart horse is colicking right as you’re watching the weatherman talking about the bombcyclone of snow outside, there’s a recipe for disaster.

The perfect storm… for heartbreak.

Callea Sherrill of Elizabeth, Colorado, had to endure that nailbiting scenario just last week, when the Midwest was hit with one of the worst blizzards in Colorado’s recorded history. Moisture-heavy clouds from the south met an arctic cold front smack dab in the middle of America’s heartland, and, as the barometric pressure bottomed out to the lowest ever in Colorado, everyone knew they were in for one helluva ride. 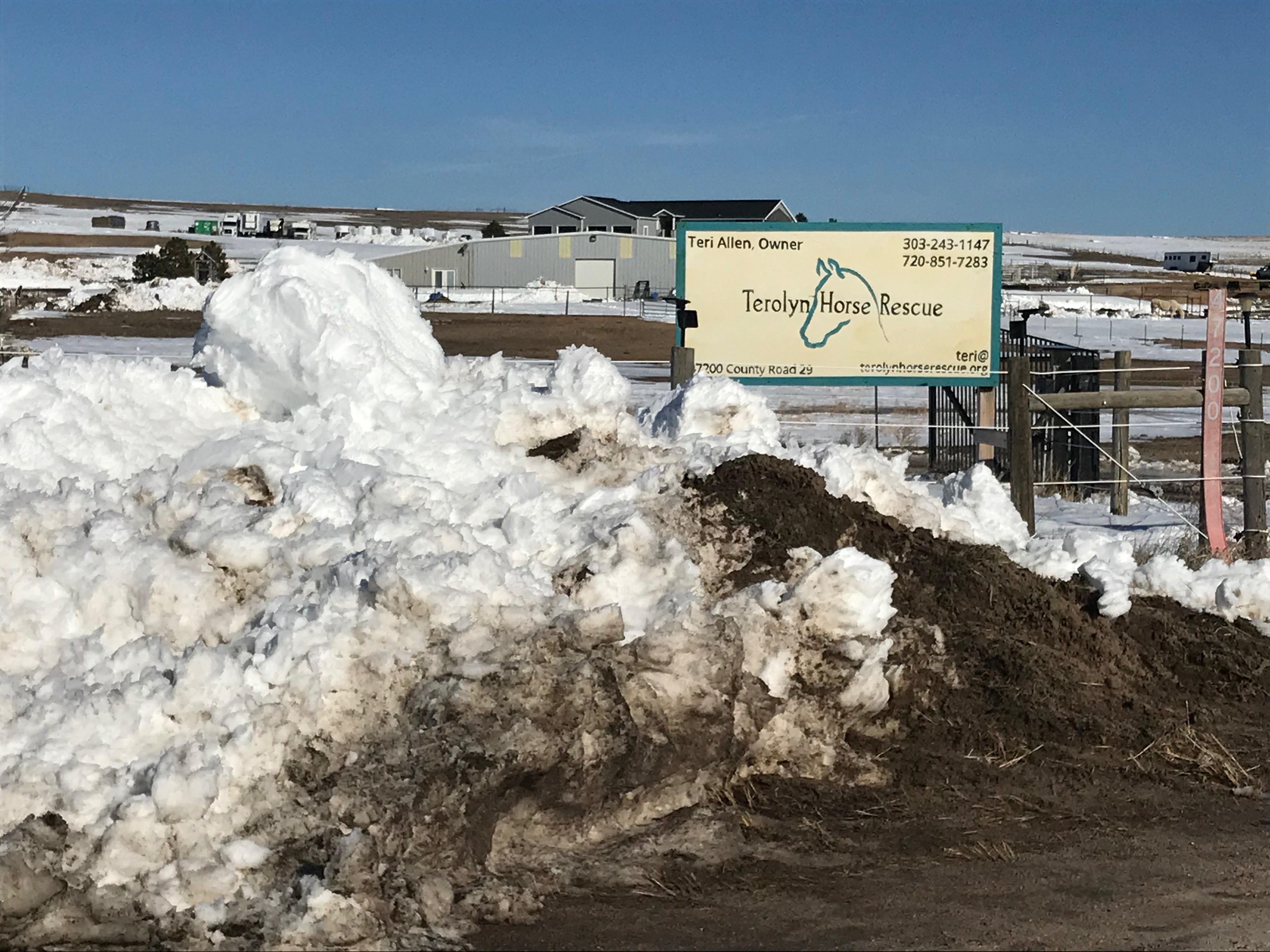 For two days before the storm hit, Teri, her husband, her daughter, and the volunteers rushed to prepare the farm and the horses as best they could. When the storm arrived, it came in fast and furious, featuring wind gusts up to ninety miles per hour. The snow fell at the rate of nearly two inches per hour for hours on end.

The bombcyclone struck so fast, in fact, that drivers all along the main road in Elizabeth had to abandon their vehicles and be transported to safety by emergency and rescue personnel. This left a string of cars blocking the road, and the snow quickly buried them. Unbeknownst to anyone at Terolyn Farm, they were now cut off from the world.

Next morning, as the Allens climbed through snowdrifts six feet high to check on all the stock, they miraculously found only one serious injury — one of the rescue horses, Artex, had somehow gashed his knee. Artex’s knee needed sutures, but Teri decided to wait to call their local vet, Dr. Dale Rice, until they had seen every horse. To triage Artex’s knee, Allen, a seasoned horsewoman, wrapped the knee with a feminine hygiene pad and used duct tape to hold it in place. With Artex’s bleeding stopped, the Allens moved on to the next barn.

There, they found Red.

Red was huddled, miserable, in his shelter, showing all the classic signs of colic: gassy, pacing, biting and kicking his abdomen. 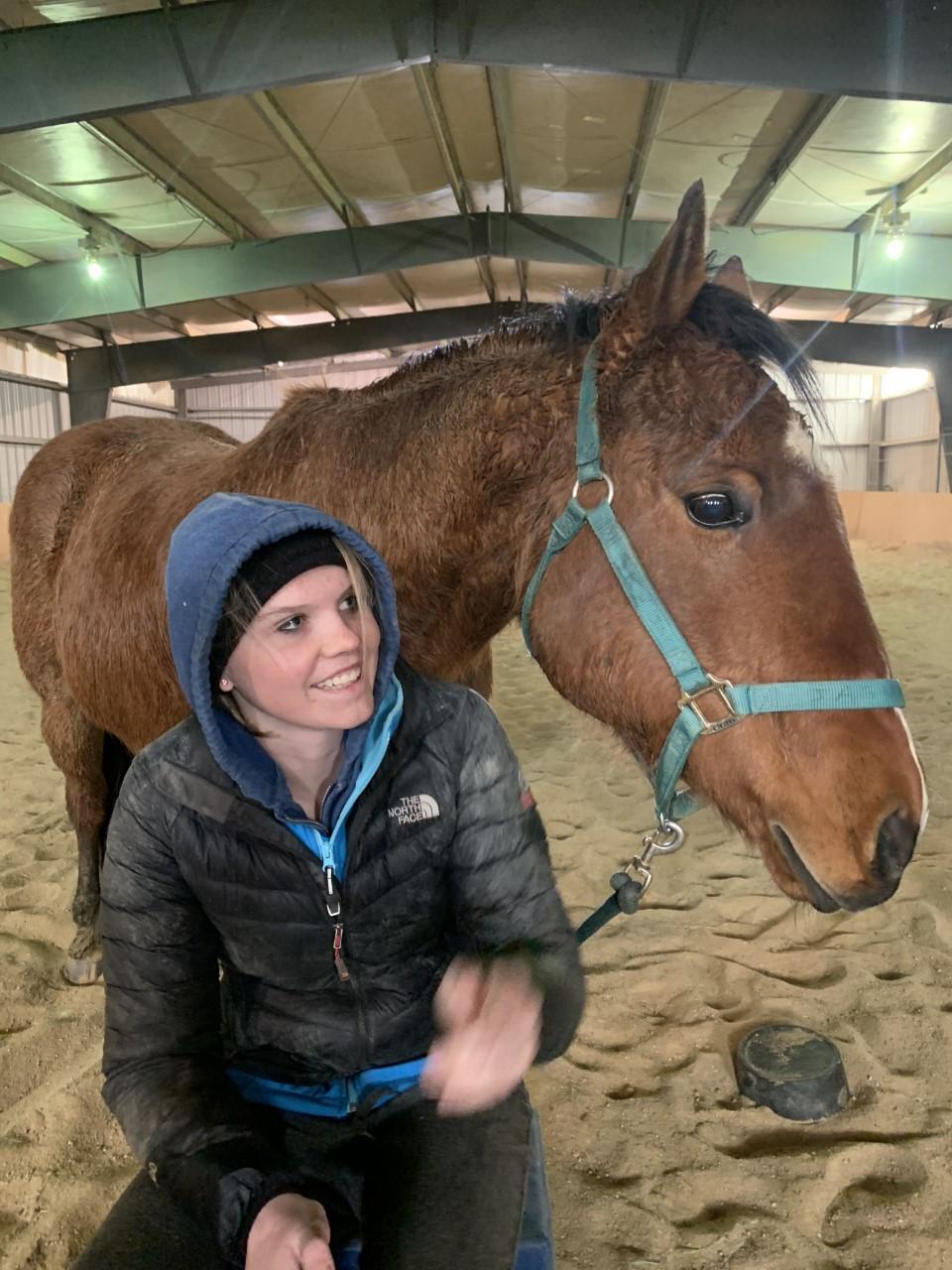 Ryann immediately began walking Red to keep him moving and keep him from going down to roll. She gave him a little banamine to help with the pain.

Teri Allen made two phone calls. The first was to Red’s owner, Sherrill. Sherrill was heartsick at the thought of her “heart horse” so sick. “I was so upset, knowing how serious colic can be, and knowing I couldn’t even get out of my driveway, let alone to the barn. That line of cars that had been buried in snow was blocking the main road and the whole town was at a standstill. But I trust Teri and Ryann. I knew they would do everything possible to help Red, and I all I could do was wait and pray.”

Allen’s second call was to their local vet, Dr. Dale Rice. She told Rice about Artex needing sutures, and about Red. Both Allen and Rice knew time was of the essence on the colic case; both professionals also knew travel was impossible.

Sherrill recounts the issues: “It’s a few miles from the farm to Rice’s home and clinic. There was no way to load up Red and take him to Dr. Rice. And there was no way for Dr. Rice to drive out to the farm. I was so afraid it was hopeless for Red.”

But a little later, Rice called Allen back and said, “Awesome Promise is all loaded up, and I have my snowshoes and ski goggles.  I’ll be there as soon as I can.”

Allen called Sherrill and assured her, “miraculously, help is on the way.” Sherrill, isolated at home and unable to get to her horse, was overcome. “I just sat down and wept.” 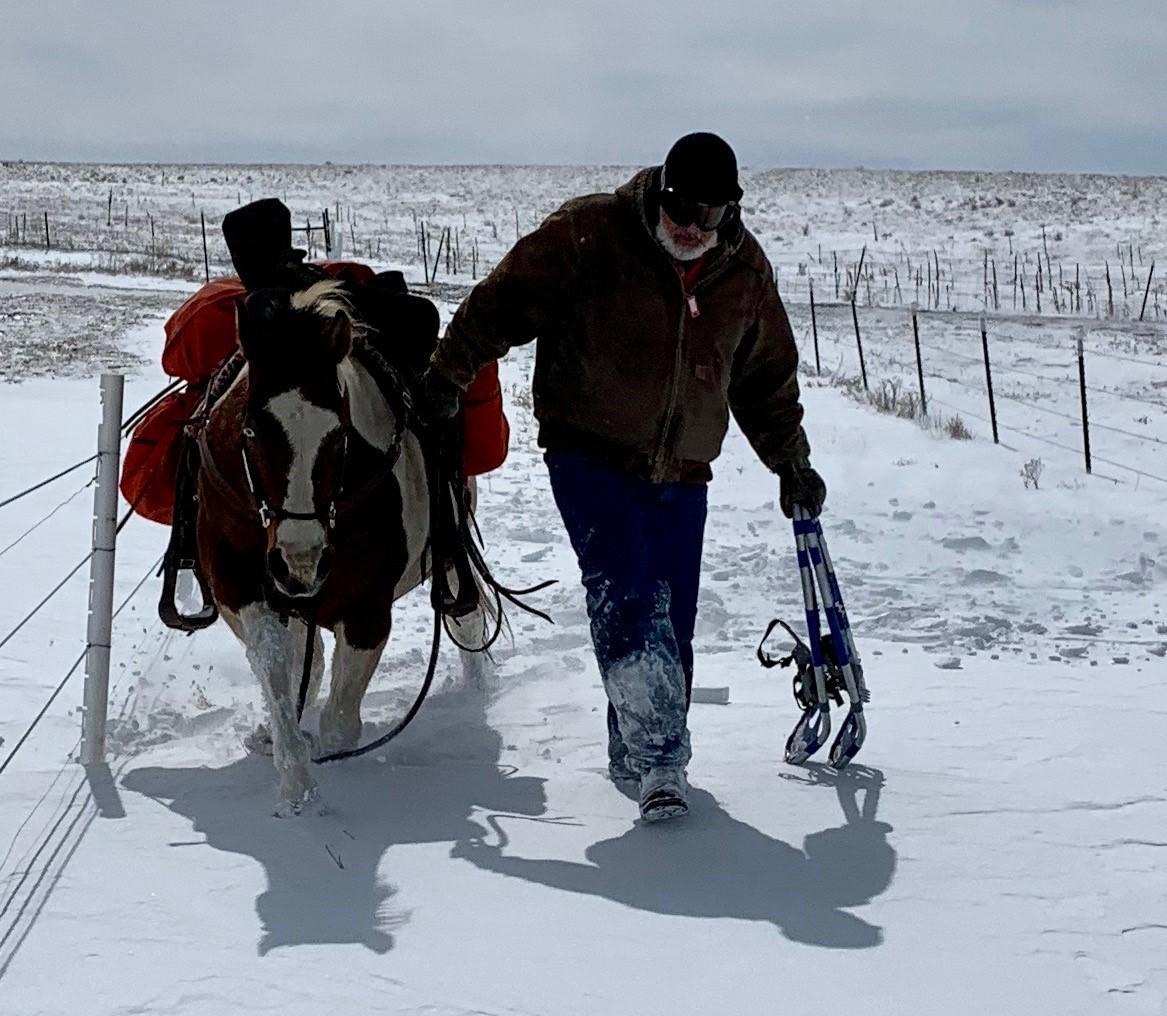 Using his favorite saddle horse as a pack-ambulance of sorts, Rice trekked the miles from his home office to his snowbound patients. 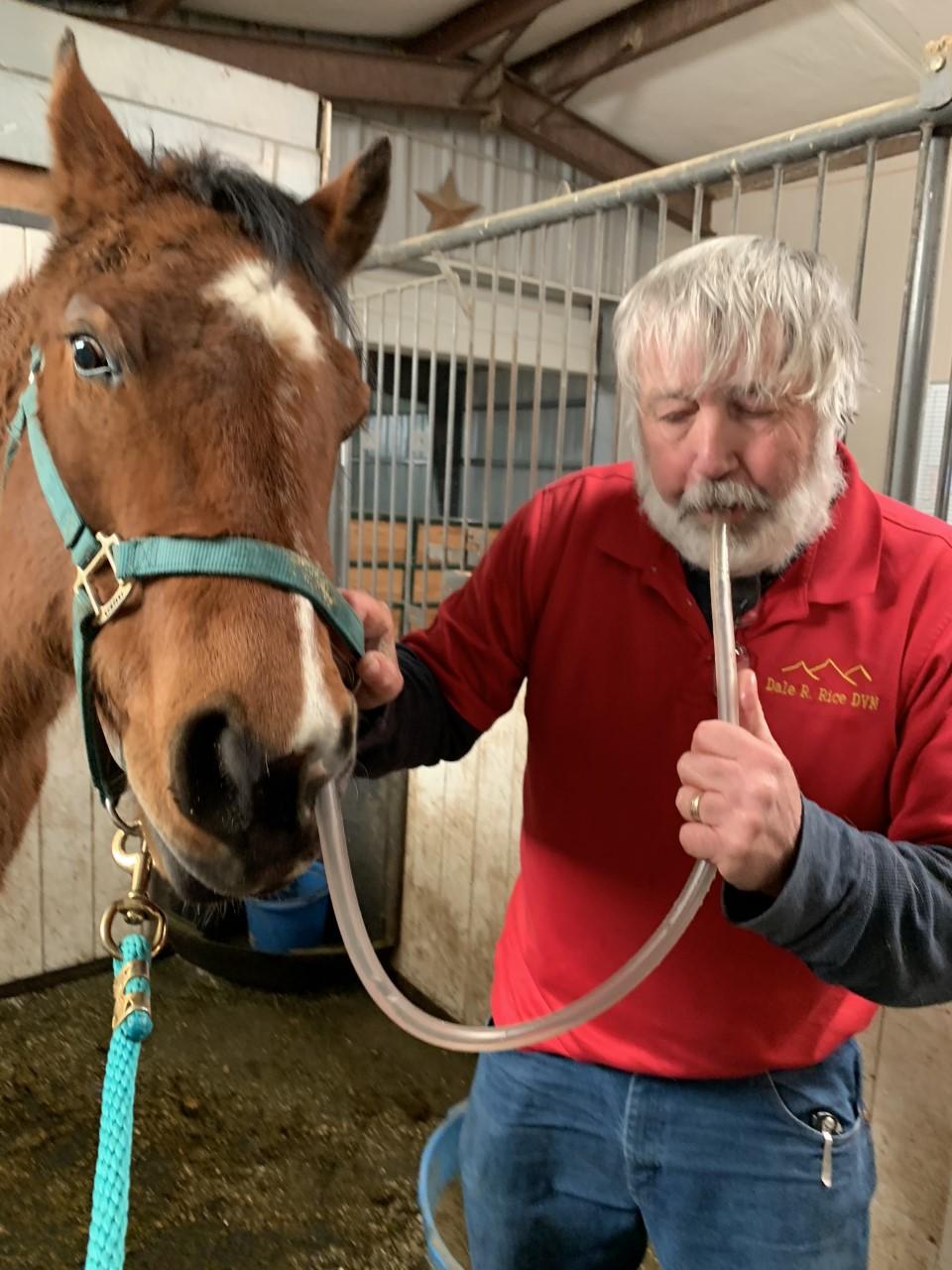 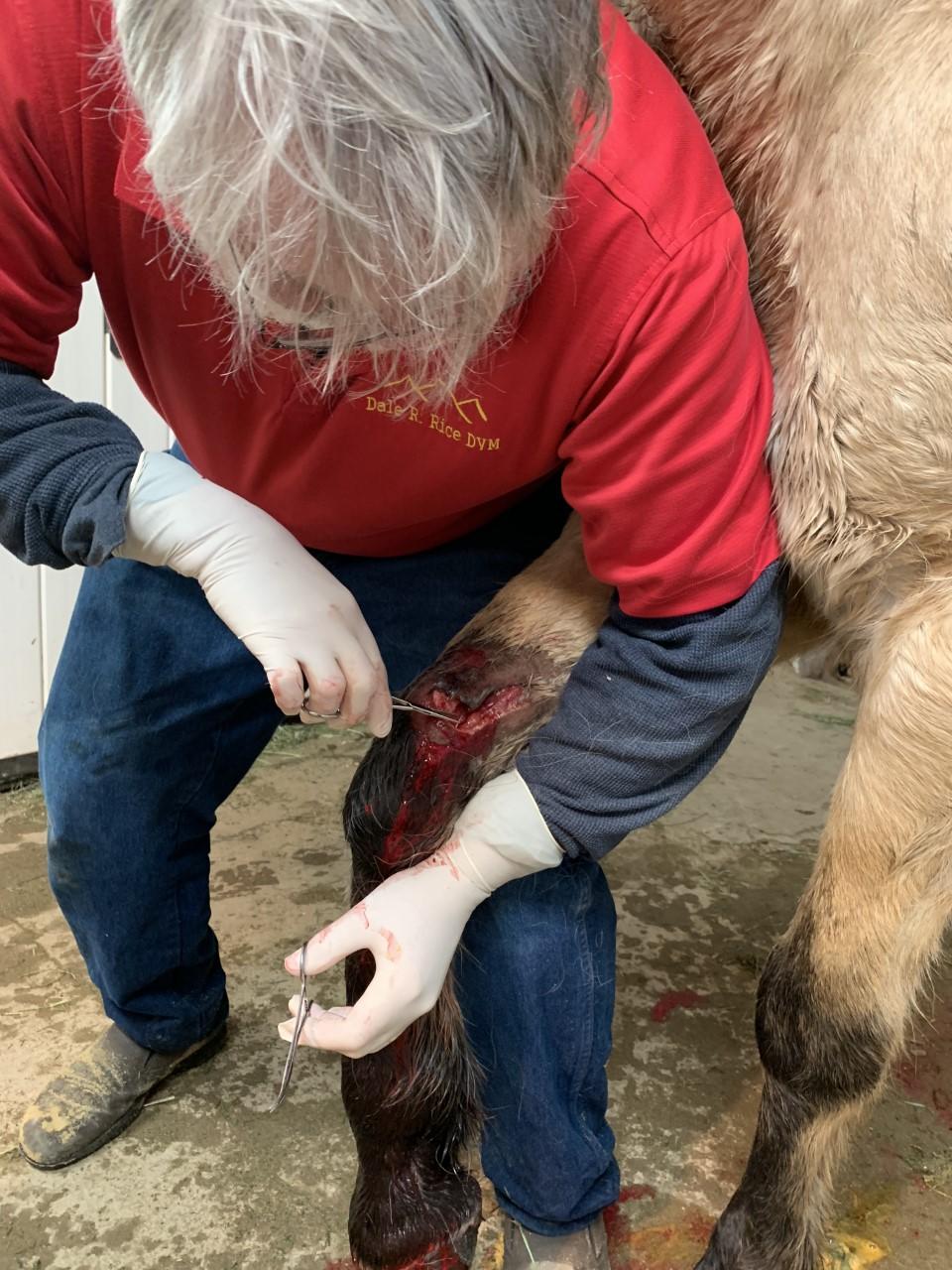 Less than ten years ago, Dale Rice chose veterinary medicine as his second career. For many years he wore a suit and was a corporate executive, until, one day, he simply decided to follow his heart. He quit his job, chucked the suits, went to vet school, and set up shop in Elbert County, Colorado — the very rural section of the state that is home to Terolyn Farm. 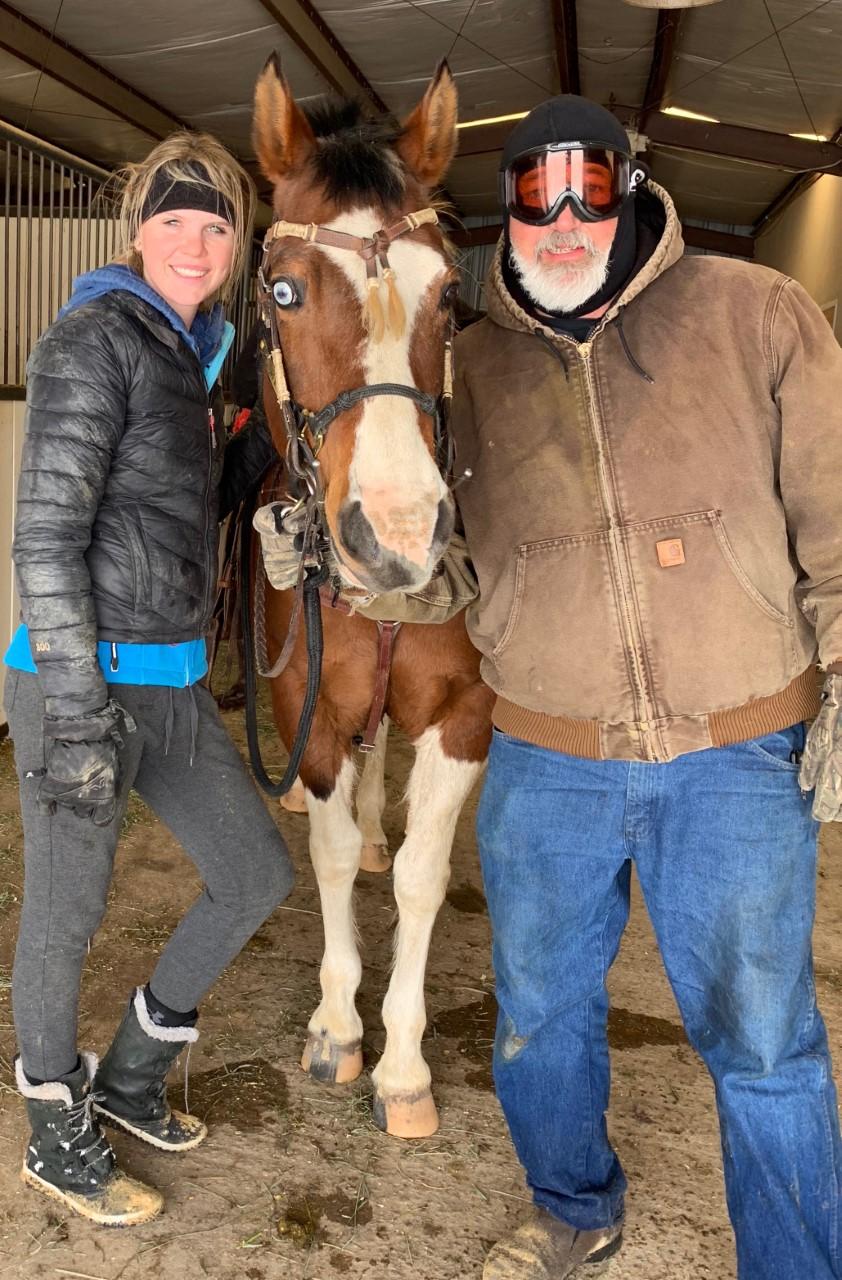 To expedite the trip home as a courtesy to Awesome Promise, Rice left his materials at the farm and mounted up for the ride home. 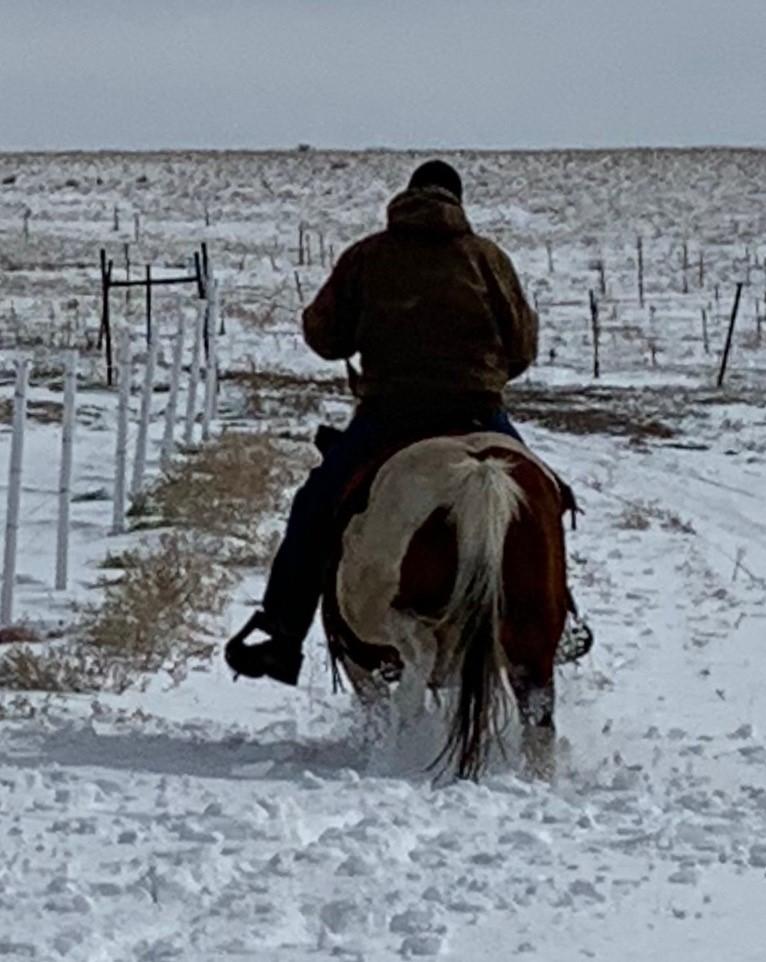 Shortly thereafter, Teri Allen was able to call Red’s mom and deliver some great news: “We have poop!”

Overjoyed and full of gratitude, Sherrill posted a few photos of “Doc Rice” on social media to thank him for his heroic efforts to save her horse. Rice, a humble and gracious man, neither expected nor wanted any recognition or notoriety, but, like Sherrill, we here at Horse Nation believe great news is worth sharing.

So we salute you, Doc Rice, for your dedication to your profession, and the phenomenal determination and resourcefulness you exemplified to help horses who were hurting. You are a healer, and a hero.