Today’s honoree: The Donkey Sanctuary of the UK.

Every Friday, Horse Nation teams up with Ovation Riding to spotlight an individual or organization doing good work in the horse world. Today, we’re recognizing The Donkey Sanctuary, based in Sidmouth, Devon.

The organization launched unofficially in 1969, when Dr. Elisabeth Svendsen purchased a donkey she would come to call “Naughty Face.” Naughty Face soon got a friend. Then Svensden attended a local livestock auction and was appalled at the condition of donkeys there; she began purchasing those in the worst condition and established the official charity in 1973. Naughty Face remained the matriarch of the herd of rescues.

Through the 1970s, the Donkey Sanctuary expanded, establishing its first educational/therapeutic programs as well as taking its first international trip. In the 1980s, the sanctuary built its own donkey hospital, as well as rescued its first donkey from Ireland. International programs expanded to nations with working animals, including Mexico and Kenya.

Donkey-assisted therapy programs were launched in 1994 and continued to expand, as well as the total number of donkeys rescued — the Donkey Sanctuary rescued its 5000th donkey in the ’90s, followed by its 10,000th donkey just a few years later (aided by expanding sanctuaries in multiple countries across Europe). Dr. Svensden passed away in 2011, but her legacy continues through expanded education, rescue and advocacy worldwide.

The Donkey Sanctuary has grown into one of the largest and most respected organizations for the welfare of longears in the world. Learn more about the myriad of programs and locations, plus the details of the good work the Donkey Sanctuary does by visiting the organization’s website and following on Facebook. 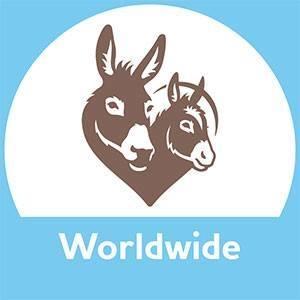