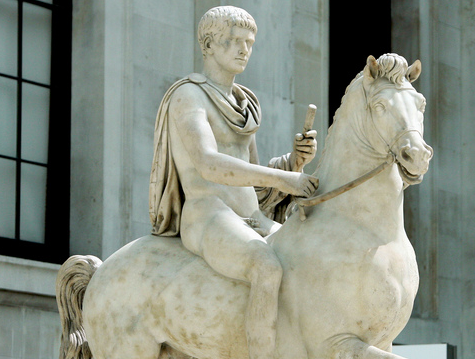 “Caligula’s excessive devotion to Incitatus is one of the things that historians use to prove his insanity. But if treating your horse better than you treat politicians is a sign of insanity, then how many of us are guilty?” 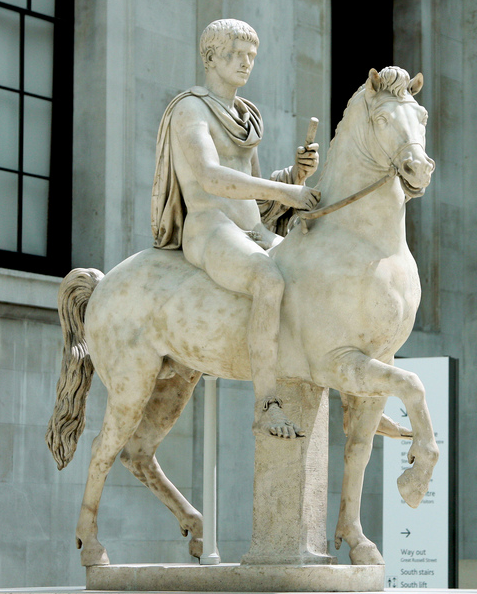 The phrase “pampered pony” probably calls to mind images of cute little Welsh ponies with braids toting around little girls with ribbons in their hair. It may call to mind trite sayings about Mrs. Astor’s pet horse or flashbacks to playing with My Little Ponies. But one image the phrase likely does not conjure is a racehorse standing in his stall in the shedrow.

Caligula was actually a nickname, meaning “little boots,” which Caligula earned as a boy toddling around his father’s army camp in teeny tiny army boots. Let me just warn you now: anyone who is known exclusively by their childhood nickname past the age of 18 is likely more than a little bit insane.

Caligula was no exception to this rule, and he has gone down in history as one of the crazier of the Julio-Claudian emperors. His greatest hits include: incest with his sisters, replacing the faces of statues of the gods (and goddesses) with his own image, waging war against the sea (because hey, who doesn’t want to stick it to Neptune?), and spending excessive amounts of money on pleasure barges. Basically picture Jeff Goldblum’s character in Thor: Ragnarok and you’ve got an older version of Caligula.

But for all of Caligula’s eccentricities, one of the things that is best known about the emperor is that he was a serious horse lover. He was a chariot racing fanatic and was particularly devoted to the team known as the Greens.  He even owned his own racehorse, Incitatus. It is said that Caligula, objecting to the horse’s original name of Porcellus (little piggy), gave him the name Incitatus (fleet-footed) himself. It will never not be funny to me that a Roman Emperor named his racehorse Speedy. Incitatus must have been the Boaty McBoatface of his time.

According to the ancient sources (Dio and Suetonius), Caligula took great pains to make sure that Incitatus was housed in style. His stall was made of marble and his manger of ivory. He ate oats flaked with gold (I like to picture poor Roman peasants panning through his manure). And the day before Incitatus raced, Caligula would station soldiers of the Praetorian Guard outside of Incitatus’s stable with orders to make sure that everyone in the vicinity stayed quiet so the horse could rest undisturbed. I particularly like to picture a muscle-bound guard, rebuking a mother with a crying baby, “Shut that baby up! Don’t you understand that Incitatus needs his beauty rest?”

This lavish treatment extended even beyond the stable. He was dressed in imperial purple (a color expensive to make and reserved exclusively for royals) and he wore breast collars and racing harnesses dripping in gemstones. This horse was pimpin’ long before the gangsta rappers ever studded their canes in diamonds.

As if those luxuries weren’t enough, Caligula bought Incitatus his own house and equipped it with furniture (for people and horses) as well as a retinue of servants (human). This horse had his own slaves. Why, you may ask, would a horse need a house? The answer is simple: so he could entertain. Yes, you read that right. Incitatus would host parties at his bachelor pad. Big pimpin’ indeed.

The luxuries and honors didn’t stop there. Caligula made Incitatus a priest and promised to name him consul (the lead position in the Roman government after emperor, highly coveted by senators). Making Incitatus a senator is, in fact, one of the things for which Caligula is most notorious. I love to picture him saying, “And now I introduce to you… the noble senator Incitatus” in his best “let’s get ready to rumble voice” only to have the senators sit there white-faced and wide-eyed as a horse (decked out in a purple toga and a laurel crown) clip-clopped into the Senate House. Sadly, Caligula ran out of time. He was assassinated by members of his Praetorian Guard around the same time as he promised to make Incitatus consul. 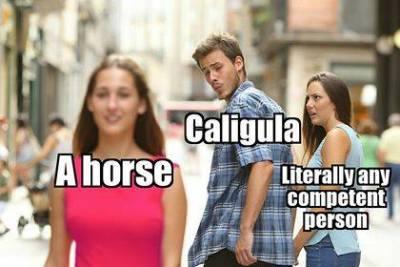 Many modern historians believe that Caligula’s appointment of his horse as a senator was a way to mock the senatorial Roman elite and say that the job was so easy even a horse could do it. But I like to think that Caligula genuinely thought Incitatus would be the best man for the job. Either way, it’s clear that Caligula thought more of his horse than he did of the senate. And it was this contempt for the senate that led to Caligula’s early demise. I’m not sure that I’d be willing to die for honoring my horse. In fact, I’m pretty sure that’s not a sword I’d be willing to die on. Hank can live without earning a seat in the House of Representatives.

Caligula’s excessive devotion to Incitatus is one of the things that historians use to prove his insanity. But if treating your horse better than you treat politicians is a sign of insanity, then how many of us are guilty? And who’s to say that Incitatus wasn’t a stellar priest and wouldn’t have made one heck of a senator?

No one knows what happened to Incitatus after Caligula’s assassination. I find it hard to believe that the Praetorian Guard would have let him live after having suffered the indignity of having to serve as a horse’s personal do not disturb sign. But maybe one of them took pity on him. And maybe he lived out his days in a stable outside of Rome, giving the neighboring pigs a disdainful look, as he remembered his glory days and snorted indignantly about having to live in such reduced circumstances.