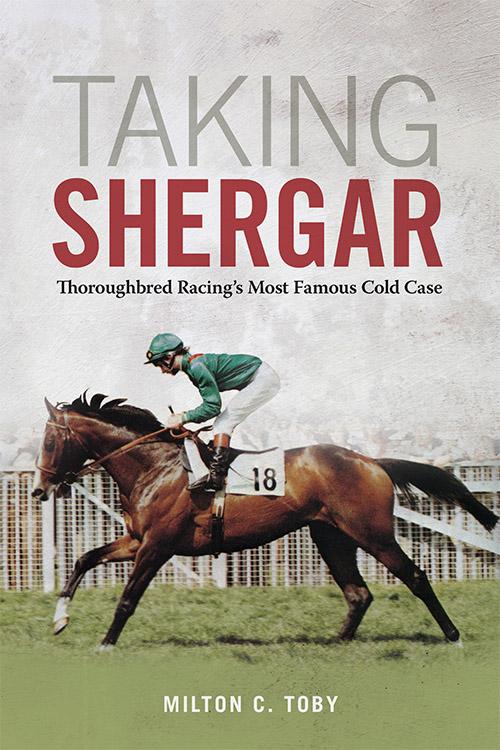 On a February night in 1983, a group of armed thieves entered the barely-guarded Ballymany Stud in Ireland and stole the 1981 Epsom Derby winner, a stallion named Shergar owned by the Aga Khan IV. They demanded ransom, which was never paid. The horse was never found, suspects were never positively identified and a motive was never discovered — though many were suspected. The cold case is one of the most notorious in racing history.

I knew just the barest bones of this story going into this book — the “legend” of Shergar’s abduction was always a St. Patrick’s Day staple on Horse Nation, though our story was sadly lacking in detail… mostly because the details are largely unknown. I expected that the book would be an engaging mystery, sort of mirroring the notoriety with which we view the story today, several decades later. What I did not expect was how emotionally gripping I would find the tale of Shergar’s abduction, one facet of a country in strife, a heartbreaking story of loss magnified to a national scale.

Milton C. Toby’s exquisitely-researched book opens in an empty stall. Shergar is missing, and the horse’s owners who are present — some of the members of his syndicate — are scrambling to decide what to do. Mindbogglingly, law enforcement was not contacted for eight hours after the horse’s theft, giving the thieves a massive lead to get away without pursuit.

Toby jumps back in the timeline to the development of the Aga Khan racing and breeding operation, started by the Aga Khan III — the grandfather of the Aga Khan IV. Initially, I didn’t quite understand why we had gone back so far in time to the 1920s and ’30s, but by the time Shergar himself was back on the page, I understood Toby’s mastery with a greater knowledge not only of the bloodlines of the Aga Khan racing stable but the climate around Irish breeding, the national disappointment when so many of the great stars were sold to American stud farms or stood outside of Ireland. For Shergar, an Epsom Derby winner, to stay in Ireland was a point of national pride to a people who revered the horse.

My original, ignorant assumption that the stealing of Shergar was just a headline, a notorious story we think about today to say “oh, how wild that was!” was rapidly disabused as Toby illustrated the political tension and guerilla warfare in Ireland in the second half of the twentieth century. The Troubles were in full swing — a period of history I knew embarrassingly little about, despite having visited Ireland in the past few years. The entire history is a bit too complex for me to summarize here, but the short version is that the Provisional Irish Republican Army, or “Provos,” took a radical stance to British military presence in Northern Ireland, needing a constant source of funding to pay for weapons. To get this funding, the Provos often turned to kidnapping for ransom.

While the Provos and the IRA were never proven to be responsible for Shergar’s disappearance, the general belief seems to be that they are responsible. Shergar was never found, despite plenty of leads and some unique, even bizarre investigation (psychics are involved. True story). It’s a story to which we all already know the end, but most likely, few of us know the beginning or the middle, and Toby masterfully researched dozens of angles, presenting the story in great detail and painting a portrait of just how difficult of a case this would have been to solve at the time. My only complaint is that the timeline and various characters can sometimes be a bit hard to follow — there’s a wide cast at play throughout this story, and characters are introduced and then left for chapters at a time.

This was not a book that cheered me up. I closed the cover upon finishing and felt somber, even perhaps mournful, for this horse I had never met nor even seen in video, an innocent victim in the greater clashes of a country deep in strife. I think I understand now how the horse lovers of Ireland might have felt at the time.

Taking Shergar is a fascinating read for anyone who loves a mystery, loves history, and loves racing. It’s a story steeped in tragedy, but an important look at a troubling time and a great mystery in racing history. The book is available from University Press of Kentucky.