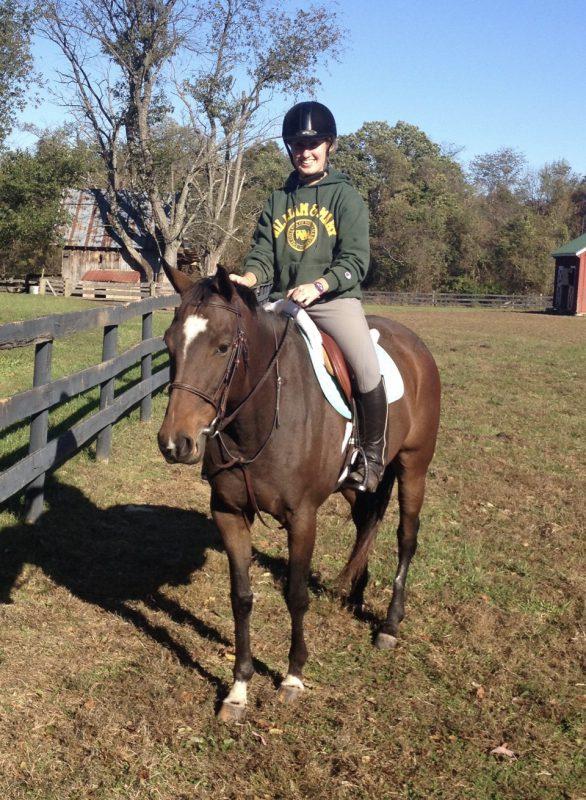 From the SmartPak blog:

Whenever we go to veterinary meetings, we always meet lots of vet students. These are some of the nicest, smartest, and poorest people we know. So we said to ourselves: what if we sponsored a vet student? And that’s how Cheyenne Sams, a 3rd year veterinary student at the University of Illinois College of Veterinary Medicine, came to be the first-ever “SmartPak Vet Student Class Rep!” For her first blog, we thought we’d let her introduce herself:

I’m originally from Bluemont, VA. I’ve known I wanted to be a veterinarian since I was in kindergarten. For the longest time it was because I liked animals and just wanted to help them. When I was 7 years old my parents bought me a large pony named Eddie (an Arab/Welsh) that I did Pony Club with, rode in the local hunter shows, and even had the opportunity to swim with in a lake. When I was a freshman in undergrad, Eddie passed away due to colic. From that point on, I realized that one of my reasons for becoming a veterinarian is so I can help take care of people’s horses so they can have the time and opportunity to form the kind of bond that Eddie and I had shared. I think that the bond between an animal, especially a horse, and a human is one of the most unique bonds that there is because there is a huge trust component with it that other relationships don’t always have.

I went to undergrad at the University of Virginia and graduated in 2016 with a B.A. in Biology. For extracurriculars I volunteered at the local SPCA and also at a horse barn working with children and horses. I enjoyed mentoring to the children and watching their comfort level grow with both the horses and the other volunteers from school.

Applying to vet school was stressful — working your hardest to get the grades that you did during undergrad and then sending them off to schools to judge them and decide if you should receive an interview based on the paper-version of yourself. When I read the letter saying that I had an interview at the University of Illinois College of Veterinary Medicine I had a moment of disbelief, then I felt pure excitement that a school wanted to get to know me better, and then I had a feeling of horror when I realized that this meant that I had to interview with a panel of THREE people at school! Waiting to hear back about my acceptance was even worse than waiting to hear about an interview, but when I finally got that letter, I nearly cried with joy.

Read the rest of Cheyenne’s blog at SmartPakEquine.com!